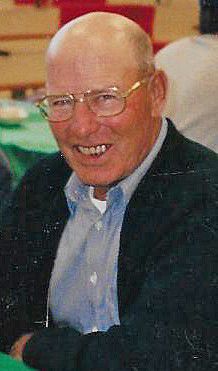 Tom was born in Miles City, on Jan. 29, 1932, to Fritz and Maretta Zook. His parents brought him home on the 20th of February, the last few miles in a sled because there was so much snow on their side of the divide. He joined his older sister Margaret (Hoff) and his brother Johnnie. Six years later little brother Bill was born. Dad was a rambunctious boy! He became ambidextrous after running his right arm through the Maytag wringer washing machine.

Tom started his education at the Leonard Section one room school and graduated from CCDHS in 1950. He had jobs delivering papers and dry cleaning so knew every street of Miles City. He was captain of his football team and named all state as a quarterback and linebacker his senior year. Tom loved every minute of it. He excelled in baseball. He was known for throwing wicked curve balls becoming the leading pitcher in American Legion Baseball in 1949.

Tom joined the Navy. He was sent to Hawaii where he worked as an aviation mechanic. When his father died, Tom returned to the ranch. His paternal grandparents were pioneers in Montana and Miles City. Tom was a steward of the land all his life, with the Zook ranch reaching centennial status. He especially loved good dogs, horses, and alfalfa seed crops.

Tom got great pleasure playing his guitar at country dances all over eastern Montana. He couldn’t read a lick of music but taught himself to play guitar when he was 12. His Gibson guitar that he hauled to many country dances and played many hours at home, was a graduation present from his aunt and sister. Nearly every night we kids went to sleep in the basement listening to Dad play the guitar. Music was a great source of comfort to us all.

Tom married Isabel (Tootie) Cameron on April 15, 1958. Tom was an extraordinary father to seven children. He raised his kids firmly and lovingly. Dad was so pleased when all his kids earned college degrees, something he did not have the opportunity to do. Dad and Mom were a great team, and he loved her tenderly, caring for all her needs the last few years. The bar has been set. Thank you, Dad.

Tom served eight consecutive legislative sessions. It was an experience beyond his expectations highlighted by serving as Chairman of the Appropriation’s Committee and the Senate Finance Committee. He was known for diplomacy, integrity, and bi-partisan leadership. He thrived on problem solving all his lifetime, and served as a PCA director and a CCDHS unified school board member.

Tom had lung cancer and he and his children wish to thank ALL the caregivers and hospital cooks he has had. His last couple of weeks in the Holy Rosary Hospital and St. Vincent’s Hospitals were special to him. He was kind towards all he met and they reciprocated with loving care. Tom had great faith and was prepared when he died Jan. 23, 2018.

Visitation will be held on Friday, Jan. 26, 2018, from 5–7 p.m., at Sacred Heart Catholic Church. A Rosary will be held at 7 p.m., followed by a Vigil Service at 7:30 p.m., at the church. Mass of Christian Burial will be held on Saturday, Jan. 27, at 2 p.m. at the Sacred Heart Catholic Church in Miles City. Rite of Committal will follow in the Custer County Cemetery with full military honors. Condolences may be sent to the family by visiting: www.stevensonandsons.com.