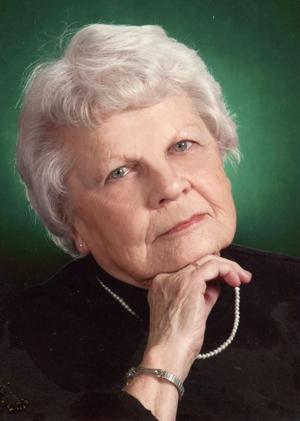 Elizebeth Ellen “Betty” Riley was born in Aberdeen, South Dakota, on Aug. 19, 1924, the fifth of seven children born to Jack and Olive Barger. Betty passed away on Jan. 2, with family members by her side.

Betty enjoyed performing as a majorette in her youth, traveling to compete in national competitions. She loved her childhood memories and frequently told stories of growing up with her siblings. After graduation from high school in 1941, she wanted to remain in Aberdeen to attend the Presentation College School of Nursing, but her family didn’t have the money to send her. The head nun helped Betty’s father enroll her in the Army Nurse Corps through a program funded to increase the number of nurses during World War II. At 18, the program took Betty to Miles City, where she started her training. The Army also employed Betty to do radio spots to recruit other women to the program. In 1942 on a bowling outing with classmates in Miles City, she lost control of her bowling ball and it nearly hit Jack Riley, a local soldier. The two began dating before Jack left for combat in Europe. Betty graduated from Presentation College with a nursing degree in 1945, and Betty and Jack were married in 1946, after his return.

After graduation, Betty worked at St. Vincent Hospital in the polio ward caring for patients in the iron lung unit. When Jack returned from the war, he began a career with the Montana Highway Department, and they raised a family in the eastern Montana towns where Jack was stationed. Betty and Jack had four children: Ron, Joyce, Dave and Linda. She was an attentive working mother who put all of her nursing knowledge to work in the care of scrapes, cuts and burns. They lived in Circle, Fairview, Sidney, Glendive and Lewistown, where Betty found work as a medical surgical, operating room, obstetrics and clinic nurse. Jack and Betty finally settled in Billings where Jack retired in 1982. Betty began working once again at St. Vincent Hospital where she served as a surgery nurse and then as a geriatrics nurse. At 4 feet 11 inches, she held her own with any surgeon or doctor. Altogether, Betty served eastern Montana as a nurse for 54 years. After retirement, she continued to serve in St. Vincent’s Senior Services department as a volunteer.

Betty loved to play bridge, travel and spend time with her family. She made it her personal mission that no ducks went hungry on Yellowstone Avenue. She enjoyed playing her piano, was always game for shopping, and loved having her hair done. Her trips to Michigan to visit Ron’s family were always a joy (and she was always excited when the Michigan family came to Montana to visit). Betty also experienced the Montana Honor Flight in April of 2013, visiting the World War II Memorial in Washington, D.C.

She loved holding babies and had a special connection with her generations of grandchildren who affectionately called her Mimi. She had quite the sweet tooth and was always quick to share her chocolate or Lifesavers. She gardened with her grandchildren and took them for walks. It was a rite of passage to finally grow taller than Mimi. When her grandchildren began having children, she told them about walking herself to the hospital in Miles City to deliver Linda “because that’s what you did back then.” Even after her memory began to go, the presence of children brightened her day. She enjoyed giving them small gifts, including the cookies she’d been saving for them from the dining hall.

Betty Riley began a life of service in 1941. She touched many lives through her work and brought great joy and laughter to her family. She was loved, and she will be missed.

She was preceded in death by her husband John D. “Jack” Riley; son Ronald (Marlaine) Riley; her siblings Alice Albrecht, Phyllis Swanda, Jean Freer, Jane Fogarty, Jack Barger and Carol Herman; and her great-granddaughter Paige. She is survived by her son David (Sue) Riley of Billings, and daughters Joyce Riley of Helena and Linda (Pete) Olsen of Molt; as well as 16 grandchildren, 30 great-grandchildren, and three great-great-grandchildren.

In lieu of flowers, memorials can be made to the charity of your choice. A memorial service will be held at 2 p.m., Thursday, Jan. 11, at Dahl Funeral Chapel, 10 Yellowstone Ave., in Billings.