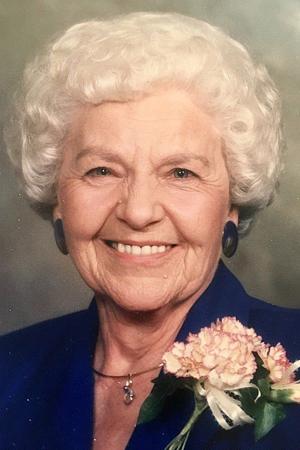 Elaine Newton Etchart passed to her Heavenly Home on Sept. 30, 2017, with her husband Gene at her side, just short of her 96th birthday.

Margaret Elaine Newton was born in Hobson on Oct. 23, 1921. She was the eldest of William “Bill” and Annie McClellan Newton’s four children, arriving ahead of brothers Kenny and Dean and sister Donna. The Newton family spent their early years in Hobson, where Bill had mail routes and developed a trucking business, hauling dirt and aggregate as highways were developed in the area.

Elaine’s father moved the young Newton family to Glasgow in 1933 and opened the Hudson Terraplane dealership amid the busy days surrounding the construction of the Fort Peck Dam. Elaine loved people, sewing and music. She was a drummer in the proud kilt-clad Glasgow High School marching band (a band of about 90, which required four buses to transport), graduating from Glasgow High in 1939. She became an accomplished pianist and for several years played piano with a ragtime band with friends Bob Rundle, Jack Burgess and others entertaining at “clubhouse dances” in Glasgow, Fort Peck and the surrounding area. All through her life, she could make a piano rock with ragtime favorites like The Twelfth Street Rag, The Entertainer and the Charleston Rag. In later years, she needed to be coaxed, but she could still make the piano dance, to the delight of her family and friends. She worked as a bookkeeper for the Buttrey Department Store in Glasgow at that same time. It was then that she caught the eye of rancher/aviator Gene Etchart, who remembers her first as the “Beauty in the red Hudson convertible with white sidewall tires.”

After the dam construction days, Bill Newton moved his family to Sheridan, Wyoming. Elaine followed them and worked in the First National Bank there. Gene was operating a flying school in Miles City and would fly to Sheridan on weekends as he courted Elaine. The onset of World War II took Gene to Oxnard, California, as an Army Air Corps flight instructor. Elaine joined Gene there after being married in Las Vegas on May 23, 1942, and they lived near various air bases during the war. They moved back to Glasgow to operate the Etchart Ranch. Elaine brought Michele into the world in 1943; John in 1945; Joe in 1948; Janeen in 1951; and Jacque in 1958. Elaine and Gene raised their children as they were building the Hinsdale Livestock Company ranch, which they operated until retirement. Elaine was a devoted wife, mother and partner. Through the ranching years, she was also very involved in St. Raphael’s Altar Society, the American Legion Auxiliary, the local Republican Party and the Montana CowBelles, among many more. She and a group of friends founded the “Chequers” investment club, who recreationally studied the markets and invested in the 1960s and ’70s. And she learned to fly.

She was an artist with sewing and knitting, and sometimes with tile and woodworking. The magnificent needlepoint Christmas stockings she made for all her children, their spouses, her grand and great-grandchildren are precious reminders of her pursuit of perfection and flair for beauty. Gene, all of her children and some of their friends wore sweater jackets she made; sweaters with themes tied to each personality. She also took a great deal of pride in her coin and stamp collections. She loved crossword puzzles, Jeopardy, whist and bridge. She was a very good player.

She was a great mother, always immersed in her children’s and their children’s activities. She enjoyed planning and hosting family gatherings, was a magnificent cook and loved to share her recipes. She was quietly generous, often finding little ways to brighten your day or lend a helping hand.

Mom had an uncommon elegant dignity. She was compassionate, courteous, patient and kind. She was interested in everything and everybody. Mom seldom forgot a name or a face. She always had a warm gentle greeting as she encountered acquaintances, wanting to know what was happening in their lives. You could put her in a room full of strangers, and with her gracious way Mom would soon know everyone’s name and be able to tell you about their children.

Mom touched so many lives in so many tender, graceful ways; she will be dearly missed by many. Gene and his beloved Elaine celebrated their 75th wedding anniversary this spring, and together with the entire family marked their 100th and 95th birthdays in August of 2016.

At Mom’s request, there will be no services at this time; there will be a memorial service later. Rather than flowers, if you are inclined, Mom would have you consider something for the cause of your choice. The Fort Peck Theatre, Carroll College, and St. Raphael’s Parish were among her favorites.