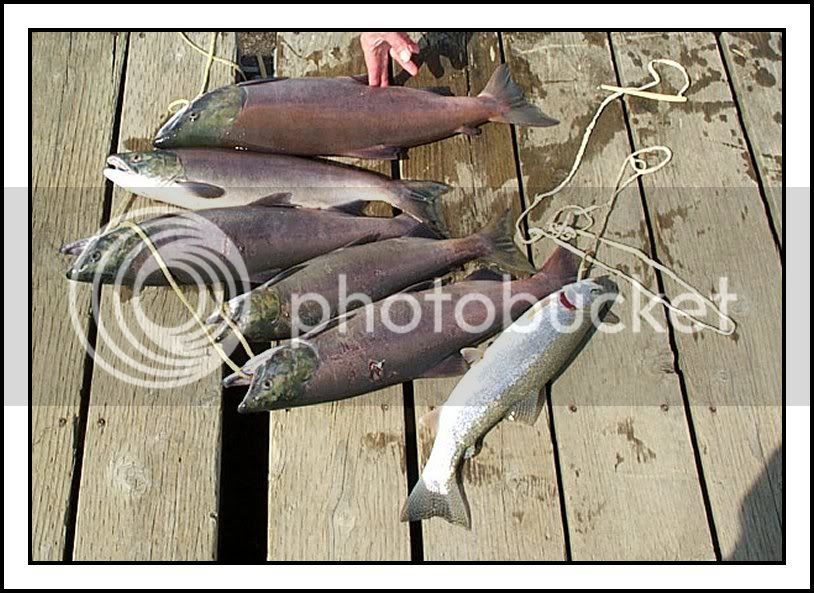 permalink
Top
+0
-0
I would be surprised if that fish survives to "add to the gene pool." Those guys aren't like a trout that is going to find a hole and gain it's strength back after a fight like the one I'm sure it had. Maybe it has a chance to make it, but I highly doubt it, especially with 600 more anglers casting tackle at it. That guy released that fish for one reason...so he could keep fishing!

On the flip side, some old woman or kid might be able to land that thing now that's it's exhausted.

By the way...the size has nothing to do with it's age. They are all the same age when they return to spawn. He just had a bigger appetite than his siblings. And they are all delicious...especially when they are coming up the Kenai where thay have only been in fresh water for 10 min. or so. At the very least, one could smoke that baby!

Hal...those are some nice sockeyes!

[This message has been edited by mule train (7/27/2009)]
permalink
Top
+0
-0
founder
supporter
sponsor
>> I would be surprised if that fish survives to "add to the gene pool."

I was kind of surprised to see pictures released of it being held out of water like that. It's a citable violation of regs to remove a King from the water and then release it. For all their size, they are pretty delicate creatures when removed and manhandled like that. In one of the photos I saw the fish being grabbed by the tail, manhandling like that causes a fish serious damage/harm.


There's a picture here of Les Anderson with the 97lb 4oz King he caught back in the 80s.
http://www.sf.adfg.state.ak.us/Trophy/


Yeah, there were a couple nice sized Reds in that lot from yesterday afternoon. They were swarming past docks at the entrance to the Lake yesterday - could have caught 5 more and limited out, but we didn't feel like cleaning that many fish.

That's a big Dolly Varden too. It doesn't look so big next to the salmon, but it gave Susan a good fight before she got it into the net. I don't understand why Dollies don't get more respect - they are fighters.
permalink
Top
+0
-0
that is a nice dolly!
permalink
Top
+0
-0
Speaking of large fish - look at this ugly thing:

I'm not sure what you mean Bob?

These are what we have around here:
http://www.adfg.state.ak....olly_v.php
permalink
Top
+0
-0
Speaking of fish...here is a pic of a red fish I caught in Sarasota last weekend:

permalink
Top
+0
-0
supporter
This begs the question.....did you fillet up that bad boy, dip him in melted butter, sprinkle cajun seasoning on the fillets, then throw them into a cast iron skillet on the grill at about 600°F???
permalink
Top
+0
-0
Unfortunately red fish are out of season right now.Even if they were...that guy was too big. Legal size limit is up to 27 inches, he was around 33. Not complaining though...the regs are allowing for fish to get bigger. The florida state record is around 55lb. Hopefully in a few years...we'll be catching 30lbers.

We did catch some triple tail that the captian kept for his own dinner. We didn't keep any ourselves as we were not at the condo this time around, but rather the Hyatt...which by the way sucks.
permalink
Top
+0
-0
My mistake Hal. Bull Trout(like we have around here) and Dolly Varden are both char, but they aren't the same fish. I don't know where I got the idea they were one in the same.
http://library.fws.gov/Pu...ltrout.pdf
permalink
Top
+0
-0
founder
supporter
sponsor
Bob, brook trout are also a char - fish nomenclature is confusing.

I'm still not sure the true relationship between Atlantic & Pacific salmon.

And I just read the other day that following genetic testing. biologist now consider steelhead to be salmon. I always thought they were a variety of rainbow. But then maybe bows are actually salmon?
permalink
Top
+0
-0
Actually - that FWP article I posted gets into the confusion between Bull Trout and Dollies.
As for fish nomenclature - reminds me of goldeye vs shad.
permalink
Top
+0
-0
supporter
A steelhead is a salmon instead of a sea-running rainbow? Boy, that flies in the face of everything I ever thought. Especially since steelhead run back to the ocean. I want to call BS on that one.

Little known fact. Everyone always thinks that rainbows (a California native trout west of the Sierra Nevadas) is an introduced trout in Montana, but there actually is a native rainbow trout to Montana. To wit, the native inland redband rainbow trout which resides in the Yaak River in northwestern Montana. My understanding is that that particular species is not really a native rainbow, but a land-locked steelhead that became landlocked several centuries ago due to some cataclysmic geologic event that produced something (landslide? falls?) that prevented its ancestors from swimming back to the Pacific Ocean, which lead to Montana's only native rainbow trout species.

Mule, I suspected as much. In 1996, I pounded the red fish, but had to let them all go, as they were all outside the slot limit.

permalink
Top
+0
-0
SPONSORED
founder
supporter
sponsor
Bob,
I hadn't known that bull trout were char until I read that article.

This item states that steelhead are still considered the anadromous form of rainbow trout, that's what I always thought too:
http://www.naparcd.org/st...dtrout.htm

But then this item states that steelhead are in the same genus as Pacific salmon (Oncorhynchus).
http://www.nwcouncil.org/...elhead.asp

According to that "infallible" source Wiki, Atlantic & Pacific Salmon, trout, grayling, char, and certain whitefishes (including ciscos and sheefish) are all members of the Salmonidae family, so maybe the distinction is moot.

As far steelhead not necessarily dying after spawning . . . other anadromous Salmonidae also return to the sea including some species of char and Atlantic salmon.
permalink
Top
+0
-0
Post new topic Reply to topic
Support for our troops
Words of Wisdom From Glenn Beck