Dog Pooh!
Chad
David Schott
Richard Bonine, Jr
Richard Bonine, Jr
Chad
Brian A. Reed
Steve Craddock
Brian A. Reed
Steve Craddock
Brian A. Reed
cardiocasey
tjh
Post new topic Reply to topic
founder
Spring is officially upon us as of today. For the past week several soccer, softball, and a perhaps baseball teams have begun to practice. I cant tell you what a pleasure it is to have dog pooh all over the ball and on the bottoms of our shoes. The freshly thawed aroma brings tears to our eyes and really makes the hands soft and supple....

Seriously though, please keep your mutts off the playing fields it's truly disgusting and actually does hinder practice and effects the attitude of the players. Have a little respect for the signs- the ones that say, "NO DOGS"! 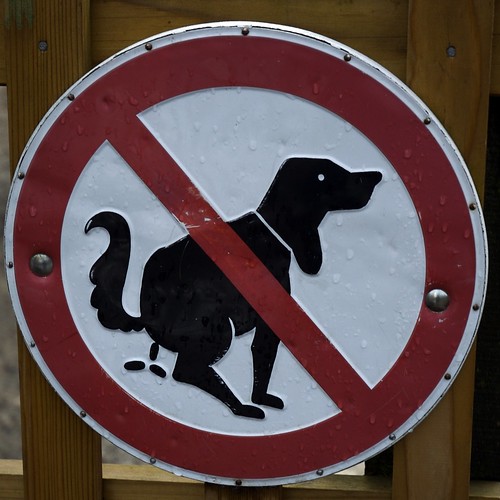 permalink
Top
+0
-0
I love dogs. That said, I hate dog owners who feel that it's perfectly acceptable for their dogs to poo/pooh/poop/crap/take a duke/pinch a loaf/drop anchor/defecate on public property or someone else's private property. If you're going to take your dog out, pick up after it.

Not doing so is tantamount to leaving your child's soiled diapers in another person's front yard.
permalink
Top
+0
-0
supporter
As a dog owner, Chad, I get your point and I very much accept the responsiblity to make sure my dogs' by-products don't undermine anyone else's enjoyment of public premises. But the problem you've raised applies to places besides athletic fields. For instance:

Several areas of Water Plant Park look like Dresden would have if a St. Bernard had been in charge of the firebombing;
and,
For some unknown reason, there is a flower/sod bed right outside the back door to the VA Hospital that is just plain solid dog 'pooh'.

I'm sure there are many, many more examples of dogowners allowing their pets to use public greenspaces as personal comfort stations., much to the detriment and displeasure of the rest of us. And I agree with you Chad - that's pretty selfish behavior.

Truly responsible pet owners carry plastic bags with them to "pack it out" -- or at least take a shovel and a bag once a week or so to clean up the areas their dogs soil on a regular basis. But that's pretty uncommon behavior, which is why you end up with stinky stains on your jersey or smelly deposits on your shoes --- usually right before an important meeting at work.

I think one problem is the "no dogs allowed" rule in City parks. I'm a firm believer in leash laws in places where dogs and people will intermingle. Unfortunately, the current law is very good at preventing the City from providing "doggie dooley" stations (trash cans and plastic baggie dispensers that facilitate responsible poop-scooping by dog owners), but is very ineffective at preventing dogs from entering (and using) the parks. Yet another example where an overly strict regulation exacerbates the very problem it is trying to eliminate (npi).

I think we would all benefit from finding a reasonable compromise where dog owners are able to enjoy the company of their beloved pets as they play in the parks, while at the same time we are able to more strongly enforce rules to keep the parks 'pooh-free' zones and prohibit dogs from accessing athletic fields - which is the one and only place (imho) that dogs truly never belong.
permalink
Top
+0
-0
Several areas of Water Plant Park look like Dresden would have if a St. Bernard had been in charge of the firebombing;

This may be the greatest analogy in the history of analogy. Kudos, sir. Kudos.
permalink
Top
+0
-0
supporter
haha -- now THAT's funny, Brian!

permalink
Top
+0
-0
Good sign it always makes me wonder why people dont keep there dogs in there yards.
permalink
Top
+0
-0
SPONSORED
living on main street and having alot of people walk their dogs around my house. They often stop and take care of things. Its sad when I have two full size dogs and have to clean up only slightly less from the passer bys dogs. I don't feel terrible about having to clean up after them, especially when one of their owners steps in it!! Though I do have a BIG probelm with people who let their dogs take a leak on my lawn orniments, or nephiews trike! One day my lawn Gnome will be hotwired for sparky!!
permalink
Top
+0
-0
Post new topic Reply to topic
Apple Vs. Psystar
Top 20 Posters of 2004