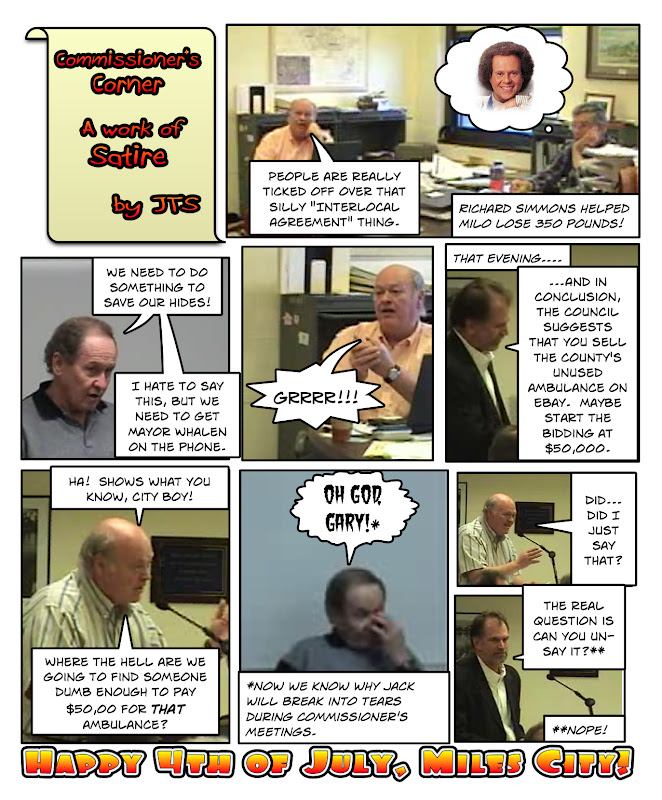 Glad to see you are back with more satire. I look forward to the next edition.

If only Richard Simmons needed an ambulance to haul around his Sweatin to the Oldies videos, wristbands, and tiny silky short shorts.......
permalink
Top
+0
-0
supporter
Nice.
permalink
Top
+0
-0
Most expensive currently listed:
$33,900 buy it now
http://cgi.ebay.com/ebaym....m14.l1308

Looks like $50K is going to be tough to get...maybe another set of commissioners in some other county would consider it?
permalink
Top
+0
-0
Keep up the excellent work JT!

First - the Mayor never forced the Commissioners to do anything. They planned private ambulance for MONTHS, evaded negotiations, and flat out told the City in writing that they (commissioners) are the employer and you (city) are the employee. They further used language like "not negotiable" and refused to negotiate. All the City did was make it clear that they needed to be paid for service rendered. They NEVER stopped ambulance services.

Second - The ambulance only cost $48,500. There were some mysterious "legal" fees which were scratched out of the original invoice, yet paid anyway on a later warrant. There were also some fuel and delivery fees. The total was still under $49,000.

Third - The commissioners did not commit to buy that ambulance until several months later. Roger Hespe did not "go out and find us an ambulance". He sold us an ambulance he had owned for several years already. Furthermore, he owned it free and clear until January this year, when mysteriously he placed a $35,000 lien on it. This was done the day of the big town meeting telling the commissioners NO. Then, we paid for the ambulance in February, the lien clears, and then we get an invoice, which was "doctored"; had line-outs to make the total match the check that was already sent, and then no additional invoice to authorize the other fees which were paid later.

That whole fiasco had everything to do with bovine feces. The Mayor never forced them to do anything; he merely "strongly encouraged" them to return to the negotiating table.

Don't believe me - go look at it yourself. Or you could ask the commissioners - the same ones who put $28,000 (each) in their own pockets without informing you they were doing it - what really happened. I'm sure they will come forward with "we made a deal with Roger to privatize ambulance, roger bought equipment to do it, we balked out of the deal, and Roger's attorney convinced us that we should buy the ambulance and try to cover our tracks instead of getting sued." I'm sure that's the story you'll get - they've been pretty honest about things up 'til now anyway.
permalink
Top
+0
-0
Post new topic Reply to topic
Chapter Meeting
Personalized License Plates