Since World War I, the red poppy has been a symbol of remembrance and a way of honoring those who served and lost their lives in war. Veterans groups such as the American Legion distribute millions of red crepe paper poppies and encourage people to wear them on National Poppy Day, which is the Friday before Memorial Day each year.

But how did the red poppy become such an iconic flower?

The fierce artillery battles and trench warfare on the Western Front of WWI, in the Flanders region of Belgium, decimated the landscape. In 1915, the second year of the war, soldiers began taking note of the red flowers that sprang up in the killing fields all around them. They must have seemed like a miracle.

Common poppies, Papaver rhoeas, need light to germinate, and can lay dormant for 80 years or more until the soil is disturbed. Lime from destroyed buildings and nitrogen from bombs fertilized them, and they began to bloom in abundance.

In the spring of 1915, Lt. Col. John McCrae, a Canadian doctor serving as a medical officer for the 1st Canadian Field Artillery, sat overlooking a mass grave site. He took out pen and paper and wrote what would become one of the most enduring poems of World War I, “In Flanders Fields.”

“In Flanders fields, the poppies blow,
Between the crosses, row on row,
That mark our place; and in the sky
The larks, still bravely singing, fly
Scarce heard above the guns below …”

A YMCA war volunteer, Moina Michael, had seen the poem before. But in November of 1918, two days before the Armistice was declared, she ran across it again. It was a pivotal moment in the history of the red poppy. In her autobiography, The Miracle Flower, she described the moment as a “full spiritual experience,” in which she “vowed always to wear a red poppy … as a sign of remembrance.”

Moina Michael’s idea quickly gained support from the YMCA, the American Legion and its Auxiliary, and the Veterans Of Foreign Wars. The Legion adopted the poppy as its flower in 1920, and in 1924 created a national program to distribute red poppies annually. In 2017, Congress formally declared the Friday before Memorial Day as “National Poppy Day.”

American Legion poppies are named in honor of this century-long movement to keep alive the memories of those who made the ultimate sacrifice. 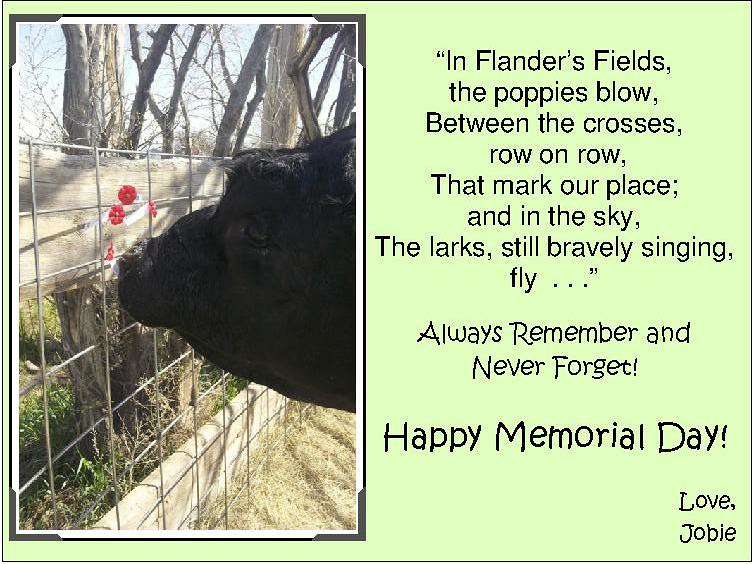 permalink   ·  vote tally
Top
+7
-0
SPONSORED
When I was a kid, they were called Buddy Poppies. Once a year, disabled members of V.F.W. (Veterans of Foreign Wars) would be selling them on every downtown street corner. My dad always wore one. He didn't serve in the military, I guess because he was thirty and had three kids when the United States entered World War II in December, 1941.

https://fliphtml5.com/lkzy/rghm/basic
permalink   ·  vote tally
Top
+1
-0
supporter
They also used to have someone stationed in the Post Office selling the Buddy Poppies (what I knew them as, also). Jobie's came from the VFW, but I had to pick them up there. Of course, we did the photo shoot a bit early because one never knew how long (or how many pictures) it would take to get what you were after.

Dad served in the Army in Berlin before the wall went up. I'm thankful I got him to write down his memories of that time. There were 6 boys in his family and, if I remember correctly, all of them served although none in actual combat.
permalink
Top
+0
-0
Post new topic Reply to topic
Book: Fanning the Embers, Range Rider Reps
Tallest structure in Montana.