Something tells me that I have missed the show. I suspect postage for the thank you will also cost more now--if the post office could manage to deliver it at all.

As I recall, we received tickets to the circus every year, although we didn't always manage to attend (reference unused ticket) since Mom didn't drive. Still, I find some reassurance about my upbringing in that we were "encouraged" to write the thank you note (which I did do even if it wasn't mailed). I do not, however, really remember Hatch Trading Center. Can anyone fill in some details for me? Thanks! 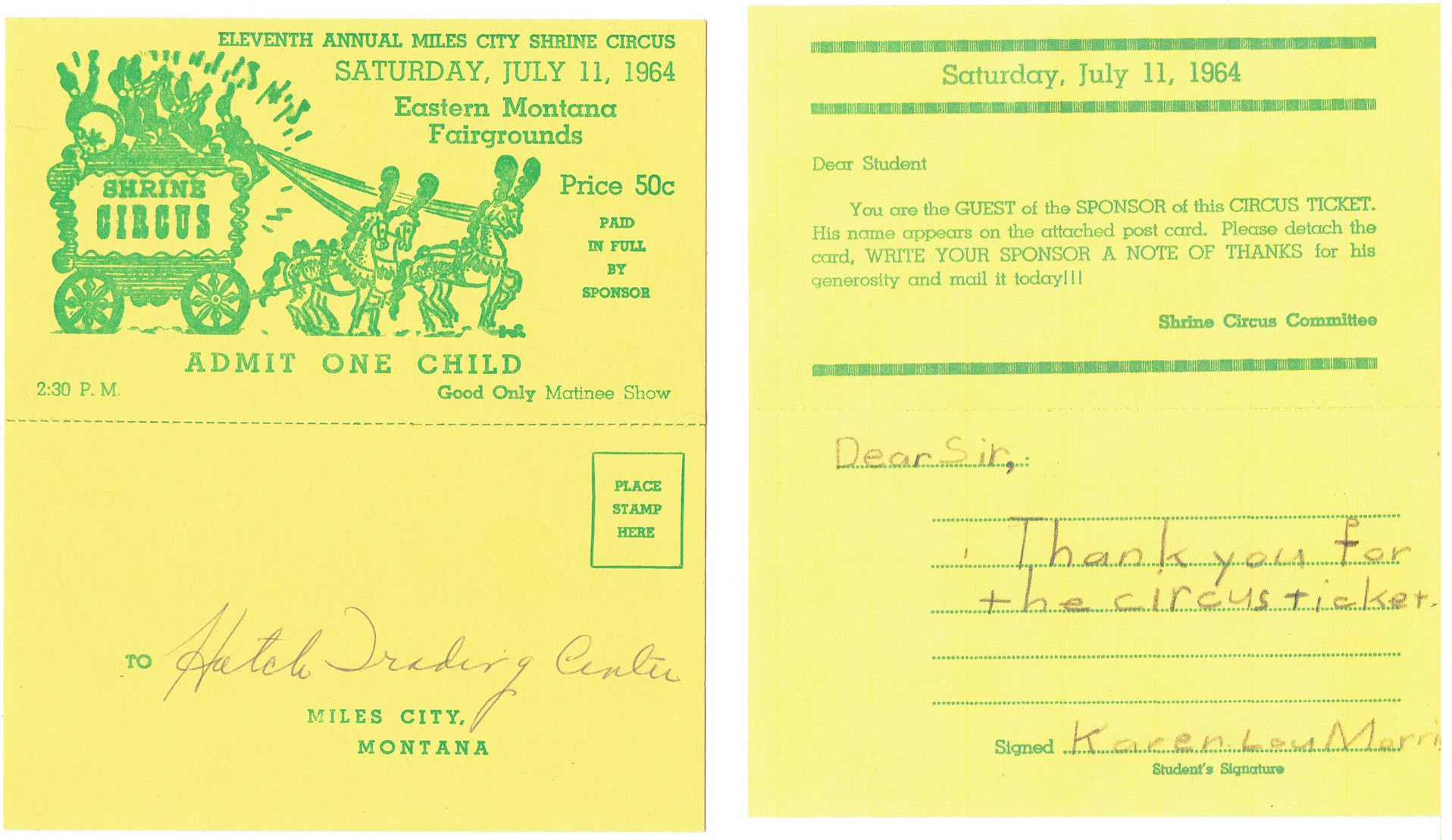 Lyda Hatch, 97, of Miles City, died Tuesday, Jan. 7, 2003, in the Holy Rosary Extended Care Facility. Mrs. Hatch was born Sep. 13, 1905, in Wapella, Saskatchewan, Canada. Her parents, Edward and Anna Moore Nugent, moved their family from Wapella to Albany, NY and later traveled by train to Montana. They settled in the Forsyth area when Mrs. Hatch was 5 years of age. She attended schools in Forsyth, graduating in 1922. Following school, she married and had two children, Wana Lorraine and Ralph Edward. Later, she met and married Charles M. Hatch (whom she so lovingly regarded as “The greatest man who ever lived”). Following their wedding on Dec. 19, 1932, in Hardin, Mrs. and Mrs. Hatch, Wana and Ralph, moved to Miles City. Mrs. Hatch worked as a bookkeeper and Mr. Hatch’s secretary during the many years they operated an auto dealership, Hatch Agency and Hatch Trading Post. Mrs. Hatch spent many hours over several years, as a volunteer at the Veterans Affairs Hospital. She was a devoted member of the Order of the Eastern Star, Rebecca Lodge, Range Rider Reps and American Legion Auxiliary. As an accomplished home cook, she acquired a huge collection of recipes and books. She gathered local fame stemming from the costume jewelry she wore. She was also a “Mud Hen,” creating many ceramic pieces, which she shared among family and friends. Her survivors include her daughter, Wana Edwards of Miles City; 10 grandchildren; 21 great-grandchildren; and 12 great-grandchildren. She was preceded in death by her husband, Charles, in 1981; her son Ralph in 1975; her daughter-in-law, Ruby Hatch in 1993; her son-in-law, Delmar Edwards in 1996, and three grandchildren. She was the last surviving of her siblings and was also preceded in death by her brothers, Roy Nugent, Louis Nugent, and Archie Nugent; and her sisters, Isabel Spannagle and Hattie Featherston.

First marriage to Harvey Benjamin Seekins at Forsyth, MT, 19 Oct 1924. He was born about 1905 in Batavia, NY, the son of William A. Seekins and Ella Purdie, according to Montana County Marriages @ familysearch.org. The marriage ended in divorce.

permalink   ·  vote tally
Top
+1
-0
I loved Charlie and Lida. When I was a kid we spent a lot of time at the second hand store and at their house. They had the best selection of used comic books. I don't know how many of you remember their big talking bird. Riley Krieger was also a real Estate agent there.
permalink   ·  vote tally
Top
+4
-0
Post new topic Reply to topic
Memorial Day 2021
Book: Fanning the Embers, Range Rider Reps