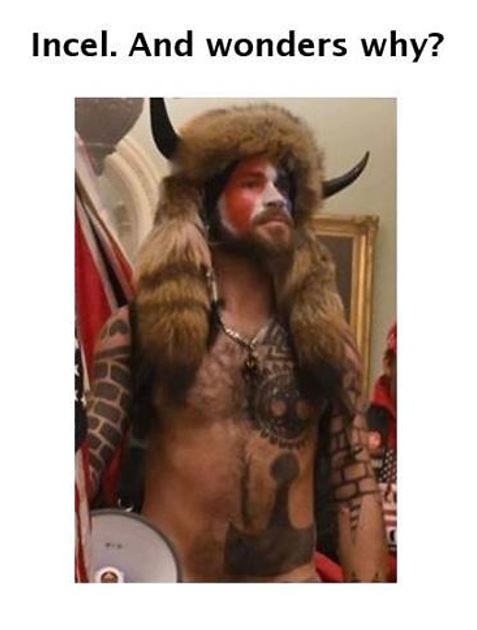 permalink   ·  vote tally
Top
+3
-0
SPONSORED
moderator
founder
Remember when the face of the Republican Party looked more like this? 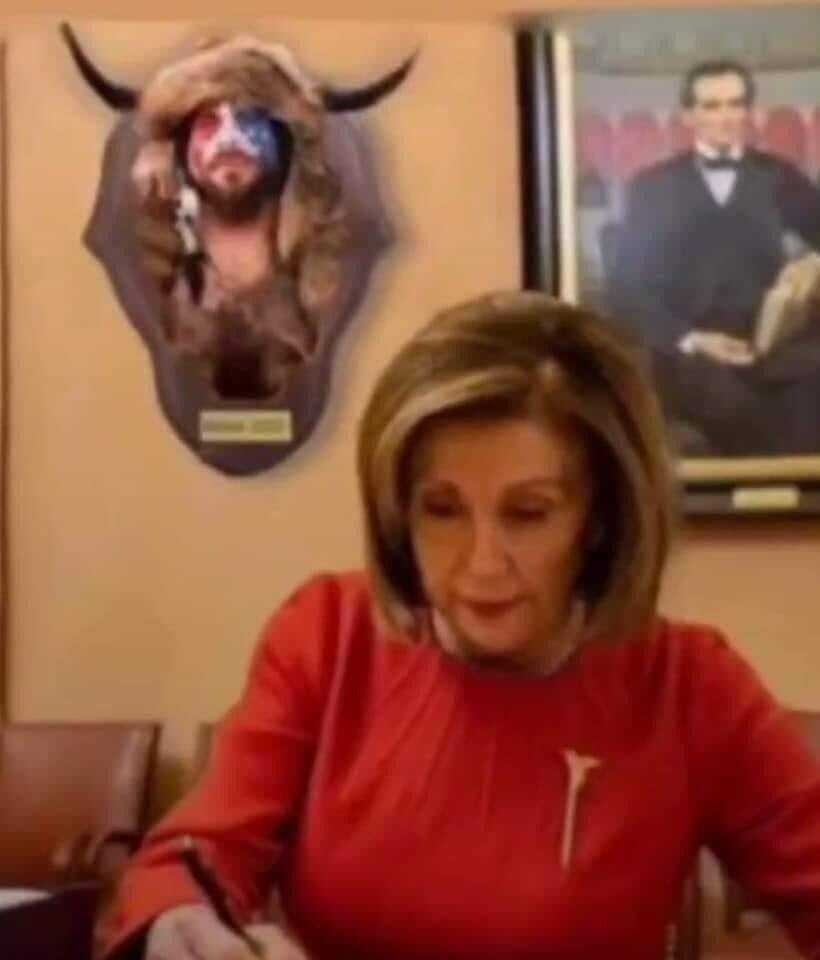 permalink   ·  vote tally
Top
+9
-0
moderator
founder
This fool seems surprised to learn he's been labeled a terrorist and put on the no-fly list. 😭

permalink   ·  vote tally
Top
+1
-0
supporter
Believe it or not, I kinda feel sorry for white-haired guy. 5 years of being an a$$kissing sycophant, only to lose it all at the end. 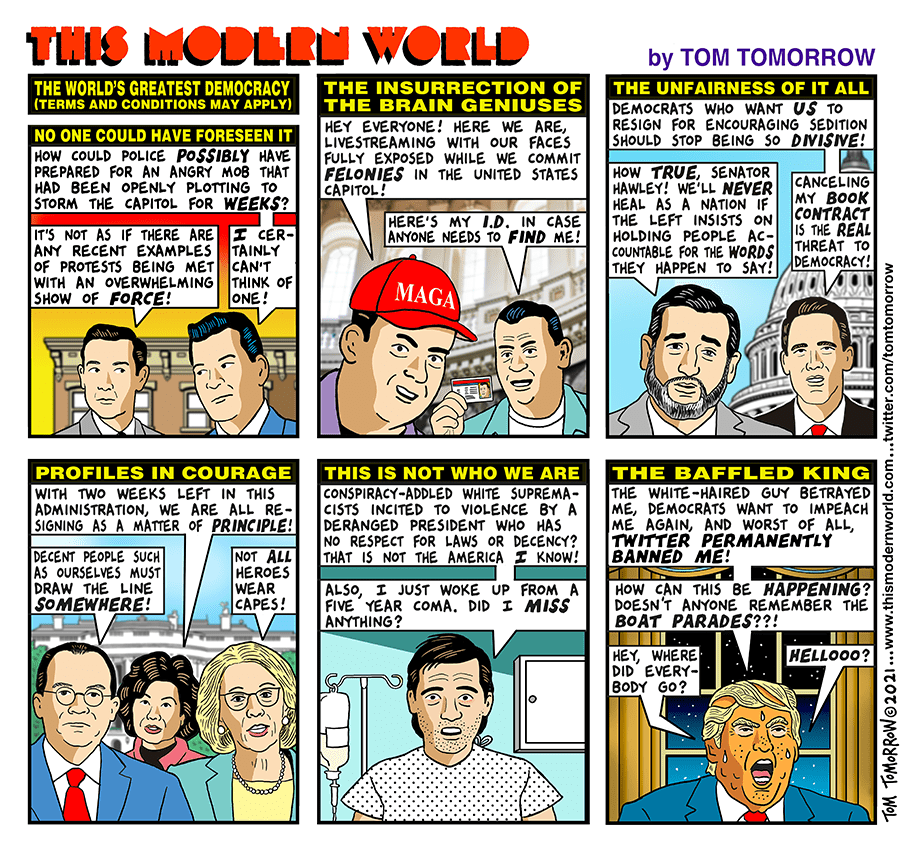 permalink   ·  vote tally
Top
+1
-0
supporter
The question I have is whether an organic diet is a right or a privilege.

Of course, I also wonder how he feels about his mother being the one to come to his dietary rescue . . .
permalink   ·  vote tally
Top
+3
-0
So I'd like all you Liberals to explain and defend your position to silence free speech- the acts of Amazon, Facebook, Twitter etc.to ban Parler and conservative speech on their platforms and block President Trump from any posts; Democrats used to rally around the right of free speech, now they seem to support it- but ask yourself this - if it was you and your beliefs being censored would you be so understanding? I have no doubt that if the shoe was on the other foot you'd be shouting down the act. It just happens to be supporting your side at the moment. Even the ACLU who generally sides with liberals is cautioning the act. So let's hear your justification...and just because you don't like Trump or his beliefs shouldn't be one of them.
permalink
Top
+0
-0
supporter
They are private companies who can do what they determine in their best interest. Again, think of social media outlets as a Christian baker and Trump as a gay wedding cake. Pretty simple.

permalink   ·  vote tally
Top
+5
-0
yes, who is not aware that they are private companies? That was not the question. Newspapers are also private companies but if they choose to only publish letters to the editor from a single perspective time after time, they are not serving the public are they? If I tell you to only answer my question though and that you aren't allowed to say anything else I'd kind of be guilty of the same thing Facebook, Twitter and Google are doing wouldn't I ...?
permalink
Top
+0
-0
I'd also add that they enjoy protections against liability that other private companies do not. If they are doing this censorship out of a declared responsibility for their published content then they should have to forfeit that protection. They want it both ways.
permalink
Top
+0
-0
supporter
Remember when all the conservatives freaked out over net neutrality? Good times. How's that free market taste now?
permalink
Top
+0
-0
supporter
They have a civic responsibility to flag lies. They repeatedly warned liars of their lying, flagging them with "read our freaking rules about lying', then at some point they punish the violators by banning them.

If the Russian and Chinese governments were endlessly lying about America on social media, would you decry their getting banned by social media?

Plenty of conservative voices are alive and well on social media. Jonah Goldberg, Ann Coulter, Bill Kristol to name a few off the top of my head. While I mostly don't agree their opinions, I at least concede that they are not liars.

To conclude, there is no concerted effort to stifle conservative free speech on Social media. There is a focused effort to stop lying and the spread of falsehoods.

Lying conservatives are free to create their own lying social media to sow their lies, as far as I know. It's still a free country.
permalink   ·  vote tally
Top
+2
-0
supporter
Twitter and other social media have RULES for users. If the user breaks the rules or bends them too far, Twitter has the right to close the user's account.
Basically, it is if you want to play in our game, play by our rules or go home.

I know the argument will now be...but, but, but....the other guys. Yes I know lots of people are bending the rules. I think this time, the rules SNAPPED.

Here is the link...I haven't figured out how to post it properly so look it up for yourself.

https://help.twitter.com/en/rules-and-policies/twitter-rules#:~:text= The Twitter Rules 1 Safety. Violence:,services in a manner intended to... More
permalink   ·  vote tally
Top
+3
-0
banned
This morning the Twitter stock markets have fallen by 10% .what does that tell you. About the time before Trump ran for office they were about to go under. Let's see if it will happen this time. No they are the true Nazi's now.
permalink
Top
+0
-0

ronaldr wrote:
but if they choose to only publish letters to the editor from a single perspective time after time, they are not serving the public are they?

Correct. However, the Fairness Doctrine, introduced in 1949, was a policy that required the holders of broadcast licenses to both present controversial issues of public importance and to do so in a manner that was honest, equitable, and balanced, was repealed in 1987.

And what we have now are largely propaganda outlets that are very one sided. None of the top televised are more so than Fox which offers unfair interpretations of news. This can be seen in this chart.

[Edited by Steve Sullivan (1/11/2021 9:56:10 PM)]
permalink   ·  vote tally
Top
+6
-0
Bridgier and Gunnar, The free market would taste fine - if it was a free market, when public or private entities start deciding who can have a voice and who can't it is no longer free is it? People should be able to decide for themselves what they believe and what they don't without the overmasters preordaining the material for them, or do you feel that you need someone to decide that for you? Somehow I think what you believe wasn't decided for you by someone else was it? You have a mind and can decide for yourself can't you?
permalink
Top
+0
-0
Steve Sullivan,

Perhaps you haven't seen the Senate Intelligence Committee's report on Russian interference in the 2016 U.S. election:

Your statement is a biased opinion. It is not supported by the facts and studies that refute your claim.

For instance if I say: I have watched TBN and it is the best science channel I have ever seen. That is not true due to facts that easily refute it, AND it is only my opinion.

Sorry dude, but facts win.
permalink   ·  vote tally
Top
+4
-0
supporter
You can believe anything you want to, but it boils down to this:

There is the truth, and there are facts. There is no such thing as "alternative facts", despite Kellyanne Conway's claim otherwise.

When lies are used to incite riots and lead to a coup attempt, companies have every right to ban the lying liars who are responsible for the lies. Its high time to take our democracy back.
permalink   ·  vote tally
Top
+5
-0
supporter
Private companies have terms of service. Parler was warned before they were booted

Also Trump and the Republicans want to repeal Section 230 of the Communication Decency Act which shields social media companies from being sued about content that users posted.

If that happens, a lot of accounts would be terminated.
permalink   ·  vote tally
Top
+3
-0
Steve- your "facts" are based on the info you choose to believe apparently....and if private companies can ban whomever they choose then why can't the Bakery shop refuse cakes to same-sex marriages? You guys are full of double standards....check those "facts" why don't you?
permalink
Top
+0
-0
SPONSORED
moderator
founder
USA Today: Supreme Court rules on narrow grounds for baker who refused to create same-sex couple's wedding cake
permalink
Top
+0
-0
Post new topic Reply to topic
A modern day parable
Steve Daines donates testicles to Trump