I know it was the Texas Club then Kelly's Gas Lite/Disco Lounge, then The Drake Lounge, and then it was once again called the Texas Club before permanently closing.

Sad to see it demolished. I had a lot of fun there in the 1980s when it was The Drake Lounge. 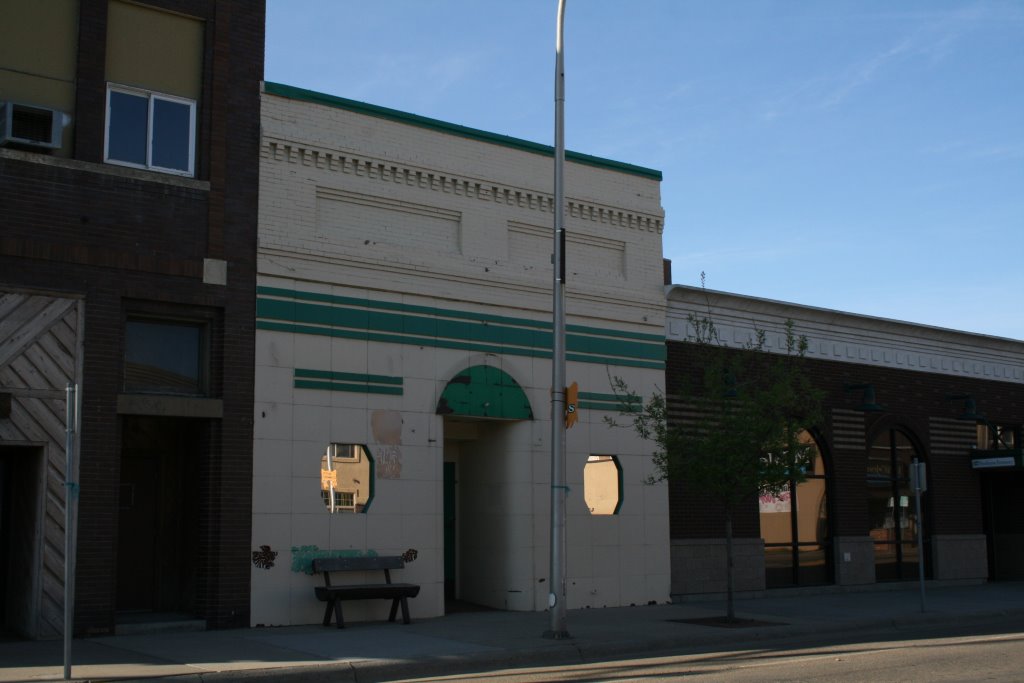 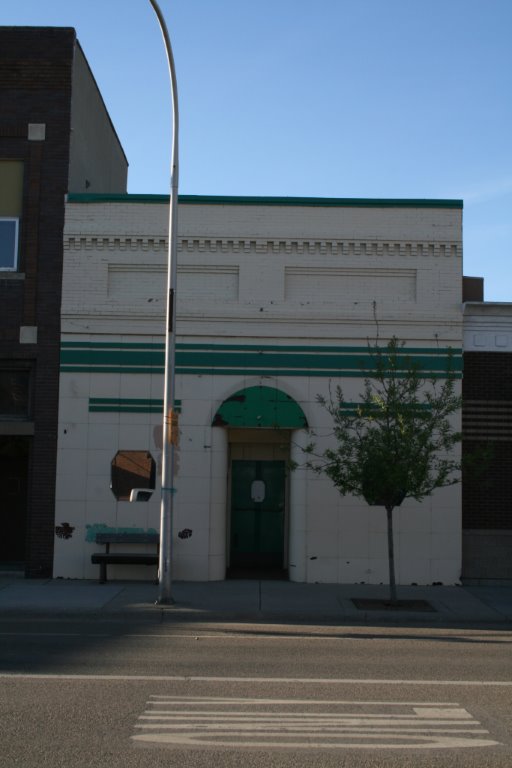 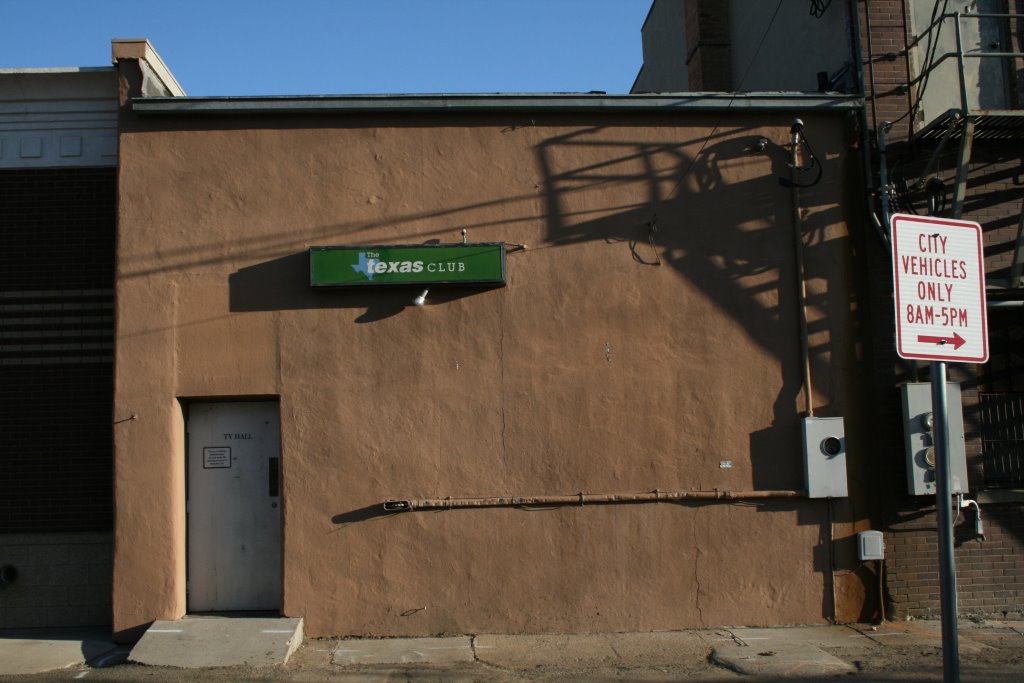 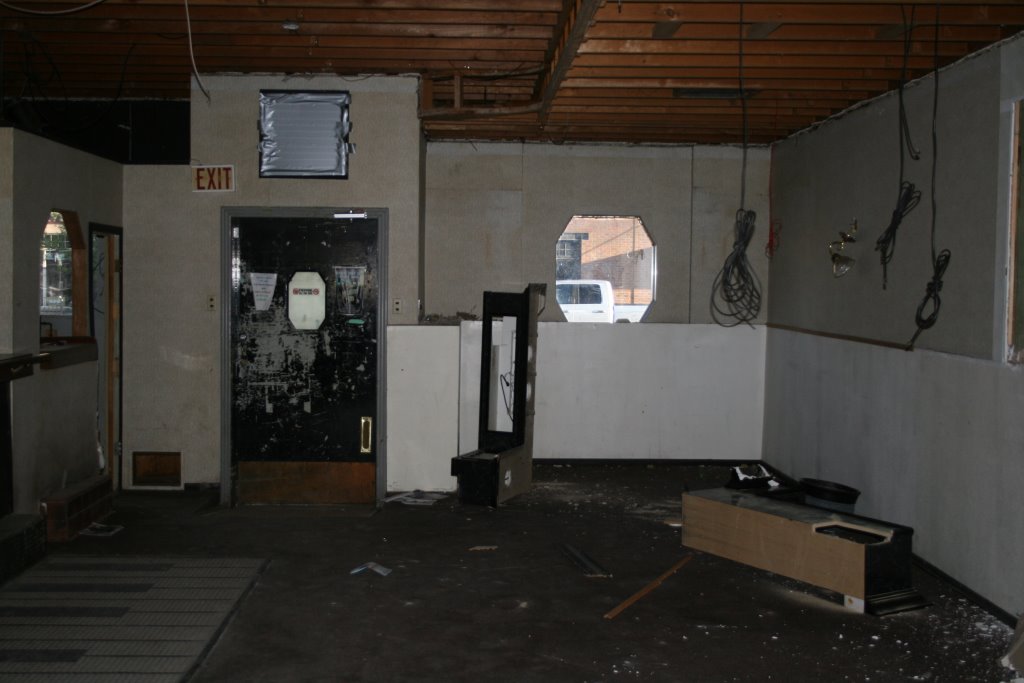 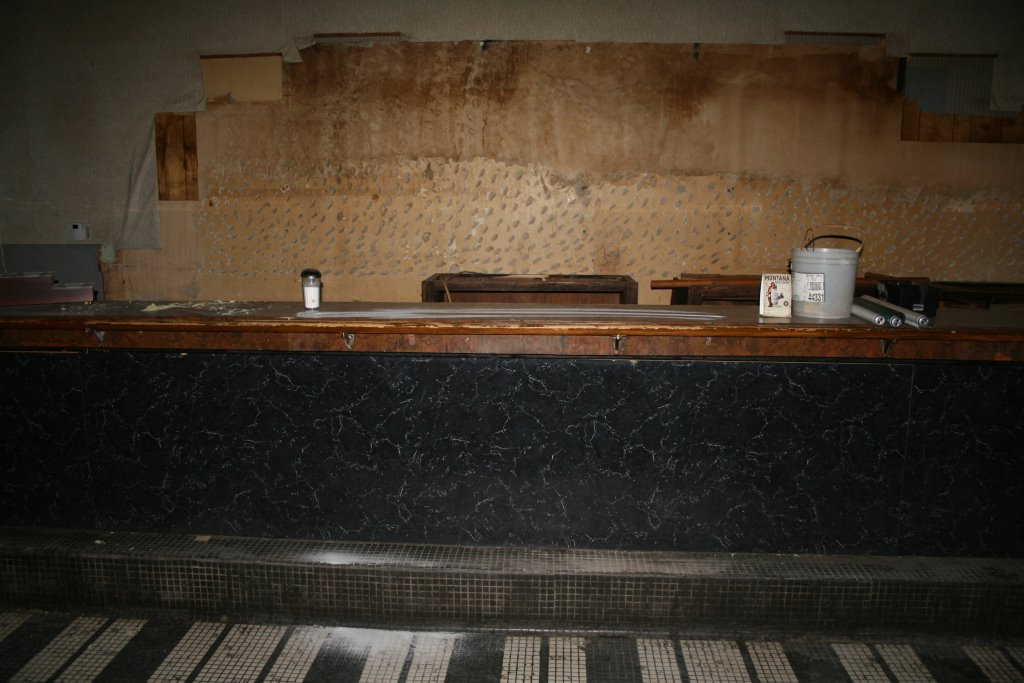 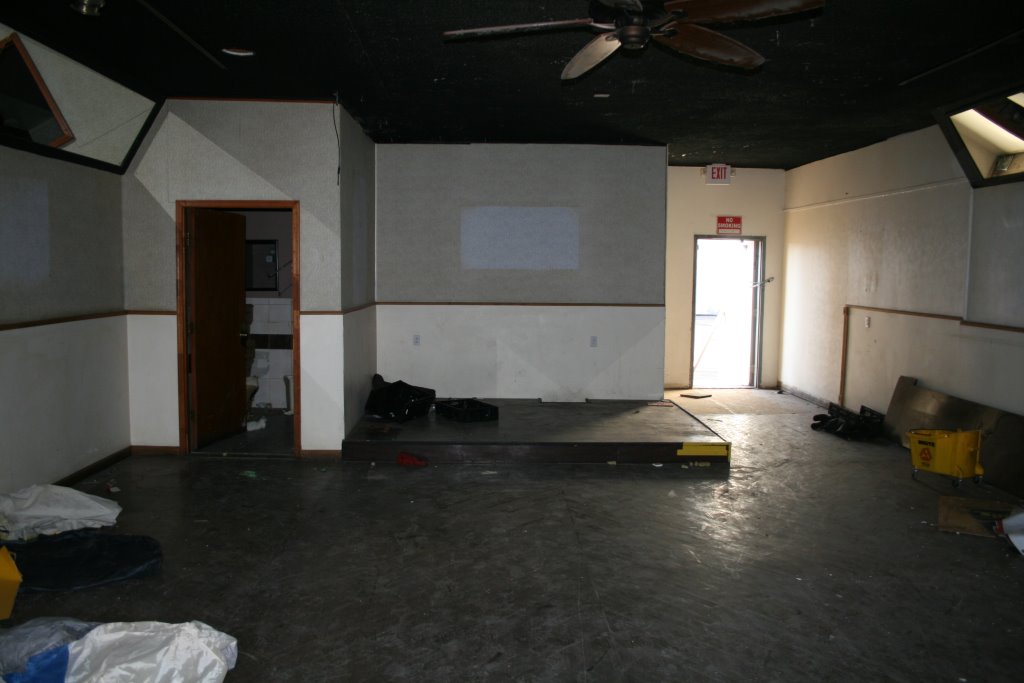 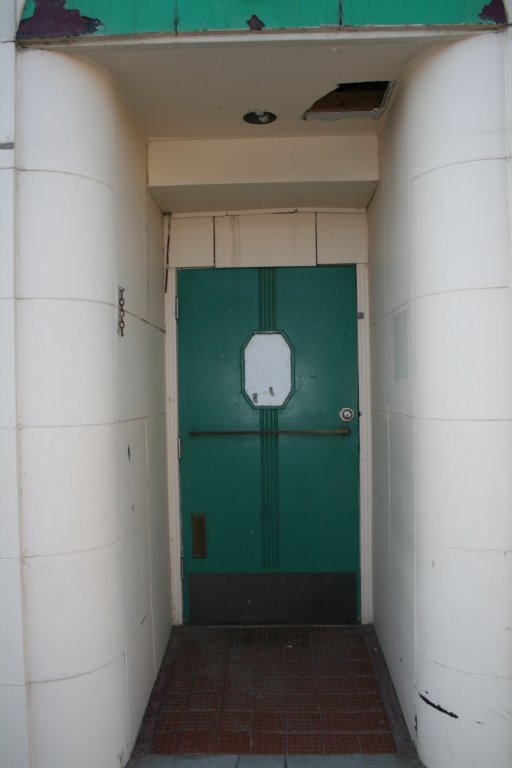 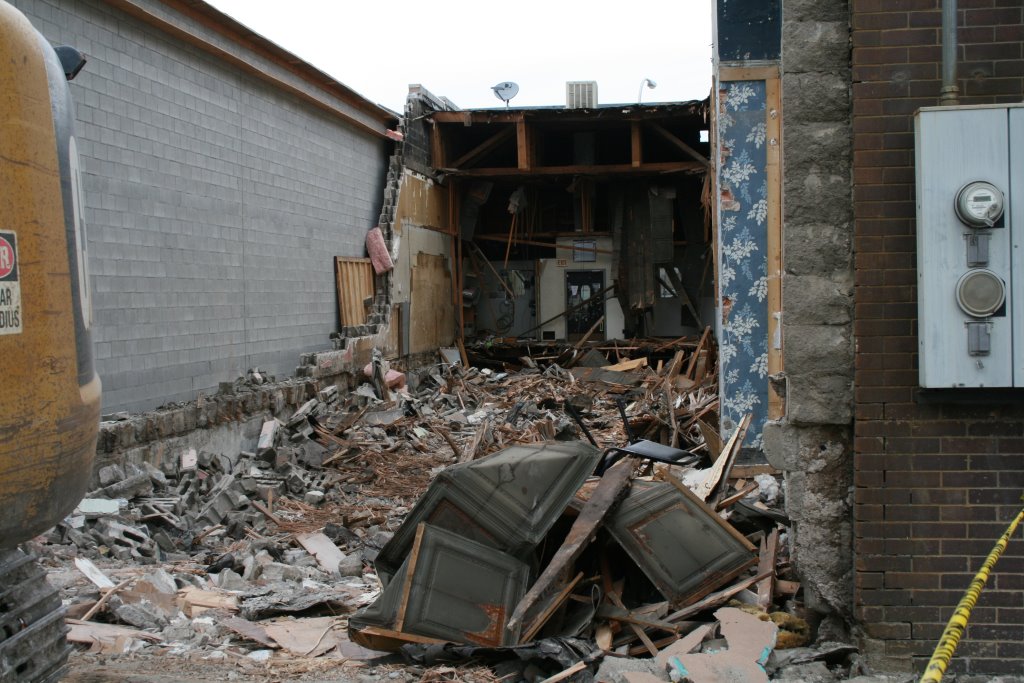 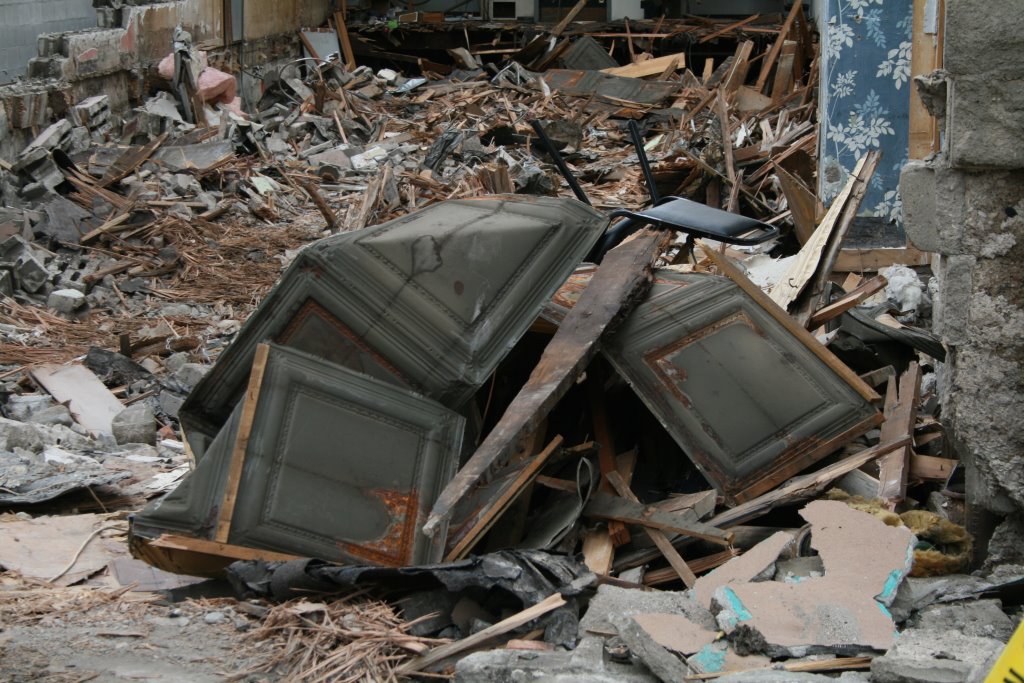 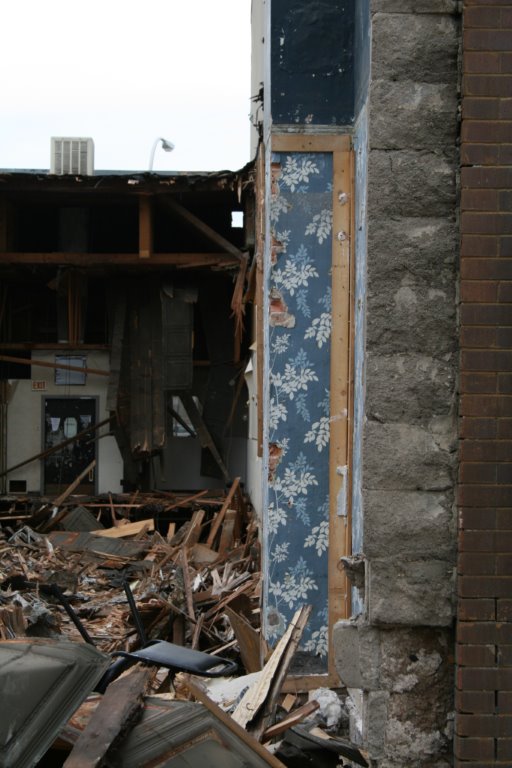 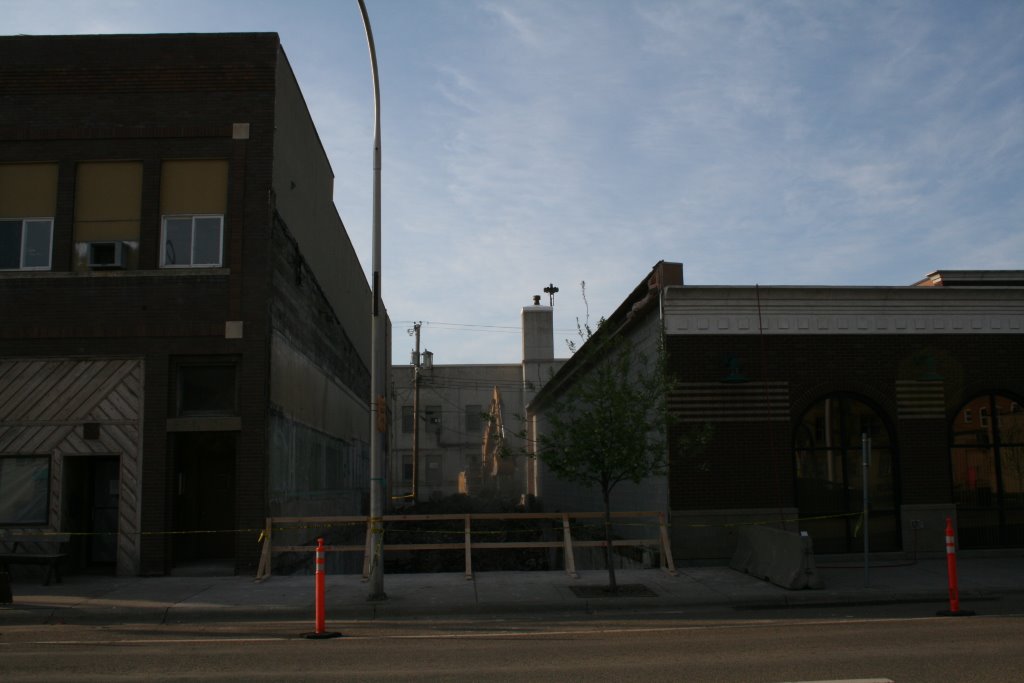 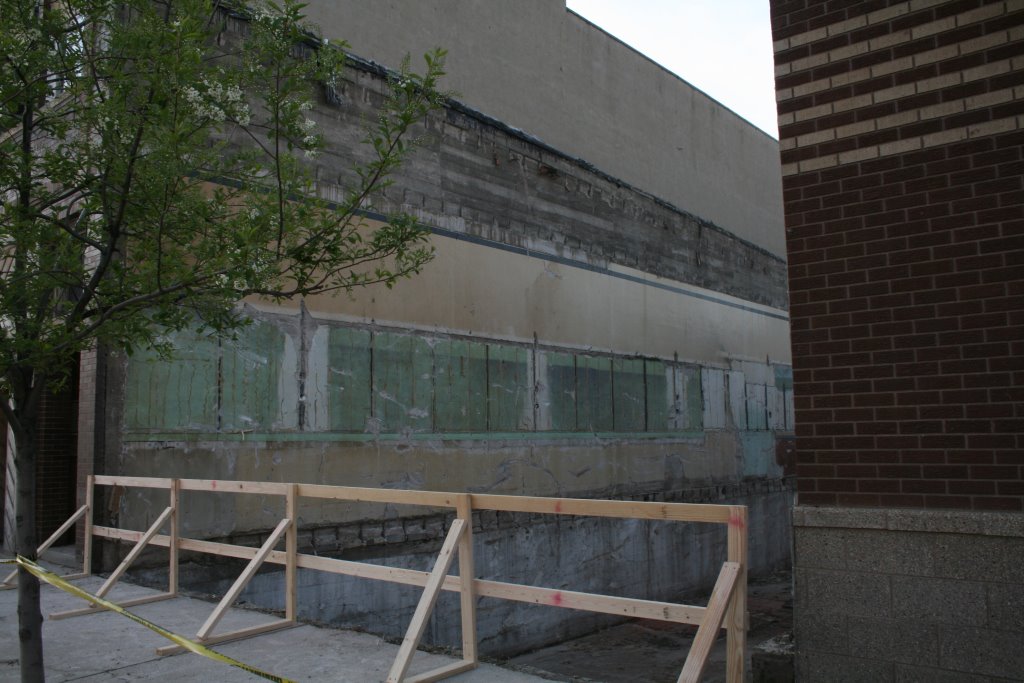 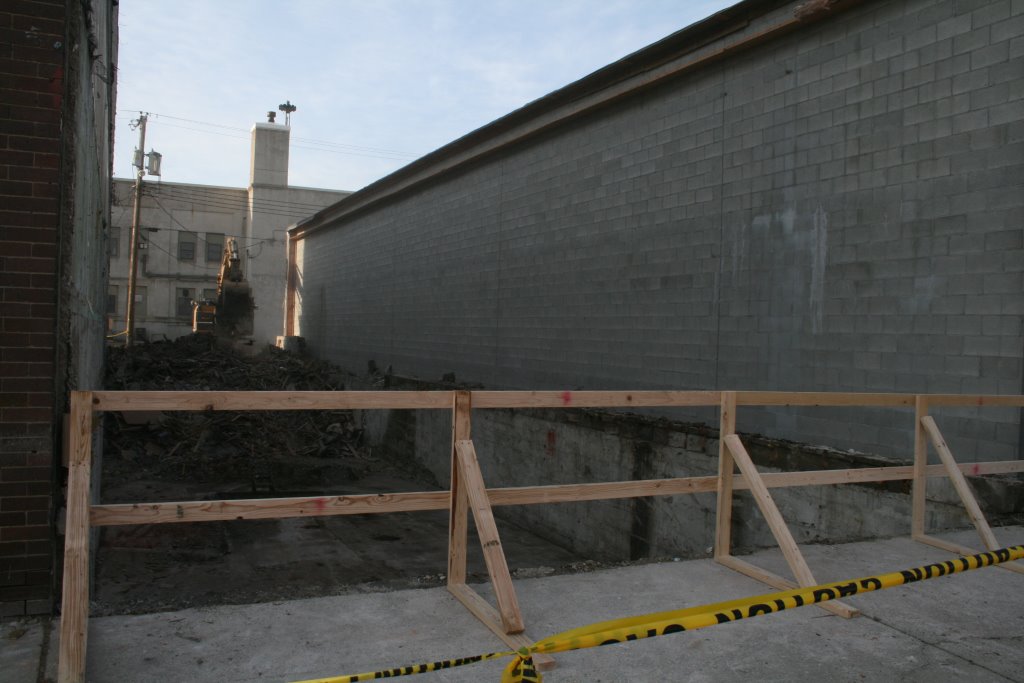 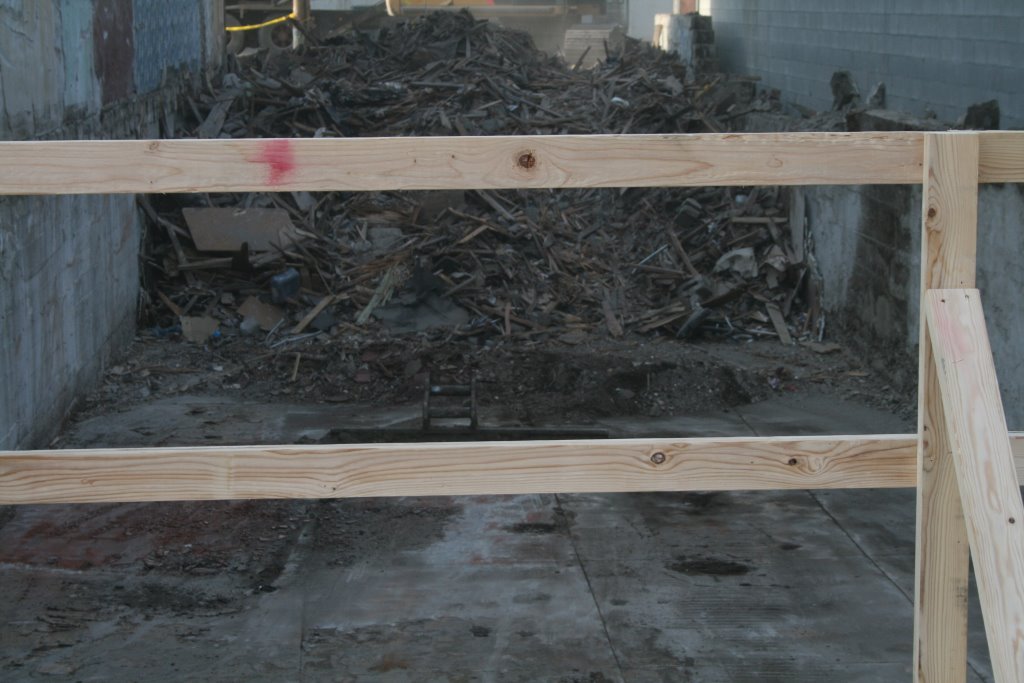 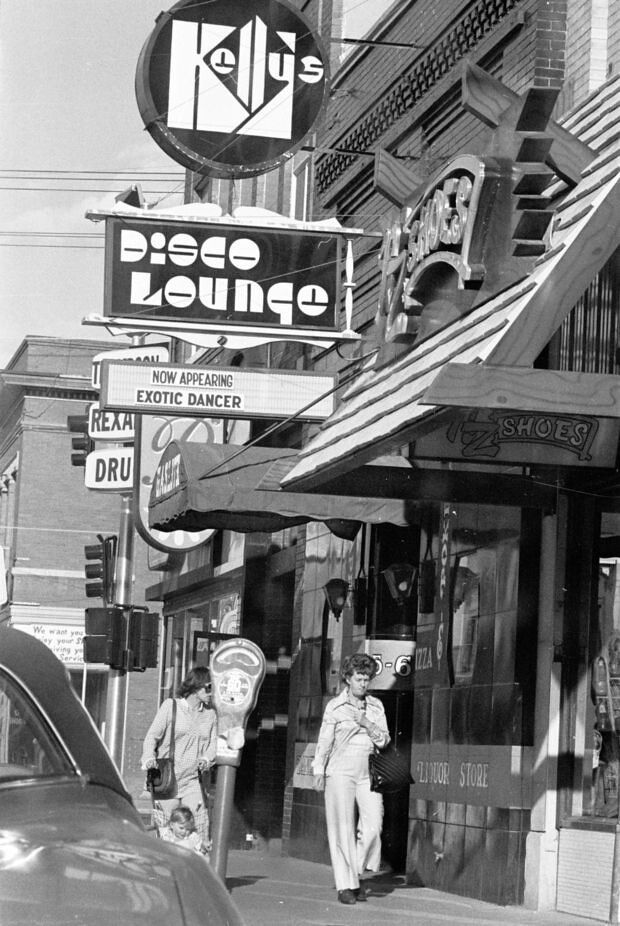 permalink   ·  vote tally
Top
+6
-0
moderator
founder
I don't recall the piano key tile floor that was in front of the bar. Does anyone have insight on that?
permalink
Top
+0
-0
founder
supporter
sponsor
If I remember right (and that’s shaky at best), the black tiles were there the entire time that Kelley owned the place - from the late 60s though the 70s.
permalink
Top
+0
-0
supporter
The only thing that surprises me somewhat is that a fire was not the culprit. My memory has it that buildings like El Robo, McDonalds clothing, and more recently the Jewelry store and the Cellar (which was re-built) went up in smoke and flame. I'm not sure when was the last time a building was simply demolished like this as opposed to burned.

Anyway, always a bit sad when a building I remember from "back in the day" goes.

So, what next? Is Stockman Bank going to expand into that space or will it just be an empty space??? The McDonald's store was made into a Veterans Memorial/park, El Robo became a parking lot. Maybe something like that? Any word?
permalink
Top
+0
-0
banned
Sad to lose old structures like that a lot of history gone .do remember what it was the gas light. Thank you for posting pictures
permalink   ·  vote tally
Top
+4
-0
banned
Yes it was called Kelly's gas lite but we always called the gas lite
permalink   ·  vote tally
Top
+1
-0
moderator
founder
Thanks, Hal. I suppose that piano key floor was there in the days of The Drake and I just don't remember it. It's been a few years.

Shu, Stockman Bank owns this property and according to an article in the Miles City Star they also own the former Thompson Rexall Drugs building on the corner. "We are planning to build a new unit where the Texas Club was and then expanding to add additional office space," is a quote from Stockman Bank's Stan Markuson taken from the article.

The jewelry store (formerly John Stockhill Jewelers, now MC Jewelry) survived the fire that took out much of the north side of the 700 block of Main St.

A new dental clinic building (McFarland Family Dentistry) was erected on a portion of the space formerly occupied by the ElRobo Building.

Oh, and the Bean Bag grocery store was razed (not destroyed by fire) to make way for an expansion to the M&H parking lot.
permalink   ·  vote tally
Top
+5
-0
supporter

David Schott wrote:
Shu, Stockman Bank owns this property and according to an article in the Miles City Star they also own the former Thompson Rexall Drugs building on the corner. "We are planning to build a new unit where the Texas Club was and then expanding to add additional office space," is a quote from Stockman Bank's Stan Markuson taken from the article.

Thanks, I had forgotten about Log Cabin and NZ Shoes, though it's true that fire has taken a few businesses on Main and also on Valley Drive East over the years.

Are you sure Stockman owns the former Rexall Drug store though? I thought Miles Milligan owns that property. In fact, he and his wife lived in the apartments above that a few years ago...then again, as he's gotten older he may have decided to sell it to the bank?
permalink
Top
+0
-0
moderator
founder

Shu Pius wrote:
Are you sure Stockman owns the former Rexall Drug store though?

I got my information from the Miles City Star:

Flotkoetter purchased the building in 1999.

The Texas Club closed down nearly four-years ago.

According to Stan Markuson, Miles City Market President at Stockman Bank, they also own the corner unit that was formerly the Rexall Drug building.

“We are planning on building a new unit where the Texas Club was and then expanding to add additional office space,” Markuson said.

Earl Bennett wrote:
per Montana Cadestral Rick is still listed as property owner of Texas Club site, Thompson's was modified in Aug 2016 as being owned by Stockmans.

The sale of the Texas Club building was just finalized in the weeks before the demolition so I'm sure the Cadastral hasn't been updated.
permalink   ·  vote tally
Top
+1
-0
moderator
founder
Here's another exterior shot of Kelly's Gaslite. This was sent to me by Gary Coffrin. Gary couldn't remember the original source of this photo. He estimated it was taken in around 1975. In 1977 the facade was updated to say Kelly's Disco Lounge so this was pre-1977.

Gary thought that a Miles City guy by the name of Joe Berg did the hand-painted lettering on the facade. 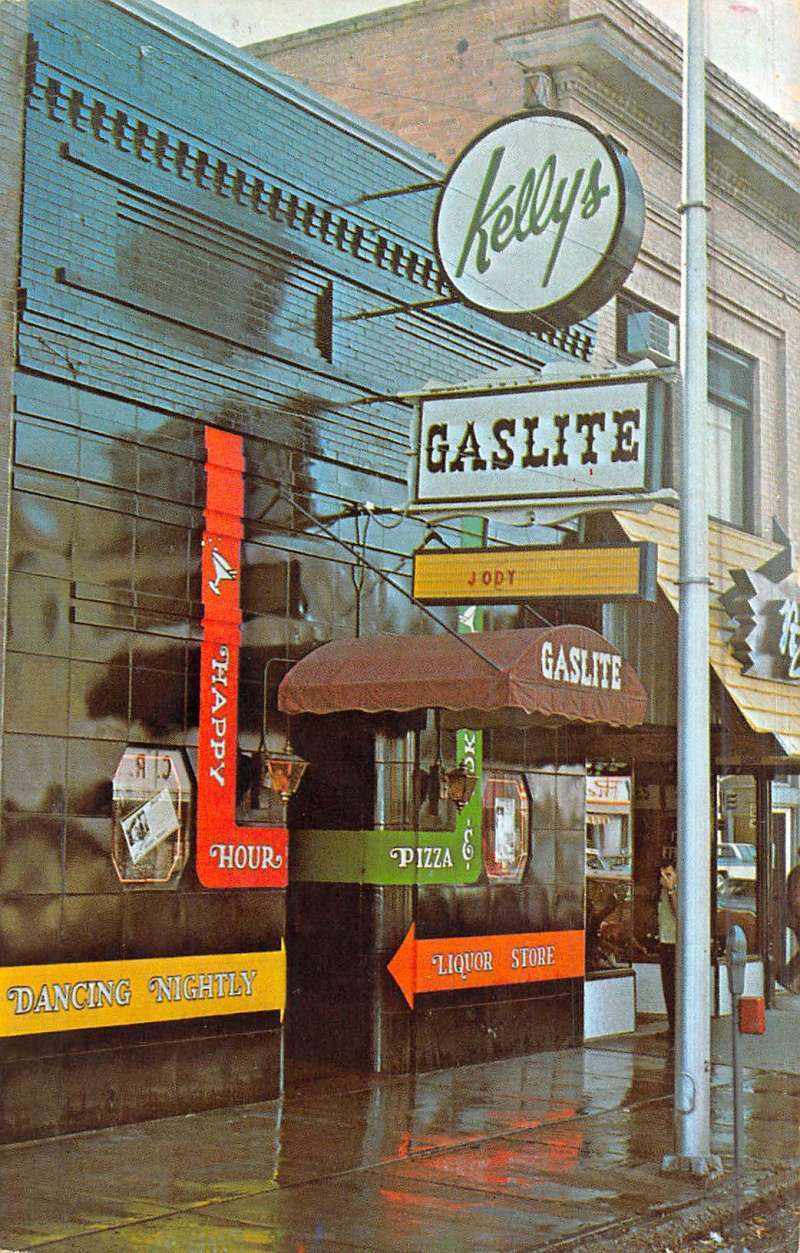 [Click the photo to open the IMGUR site, then click the photo on IMGUR for a larger view.]
permalink   ·  vote tally
Top
+2
-0
moderator
founder
Not sure if the tile on the facade of Kelly's was "Vitrolite" or not but here is an interesting story about Vitrolite:

The Oklahoman: Glassed from the past: Two keep craft of Vitrolite installation alive
permalink
Top
+0
-0
founder
supporter
Yup. It was Vitrolite. There are still a few tiles around the pillar at Big Sky Pharmacy and smaller black and green ones in the Montana Theatre lobby.
permalink   ·  vote tally
Top
+3
-0
moderator
founder
The space left by the demolition of the Texas Club building has been filled in with an expansion of the Stockman Bank. The Thompson Rexall Drug building on the corner (720 Main St) is also undergoing remodeling by Stockman Bank. 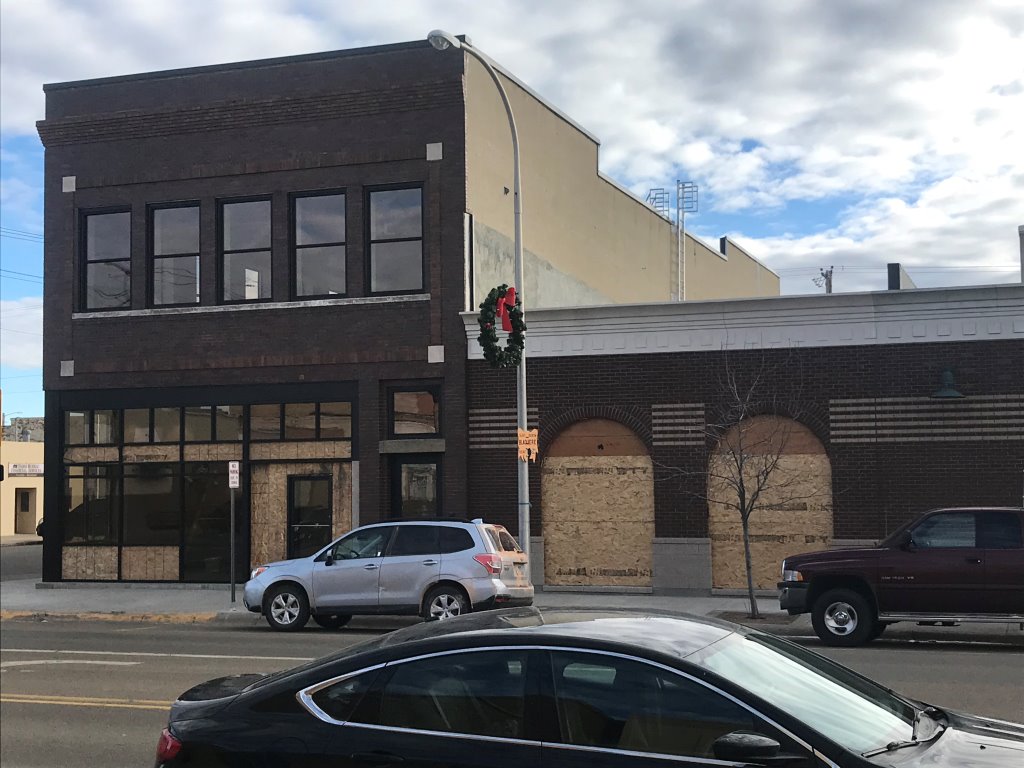 Here is an interior shot of the former Thompson Rexall Drug building. 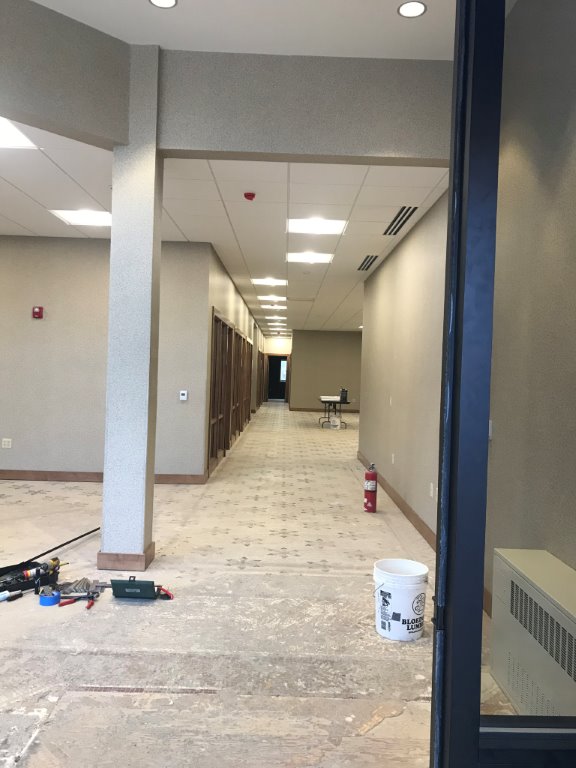 I really like how they have restored the windows in the Rexall Drug building. 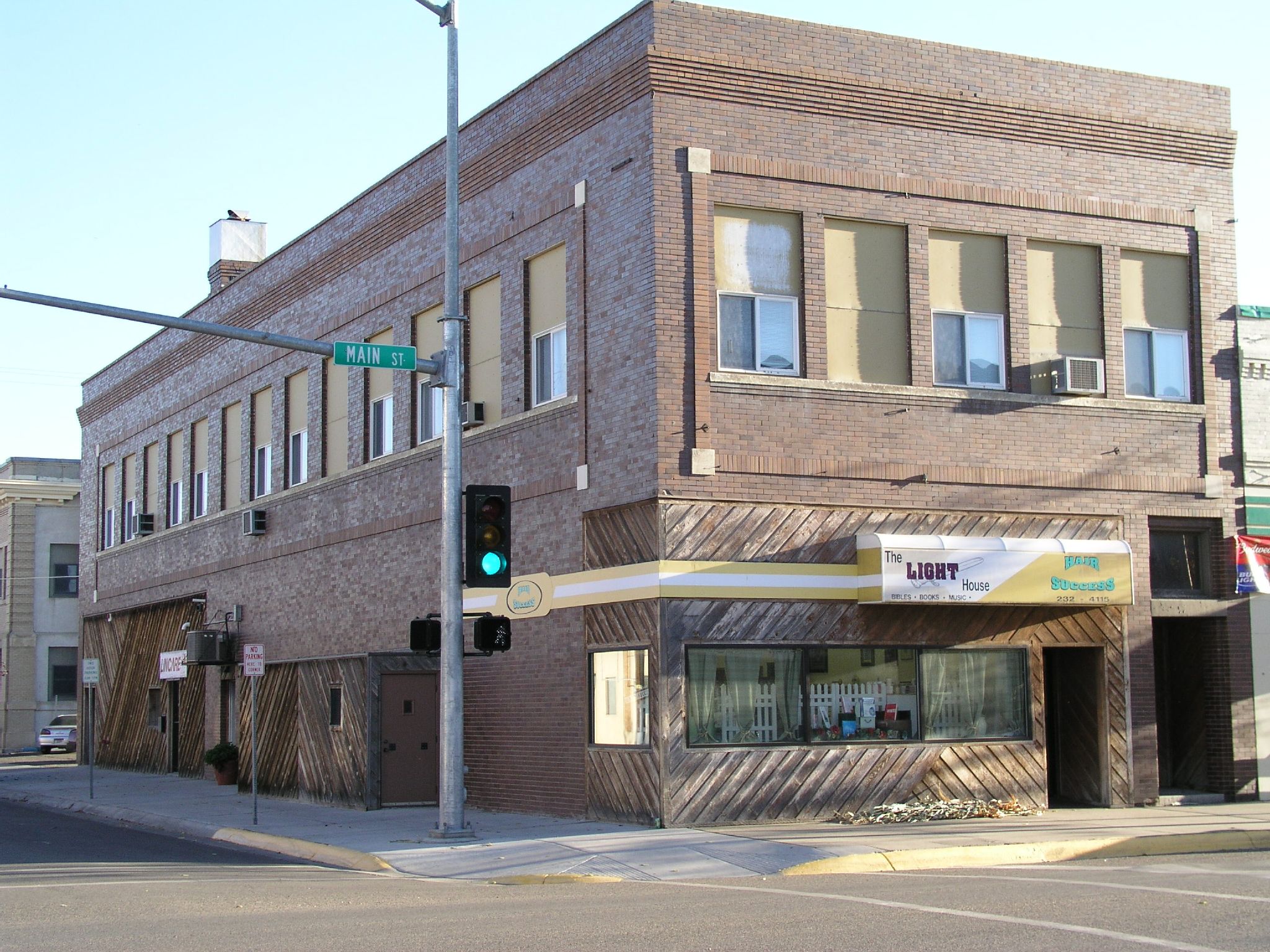 Southwest Corner, 8th & Main, Miles City by David Schott, on Flickr
permalink   ·  vote tally
Top
+1
-0
supporter
I remember The Texas Club, In the late 40s and 50s. It was owned and run by Herman Venable. After he sold it to Earl Kelly, Kelly reamed it kelly’s Gaslight and brought in the exotic dancers. I don’t know who else recalls when it was burglarized in the 60s. I won’t name the culprits, but one of them had a relationship with a female cocktail waitress who blew the whistle on the operation. So on the appointed night, Kelly left his beautiful antique safe unlocked. Not to be deterred the culprits never tried the handle and peeled the safe (beat the hell out of it with chisels and hammers) anyway.

When Kelly sold the club it was renamed The Drake and finally in recent years, leading to its becoming part of the Stockman Bank, it was returned to its original name, The Texas Club.
permalink   ·  vote tally
Top
+1
-0
supporter
Mmmm........female cocktail waitress in the 1960s. I picture blue eye shadow the color of pool cues.

Nice reminisce.
permalink
Top
+0
-0
supporter
Hmm, I'd love to hear the conversation between my grandfather, Bill Nefsy, and CM Coffee on the changes in the drugstore. I guarantee the first liar wouldn't stand a chance.

permalink
Top
+0
-0
SPONSORED
supporter
They probably weren't having coffee and discussing world events in the drugstore but were directly below in The Custer Club, owned and run by Billy Grogan. Grogan sold the club and moved to Billings where he had the Crystal Lounge across the street from the Northern Hotel.
permalink
Top
+0
-0
Post new topic Reply to topic
Sic Semper tyrannis
Ken Ziebarth