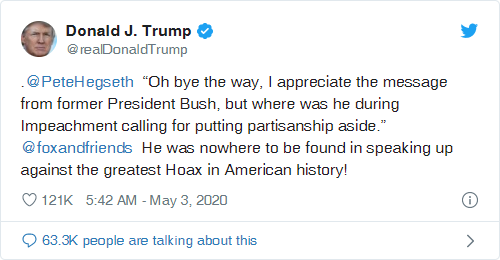 The former president shared a three-minute video on Twitter Saturday urging Americans to overcome partisanship after outlining the importance of the "spirit of service and sacrifice" and "empathy and simple kindness" in the face of outbreaks by leaders, healthcare workers, and other Americans.

Bush also pointed to the September 11, 2001, terrorist attacks as an example that the US has withstood "times of testing before."

Near the end of the video, Bush asks Americans to "let us remember how small our differences are in the face of this shared threat."

"We are not partisan combatants," Bush says. "We are human beings, equally vulnerable and equally wonderful in the sight of God. We rise or fall together, and we are determined to rise."

As of Sunday morning, the video had racked up at least 4.5 million views. Less than 24 hours after it had been tweeted, it also received a tweeted jab from Trump.

"He was nowhere to be found in speaking up against the greatest Hoax in American history!" Trump added.

The 43rd president did not publicly comment on the two approved articles of impeachment the House passed against Trump in December 2019, but other members of the family have criticized Trump, including former first lady Barbara Bush who said in 2018 that she didn't consider herself a Republican anymore because of Trump's rise to prominence.