Main Street Fire - Wibaux Building - 1964
Karen L. Morris
Earl Bennett
Karen L. Morris
Amorette Allison
Karen L. Morris
David Schott
David Schott
Karen L. Morris
Karen L. Morris
Gunnar Emilsson
Karen L. Morris
Post new topic Reply to topic
supporter
It seems that much of Main Street has been lost to fires over the years. The one I probably remember best is 2009--in part due to being older and part due to going past as I went to feed Jobie. In going through the "archaeological finds" (my parent's belongings), I found that they had saved the Miles City Star from June 9, 1964 which detailed the Wibaux Building fire. I don't really remember the fire. I do remember Della's Dress Shop and thought it was interesting that the clothing was transported across the street to Shore's. In some ways, not unlike the 2009 fire when inventory was moved across the street to secure it. It seems to me that Miles City has pretty much always been a place that people helped out when you needed it.

I also found the paper interesting because the typeset has changed over the years. The old ads were great, too. Special thanks to the Miles City Star for saying it was OK to post this as long as they got credit (which they deserve). I thought it was too good not to share. 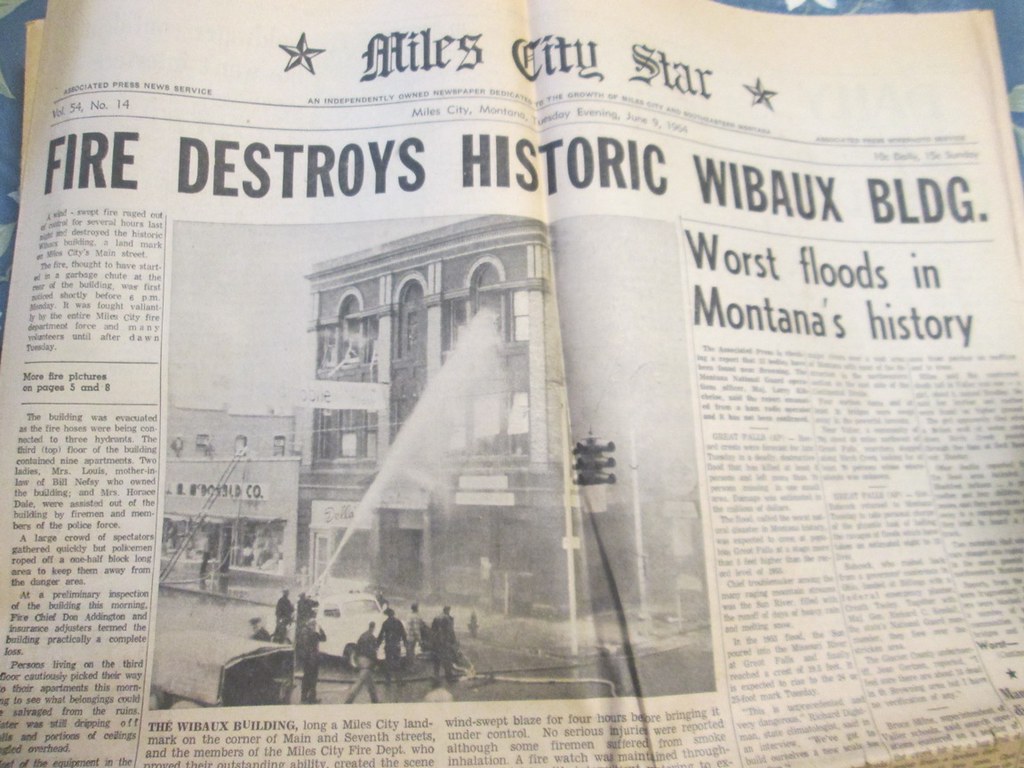 On 2nd look I guess it could be where the US bank is, and that is the Milligan in the background instead of Fosters Drug. Was it the Arnold Building on 8th and main that burned down to make the Cellar?

[Edited by Earl Bennett (2/27/2020 11:05:22 AM)]
permalink   ·  vote tally
Top
+1
-0
supporter
I believe Main and 7th is correct. The full article talks about Bill Nefsy owning the building and that there had been plans for demolition the following March to make way for construction of the new Miles City Bank building. I believe Miles City Bank was the predecessor of Stockman Bank.
permalink
Top
+0
-0
founder
supporter
It's where Stockman Bank is now.
permalink   ·  vote tally
Top
+2
-0
supporter
The Star's coverage was pretty phenomenal. There are two full pages of photos taken by George Larson. It was also amazing to read about all the volunteers that pitched in and the businesses that did so, as well. Makes you proud to be a part of Miles City.

Don't you just love superlative weather events? They're always "the worst in history". My sister-in-law visited me two different times here in Redmond during the 1990s when the local news was declaring us to be having "the storm of the century". I was beginning to think she was bad luck.
permalink   ·  vote tally
Top
+1
-0
supporter
You're correct. Bill Nefsy owned the building and it was scheduled for demolition the following March. At that time, it was still Miles City Bank. The name changed to First Security Bank & Trust in 1965. In 1997, the name was changed to Stockman Bank.

Interesting to note that one of the women (called "ladies" in the article)that lived in the apartments upstairs was Mrs. Lewis, the mother-in-law of Bill Nefsy. Both women were evacuated safely (Mrs. Horace Dale was the other one).
permalink   ·  vote tally
Top
+1
-0
supporter
The floods sounded pretty bad from the article. There was loss of life and damage in the millions of dollars (which was a lot then). The crest at "populous Great Falls" was anticipated to be more than 5 feet higher than the record level of 1953.
permalink   ·  vote tally
Top
+2
-0
supporter
The flood of 1964 was indeed pretty bad. But flooding in Montana is localized, due to the size of the state. The 1964 flood was probably the worst that Great Falls had ever seen. For Missoula, it was the flood of 1908.