permalink   ·  vote tally
Top
+1
-0
SPONSORED
founder
supporter
The problem is, tRump is completely and utterly corrupt but his supporters are too embarrassed to admit they were duped by Russian propaganda into voting for a vile, incompetent, lying, racist, ignorant traitor that they will support tRump to the bitter end. Which may mean the end of this country.
permalink   ·  vote tally
Top
+5
-0
supporter
I agree, I am left speechless by anyone who would say that the choice is between Trump and Socialism. I couldn't think of how to engage someone possessing such an intellect. If such a viewpoint represents a significant portion of the electorate I fear there is no way to start the conversation.

permalink   ·  vote tally
Top
+3
-0
I think too many are not considering the longer term consequences regardless of their position. If the Senate impeaches Trump and he is removed from office then Pence becomes president and I have already heard at least one Dem. indicate that Pence need to be impeached! Pence may have an even better chance of besting any democrat that runs against him.

What goes around comes around. Clinton problems with impeachment were IMHO nothing more than the Repubs. getting even for everything the Dems. did to them over the years when they were in power. Of course others may differ. One should note that after Clinton's impeachment trial the special prosecutor law was not renewed by both the Dems and Repubs and for good reason.

So if this impeachment goes forward then payback is assured and then what. It would be best if the Dems run an acceptable candidate as opposed to last time.
permalink
Top
+0
-0
supporter
Trump is going to be impeached by the House, but no way will he be removed from office by the Senate. There are not 20 Republican senators who have the cojones to vote for removal.

It is pretty clear that Trump is guilty of violating our Constitution on two counts.

1. Conspiring with a foreign government to influence our elections.

It is amazing to watch Trump spit on our Constitution, using phrases such as "perfect call" and "phony emoluments clause."
permalink   ·  vote tally
Top
+5
-0
moderator
founder
All the more reason why it's important for the Democratic Party to offer a candidate that appeals to a broad set of voters.
permalink   ·  vote tally
Top
+2
-0
Why all the fuss? 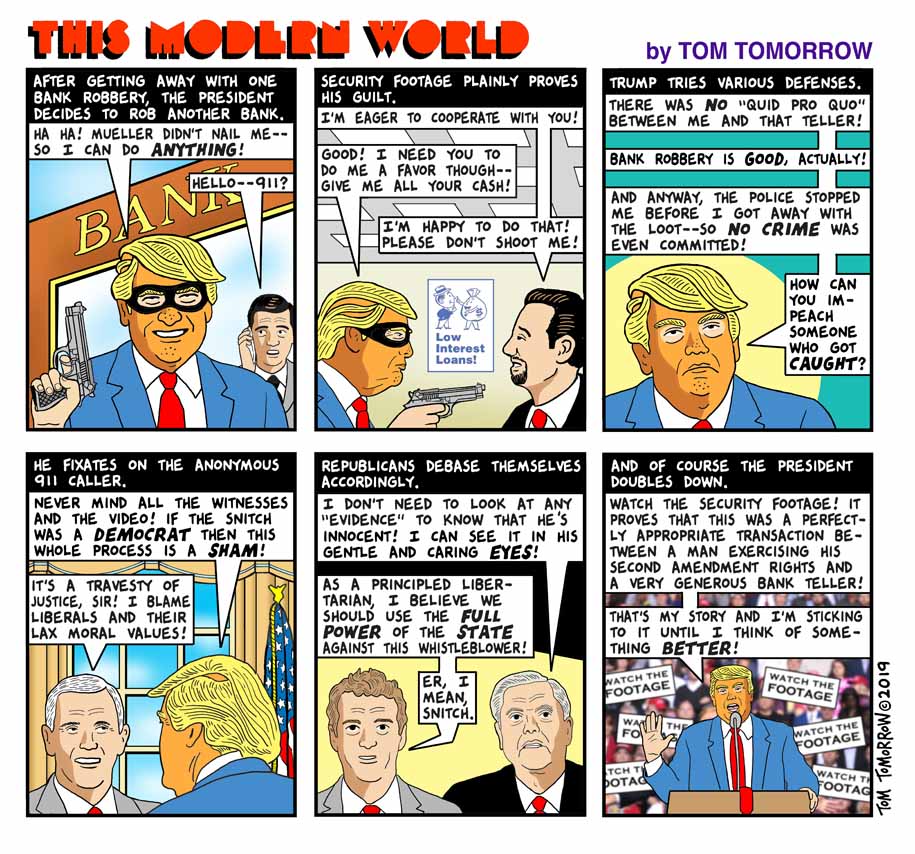 Boys and girls, let this be a lesson for you: violating the Constitution of the United States of America does not pay.
permalink   ·  vote tally
Top
+5
-0
founder
supporter
sponsor 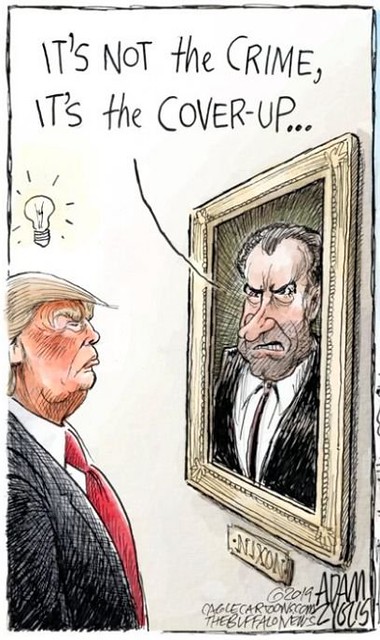 permalink   ·  vote tally
Top
+5
-0
The GOPers on the committee are going to be knocking sand out of their ears for the next twenty years from sticking their heads in it. Also - congrats to the GOP for finding a new chief weasel in Jim Jordan from Ohio. He has replaced Trey Gowdy as the GOPs previous King F#ck Weasel.
permalink   ·  vote tally
Top
+5
-0
moderator
founder
Amen to that Bob.

One thing that really bothered me about Jim Jordan today was when he pushed Gordon Sondland to state that the only first-hand direction he had from Trump regarding Ukraine was, "no quid pro quo." Jordan really emphasized that point and made a big deal about it, implying if the only first-hand testimony the Democrats have is Trump saying, "no quid pro quo," then the impeachment was over and Trump was completely exonerated.

At first I thought Jim Jordan had a point.

Jim Jordan had to have known, when he drove Sondland to say that Trump had said, "no quid pro quo," that the timing of that conversation was after the cat had been let out of the bag.

Jim Jordan's attempt to use a misleading quote to defend Trump is exactly why I have a low opinion of him and his cohorts on these impeachment hearings.
permalink   ·  vote tally
Top
+6
-0
supporter
While Jim Jordan is bad, the GOP hypocrite who really makes me want to hurl is Devin Nunes. This article is great:

Nunes, who who once co-sponsored a bill entitled the “Discouraging Frivolous Lawsuits Act”, is suing a fake cow on Twitter for $250 million.

Amazing.
permalink   ·  vote tally
Top
+5
-0
supporter
This country has never been subjected to such corruption as Trump has engendered. They are all dirty from top to bottom, from the president, attorney general, secretary of state, white house counsel, secretary of energy, etc. If that isn’t bad enough the congressional republicans are hell bent on condoning this travesty and assault on our national integrity. It’s enough to make one puke.
permalink   ·  vote tally
Top
+5
-0
SPONSORED
supporter 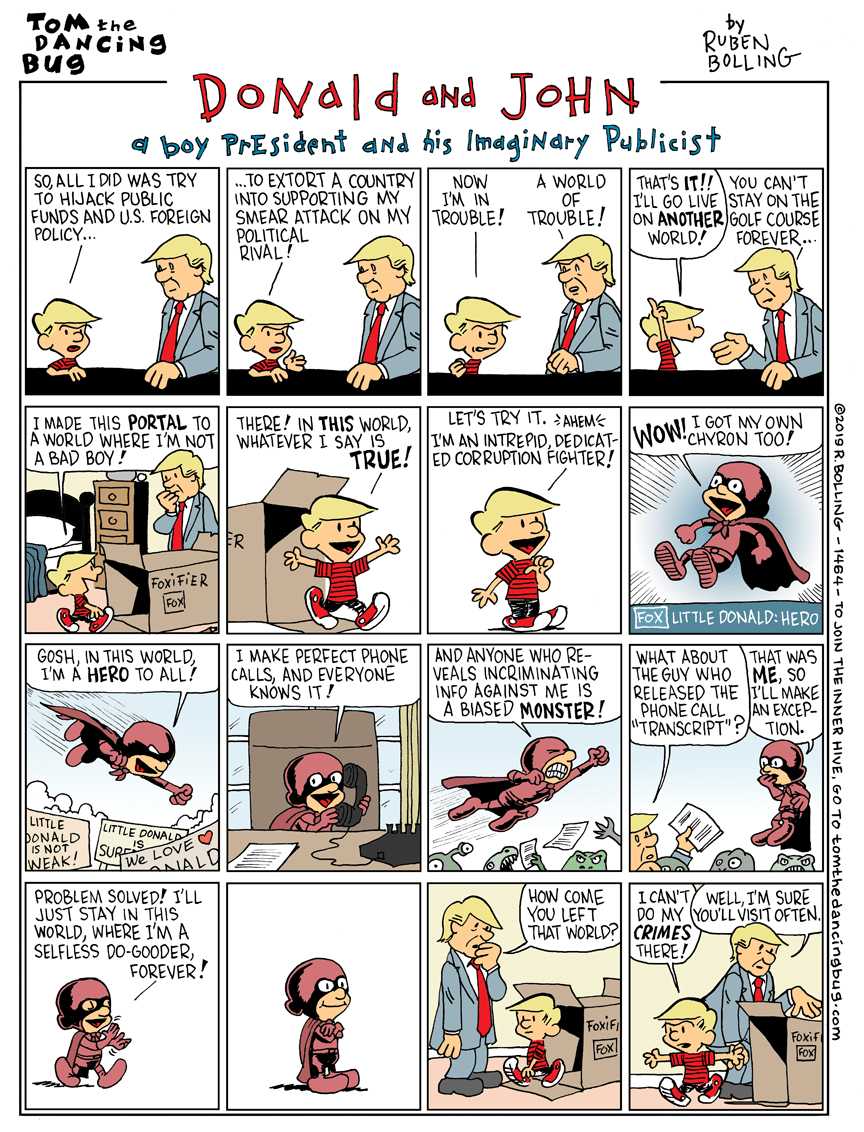