I think it was last week that pumpkinhead was congratulating Mueller on his great work. For some strange reason, that has changed.
permalink   ·  vote tally
Top
+4
-0
supporter
Very true, Bob. But how does one categorize?

Is the statement "Countless people in the FBI told me..." an alternative fact or a slip of the tongue? It certainly couldn't be a lie, as it was uttered by the White House press secretary.

Hopefully the genius we all know as "The Man From the Snowy Plains" will enlighten us with the Scriptures...(The Book of Fox: Chapter Hannity, Verse Lie).
permalink   ·  vote tally
Top
+4
-0
Oh sorry for your grief. I was listening to Trump with Wounded Warriors.
permalink
Top
+0
-0
supporter
I can just imagine the lies coming out of THAT.....


"I promise I won't privatize any of your wonderful VA health care."

permalink   ·  vote tally
Top
+1
-0
supporter
Cool story snowy. President "five-time deferment Bone Spurs" has no business addressing those heroes. Trump is a coward, traitor, and liar of epic magnitude. He has also attacked John McCain's war record and belittled Gold Star families. He is a disgrace.
permalink   ·  vote tally
Top
+5
-0
supporter
Way back, once upon a time, too long ago for members of congress to recall, William Barr was aka, ‘Coverup-Bob.’ That was when, as Attorney General, he was busy obtaining pardons for Caspar Weinberger’s gang and sweeping Reagan’s Iran-Contra criminal monkey business under the bed. Now he’s ‘Coverup-Bob, the Fixer,’ Trump’s lackey.
permalink   ·  vote tally
Top
+2
-0
moderator
founder
The look on the Easter Bunny's face is priceless: 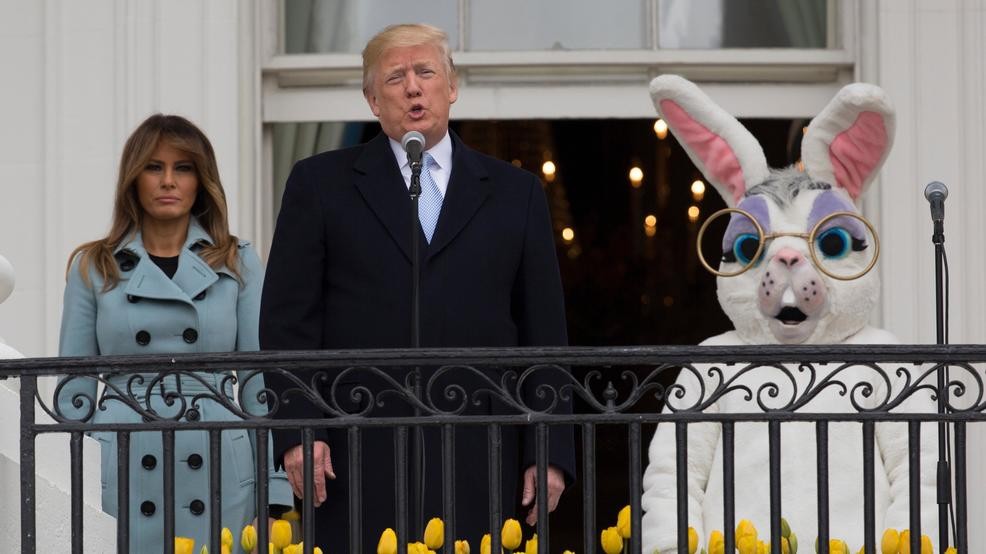 Amorette Allison wrote:
tRump supporters do not care that he lies, cheats, steals or sells us out to Russia. All they care about is he is an ignorant racist just like them.

Here ya go Oddjob...Hillary figured out WHAT HAPPENED!!!!..GUNNAR and the clan now have their Leader back.
permalink
Top
+0
-0
supporter
https://www.theatlantic.c...nt/587785/

These statements come from a longtime Republican lawyer and law school professor. Trump supporters, I hate to break it to you, but your orange disgrace of a president did obstruct justice and should be impeached.
permalink   ·  vote tally
Top
+6
-0
Well then, what's the goddamned hold up? If Mueller delivered the goods, then the Democrats need to put up or shut up. They run the House.

JHC, the whole freaking World is sick to death of all the Democrats and their lap dog media, whining and sniveling about Trump and Putin "stealing" the election from the Harpy. It didn't happen, and Mueller said as much. That's the reality of the situation and you need to give up the TDS and get your head around the facts.

There isn't going to be an impeachment proceeding against Trump because Mueller's "obstruction" ramblings are a whole volume of nothing but navel-gazing. And since the 20-30 no-name losers, mud wrestling for the nomination have less than nothing to offer, he's most likely going to be re-elected.

Deal with it.
permalink   ·  vote tally
Top
+2
-0
One of the hold ups is the White House's refusal to honor any of the Democrats subpoenas.Not surprising since King Donald obviously thinks he is above any and all law.
permalink   ·  vote tally
Top
+5
-0
supporter
The hold-up is Barrs refusal to comply with a subpoena to appear before the house judiciary committee and release the full unredacted version of the Mueller report to the committee. Too much information about Trump's obstruction of justice crimes is still hidden in the report. What the hell are you supposed to do with a report filled with pages that look like this?

If the redacted report is this damaging to Trump, then the whole report needs to be released.

If Barr refuses to comply with the subpoena and provide the unredacted report, he should be charged with contempt of Congress and thrown in jail until he complies. Barr made it perfectly clear today during his testimony that he intends to protect the president. And in ignoring Mueller's concerns that his 4-page summary "did not fully capture the context, nature, and substance of this Office’s work and conclusions", Barr has also made it clear he doesn't care about the Mueller report.

The only people sick of hearing about this are all you snowflakes whining about the Democrats being mean to Trump. The Congress has a constitutional duty of oversight of the Executive branch. This episode is just more evidence of Trump's disdain for the Constitution.

[Edited by tom regan (5/1/2019 10:14:20 PM)]
permalink   ·  vote tally
Top
+7
-0
supporter
I think the Mueller report lays out a clear path for the indictment of Agent Orange, once he is out of office. Everything this jackwagon is doing is on-going collusion with Russia. Trump is using the Office to work his way out of a bunch of debt with the Russian mafia.

At this point, I'm not in favor of impeachment proceedings. As bad as Trump is, impeachment would give us Pence, which is jumping out of the frying pan and into the fire. Progressives simply need to get on with communicating the value of their common sense approach to solving our current concerns like healthcare, immigration, infrastructure, and desertification. If they lead the way on these issues, Agent Orange will be removed by the voters and will report to the Martha Stewart confinement and crochet center.
permalink   ·  vote tally
Top
+5
-0
moderator
founder 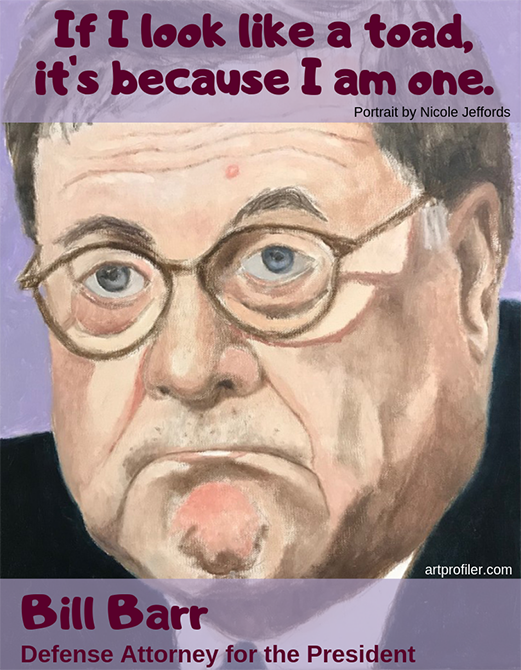 permalink   ·  vote tally
Top
+4
-0
supporter
So Donny Tiny Hands has now invoked "Executive Privilege" to prevent Congress from getting their hands on the unredacted report.

I am confused. If the Mueller report completely exonerates Trump, then why won't he just let them read the report?
permalink   ·  vote tally
Top
+6
-0
Mueller wrote the report. The whole report, and based on his analysis of everything, including the redacted information, he stated:

“The Special Counsel’s investigation did not find that the Trump campaign or anyone associated with it conspired or coordinated with Russia in its efforts to influence the 2016 US Presidential Election.”

“While this report does not conclude that the President committed a crime, it also does not exonerate him,”

If Mueller didn't charge after two years of digging the dirt with every legal means available to him, there is no "smoking gun" in the redactions. The incessant ranting about them is just more lunacy.

The Democrats and their lap dog media spent 2 1/2 years promoting a hoax on an ocean of lies and Mueller could find no course other than to blow that up in their faces. The Democrats know full well now, that Mueller handed the ball to Trump and their greatest fears will soon be realized when the indictments begin to fall in the real conspiracy to affect the outcome of the 2016 election.

Don't think for a minute that this is over. In spite of what you would like to think, Trump is not crazy....He sure as hell is vindictive, though.

The Democrats know full well now, that Mueller handed the ball to Trump and their greatest fears will soon be realized when the indictments begin to fall in the real conspiracy to affect the outcome of the 2016 election.

Yes!! Let's do it. Put it all out on the table for everyone to see. Release the full Mueller report, grand jury testimony, Trump's tax returns, go after Hillary for the 100th time! Maybe the GOP will be able to charge Hillary with an actual crime after 20 odd years. Go after Obama for whatever reason. Full transparency. Let the American people see who the corrupt politicians truly are.
permalink   ·  vote tally
Top
+2
-0
moderator
founder 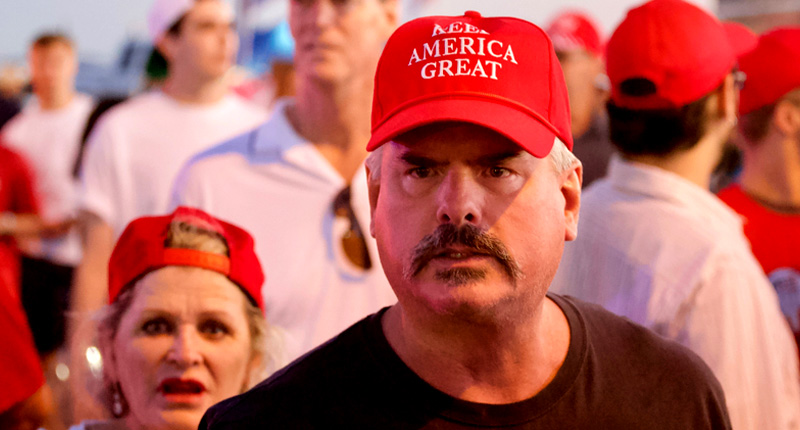 1. Practicality Trumps Morality
2. The Brain’s Attention System Is More Strongly Engaged by Trump
3. America’s Obsession with Entertainment and Celebrities
4. “Some Men Just Want to Watch the World Burn.”
5. The Fear Factor: Conservatives Are More Sensitive to Threat
6. The Power of Mortality Reminders and Perceived Existential Threat
7. The Dunning-Kruger Effect: Humans Often Overestimate Their Political Expertise
8. Relative Deprivation — A Misguided Sense of Entitlement
9. Lack of Exposure to Dissimilar Others
10. Trump’s Conspiracy Theories Target the Mentally Vulnerable
11. Trump Taps into the Nation’s Collective Narcissism
12. The Desire to Want to Dominate Others
13. Authoritarian Personality
14. Racism and Bigotry

Read all about it here.

Psychology Today wrote:
Terror management theory (TMT) attempts to explain a type of defensive human thinking and behavior that stems from an awareness and fear of death. According to TMT, death anxiety drives people to adopt worldviews that protect their sense of self-esteem, worthiness, and sustainability and allow them to believe that they play an important role in a meaningful world. Human survival instincts, and the need to reinforce cultural significance in the face of death, often result in displays of prejudice, or the belief that the group with which one identifies is superior to other groups. In this way, people confirm their self-importance and insulate themselves from their deep fear of merely living an insignificant life permanently eradicated by death. TMT proposes that individuals are motivated to develop close relationships within their own cultural group in order to feel immortal, to convince themselves that they will somehow live on—if only symbolically—after their inevitable death.