This wall is an unconstitutional grab of Congressional powers. Trump will unilaterally take billions of our dollars, already constitutionally appropriated for the Department of Defense, meant to benefit our troops and their families.

When are the Republicans going to see this orange headed want to be dictator for what he is, a traitor and a stain on our Republic? 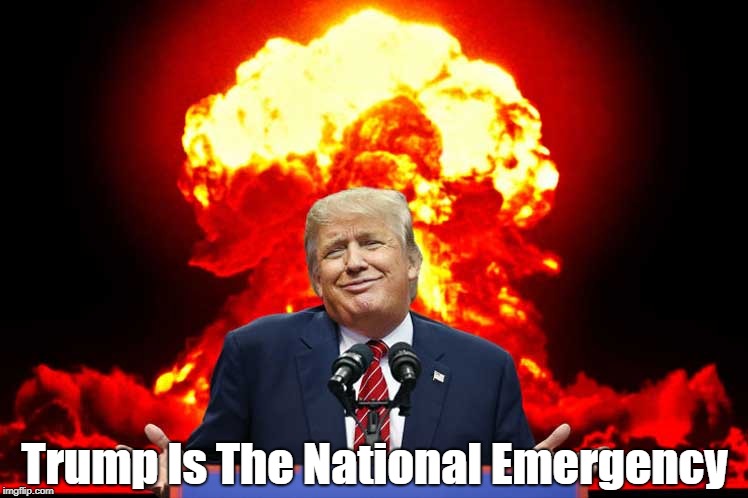 permalink   ·  vote tally
Top
+2
-0
"I didn't need to declare an emergency for the wall,I coulda built it slower,I just wanna get it done" If the dumbass didn't need to declare an emergency,he probably shouldnt have. Whatta dweeb.
permalink   ·  vote tally
Top
+4
-0
moderator
founder
I hope he was read the Miranda Warning before he said that. 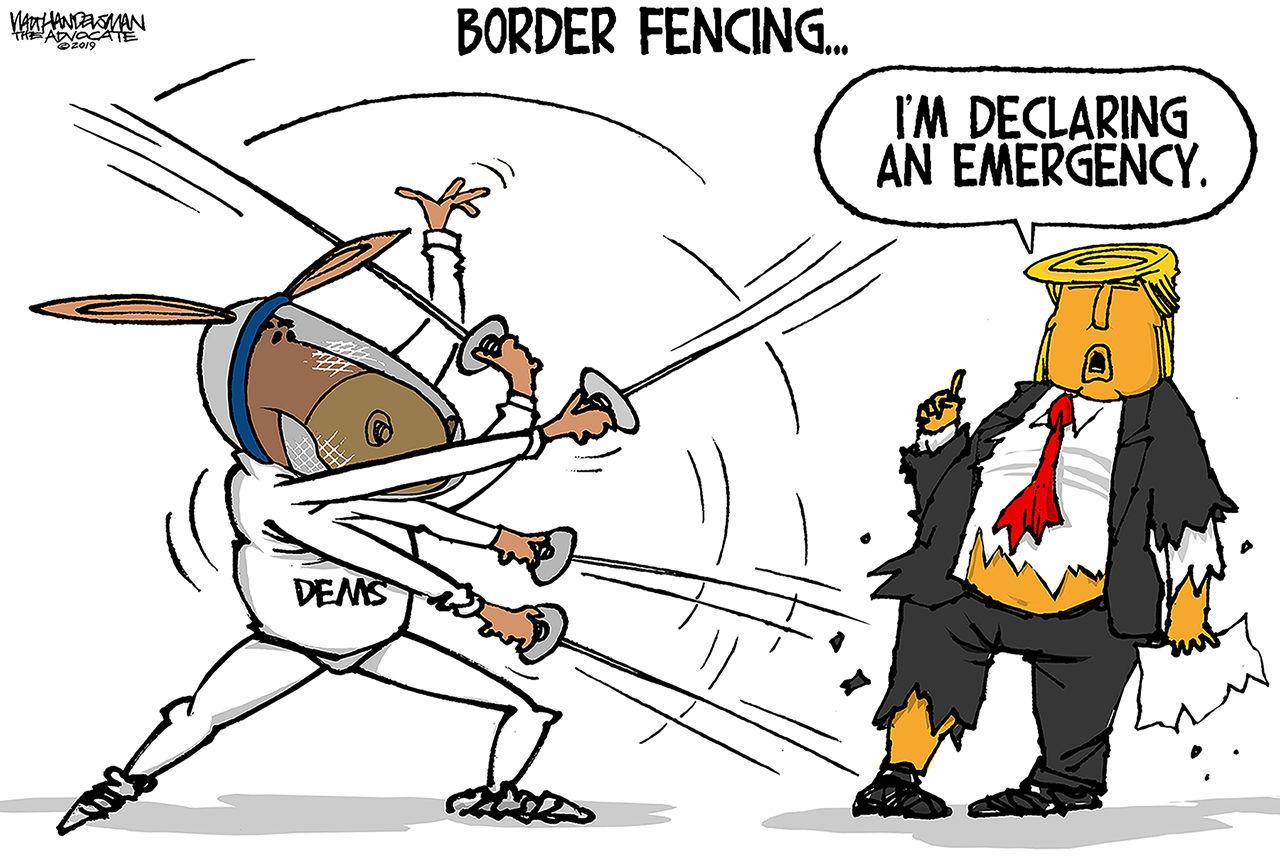 Walt Handelsman
New Orleans Advocate
permalink   ·  vote tally
Top
+1
-0
supporter
I feel so much safer knowing that President Trump is managing this emergency crisis from the golf course at Mar-a-Lago this weekend. 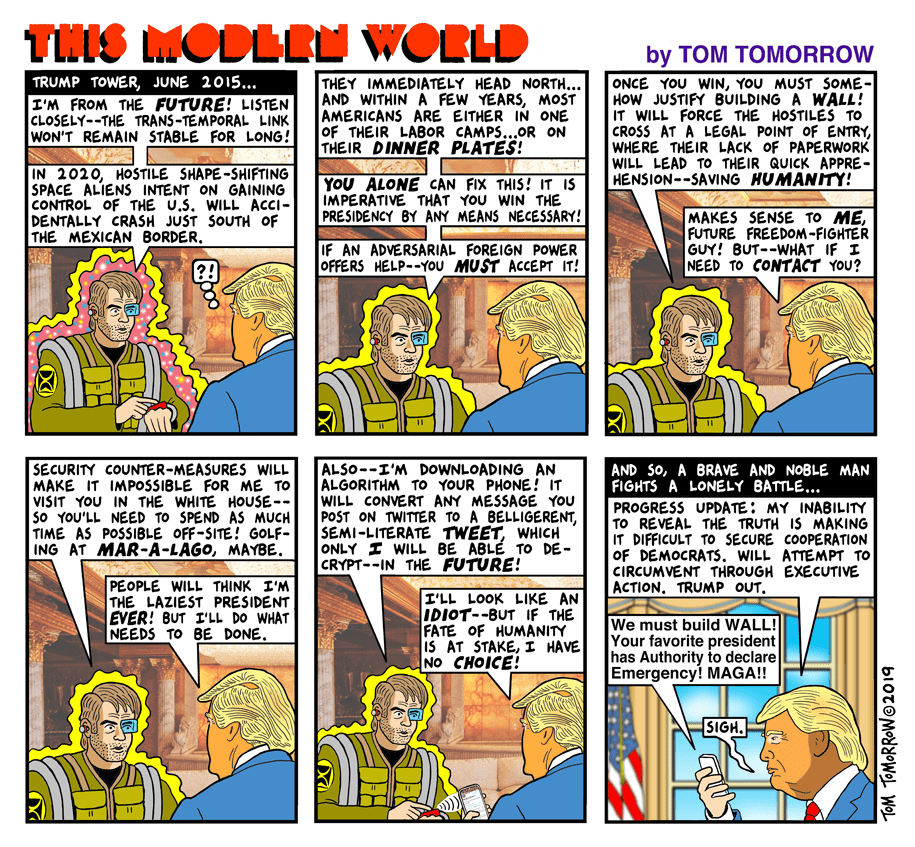 permalink
Top
+0
-0
supporter
Trump's supporters will never see what a disaster he is is for our country and the damage he has done to our form of government. Their brains have been short circuited by fear. Trump has mastered a fear mongering type of manipulation. The GOP has noticed and is now using the word socialism to instill even more fear in the Fox news watching crowd. Trump supporters are beyond help. They are just too scared to think clearly.

tom regan wrote:
Trump's supporters will never see what a disaster he is is for our country and the damage he has done to our form of government. Their brains have been short circuited by fear. Trump has mastered a fear mongering type of manipulation. The GOP has noticed and is now using the word socialism to instill even more fear in the Fox news watching crowd. Trump supporters are beyond help. They are just too scared to think clearly.

What "damage" to "our form of government" has Trump managed to accomplish in two short years? Be specific and cite credible references, please. How would any individual action by Trump be inconsistent with, or more despicable than Obama's "pen and phone" imperialist legislation from the Oval Office?

Interesting article from September, 2016. The good doctor must have slung more gin bottles at the wall on election night than Hillary did. I don't think Bobby Azarian Ph.D. would know the difference between fear and rage if it bit him in the ass. He reads like the kind of "researcher" who would put you in front of a firing squad for having the wrong bumps on your head.
permalink   ·  vote tally
Top
+1
-4
supporter
Ummm....declaring a national emergency to thwart the authority of Congress to allocate federal spending? A real life Constitutional crisis?

Did you have a stroke, Oddjob? Are you sitting in a wheelchair in an Elko nursing home in your wheel chair with your sippy cup watching Hannity? If not, please get with the program.
permalink   ·  vote tally
Top
+4
-1
supporter
I know it's a waste of time, but here you go, Oddy. I shudder to think about what you believe are credible sources.

1) Violation of separation of powers. (I even used a nutter right-wing website just for you Oddy)
https://www.cato.org/blog...ion-powers

2) Attacking the 1st Amendment to the constitution.
https://www.cato.org/publ...ss-freedom

3) Attacks on an independent judiciary (I suspect you think the American Bar Association is a left-wing organization)
http://www.abajournal.com...dependence

With the risk of validating your "ODS", I will concede that Obama pushed the bounds of statutory limits with some of his actions. In the face of unprecedented obstructionism, he had little choice. But he never blatantly attacked our form of government. Trump simply hates the separation of powers. He's too stupid and narcissistic to understand checks and balances.

This also brings up the bigger question of what will Trump do when he loses in 2020? Will he insight all of his followers to violence with his lies, fear-mongering and claiming a fraudulent election? I see this as a real possibility.
permalink   ·  vote tally
Top
+3
-1
supporter
Oddjob wrote:

What "damage" to "our form of government" has Trump managed to accomplish in two short years? Be specific and cite credible references, please.

Okay Oddjob, how about Donald Trump, head of the Trump crime family, thumbing his nose at custom and the Constitution. He is setting precedent for future presidents and elected representatives to refuse to resolve conflicts of interest. He uses his Twitter account (bully pulpit) to divide rather than unify Americans and to settle personal scores in a sustained assault on freedom of the press, freedom of assembly and freedom of speech. Trump is fostering creeping authoritarianism. As he did on the campaign trail, he has continued to do violence to both America’s political norms and its constitutional values, striking an authoritarian tone and railing against his many enemies. He embraces and claims he “loves” various dictators while alienating and distancing us from our allies.

When Trump isn’t trashing the First Amendment, he’s busy building an inner circle of ideologues who are hostile to large segments of the American public and to the idea of government itself. Trump always picks the worst person for any position in his failed and corrupt administration.

Trump’s first pick to enforce civil rights and the rule of law at the Justice Department was Jeff Sessions. Jeff Sessions was notoriously denied a federal judgeship in the 1980s over his racism as well as his prosecution of voting rights activists who had been close to Martin Luther King. On King’s birthday Trump chose to bash Rep. John Lewis, civil rights icon and King confidant.

Trump’s anti-government group of cronies was led by EPA Scott Pruitt, the Oklahoma attorney general who had repeatedly sued the agency he was appointed to lead. Pruitt attempted to strike down limits on emissions of neurotoxic mercury while attorney general. When even his Republican enablers couldn’t take Pruitt’s stealing from the taxpayers any longer, Trump appointed Andrew Wheeler, a fossil fuel lobbyist, to head the EPA. Wheeler is busy stripping regulation to control mercury and air toxins. Perhaps even worse, Wheeler has removed regulations protecting millions of acres of water ways.

How about his appointing Energy secretary Rick Perry who famously wanted to eliminate the department he was picked to lead. Then there is Trump’s pick for Treasury secretary, Steve Mnuchin, who profited from both the housing bubble and its aftermath. Mnuchin pivoted from his mortgage desk at Goldman Sachs to running a bank described as a foreclosure machine. This bank tossed veterans and military service members out of their homes. Mnuchin’s “number one priority” is to “strip back” the Dodd Frank financial reforms that Congress passed in 2010 to prevent another housing-market crash.

While Oddjob embraces Trump and his crime family, a majority in this country has had its fill of Trump.
permalink   ·  vote tally
Top
+5
-1
Regan on BHO "But he never blatantly attacked our form of government."

That Marxist-Communist was the worst thing that ever happened to this Country on so many levels. He is the reason there will never be any more "bipartisanship", and that's exactly what he set out to accomplish. When the shooting starts, you can blame Obama for lighting that fuse.

For the rest of you; yawn. Let me know when he has been indicted or a Bill of Impeachment has been issued for these "crimes" you speak of. Impeachment isn't going to happen and the Democrats are so fractured and nutty they have no viable candidates to field.

Frankly, I have never been able to stand the guy. He’s an arrogant, blowhard asshole, and he always has been. But, since you guys decided to force Barack Obama down our throats…twice, we give you Donald Trump. You earned him. And just knowing that he’s in your head, all day, every day, like fingernails on a blackboard….. Just based on that fact alone, I wish there was two of him.

Kentucky Sheriff Struggles to Provide Law and Order as County Struggles With Money
permalink
Top
+0
-0
supporter
I would be interested in knowing what Obama did or promoted that would be classified as Marxist-Communist. Karl Marx was obviously on to something when he said, shortly before his death, “may the bourgeoisie long have cause to recall my carbuncles.”

I see you didn't refute my evidence that Trump is attacking our form of government. Is that because you know it's true? Or maybe you're okay with a wannabe dictator defecating on the Constitution as long as those sweet, sweet liberal tears keep flowing. Party before country. The GOP has turned into the party of hypocrites and cowards.

And yeah, Obama lit the fuse alright. By being the first black president. And Trump poured gas on the fuse with his lies and fear-mongering.
permalink   ·  vote tally
Top
+3
-0
supporter
How many tissues/night do you think oddy goes through as he thinks about Obama being 'forced down his throat'?
permalink   ·  vote tally
Top
+5
-0
supporter
My thoughts exactly Bridgier. It's not like Obama was thoroughly defeated in the popular vote. That is President being shoved down your throat. 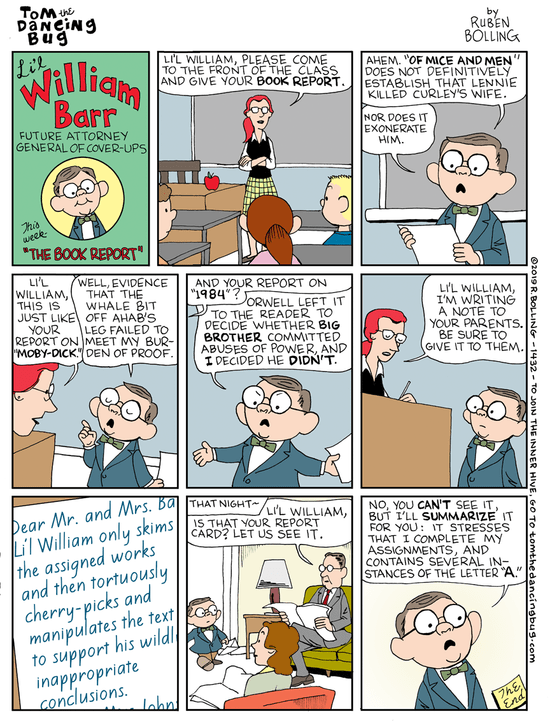