No, he won't get impeached, due to the Republican-controlled Senate. But examining his total unfitness for office in the House chambers is a worthy exercise. The fact that he has shut the government down over a stupid wall, and that the Senate refuses to do anything about it, is pretty mind boggling.
permalink   ·  vote tally
Top
+4
-2
SPONSORED
supporter
Nancy Pelosi OWNS that little bee-yatch trump. Although it will never happen, she would be my choice for president in 2020.
permalink
Top
+0
-0
supporter
A Russian spy, a sexual predator and a billionaire walk into a bar.

I love when they start feeding on each other.
permalink
Top
+0
-0
supporter

Gunnar Emilsson wrote:
Nancy Pelosi OWNS that little bee-yatch trump. Although it will never happen, she would be my choice for president in 2020.

I predict she will be President before the 2019 Eastern Montana Fair.

permalink   ·  vote tally
Top
+1
-2
supporter
Not quite, Shu. MCD forum flooding would be starting a new topic for every online news article she reads. I stick to one topic, the gross incompetency and probable criminality of President Trump. Admittedly, this is a vast topic that would be worthy of several independent threads.
permalink   ·  vote tally
Top
+3
-0
I have a good idea. All you people posting in this thread should move to California, California secedes from the Union, we build a wall around California, and you can elect Nancy Pelosi as president.
permalink   ·  vote tally
Top
+1
-0
supporter
Not too bad of a plan. Then the rest of you can don cinderella dresses and live in fantasy land.
permalink   ·  vote tally
Top
+5
-0
supporter
We should start by stopping the insane piece of ****, on his vanity wall. Write Tester and tell him. It's time to stop the insanity and we'll get rid of Agent Orange later. As for you supporters of Agent Orange, where were you when we fought and dealt with Russia over the decades? I was in the service, for a time, and recall the assault and attack on our system of government by the Russians and other communist governments. Now we have a Russian agent in the White House doing everything he can to take us down. In this connection, you Republican wimps make me ill.
permalink   ·  vote tally
Top
+3
-0
Fantastic idea Daniel, throw in Oregon and Washington state. We'll pop a Nuc on the San Andreas Fault. Call it Dream Land...Tester can be Nancy VP and never have one of those darn elections ever again.;^0
permalink
Top
+0
-0
supporter 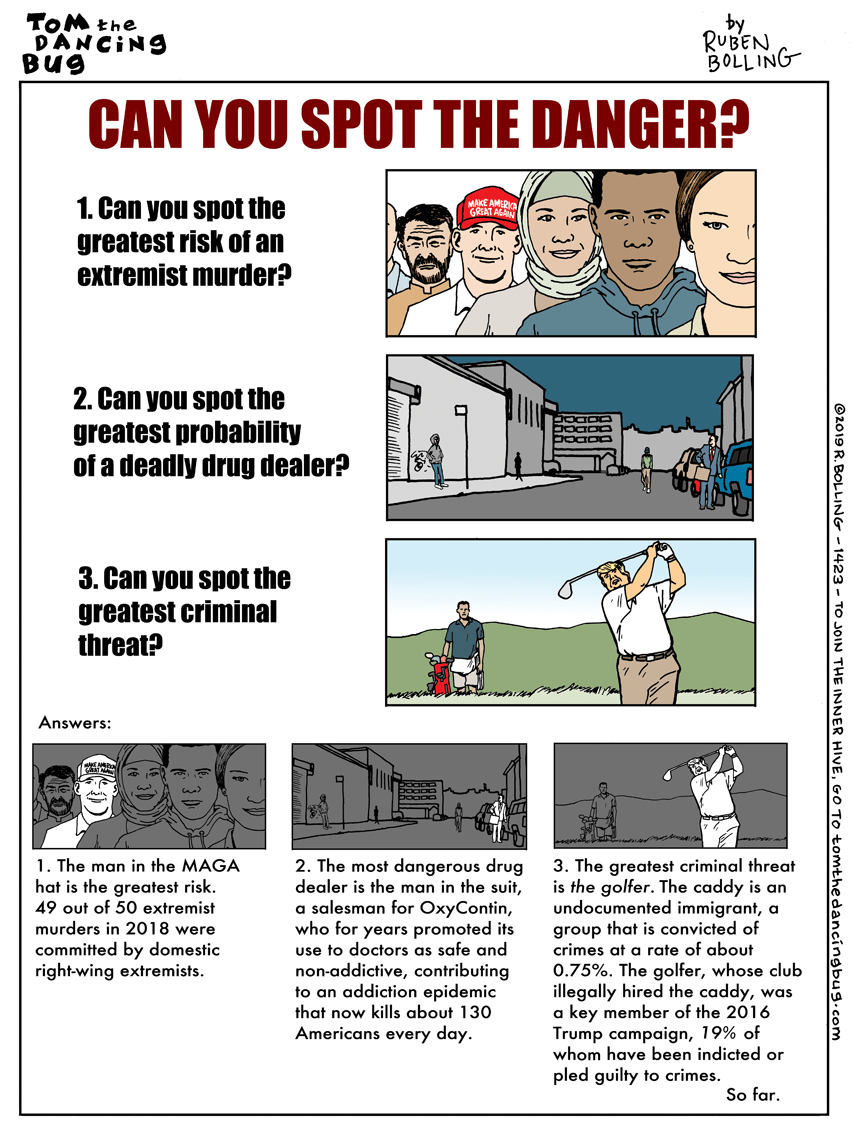 permalink   ·  vote tally
Top
+6
-0
Pretty awesome, Gunnar! As usual, Snowy......Huh!
permalink   ·  vote tally
Top
+4
-0
supporter
I would like to know, Trump supporters, why you think our intelligence experts are wrong and Trump is right? I personally cannot fathom how your brains work. Is it the Deep State conspiracy theory? Or are you just slow and feel more comfortable with a strong man in power?

I really, really would like to begin a dialog with you, to try to bring the country together, but all I can see is a vast swamp of ignorance and stupidity.
permalink   ·  vote tally
Top
+1
-0
"Dialog for Dummies"
by
Gunnar Emilsson

Gunnar Emilsson wrote:
I really, really would like to begin a dialog with you, to try to bring the country together, but all I can see is a vast swamp of ignorance and stupidity.

Although....what do you have to be snarky about? Hillary lost more than two years ago. Why can't you get over that? What's so hard for you Trumpies to embrace, "It's time to move on and run the country?"
permalink
Top
+0
-0
supporter
Oldie but goodie. Can't remember if I posted it before.

Q. What's the difference between a garbanzo bean and a chick pea?

Start with a good case of TDS!

For those of you who don't speak trumpian, or watch Fox News or other right-wing Tump propaganda, TDS stands for Trump Derangement Syndrome. Basically, anyone who believes the Meuller investigation isn't illegitimate, the FBI isn't corrupt, that 37 indictments/convictions stemming from the Mueller investigation may suggest collusion between the Trump campaign and Russia. Think that a wall on the entirety of the US, Mexico border is the least effective and most expensive way to secure the southern border, or generally hate the chaos, incompetence, racism and staggering corruption of the Trump administration and Trumps family, have TDS. Essentially Trump supporters think 60% of the country has TDS.
permalink   ·  vote tally
Top
+4
-0
supporter
I just want to say that John McCain's new book, "The Restless Wave" is such an excellent read. He has a Chapter he calls, "Nyet" which is Russian slang for "NO". Under "Nyet" he stated "Know Thine Enemy". To pull out of the INF (Intermediate-Range Nuclear Forces Agreement) is another Gift for Russia.
permalink   ·  vote tally
Top
+3
-0
Oh Darn....No Collusion...So what are the dumocrats going to make up next....

Not so fast. Do you recall the Senate hearing on Attorney General Barr? Isn’t it a little odd that about a year before his appointment to AG he wrote his little ‘unsolicited’ manifesto expressing his opinion that a sitting president cannot obstruct justice or be indicted for criminal acts? Barr’s ethical integrity ranks with Trump’s. Foreign interference in our electoral process is serious. These people are tribal and traitors.

Supposedly the special counsel was appointed to avoid conflicts of interest while investigating the connection between the executive branch and the Russians. Sounds great except that this not how it works. Here the Trump crime family and its employees appointed the special counsel. Then, after the special counsel spends over a year and millions of dollars investigating collusion and conspiracy between Trump and the Russians, his report is turned over to the executive branch (Barr), who is conflicted. Barr then reports to congress his opinion of what the investigative report says. At best his rendition of the Mueller report is akin to shabby, hearsay evidence, a conflicted 2nd hand opinion to as the truth of the matter asserted.
permalink   ·  vote tally
Top
+4
-0
moderator
founder
Mueller's report states that Russia interfered in the 2016 U.S. presidential election with the goal of helping Donald Trump win the election. And Republicans are cheering this? I would not be proud to have won an election under such circumstances. It certainly casts a cloud over the legitimacy of the 2016 election.
permalink   ·  vote tally
Top
+3
-0
supporter
"The Trump crime family".....I love it.

They need some good Mafia nicknames.

Fortunately for us law-abiding citizens, the internet remains a treasure trove of existing nicknames for these eventual prisoners.

Why don't you start your own Clinton thread, Snowflake, where all your "patriot" friends can join you?
permalink   ·  vote tally
Top
+4
-0
moderator
founder