3. For those of you who are not good at math, that means a border wall would make absolutely no difference to the 79% of illegal immigrants who enter this country legally but overstay their welcome.
permalink   ·  vote tally
Top
+5
-0
SPONSORED
moderator
founder
Math is hard.
permalink   ·  vote tally
Top
+2
-0
Here are some more fun facts. Most drugs are smuggled over the border in vehicles through ports of entry. Tunnels have also been used. The border wall is a gigantic waste of money. But, if it makes the "libtards" angry, money well spent. #MAGA

https://www.politifact.co...ed-states/
permalink   ·  vote tally
Top
+6
-1
banned
Well I guess give credit due when credit is due.According to your chart GWB did an amazing job with the border,thank you for pointing that out.
Math is hard,but impossible for democrats.Even after a democrat mayor warned an entire california city of coming ICE raids and most illegals on the ICE list skeedaddled about 200 were still apprehended and of the 200 over 100 were convicted violent criminals.Maybe california should be a place where all democrats are sent.
permalink   ·  vote tally
Top
+1
-1
supporter
Here is a better idea than a wall.

"I also see an opportunity for Mexico and the United States to work together on a much larger scale. Rather than spending billions of dollars on a border wall, here is an alternative vision: regenerating the Rio Grande, which forms more than half of the border, to form the core of a binational park that showcases our spectacular shared landscape."

http://theconversation.co...gain-73111
permalink   ·  vote tally
Top
+3
-0
I thought we were debating the wall and how it's a pointless waste of money. We can also talk about sanctuary cities too I guess.

I live in a sanctuary city. Denver has all the typical big city crime. Mostly theft, drugs, vandalism etc.. with an occasional shooting or murder. By no means high on the list for big cities. Denver is also about 30% Hispanic, and many, I'm sure are illegals. As a matter of fact, I went to the Broncos, Browns game with a dreamer. Young kid, about 20 who came to the US when he was 3. He's hardworking, speaks better English than most Trump supporters I know, and would like to join the military to serve his country.

I don't see how Denver Police Department cooperating with ICE to deport people like this, helps make Denver safer. Actually, there is strong evidence that suggests if local law enforcement does cooperate with ICE, the city is less safe.

"Assisting in federal immigration enforcement efforts can drive a wedge between local law enforcement officials and the communities they serve, which undermines public safety. According to a report issued by the International Association of Chiefs of Police."

"[s]tate and local law enforcement should not be involved in the enforcement of civil immigration laws since such involvement would likely have a chilling effect on both legal and illegal aliens reporting criminal activity or assisting police in criminal investigations."

It seems to me that DPD would have more success finding these violent criminal illegals if the community members that might assist the DPD in their investigations trusted the police not to report them to ICE.

We need comprehensive immigration reform with citizenship for dreamers and a reasonable pathway to citizenship for illegals currently in the county who have not committed any violent crime. And continued funding for effective borders security.
permalink   ·  vote tally
Top
+6
-0
banned
Mr.obama and Mrs. male obama wife. I say to you. Tear down that wall. Well walls work if you remember that one in Germany for example. A friend I worked with that somehow,the US Army must have teleported him all over Europe to get him in to every major battle there was in WWII. Worked with him for 11 years. He did not want that wall to come down. obama and his illegal male wife have a wall,they must think a wall works. I have walls on my house and they seem to work. China has a wall. A wall alone will not work alone in this day and age but it will give headaches to a lot of illegals and they will stop coming to the southern border. Go to mexico,people come from many miles away to beg and they make a good living at it. Remember those , well I suppose there were many,that were begging at walmart here and some claimed to be veterans ect. and were here just to beg and were staying at a local hotel? I do. Then a couple of them had a big fat dog with them. Well I guess if they were actually starving they could butcher the dog in their hotel room and eat it. That dreamer that wants to serve his country in the military? Tell him to go home and enlist in his country`s military and apply to come to the US legally.
permalink   ·  vote tally
Top
+0
-7
moderator
founder
Rolling Stone: Trump Lies About ’10 Foot Wall’ Around Obama’s Home. There Isn’t One
permalink   ·  vote tally
Top
+5
-0
banned
I really do not know if Mr. and Mr. obama have a wall or not. I am not there and would not waste my time to do a drive by if I was. It is one thing to get sh!t on your hands and clothes when you are branding but getting sh!t on your eyeballs to see Mr. and Mr.obama`s house is not my cup of tea. Saw the fence or wall I think on cnn or someplace so it was very reliable. Do you think Mrs.obama uses viagra? WoW what a retinal searing picture that is of the muscular Mrs.obama putting it to obama doggy style. Each to their own I guess. Live and let live.
permalink   ·  vote tally
Top
+0
-6
supporter
President Obama's home in DC is actually quite nice looking. I like their iron fence design better than ours.
https://www.sfgate.com/ne...500362.php
permalink   ·  vote tally
Top
+4
-0
banned
I see a wall with a fence on top of it approximately 10ft. tall.That is from the pictures you linked.Maybe Mr. and Mr. obama did not have full funding and can fill the fence in with bricks when funding is available.
permalink   ·  vote tally
Top
+0
-4
supporter
The article says that the fence is in front of all of the homes. Maybe, Mr. Trump meant 10' long. But then, the Former First Lady did say..."When they go low, we go High"☺
permalink   ·  vote tally
Top
+5
-1
banned
Why didn`t Mr.obama and his wife who has a penis just put a little length of wall here with big gaps to another little length of wall and then some more gaps? We need a wall like Mr.obama,who is illegally married to his wife with a penis,a wall with no gaps in it.If the secret service needs a wall for one house think of how much more manpower for the size of the area that they need to protect compared to our border agents.Name a major wall that was completed that failed.Just look at how effective the Berlin wall was.Just think about this for a minute.Someone moves in to your neighborhood and all of the sudden a wall has to be built around the neighborhood,kind of like a gangster moved in. There goes the neighborhood.
permalink   ·  vote tally
Top
+0
-6
supporter

permalink   ·  vote tally
Top
+0
-2
admin
moderator
founder
RR01 is banned for at least a couple weeks or until they learn how to behave.
permalink   ·  vote tally
Top
+3
-0
supporter
I can't question you for that decision, Larry, but I was hoping to let RR01's ranting to go on as long as the government shutdown continues. My larger point being, look at the thoughts that goes into the posts of a Trump supporter like RR01, compared to those who have differing points of view, just alone in this thread. There is a surprising number of people in this country like RR01 who spew forth racism, hatred, ignorance, and just general stupidity/moronity over the tenets our Founding Fathers set in place in the Constitution of the United States of America. RR01 is merely a reflection of his cheetoh-colored master.

Sad.
permalink   ·  vote tally
Top
+6
-0
Thank you for banning RR01. This is a family-friendly discussion board. No one wants to read about RR01's transvestite fetish.
permalink   ·  vote tally
Top
+5
-0
supporter
Anyone planning on watching President Cheetoh lie on national television tomorrow night? I would like to see a small screen of him, with a larger screen showing a fact checker saying "wrong" over every lie the national disgrace utters.

I do have to take back my earlier pronouncements that at least Trump is better than Pence. I still despise Pence, but Trump's gross incompetence has converted me to the "he's got to go" faction.
permalink
Top
+0
-0
Gunner, I have to agree with you. Fact checking during speech would be great. Then his followers would have to see it too. I would like to watch but my wife hates his voice so much I am not sure I will be able to. Maybe I can send her to the neighbors. lol
permalink   ·  vote tally
Top
+4
-0
supporter
Mr. stable genius is feeling unloved so he is going on national TV. Because he is feeling unloved, I propose that he be provided the warm firm embrace of a straight jacket.
permalink   ·  vote tally
Top
+3
-0
supporter
One of my Trump-loving Republican friends called me out for calling Trump a liar last night, saying I get my "facts" from CNN or CNBC. No, I rely on the fact checkers from Fox News to confirm that Trump is a liar.

I just love it. A gambling website set the over/under on how many lies Trump would tell during his 9 minute speech on the border wall Tuesday night at 3.5. A rush of bets took the over. Betters were risking $145 just to win #100 if they took the over. The anointed decider, the Washington Post fact checker, counted 6 lies. The website lost over $270,000.

Man, I would have taken the over on that, any day of the week. 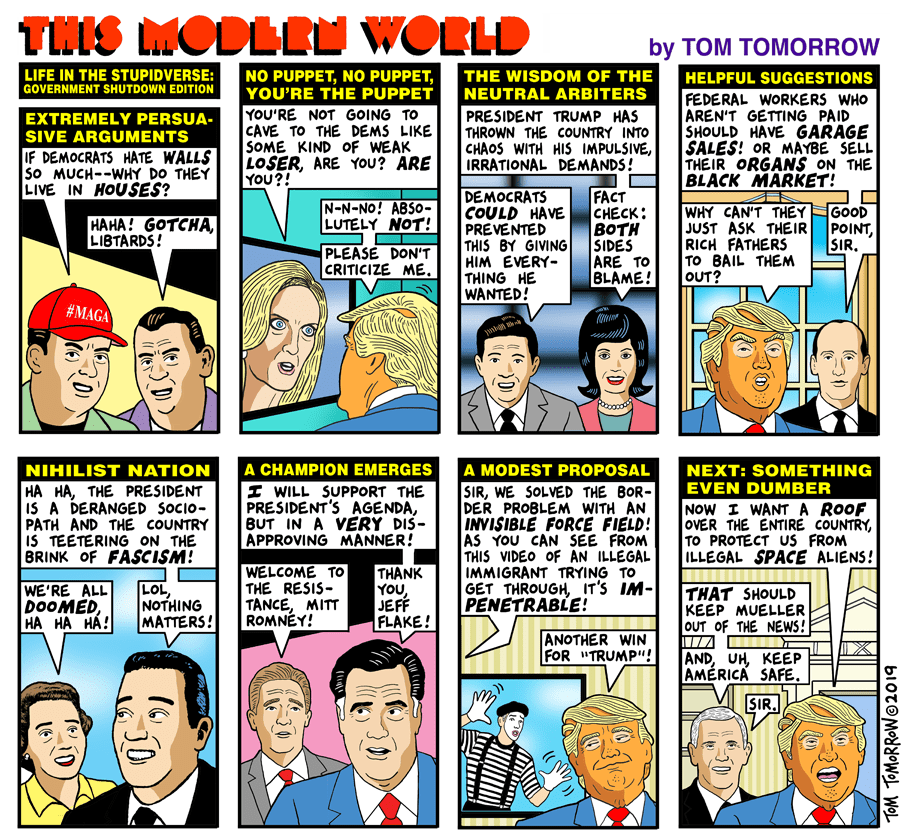 Gunnar Emilsson wrote:
Just when you think Republicans can't get any dumber.....BAM!

I just love it. A gambling website set the over/under on how many lies Trump would tell during his 9 minute speech on the border wall Tuesday night at 3.5. A rush of bets took the over. Betters were risking $145 just to win #100 if they took the over. The anointed decider, the Washington Post fact checker, counted 6 lies. The website lost over $270,000.

Man, I would have taken the over on that, any day of the week.

The first lie was when he said "Good Evening".

permalink   ·  vote tally
Top
+1
-0
SPONSORED
I appreciate John Oliver. He backs up his commentary with research and facts, unlike Fox News, The Daily Caller and other similar news sites Trump likes to quote. If nothing else, this is worth watching because of John Oliver's' imitation of a pygmy owl.