"'The idea of punishing parents who are trying to save their children’s lives, and punishing children for being brought to safety by their parents by separating them, is fundamentally cruel and un-American,' said Michelle Brané, director of the Migrant Rights and Justice program at the Women’s Refugee Commission, an advocacy group that conducts interviews and monitoring at immigration detention centers, including those that house children."

https://www.nytimes.com/2...n-ice.html
permalink
Top
+0
-0
SPONSORED
supporter
Time was, we didn't mince with words, and called these "detention centers" exactly what they were: concentration camps.
permalink   ·  vote tally
Top
+3
-0
"Nearly 2,000 children have been separated from their families at the U.S. border over a six-week period during a crackdown on illegal entries, according to Department of Homeland Security figures obtained Friday by The Associated Press. 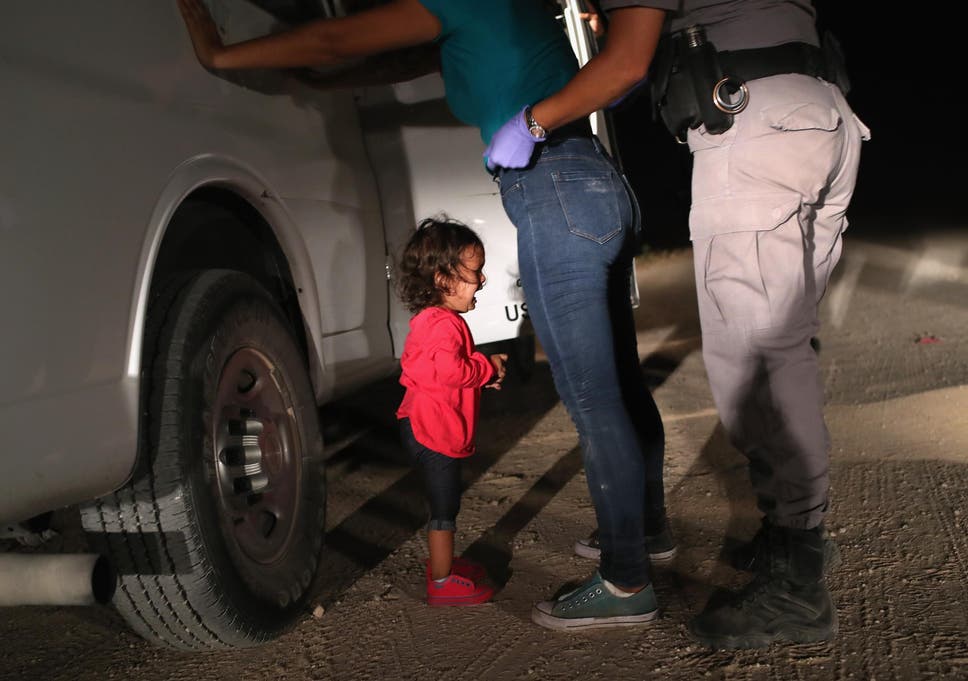 permalink   ·  vote tally
Top
+1
-1
The Trump administration's immigration policy of separating migrant children from their parents, besides being extremely cruel and traumatic, also doesn't make economic sense. When you separate children from their parents, you have to hire baby sitters, child care workers, health care personnel and administrative personnel to keep track of all the children -- many of whom are too young to speak. Administrative errors are bound to occur and some children will be lost forever. I've read that 2,000 kids have been separated from their parents in the last two months. This inhumane policy, which violates basic human rights, must be stopped immediately. Keep the families together.

Here is what Dr. Colleen Kraft, president of the American Academy of Pediatrics, has to say about this inhumane and cruel policy and how it affects children in the long-term:

Here is an article written by someone who was separated from her parents and siblings by the Nazis.

"Nazis Separated Me from My Parents as a Child. The Trauma Lasts a Lifetime" by Yoka Verdoner, The Guardian, June 19, 2018.

permalink   ·  vote tally
Top
+1
-6
supporter
I believe that Trump is using the separation of families as an means to force comprehensive immigration law through Congress. The law of course will include the great wall of Trumpia. I am sure if there is no wall provision, he will veto the law. Remember his statement about "loving" Dreamers. This love was contingent on the wall. He is going to build his wall come hell or traumatized children. He has no problem building a wall on the backs of babies. Not hard for a man with no moral character. "So Sad"
permalink   ·  vote tally
Top
+5
-0
Shu Pius wrote above: "This Tweet came from Bill Mitchell yesterday: 'Last month Democrats loved a porn star. This month they are all about family values. Well, they are flexible, I give them that!'"

Republicans also don't seem to be bothered that Trump is an admitted sex offender -- remember Trump's own words, "You can do anything. Grab them by the pu*sy. You can do anything" -- or the fact, that 19 women have accused Trump of inappropriate and illegal sexual conduct. Republican family values? Go figure!

So, it makes total sense, that those same Republicans who aren't bothered by Trump's past behavior are also not bothered by his, "you can do anything" policies -- the worst, and most inhumane policy, is separating babies and small children from their immigrant mothers. Make no mistake, these are not family values!

Trump is a monster who has instituted monstrous policies which will severely and adversely affect the babies and children in his concentration camps (otherwise known as "tender age detention centers") for the rest of their lives. 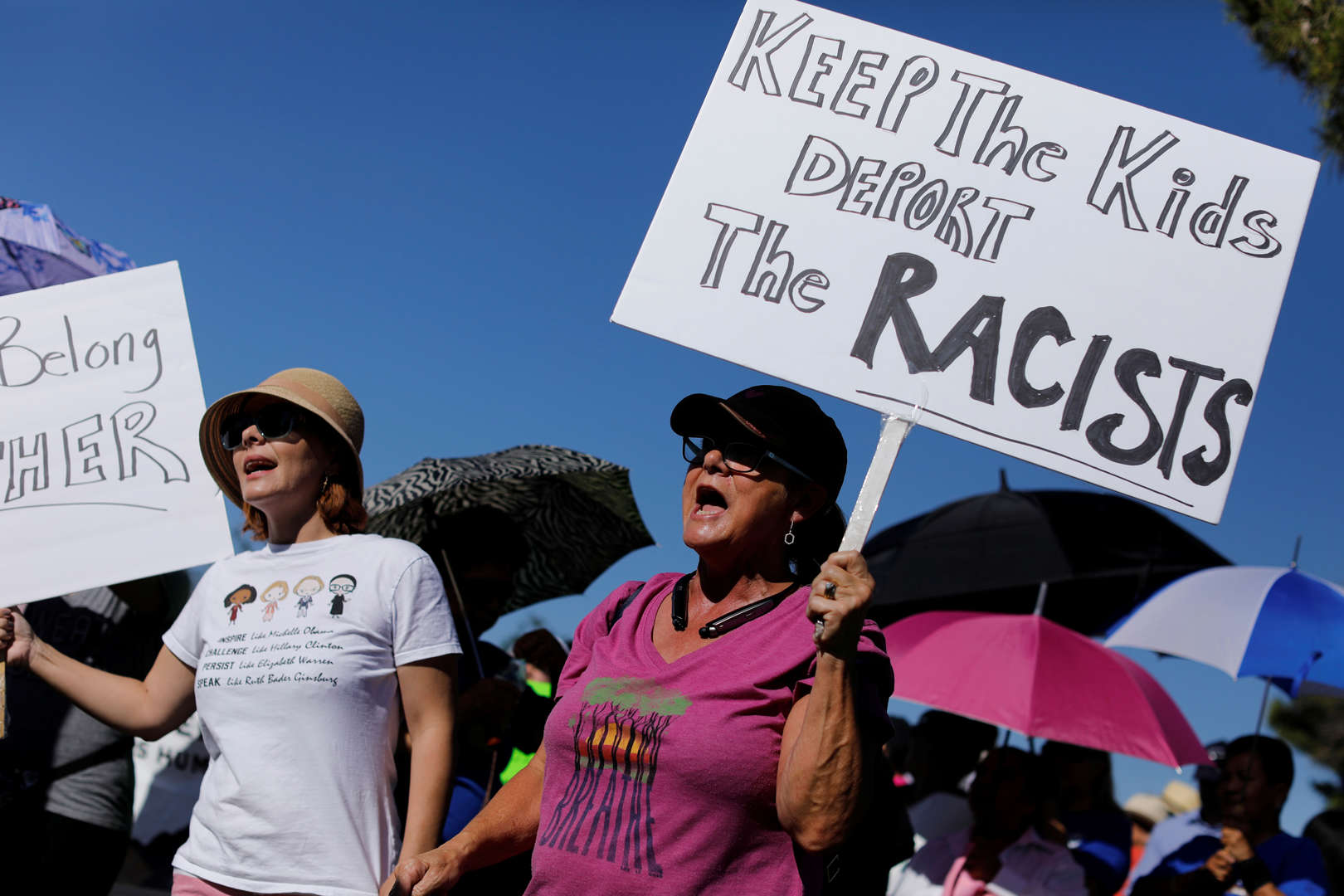 permalink   ·  vote tally
Top
+2
-0
MCD, you really need to quit being so cheap, either get a smart phone or an internet connection at your apartment. By the time you post your TRUMP hatred links it's old news. He sighned an executive order to keep families together.
permalink   ·  vote tally
Top
+0
-7
supporter
He signed an executive order that requires children to be incarcerated with their parents indefinitely, which is objectively better, but still bad, and more importantly, runs afoul of Reno v. Flores which requires asylum-seeking minors to be released after no more than 20 days.
permalink   ·  vote tally
Top
+5
-0
As usual, Snowy, criticizes me instead of Trump's inhumane policies, which I can only assume he agrees with. Please correct me if I'm wrong, Snowy! And, Snowy, please do enumerate all the ways Trump is making America great! I'd really love to know the details.

In the meantime, here's some math to consider:

And, that doesn't include the cost of re-uniting the children (many of whom are babies) with their parents, many of whom have already been deported. How much is that going to cost -- I'm thinking quite a bit -- and wonder if the job can even be accomplished -- within 20 days as required by law -- or ever.

https://www.nbcnews.com/s...ds-n884871
permalink
Top
+0
-0
ACCCCHUM. Maybe just apply for a Visa I believe it's the law MCD. Your Trump hating regurgitation of CNN gets old.
permalink   ·  vote tally
Top
+0
-4
supporter
This morning NPR recounted all the lies Trump and his cabinet of swamp dwellers told in the last few days, which by signing the Executive Order tacitly proved they were all lies. It was a nice piece of work. 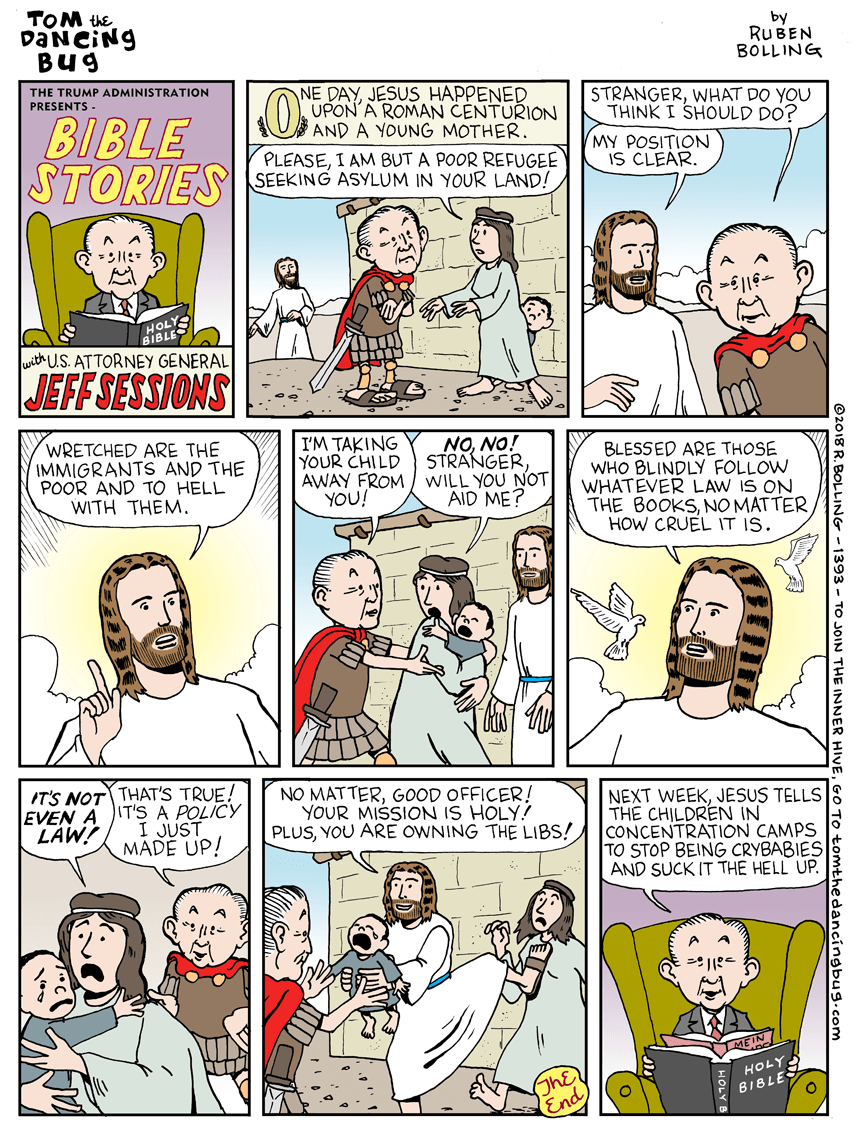 The man from snowy plains wrote:
I REALLY DON'T CARE DO U

Of course you don't care, you are a racist POS.

The rest of us were raised as God-fearing Christians. That's the kind of town I remember Miles City was, in my youth.

Has it really been taken over by atheists like Snowy?
permalink   ·  vote tally
Top
+4
-0
supporter
You do not have to be a God-fearing Christian to care about fellow man or woman or have a moral compass that is not mean spirited or racist. In fact, I’m afraid that a great number of the so-called God-fearing Christians are just righteous a-holes. Take a look at the Trumplicans.
permalink   ·  vote tally
Top
+4
-1


The rest of us were raised as God-fearing Christians. That's the kind of town I remember Miles City was, in my youth.

Has it really been taken over by atheists like Snowy?

Now THAT is funny.

There hasn't been a real "God-fearing Christian" on milescity.com ever since Richard flipped.

Has this Trump derangement syndrome really driven all of you to abandon your core beliefs? 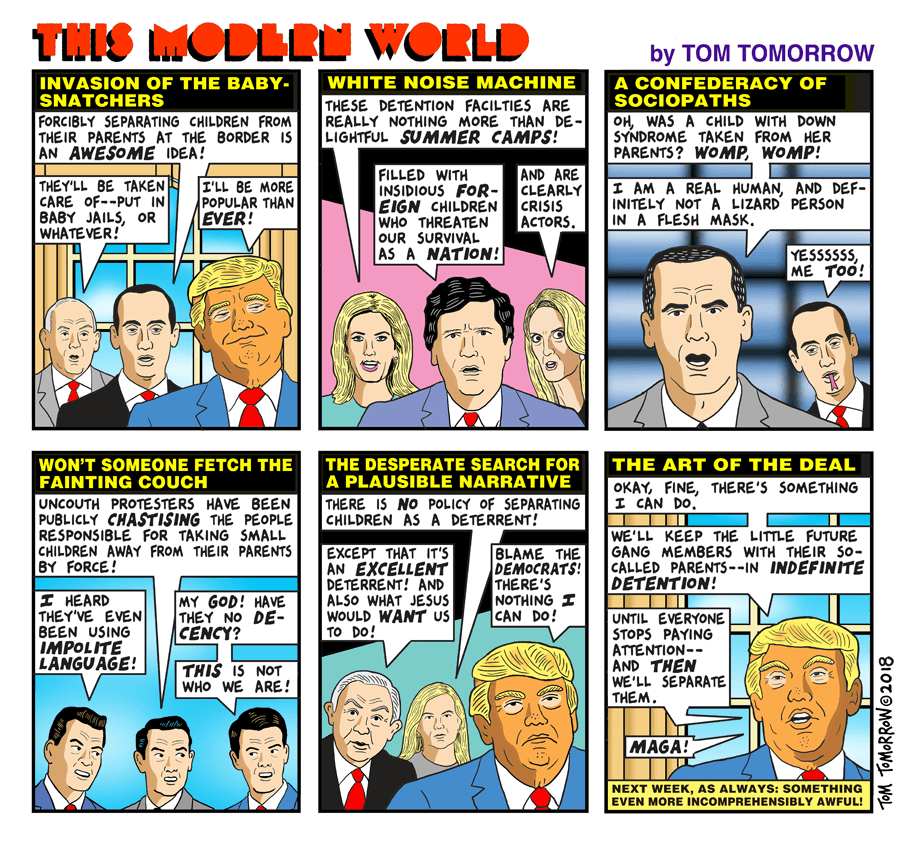 permalink   ·  vote tally
Top
+1
-0
The GREAT BLOWHARD GUNNAR has spoken...Archie and Jughead will be disappointed
permalink
Top
+0
-0
supporter
Curious to know how your parents raised you, Snowy. Obviously agnostic or atheist, but I am not sure? Islam?

It's not to late to seek out a Bible and read the New Testament. Lots of good stuff in it, "Love thy Neighbor", "Do unto others. ...", etc.

Maybe you and Obbjob could form an online study group? If you do, I caution you not to invite Jeff Sessions to lead it.
permalink
Top
+0
-0
Supreme Court Rules on Trump side. USA is IN GOD WE TRUST not Allah. OBAMA era is OVER. Choke on that one Gunnar.
permalink   ·  vote tally
Top
+0
-3
supporter
Wait....what? I thought the travel ban had nothing to do with religion and was all about national security. What does Allah have to do with this?
permalink   ·  vote tally
Top
+3
-0
SPONSORED
Here's the most recent news about "family values" as defined by the Trump Administration -- Trump wants to detain migrant children even longer.

"Trump Admin. Wants Ability to Hold Migrant Kids Indefinitely, Upending Decades-Old Ban: Since 1997, Authorities Have Been Barred from Holding Migrant Kids More than 20 Days, but a New Rule Would Change That" by Julia Ainsley, nbcnew.com, September 6, 2018 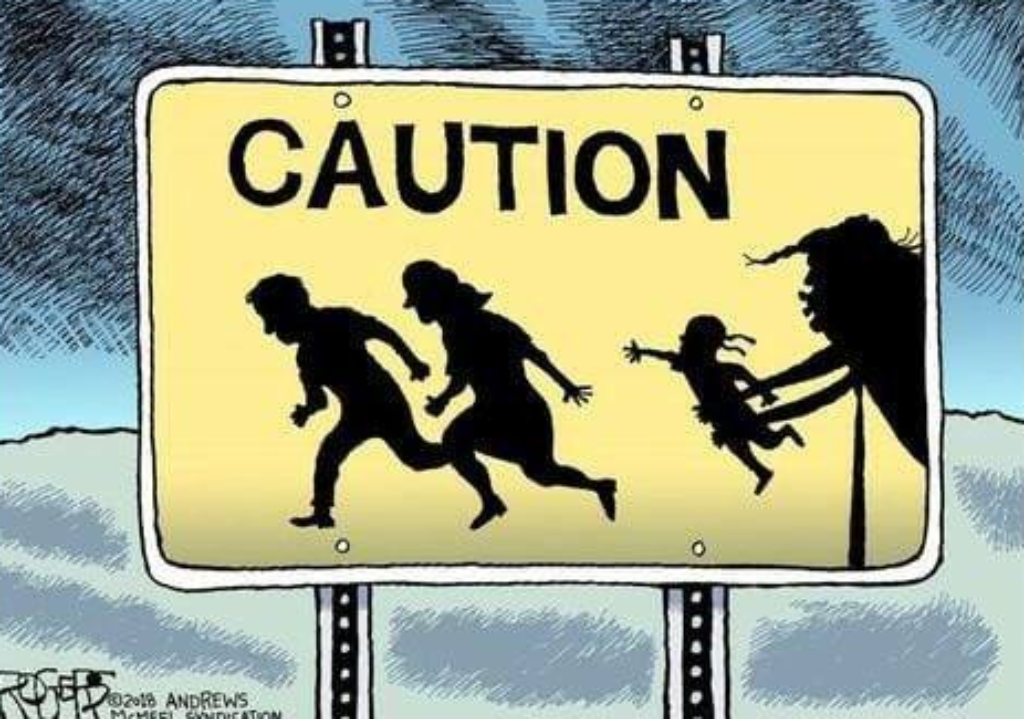