Today is the 20th anniversary of the "milescity.com" domain name being registered on May 1st, 1998 - thus founding the site.

Back then, a very early version was put online and updated for a while after - until it became apparent it wasn't good enough.

I pulled it offline, not sure if I would attempt anything else - until having a beer at a bar in Seattle (after a Mariners game with Dave and friends) when Bert Elwood convinced me to bring it back. We shook on it that night, and I proceeded to create this entire monstrosity from scratch. I even traveled from Redmond to Miles City to take the photo of Main Street that appears in the masthead above.

The resurrection came alive in late 1999. Since then, the site has remained pretty much the same - with features slowly being added over the years (from discussion forums, to the Like/Dislike buttons, the addition of advertisements, and everything else in between).

The site has been rewritten multiple times over the years, but only 2 major versions stuck - the original (re)creation from 1999, that was written in ASP w/ server-side Jscript, and the current, rewritten to ASP.NET MVC w/ server-side C# and some client-side JavaScript sprinkled around, and a whole bunch of other technologies added on top.

When I first created the site, I didn't really see more than five years in the future - so it's kind of amazing that now 20 years later we're still around.

Especially considering some of the costs I had to endure in the past and the number of platforms it has migrated across (from a dedicated Dell RAID5 server in my house connected to a 768K synchronous DSL line running IIS/SQL Server, to now everything being out in the Azure cloud, spread across half a dozen or more different services and servers).

So anyway, many thanks to everybody who has supported the site over the years. All of you are what keeps all of this going. And while newer technologies like Facebook have taken a bunch of our glory, I guess we're still not done yet!

permalink   ·  vote tally
Top
+13
-0
SPONSORED
moderator
founder
Thanks for all your hard work and keeping the site going, Larry.

permalink   ·  vote tally
Top
+3
-0
admin
moderator
founder
Also, many thanks to you Dave, for continuing to help moderate and administer the site - a thankless job that also helps keeps everything running.

permalink   ·  vote tally
Top
+3
-0
admin
moderator
founder
The oldest version of the site that archive.org has appears to be from November 9th, 2000. Their snapshot is incomplete, but gives an idea of what the original version looked like back then. 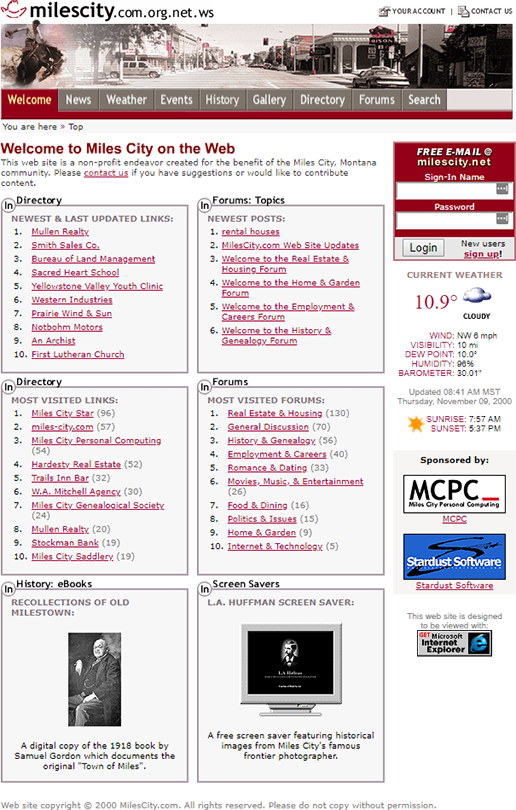 permalink
Top
+0
-0
supporter
Wow....to think we have to thank Bert Elwood for this.

Gunnar Emilsson wrote:
Wow....to think we have to thank Bert Elwood for this.

No, the more shocking thing is that we actually got Bert to go to a baseball game!!!

permalink   ·  vote tally
Top
+2
-0
moderator
founder
I think Bert, Gunnar, and I went to a Mariners game one time when Gunnar was in town. Gunnar, do you recall that?
permalink
Top
+0
-0
supporter
I do recall that. I recall much sniveling over the price of microbrews at the stadium.

Nowadays, the cost of microbrews doesn't seem to matter as much....

permalink   ·  vote tally
Top
+1
-0
SPONSORED
founder
supporter
Gad, has it been THAT long. I guess it has. Feeling old. . . Since I turned 60 this year, I have been feeling OLD all year. Thanks! I remember the scanner I got for posting a bunch. Still like it better than buttmagazine.
permalink
Top
+0
-0
Post new topic Reply to topic
Trump Dictated Letter About His Health
Russian Lawyer Admits to Being Russian Agent