"A new PRRI survey finds white evangelical support for President Trump at an all-time high, with 75 percent holding a favorable view of the president and just 22 percent holding an unfavorable view. This level of support is far above support in the general population, where Trump’s favorability is at 42 percent.

https://www.prri.org/spot...time-high/
permalink   ·  vote tally
Top
+1
-0
Mr. Aslan's analysis in the video posted above only explains one aspect of Trump's appeal to the white evangelicals -- the money angle. He doesn't talk about the racism and sexism that Trump exhibits and brings out in his followers. Let's not forget that back in the 1960s when Martin Luther King Jr. was non-violently marching against racism and segregation in the American South -- all those white Southerners resisting Dr. King's message were going to church every Sunday.

I think there is more to Trump's appeal to the white evangelicals than the money angle.

I recently read NBC reporter, Katy Tur's book on the 2016 presidential campaign entitled: "Unbelievable: My Front-Row Seat to the Craziest Campaign in American History." Katy Tur was the NBC reporter assigned to cover the Trump campaign starting in 2015 in the long lead up to the November 2016 election.

"The thing is, they don’t look like cruel people. They look like they’re in their forties. They’re wearing designed jeans and nice boots. They seem healthy and comfortable, and it’s hard to imagine them acting in this way at home or in the office. Hillary Clinton recently called Trump’s supporters a 'basket of deplorables,' and while some might be easy to single out like that, most aren’t. A lot are your coworkers and your neighbors. They’re your taxi driver, your fireman, and your supermarket cashier. They’re the mom in riding boots and a Barbour coat helping her cute daughter with her school science project. You would never know that they’re Trump supporters, quote unquote deplorables.

But inside a Trump rally, these people are unchained. They can drop their everyday niceties. They can yell and scream and say the things they’d never say out loud on the outside.

“Hillary Clinton is a c_nt!”

“Immigrants need to get the hell out!”

On the outside, this kind of behavior is disreputable. But inside a Trump rally, they can tell a woman she’s ugly and needs more makeup. They aren’t deplorables. They are patriots. And now they’re waiting to see their hero for the first time after a three-day fight for his political life. They’re ready for him. I spot a new T-shirt in the crowd: SHE’S A C*NT, VOTE TRUMP. The guy is with his wife and three kids. “

But, you know, the scariest part of watching that video is that you, David, MCD and Gunnar, actually believe it.

Fun fact: If the "white" evangelicals carried Trumps election, they will carry his re-election. It isn't that they are in love with Trump. It's that they hate where the Progressives are trying to drag the Country.

No amount of testimonials from hookers will make the Democrats look any better.
permalink   ·  vote tally
Top
+0
-5
moderator
founder
"Oddjob", always nice to see you come out from the shadows where you lurk and grace us with your wisdom.

I'm pretty sure I didn't offer any opinion one way or the other about what Aslan said. I do find it interesting, though, that he managed to get you so triggered. He must have struck a nerve with you.
permalink   ·  vote tally
Top
+1
-0
supporter
I know a LOT of white evangelicals, and over a certain age... they're racist as procreate.
permalink   ·  vote tally
Top
+4
-0
supporter 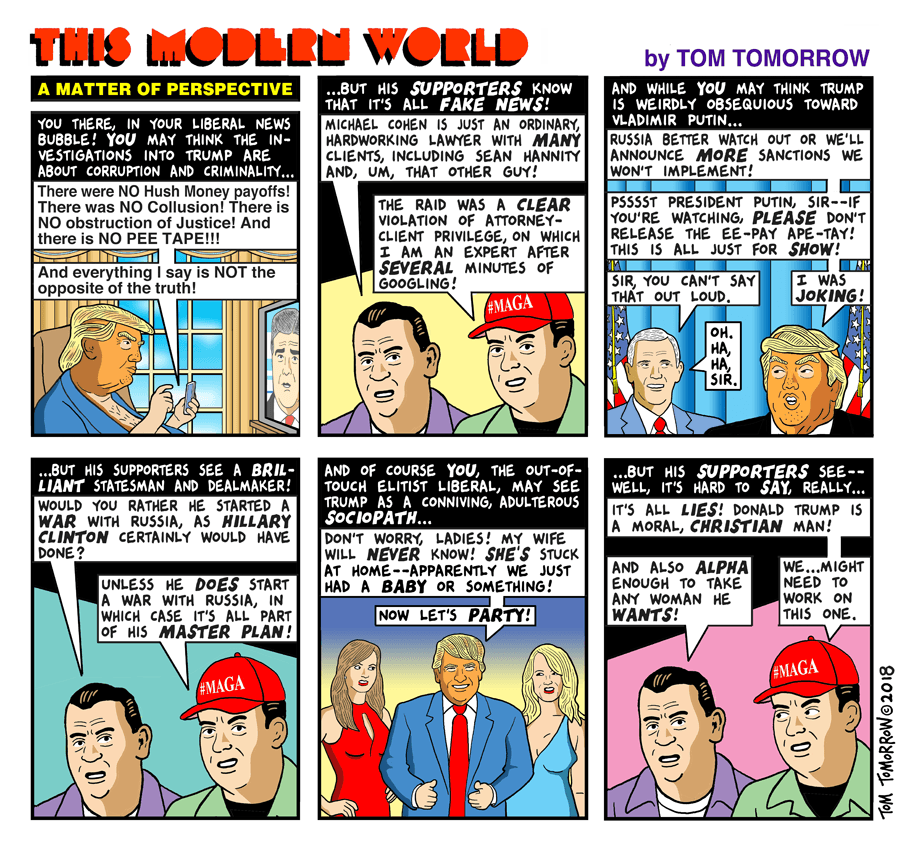 Oddjob wrote:
....... It's that they hate where the Progressives are trying to drag the Country.

Oddjob is deathly afraid of the passage of the Equal Rights Amendment.

permalink
Top
+0
-0
supporter
Saw "Aslan" mentioned here and thought this thread might be about "The Lion, The Witch, and the Wardrobe" by C.S. Lewis, which is one of my favorite books of all time....DANG, I'm disappointed.
permalink
Top
+0
-0
Oddy, Snowy. Aslan is SPOT ON here and you know it.
permalink   ·  vote tally
Top
+1
-0

David Schott wrote:
"Oddjob", always nice to see you come out from the shadows where you lurk and grace us with your wisdom.

I'm pretty sure I didn't offer any opinion one way or the other about what Aslan said. I do find it interesting, though, that he managed to get you so triggered. He must have struck a nerve with you.

C'mon David. You know you always state your position by what you post here on milescity.com. If you post from a bigot, then you are a bigot. Sometimes all you need to do is respond to bigotry to be a bigot. If you don't believe that, just read through this thread again.

[Edited by Oddjob (5/6/2018 9:06:03 AM)]
permalink
Top
+0
-0
supporter
You read WAY too much conspiracy into posts here, Oddjob. But I guess that is the signature of your kind. Paranoia, big destroyer.
permalink
Top
+0
-0
SPONSORED
@oddjob Trump's supporters are a minority. He lost the popular vote and has consistently remained at about 35% approval rating. The majority of the people don't like him, his administration, or their policies. The evangelical leaders who have given Trump their support are the rump end of southern racism. This is about power pure and simple. Falwell and the gang all see themselves as the American Ayatollah.
permalink   ·  vote tally
Top
+1
-0
Post new topic Reply to topic
Traffic fatality around Forsyth
Correspondence From Crackpots