Here is some other advice Trump ignored:

"Trump also chose not to heed talking points from aides instructing him to condemn the recent poisoning of a former Russian spy in Britain with a powerful nerve agent, a case that both the British and U.S. governments have blamed on Moscow."

Here is what Senator John McCain had to say about the matter:

“An American president does not lead the Free World by congratulating dictators on winning sham elections. And by doing so with Vladimir Putin, President Trump insulted every Russian citizen who was denied the right to vote in a free and fair election.”

Finally, it should be remembered that Putin's opposition opponent, Alexi Navalny, suffered two attacks last year in which a green chemical was doused on him. (See, photo below.)

"Trump’s National Security Advisers Warned Him Not to Congratulate Putin. He Did It Anyway" by Carol D. Leonnig, David Nakamura and Josh Dawsey Washington Post, March 21, 2018

Photo of Russian opposition leader, Alexi Navalny, after being doused with a green chemical: 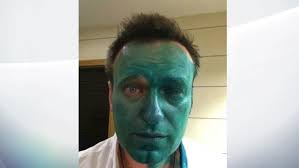 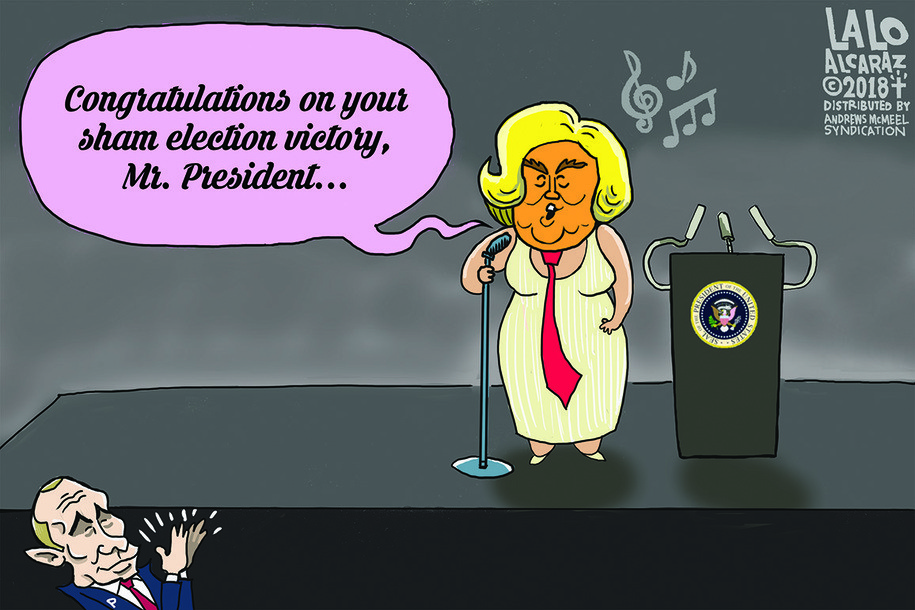 permalink   ·  vote tally
Top
+3
-0
supporter
Yes, snowy, President Obama did congratulate Putin. When the election wasn't an obvious sham, before Russia's interference in the Ukrainian election and military intervention there, before the annexation of Crimea, before military action in Syria, before a nerve agent attack on a British citizen, before interference in our election. When there was still an opportunity for normal relations with Russia.

They are not the same thing. The whataboutism from Trump supporters is getting old.
permalink   ·  vote tally
Top
+4
-1
A few more things, Snowy!

President Obama's campaign strategist never paid millions to a data collection frim like Cambridge Analytica (on whose board Steve Bannon was for years) before he joined the Trump campaign) to gather the personal information of 50 million American--data that is now in the hands of Putin's government in Russia.

And, President Obama was never under investigation by a Special Prosecutor for collusion with the Russians in a presidential campaign.

And, President Obama was never filmed in a Moscow hotel room with a couple of prostitutes doing a golden shower.

President Obama could give Putin a congratulatory phone call, without people wondering if he was in cahoots with Putin to undermine our democracy. And, Trump cannot! It's that simple.

Snowy, you may also want to read this new article about the Russian hacker:

"Guccifer 2.0, the “lone hacker” who took credit for providing WikiLeaks with stolen emails from the Democratic National Committee, was in fact an officer of Russia’s military intelligence directorate (GRU), The Daily Beast has learned. It’s an attribution that resulted from a fleeting but critical slip-up in GRU tradecraft.

That forensic determination has substantial implications for the criminal probe into potential collusion between President Donald Trump and Russia. The Daily Beast has learned that the special counsel in that investigation, Robert Mueller, has taken over the probe into Guccifer and brought the FBI agents who worked to track the persona onto his team.

Snowy, your hero (but not definitely not mine) Donald Trump should be in jail -- and I suspect he will eventually be convicted of treason!

permalink
Top
+0
-0
Ya know MCD OBAMA had his back door agenda too pass the Baton on to SHE DEVIL CLINTON, Had the DEMS put up any one with reasonable credentials TRUMP would have never won. BLAME YOUR CHOICE and get over it.
permalink
Top
+0
-0
supporter
Blah blah blah Obama

I repeat my earlier question which you chose to ignore.