He once claimed it was a conspiracy concocted by the Chinese to hurt American businesses.

It was a record-breaking hot summer -

followed by a record-breaking cold winter.


For those who are science illiterate:

THAT IS LITERALLY WHAT THE TERM "GLOBAL WARMING" MEANS.
permalink
Top
+0
-0
SPONSORED
admin
moderator
founder
Trump thinks climate change isn't real because it's cold out. This map proves him wrong.

It’s freaking cold out there, America. But you don’t need a Vox explainer to know that. You knew it the second you woke up. Knew it in that dreadful moment just before peeling off the blankets, when you thought, This is the warmest and most comfortable I’ll feel all day.

The East Coast is in the teens and 20s. Temperatures in the Midwest are hovering near zero Fahrenheit. The brave, brave residents of International Falls, Minnesota, had to face negative 36 degrees (!!) on Wednesday morning. At that temperature, some preparations of automotive antifreeze will freeze. Record-breaking lake effect snows are blanketing Great Lake shores.

And the forecast is grim. Temperatures are expected to continue to drop through the start of the new year. The national average is expected to be around 10 degrees New Year’s morning, the Washington Post reports, “with about a third of locations below zero.”

But this forecast is not, however, evidence against climate change. Yet the President of the United States, who has tweeted his skepticism about global warming 115 times in the past, could not help himself last night:

Yes, it can be weirdly cold in the United States, but, still, globally, much warmer than average because of climate change. Remember, weather and climate are two different things. Weather is what we’re experiencing in the moment. Climate is the broader trends that make certain weather experiences more or less likely. 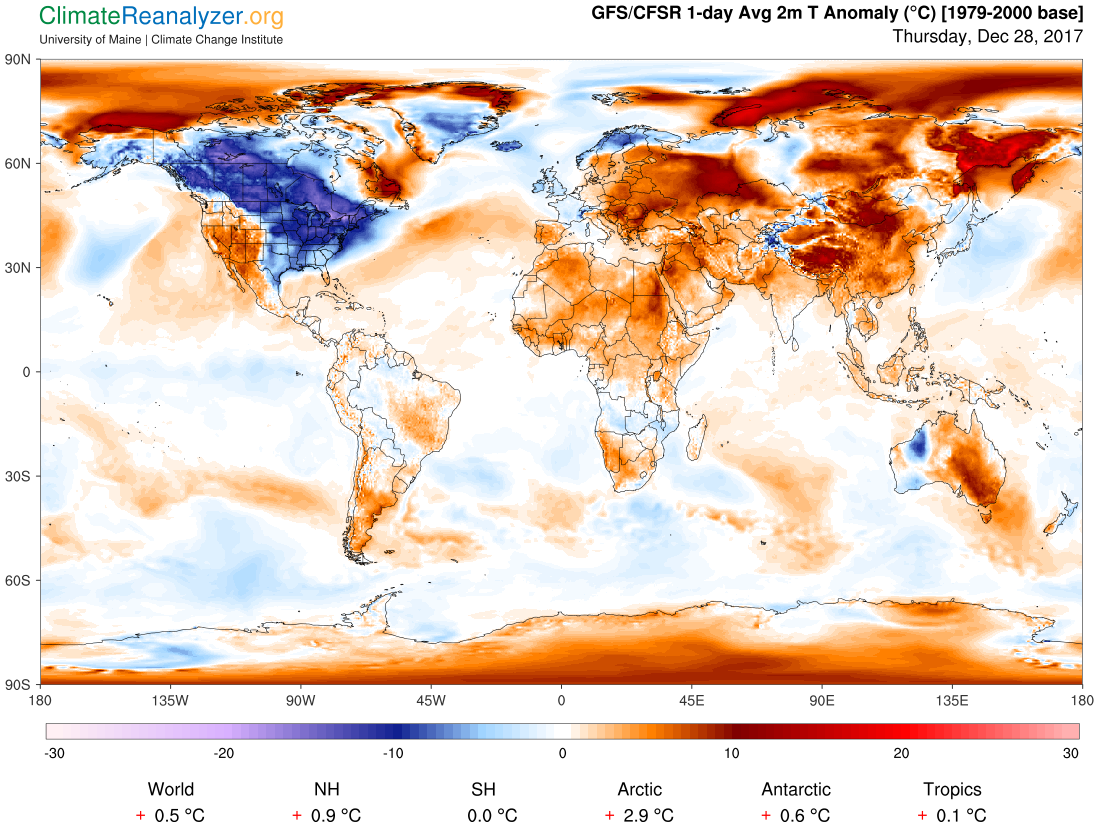 It shows daily temperature anomaly — or, how weirdly different global temperatures were compared to a baseline from 1979 to 2000 — around the whole world. Overall, the world on December 28 was .5-degrees Celsius warmer on average, compared to the baseline. That’s true despite the fact parts of North America are 10-plus degrees below average.

North America is the most unusually cold place in the world right now. (Not all of it, though — Northern Alaska and Canada and the Southwest are all much warmer than usual.)

And rest assured, 2017 is still on track to be one of the warmest years on record.

https://www.vox.com/scien...jet-stream
permalink   ·  vote tally
Top
+2
-0
You are preaching to the choir. Trump and his supporters are either too stupid to understand the difference between weather and climate or refuse to even discuss anything, especially scientific, that does not suit their political agenda.
permalink   ·  vote tally
Top
+1
-0
supporter
"I live on the Snowy Plains and it's all fake news because it comes from the east coast liberal media and not Fox News and der der der I love coal and der der der der der der der"
permalink
Top
+0
-0
Post new topic Reply to topic
25 Worst Passwords of 2017
Developmentally Disabled Impacted by Budget Cuts