Then, Trump's handlers (and many other politicians and citizens of, both the U.S. and the world, including Germany), realized that Trump didn't have enough of a moral compass to realize that "many sides" were not at fault -- just the white nationalists, also known as neo-nazis. Even Angelia Merkel of Germany spoke out.

So, finally today, Trump said what he should have said all along -- although I suspect his remarks were written by someone else. However, Trump being Trump also had to get a Twitter shot into Kenneth Frazier, the Merck executive who resigned in protest from Trump's American Council on Manufacturing.

Here's what I want: A president who can make America proud again. We all deserve much, much, much better. Oh yes, and for the record, Trump still has not criticized Putin. Wake up, America!

Please tell me what Obama did with the riots of Black Lives Matter. Not diddly squat
permalink   ·  vote tally
Top
+1
-5
supporter
The man from snowy plains isn't an idiot like the current crop of neo-nazi pondscum - he knows that his neighbors/employer probably would shun him like a case of third-stage syphilis. He'd be right, because they're right.

At least Danny K. Allen was proud of his white supremacy.

Coward.
permalink   ·  vote tally
Top
+2
-0
Oh give it a REST. My Great Grandmother maiden name was Ortez. My comments about Obama are his political agenda, Nothing less.
permalink   ·  vote tally
Top
+1
-1
Here are some images from last weekend's demonstration in Charlottesville, Virginia where one 32 year old woman was killed and 19 people were injured when a white supremacist drove his car into the people gathered. 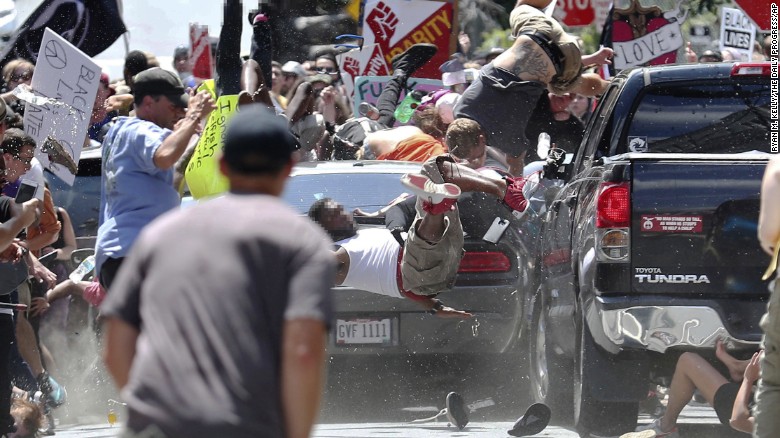 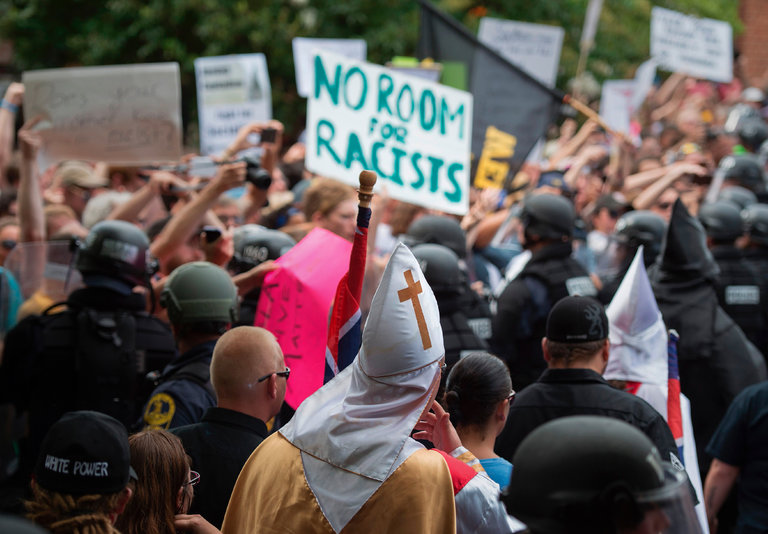 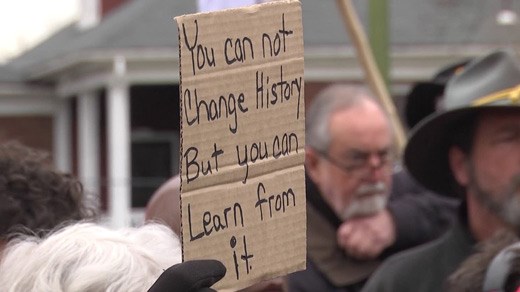 Walmart, the nation’s largest private employer, has a work force of 1.5 million people and a racially, geographically and politically diverse group of customers.

This was a planned and permitted march of free speech. It comes no where close to the OBAMA riots of BLACK LIVES MATTERS...

WAKE UP AND GET A REAL JOB!

https://www.nytimes.com/2...train.html
permalink
Top
+0
-0
It gets even worse! Trump is now defending his initial remarks about Charlottesville and is, again, blaming both sides!

Here's what Speaker of the House, Paul Ryan had to say about Trump's latest remarks:

“White supremacy is repulsive,” wrote Speaker Paul D. Ryan, Republican of Wisconsin. “This bigotry is counter to all this country stands for. There can be no moral ambiguity.”

Both sides? What? Only one side -- the white suprematists, also known as neo-nazis, killed and injured people in Charlottesville, Virginia last weekend.
permalink
Top
+0
-0
Remember Richard Spencer, the alt-right, neo-nazi who planned to hold an armed, white suprematist march in Whitefish, Montana last January. Well, the same Richard Spencer was also one of the planners, attended, and was scheduled to speak at, last Saturday's "Unite the Right" demonstration in Charlottesville, Virginia. Richard Spencer is currently being sued by the Southern Poverty Law Center for unleashing a hate storm against a Jewish woman in Whitefish.

permalink
Top
+0
-0
Stephen Colbert: Take A Side, Mr. President: Nazis Or Not Nazis

permalink
Top
+0
-0
supporter
Former President Barack Obama's response to the deadly car attack and violent protests during a white nationalist rally in Charlottesville, Virginia, Saturday is now the most-liked tweet of all time.

Obama was a million times better president than Trump could ever hope to be.
permalink   ·  vote tally
Top
+5
-2
supporter 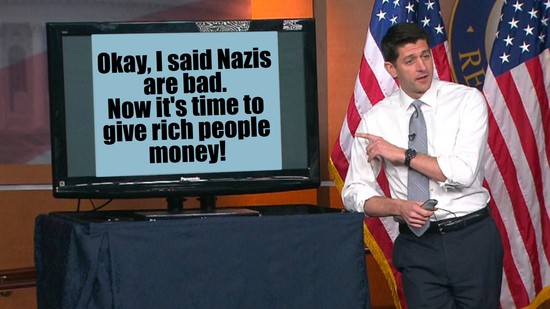 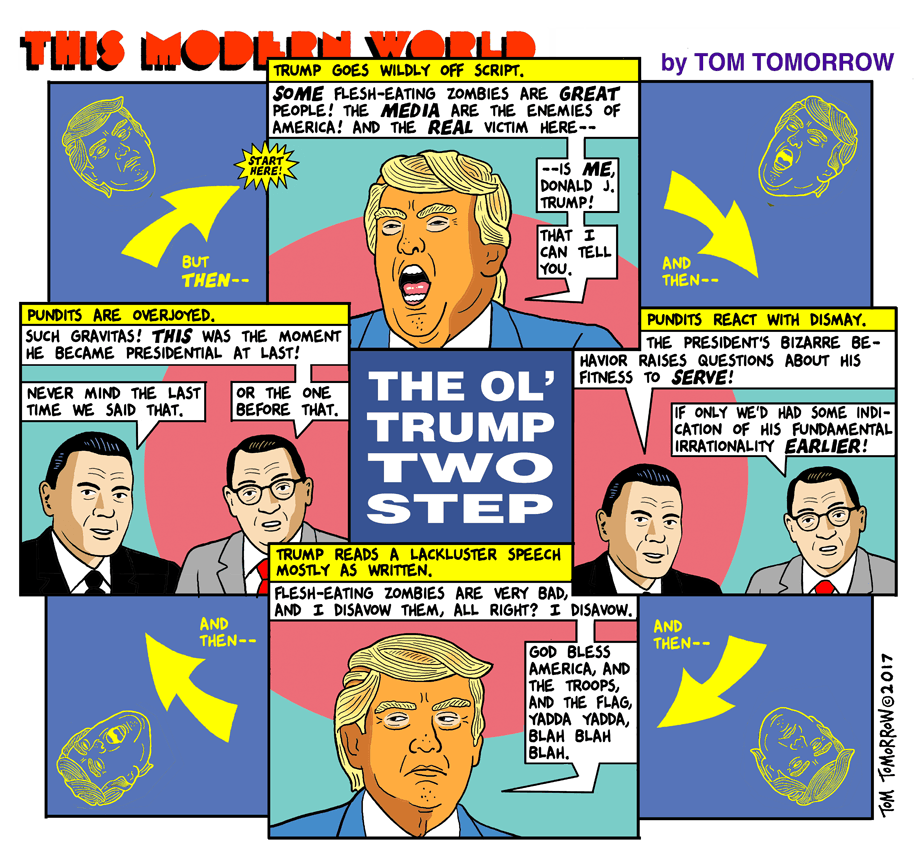 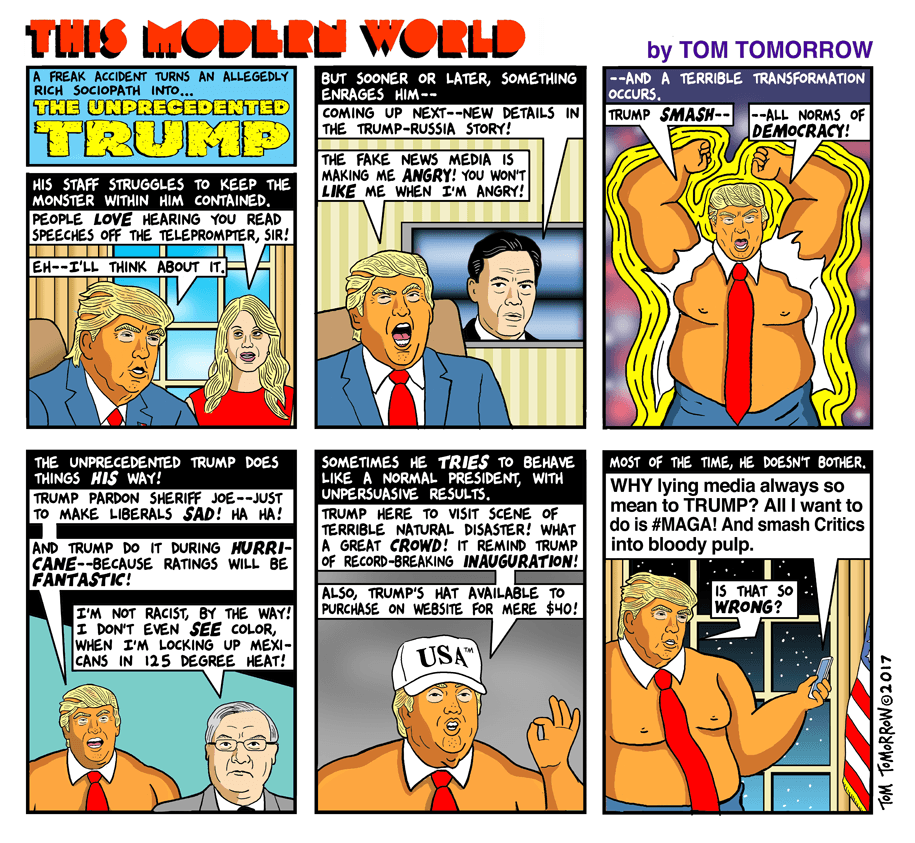 I have to admit, having a whack job in the White House is pretty funny stuff.
permalink   ·  vote tally
Top
+3
-1
Yesterday, September 12, 2017, "the House and Senate have unanimously passed a joint resolution urging President Trump to denounce racist and anti-Semitic hate groups, sending a blunt message of dissatisfaction with the president’s initial, equivocal response to the white nationalist violence in Charlottesville, Va., last month. . . .

"The nonbinding measure specifically singles out for condemnation 'White nationalists, White supremacists, the Ku Klux Klan, neo-Nazis, and other hate groups.' That represents a sharp contrast to the president’s first comments after the deadly early August demonstrations in which he assigned equivalent blame for the violence on anti-fascist counter-protesters."

And, as usual, Tom Toles does a great job of explaining things. The man from snowy plains wrote:
Oh and the ANTIFI were just flower children from the hippy era..keep believing it was one sided MCD.

Me read Fox News. Me know!
permalink   ·  vote tally
Top
+1
-0
What Gunner, No names or LABELS. Disappointed!
permalink
Top
+0
-0
Who fondly remembers the days of Huntley Brinkley when they just reported the news.
permalink   ·  vote tally
Top
+1
-0
supporter
So how about all the black lives matter movment going on in ST Louis right now. Those look pretty violent to me and yet nobody wants to say anything because their black, but yet carry on about the whites. Makes no sense to me
permalink
Top
+0
-0
supporter
That's probably because you're ignorant on the particulars of what sparked the unrest in St. Louis.

The other option is that you AREN'T ignorant, and you just can't/won't empathize, but I'm going to give you the benefit of the doubt on this one.

Now, did you see the video of the nice white nurse getting manhandled by the terrible authoritarian police office down in Salt Lake? I bet you did, and I bet it pissed a cubby off.

And, to return to the first example, what if there was a whole series of stories and videos where pretty white nurses got thrown in the motherprocreateing clink because they wouldn't break the law on any random deputy dog's say-so - and every time it went to trial, the judge or the jury would let the nice policeman walk? Like, even if the nurse was shot in the back while running away (sorry, misremembered the facts in this particular case - no gun planting, and a hung jury, not acquittal) Would that get under your skin a bit? Might make you feel like taking a walk in the streets with a couple thousand other cubbies? Maybe vent a little of that anger?

Probably not. Ignorance is bliss.

[Edited by Bridgier (9/21/2017 8:30:55 AM)]
permalink   ·  vote tally
Top
+1
-0
Another BS argument against the Black Lives Matter movement is the idea that the slogan itself excludes all other racial groups as having lives that matter. Of course it is to anyone's advantage who opposes BLM to interpret the title as exclusive. Especially those who are racist. I have never felt the title "Black Lives Matter" is meant to insinuate that my life, the lives of may family and friends and anyone else who is not black do not matter. You can bet the average Trump supporter feels otherwise.
permalink   ·  vote tally
Top
+1
-0
supporter
Bridger, I don't even read your posts. All you do is belittle people to make yourself feel better I get it, your smarter then me and for that I really don't care. If you people can't see what is happening in the bigger cities with all the rioting and looting then you people are the closed minded ones that have your horse blinders on and refuse to see the truth.
permalink
Top
+0
-0
It seems we have moved from discussing neo-Nazis on this thread to Black Lives Matter.

So, in order to gain some understanding about why Black people are upset, you may want to watch the videos of police shootings compiled by reporters at the New York Times, "The Raw Videos That Have Sparked Outrage Over Police Treatment of Blacks" by Mercy Benzaquen, Damien Cave and Rochelle Oliver, Updated August 19, 2017.

The videos can be found at:

https://mappingpoliceviolence.org/
permalink
Top
+0
-0
supporter
Well, I gave you the benefit of the doubt, what more did you want? A pat on the head and a shiny new participation ribbon because you where born white?

Pffft.
permalink
Top
+0
-0
supporter
MCD, check out some stats on how many colored people are arrested vs whites. If you don't break the law the law will have nothing to do with you. Pretty easy concept for most. Even if I was mad as a hornets nest, it still would not drive me to the point of destroying what others have worked so hard to EARN. Most of these blacks that are rioting and looting most likely have no idea of what it's about besides they getting some new snickers for free!!
permalink   ·  vote tally
Top
+0
-3
supporter
Thank GOD cubby didn't fat-shame any colored people in that last comment.
permalink
Top
+0
-0
Hey, How about some stats on Cops killed on and off duty. WTP ;^) Mr B new found WORD is ignorance, typical of the radical liberalism. We should expect more of our fellow Americans.
permalink
Top
+0
-0
SPONSORED
Far more news worthy is perhaps OBAMA speech with Bill Gates, The man can SPEAK. Don't care for his dirt politics. Or how about Supreme Justice Ruth Ginsburg speaking. Makes a person humble that a conservative got on the bench. One thing stands out in her times is how far women fair treatment is far better. The one thing we all have in common is a Mom,sister or daughter.
Wake Up America...GET OFF THE BASH WAGON...CHEERS
permalink
Top
+0
-0
Post new topic Reply to topic
Trump Russia Investigation Update
Puns & Shaggy Dog Stories - 2009