A tomahawk cruise missile costs roughly $1 million. We just spent $59 million dollars bombing an airbase in Syria. The landing strip will be rebuilt soon and Russia will probably sell more bombers to Assad to replace the ones destroyed yesterday. The chemicals weapons were not destroyed. And, the tyrant Assad is still being aided by the tyrant, Putin.

Yes, it is terrible that Syrian people, including children and babies died this week in the gas attack. Tragic. Horrible. A violation of international law. But what did this cruise missile attack really accomplish? We can’t fight Assad in Syria unless we are willing to go to war against his ally, Russia -- Putin’s Russia. Is Trump going to risk going to war with Russia? Is that where we are here? Is that the signal Trump intended to send? Are we willing to go to war with Russia over Syria?

I read that the Russian Prime Minister (and Putin’s closed political friend), Dmitry Medvedev, complained today (04-07-17) that the U.S. cruise missile strikes on a Syrian airbase were one step away from clashing with the Russian military. I’ve heard it reported that the U.S. warned the Russians of the impending strike to ward off any Russian casualties. Good! World War III was averted. So far.

So, what was this strike about really? Was it a $59 million saber rattling event, or is President Trump willing to go to war with Russia over Syria? Or, was it a $59 million cruise missile strike intended to divert attention from the ongoing FBI and Congressional investigation about Russian interference in the 2016 presidential election? Did it help any of the Syrian men, women and children who were killed this week? The gas is still there. What was accomplished? Oh yes, and is Trump now changing his tune on Syrian refugees which so far number 5 million? Maybe he now finally understands that refugees are not terrorists. Finally, who is the winner here? It certainly is not the refugees, the people killed this week or the 250,000 to 300,000 Syrians already killed by and fighting against Assad’s tyrannical regime.

I’m thinking that the winner so far may be Putin. Remember Russia’s ultimate goal is to create chaos. Worldwide. And, so far they are doing an adequate job.

Read what one of Putin’s tank commander said in a recent New Yorker article about the new cold war with Russia; I think it explains Russia's overall strategy anywhere to get back militarily to the glory days of the old Soviet Union:

“Gerasimov is sixty-one years old, and is always photographed in a stiff, forest-green military uniform and with a perpetually sagging frown. He trained as a tank commander, and then climbed the military hierarchy; he led the Fifty-eighth Army during the Second Chechen War. In the article for Military-Industrial Courier[/i], Gerasimov suggested that, [i]in the future, wars will be fought with a four-to-one ratio of nonmilitary to military measures. The former, he wrote, should include efforts to shape the political and social landscape of the adversary through subversion, espionage, propaganda, and cyberattacks. His essay, written in the shadow of the Arab Spring, cited the anarchy and violence that erupted in Libya and Syria as proof that, when faced with the combination of pressure and interference, a ‘perfectly thriving state can, in a matter of months, and even days, be transformed into an arena of fierce armed conflict, become a victim of foreign intervention, and sink into a web of chaos, humanitarian catastrophe, and civil war.’”

I’ve been concerned for months that Putin is trying to cause chaos (economic, political, social) in the United States by whatever means necessary. I’m concerned that Trump may be playing right into Putin’s hands. After all, a $59 million Tomahawk cruise missile is quite a hit economically -- just for starters. We all have to hope this situation does not escalate.

"Putin condemned the attack as an act of 'aggression against a sovereign state' and suspended an agreement with the U.S. to avoid hostile incidents in the skies above Syria. Russian Foreign Minister Sergei Lavrov said he hoped what he called 'provocations' wouldn’t lead to 'irreversible results,' while the Defense Ministry in Moscow said it will strengthen Syria’s ability to protect itself. . . .

The sudden escalation has catapulted tensions between the world’s two largest nuclear-armed powers to the highest level since President Donald Trump took office in January. The Kremlin said the U.S. action will cause 'considerable damage' to ties between Moscow and Washington. . . .

The Russian Navy is sending a frigate armed with cruise missiles to its Syrian base in Tartus, Tass news service reported, citing a diplomatic official it didn’t identify.

'This is very risky,' said Andrei Kortunov, head of the Russian International Affairs Council, a Moscow-based research group set up by the Kremlin. 'This agreement helped to avoid direct military confrontation in this difficult situation. We don’t want to start World War III.'"

Well, nobody really wants to start World War III, we hope!! However, here's a little history. One of John Kennedy's main concerns during the Cuban Missile Crisis in October, 1962, was that either the U.S. or Russia would cause a world war and nuclear response by accident. Kennedy was extremely worried that some gun happy U.S. pilot or Russian pilot would defy orders and shoot down a plane or attack a Navy quarantine ship -- an accident that would be seen as an act of aggression which would precipitate a military escalation and possibly cause a nuclear response.

If you haven't seen the movie, "13 Days" I highly recommend that you see it ASAP. Maybe it's on Netflix. It's an accurate portrayal of the behind-the-scenes strategies that Kennedy employed to get us out of that diplomatic mess. We narrowly averted a nuclear confrontation with Russia then and, hopefully, we will be able to now. However, and unfortunately for us, Donald Trump has a very different temperament than John F. Kennedy who was extremely cool and smart when the stakes were as high as they can get back in October 1962.

By the way, in her book, The Guns of August, historian Barbara Tuchman details how World War I was started by accident back in 1917. It is my understanding that Kennedy had read that book and was quite aware of how world wars can be started by accident.

Wake Up, America!
permalink   ·  vote tally
Top
+0
-1
Here's another quote from the New Yorker article, "Trump, Putin and the New Cold War" by David Remnick, Evan Osnos and Joshua Yaffa. Yaffa is a New Yorker contributor based in Moscow. I post it because I think it explains Putin's overall strategy.

"For many national-security officials, the e-mail hacks were part of a larger, and deeply troubling, picture: Putin's desire to damage American confidence and to undermine the Western alliances -- diplomatic, financial, and military -- that have shaped the postwar [WW II] world.

Not long before leaving the White House, Benjamin Rhodes said that the Obama Administration was convinced that Putin had gone into an 'offensive mode beyond what he sees as his sphere of influence,' setting out to encourage the 'breakup' of the European Union, destabilize NATO, and unnerve the object of his keenest resentment -- the United States. Rhodes said, 'The new phase we're in is that the Russians have moved into an offensive posture that threatens the very international order.' Samantha Power offered a similar warning, shortly before leaving her post as United National Ambassador. Russia, she said, was 'taking steps that are weakening the rules-based order that we have benefited from for seven decades.'

For nearly two decades, U.S.-Russian relations have ranged between strained and miserable. Although the two countries have come to agreements on various issues, including trade and arms control, the general picture is grim. Many Russian and American policy experts no longer hesitate to use phrases like 'the second Cold War.' . . . .

Not in a generation has the enmity run this deep, according to Sergey Rogov, the academic director of the Institution for U.S. and Canadian Studies, in Moscow. 'I spent many years in the trenches of the first Cold War, and I don't want to die in the trenches of the second," Rogov said. 'We are back to 1983, and I don't enjoy being thirty-four years younger in this way. It's frightening.'"


Having lived through the first Cold War, I couldn't agree more. It is frightening. And, I don't think sending $59 million worth of Tomahawk cruise missiles to Syria did anything but make us $59 million more in debt -- weaker financially! We need a cohesive strategy, and I'm not sure the Trump Administration is up to the task. Yet, as an American citizen, and because so much is at stake, I would love to be wrong about this assessment! We shall all see, won't we. Stay tuned!

Putin and Assad have just raised the stakes in what appears to be a dangerous geopolitical game of chicken. However, it is not a game. It's a super serious matter and the stakes are very high! It is being reported that: "An air strike killed 18 civilians including five children in Syria's northwestern province of Idlib on Saturday, the Syrian Observatory for Human Rights monitor said.

It said the strike was believed to have been carried out by Russian planes, which operate in support of the Syrian government."

If you, like me, are worried about what's next, read this: 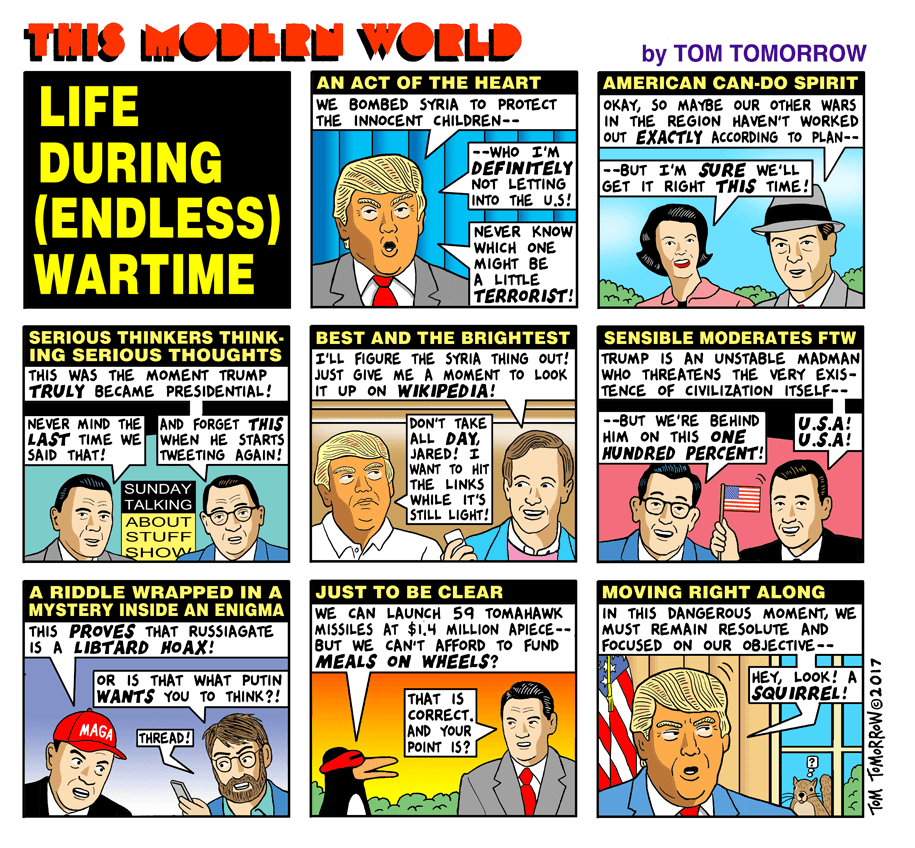 permalink   ·  vote tally
Top
+1
-0
Yes, as Tom Tomorrow notes in his cartoon, Meals on Wheels is threatened to be cut by the Trump Administration but Raytheon, the corporation that makes Tomahawk Cruise Missiles is going to do quite well. (Basically, guns win; but not food for the elderly, sick and poor!)

Another writer, Charles M. Blow puts it this way: "But, feeding the beast of war only amplifies its appetite. Market Watch reported last week, 'It could cost about $60 million to replace the cruise missiles that the U.S. military rained on Syrian targets Thursday night,' but Fortune reported that shares of weapons manufacturers, as soon as they began trading Friday, were 'collectively gaining nearly $5 billion in market value.'

War is a business, a lucrative one."

Secretary of State, Rex Tillerson, will be in Moscow meeting with Putin this week. I wonder how that will go?

https://www.nytimes.com/2...collection
permalink
Top
+0
-0
After a little research, it appears that Trump (or the Trump organization) owns stock in Raytheon, the maker of Tomahawk cruise missiles or, at least he did in May, 2016.

I guess Trump's thinking must be something like, hey, if I'm going to order a missile strike, why not own stock in the company who makes the missiles? Is this "the art of the [stock] deal" at work in the Trump administration's decisions on foreign policy?

But, but, wait, a minute! Isn't this a conflict of interest? And, isn't this against the emoluments clause in the U.S. Constitution? And, isn't Trump the kind of president our forefathers worried about and tried to prevent from happening? What is really going on here?

Here's a link to crib sheet list of Trump's conflicts of interest:

https://www.theatlantic.c...ts/508382/
permalink
Top
+0
-0
NBC News is reporting that Eric Trump (son of Donald; brother of Ivanka) is saying that one reason Trump fired off missiles at Syria was because Ivanka was upset. Say what???

Is this really be happening? Please tell me it's just a dream -- I mean nightmare! Please wake me up when it's over!