In March, I brewed four 10 gallon batches of beer. That's right, 40 gallons! Trying to make up for lost time, as I try to do most of my brewing early in the year, with little activity in the summer and the fall (fishing and hunting time).

New England IPA is the latest fad amongst American craft brewers. It is a cloudy, fruity IPA with low hop bitterness but a boatload of hop flavor and aroma. Here is my recipe, for anyone who might be interested:

To be split between WY1272 American Ale II and WY1318 London Ale III yeasts. Dry hopping will be two additions, 5 days each, 4 oz. per keg, a mix of Mosaic, El Dorado, and Equinox.
permalink   ·  vote tally
Top
+3
-0
SPONSORED
Every fall we have German hops that I put in the fire last year. Four big sacks full would know anyone that would want them. they pick
permalink
Top
+0
-0
founder
supporter
sponsor
Gunnar,

The New England IPA looks interesting. I may give (something like that) a try. Let us know how it turns out.

I’m going to brew this weekend. Eight gallons of something – the “something” will depend on what I have on hand to work with.
permalink
Top
+0
-0
supporter
Yes, I am looking forward to that IPA. It has just about finished fermenting, so I will probably rack it to kegs this weekend and start the dry hopping process.

Yesterday afternoon I decided to take off work and brew. I had a bunch of German smoked malt sitting around that I got a good deal on a couple of years go, that I need to use up. I made a smoked Baltic porter.

I kegged the Czech pilsner, and used the lager yeast cakes from it (and fermentors) for this porter.

A quick little history. Baltic porter is a style of rich dark porter brewed in the Baltic nations - Russia, Poland, Sweden, Finland, Lithuania, etc. It dates back to the heyday of the British empire. When Great Britain was a trading giant in the 1700 and 1800s, London porter was the most popular beer style in England. A stronger version was brewed and exported around the globe, resulting in Russian Imperial Stout, Caribbean Foreign Extra Stout, and Baltic porter. Because of the popularity of these styles, they started to be brewed in the countries that received the exports. In the Baltic countries, lager became the most popular style, so many Baltic porters began to be brewed with lager yeast instead of ale yeast. While London porter fell from popularity in Great Britain (and vanished around World War II, only to be revived again in the 1980s), porter remained popular oversees and was continually brewed in the Baltic nations (even those under the Iron Curtain). Carnegie Porter, which is brewed in Sweden, is one of my favorite beers.
permalink
Top
+0
-0
founder
supporter
sponsor
Gunnar,
What did you use for yeast in the Porter?
How long are you going to let it condition? Are you going to baby it along and shoot for something in the 10%ABV range?
permalink
Top
+0
-0
supporter
Hal, I am using this dried lager yeast, 34/70. I like it a lot.

I have a small chest freezer with a temperature controller hooked to it, that I can ferment the porter at 50°F. I will probably let it ferment for a month, may 6 weeks. After which, I will keg it, and age/lager the beer in my kegerator, which is set at 38°F. Not planning on tapping it until around Christmas time, so it will age for at least 6 months.

My tripel, on the other hand...that one, I am hoping it will end up around 9%.
permalink
Top
+0
-0
Since returning from Korea I have attempted two large batches. Both sucked. It's like I lost my touch while I was in the Land of the Morning Calm. First run was a Dales Pale Ale clone, then a Vienna lager that fell flat on its ass. I dropped a lot of dough on a Synergy 15 Gallon home brew system, and now I'm missing the mark. It's a challenge to keep the mash rest at a constant temp unlike an improvised cooler with false bottom.
Back to the drawing board.......I shall prevail! Still learning "Brewsmith" too
At least now I'm in Colorado and near the heart of some great Craft Breweries.

permalink   ·  vote tally
Top
+3
-0
supporter
Keep at it, Matt. I have found that the secret to brew great beer is to brew a lot. I am amazed on how much I forget when I have a long lapse of no brewing, and I have been brewing for 27 years.
permalink   ·  vote tally
Top
+2
-0
founder
supporter
sponsor
I agree. The only way to learn how to brew is to brew.

If you don’t keep a log / journal you might consider doing so. Grain Bill / Hop schedule & a few process noted for each batch you brew. It’s a handy reference guide and a learning tool. If a batch doesn’t meet your expectation compare its notes to a batch that you thought was pretty decent, sometimes you’ll see where you could have done something differently.
permalink   ·  vote tally
Top
+2
-0
founder
supporter
sponsor
Bug season is almost here – time to crank out some brew. This is what I have going right now. I think I’ll do an APA next weekend.

It’s been working for 3 weeks now. The yeast is still pretty active. I’ll rack it off once a week now and give it at least 3 more weeks before bottling.

It tastes pretty decent right now. If the flavor profile doesn’t change a lot in the next two weeks I probably won’t dry hop it. 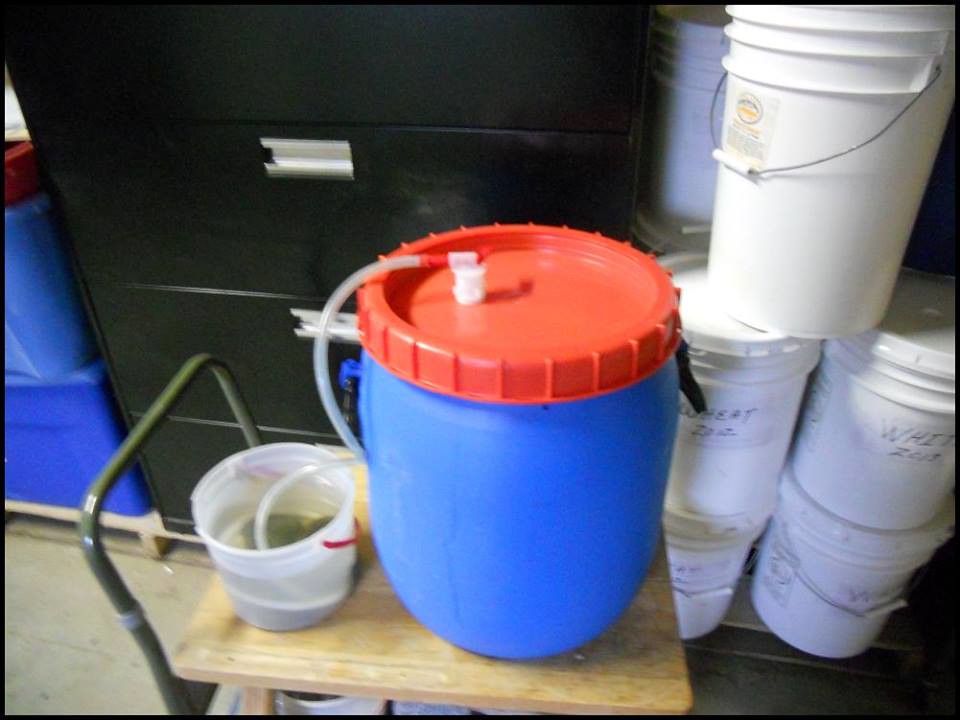 A couple of years ago, I made a mead for a friend. He had bought a case of honey called Prairie Sunshine, from Victor, Montana.

Being from the Bitterroot, it is likely a knapweed honey, which makes the best mead. It had an original gravity of 1.160 which is pushing the limits of yeast. It took a long time to ferment, but it finally dropped clear a couple of months ago.

Saturday he came over and we bottled it. Final Gravity 1.035, so it has and alcohol content of 16%, which is about the highest you can get with regular wine yeast. It tasted quite nice, a little sweet, but no alcohol heat. I think it will be a fine appertif.
permalink   ·  vote tally
Top
+1
-0
SPONSORED
founder
supporter
sponsor
Mead is an amazing beverage.

My experience has been that it needs to age a while to smooth out. But then I don’t have a lot of experience in brewing mead.

I have some in storage in Missoula that was bottled in 1997. I’m guessing it is likely a little over aged : -)
permalink
Top
+0
-0
Post new topic Reply to topic
When was Main Street paved?
Farewell Comments to the Notorious Bill O'Reilly