"The firings were a surprise — especially for Mr. Bharara, who has a reputation for prosecuting public corruption cases. In November, Mr. Bharara met with then President-elect Donald J. Trump at Trump Tower and told reporters afterward that Mr. Trump had asked him about staying on, which the prosecutor said he expected to do."

https://www.nytimes.com/2...trump.html
permalink   ·  vote tally
Top
+2
-4
SPONSORED
Why don't you google how many were fired under Obama and Clinton. You might get a surprise.
permalink   ·  vote tally
Top
+6
-1
founder
supporter
It is normal to ask for the resignations of federal prosecutors. What is NOT normal is telling them to clear out their desks immediately. The NORMAL procedure is to wait until the new prosecutor has been appointed, then there is a transition period. This is will create chaos in the justice system but it's not like conservatives care about justice.
permalink   ·  vote tally
Top
+4
-4
Well, we know that Trump double-crossed attorney Bharara who was investing public corruption and insider trading in New York. Bharara met with Trump at Trump Tower in November and was told that Trump wanted him to stay on.

"Mr. Bharara has been among the highest-profile United States attorneys, with a purview that includes Wall Street and public corruption prosecutions, including of both Democratic and Republican officials and other influential figures."

Amorette Allison wrote:
It is normal to ask for the resignations of federal prosecutors. What is NOT normal is telling them to clear out their desks immediately. The NORMAL procedure is to wait until the new prosecutor has been appointed, then there is a transition period. This is will create chaos in the justice system but it's not like conservatives care about justice.

Ninety three of the Bush U.S. Attorneys. All of them at once. Ninety three vacancies waiting for the Senate to approve warm bodies to fill them. All fired by the Democrats, Reno and Perv.

But I'm sure that couldn't have caused any CHAOS in the justice system because apparently you were totally oblivious to this and were not even motivated enough to use your Google button before running your mouth.

That's pretty NORMAL for you though; shooting from the hip..

You are spot on about conservatives not caring about justice. If they did, Hillary Clinton and half of the Obama Administration would be wearing orange.
permalink   ·  vote tally
Top
+6
-3
moderator
founder
Why is it, Richard, that Trump has failed to follow through on his "lock her up" campaign promise?
permalink
Top
+0
-0
Richard?
permalink
Top
+0
-0
moderator
founder
Yeah, uh, "Oddjob" or whatever it is.

permalink   ·  vote tally
Top
+2
-0
Maybe it has something to do with Trump and his friends in Russia?

"Mr. Bharara was particularly unpopular with two foreign leaders whose nations have loomed large in reports about their ties to some of Mr. Trump’s close aides — and whose citizens were prosecuted by Mr. Bharara.

Mr. Bharara was among 18 United States officials barred from Russia in 2013 in retaliation to American sanctions imposed on Russians accused of rights violations. (Mr. Bharara was barred in response to his prosecution of Viktor Bout, a Russian arms dealer.) 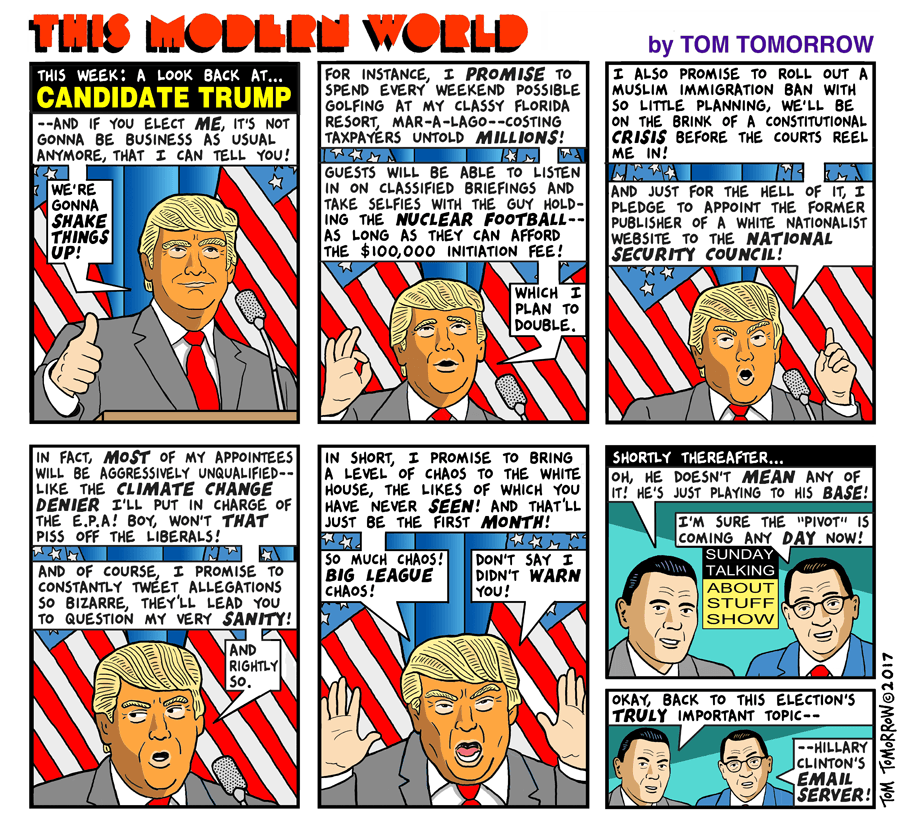 permalink   ·  vote tally
Top
+3
-0
Speaking of Russian caused chaos – not just in the U.S. political realm – but also in the U.S. banking system, here’s something else to consider.

I just learned that back in February 2015, the FBI and the State Department announced a record $3 million reward for information leading to the arrest of a Russian accused of executing a sophisticated computer heist that siphoned more than $100 million from American bank accounts.

I wonder if David Hickton, U.S. Attorney for the Western District of Pennsylvania, who was investigating this cybercrime, was among those U.S. Attorneys fired by Trump? And, if so, who is Trump now going to appoint to carry on this criminal investigation. I'm also wondering with all of his friends and business associates in Russia if Trump even wants these investigations to continue. I heard on BBC News that it is believed that this particular Russian hacker has the backing of the Russian government but that has not been confirmed.

permalink   ·  vote tally
Top
+0
-3
Here’s something else that’s interesting! In reading the article cited below, I learned that since the Russian ruble collapsed in 2014, causing a financial crisis in Russia, the rich Russian oligarch have been eagerly moving their assets abroad and buying up property around the world and in the U.S. (I am assuming these rich Russian oligarchs prefer to own property in countries with a democratic form of government but who really knows. Maybe they don't like the cold Russian winters.)

Slide 8 explains a deal that Trump did with Dmitry Rybolovley whose net worth is $7.3 billion.

“Rybolovlev is (in)famous for his real estate wheeling and dealing via a trust in the name of his daughter Ekaterina. Most controversially, in 2008 the trust bought the swanky Maison de L'Amitié in Palm Beach, Florida, from none other than Donald Trump."

"Trump acquired the property in 2005 at the knockdown price of $41 million and sold it on to the Rybolovlev Trust three years later for $100 million. Rybolovlev never used or rented out the property, and had it demolished last year, raising questions about the deal.”

This deal happened well before 2014, however, does this “deal” smell like money laundering to you or is it just me?

Read and see more at:

And, here's one about Trump's ties to the U.S. mob.