the expression of one's meaning by using language that normally signifies the opposite, typically for humorous or emphatic effect.
"“Don't go overboard with the gratitude,” he rejoined with heavy irony"

• a state of affairs or an event that seems deliberately contrary to what one expects and is often amusing as a result.
plural noun: ironies

"the irony is that I thought he could help me"

synonyms: paradox, incongruity, incongruousness
"the irony of the situation"

• a literary technique, originally used in Greek tragedy, by which the full significance of a character's words or actions are clear to the audience or reader although unknown to the character.
noun: dramatic irony
permalink   ·  vote tally
Top
+11
-1
supporter
Actually, my husband, who is dyslexic, wrote the cutline. It was also proofread by two people who were not me. And shocking as this many seem, people make mistakes. All the time. I am FAR from perfect. If you were hoping to hurt my feelings, sorry. I have made MUCH worse mistakes and will no doubt continue to make them until I die. I will also own up to them but this one is not mine. Steve has a great deal of difficulty spelling because of his dyslexia and your pointing it out is actually kind of mean. He tried really, really hard.
permalink   ·  vote tally
Top
+11
-0
supporter
Something about this thread is bugging me...

...I do agree that Tim calling-out Amorette over a simple misspelling in the local paper is a bit over-the-top. It is minutiae to say the least. In my opinion, it's the kind-of mistake that really could be made by anybody whether they are dyslexic or not. Yes, even in the age of digital spell-check and having a couple people proof-read before publishing, it still happens. If there were facts presented in the article that were wrong and possibly libelous I could see the gripe, but calling someone out over a misspelling? I think there are far worse things in life to be concerned with.

That said, Amorette, did you REALLY just call Tim "mean"?

If one looks through the threads YOU have posted over the years here on MC.com and also, I've noticed, on Facebook, you've had a few instances where you've been rather rude yourself. If I were to wager a guess, I'd say Tim's motivation to start this thread in the first place was likely because of a thing or 2 you've said on here either to him or to others where you certainly could have been more polite. Not that it necessarily justifies Tim calling you out for this petty detail he caught in the way that he did.

I know that, as a historian and newspaper reporter you take pride in having your facts correct and backing your claims with viable sources, but if you're going to present them or counter people by being as "in your face" about it as you tend to be, and name-call, and put people down in the ways that you have, then why should you be shocked or hurt when you are called-out for a mistake you've made given all of that behavior??? I would think you'd have a thicker skin than that. You can dish it out but you can't take it, is that it?

And yes, I am quite aware that I've had my moments both on this website and elsewhere when I've been rude, too. Some will feel that this post is one such instance, and that's fine. I'm not perfect, either, by any means; but I feel quite safe in saying that you, Amorette, are far more notorious for rude posts than I ever will be.
permalink   ·  vote tally
Top
+3
-3
moderator
founder
My take on it, Shu, is that Amorette can be outspoken about her liberal-leaning political views. There is a certain group of people here who don't like her political views and so they bash Amorette at every opportunity as a way to discredit her.
permalink   ·  vote tally
Top
+6
-0
supporter
I would imagine she characterized it as mean because she felt it was directed at her husband, who has dyslexia. I can appear to be an asshole, but if I felt you were picking on my wife, then I'd probably REALLY be an asshole.
permalink   ·  vote tally
Top
+5
-0
supporter
Points well-made, guys...and I did say on another recent post that I do respect Amorette's right to an opinion (as I do everyone else's) I just think she's aggressive and rude at times when she expresses it. I'm also open to the possibility that she may be a very nice person if you meet her face to face (admittedly I don't recall that I ever have, although her brother Bart is a good friend of mine and one of the nicest people I've ever known) but if she is, then she presents a very different side of herself on this website.

Other than that, I look at Tim's post on here and, well, I don't see where he mentioned Steve at all, so I don't see that his pointing-out a typo was directed at him. It was just a petty stab on his part.
permalink   ·  vote tally
Top
+2
-2
Wow! I'm shaking my head at the fact that a simple proofreading mistake -- "collage" instead of "college" -- has led to so many negative comments about Amorette Alison's personality and/or her political opinions. That's a form of mean-spirited on-line bullying in my opinion.

First of all, proofreading is not all that easy and it gets even harder when when one is under a deadline in a busy newsroom. Add a touch of dyslexia to the mix and it gets even more difficult to catch every error. Nobody is perfect. But people do try hard not to make mistakes. The point is we are all human and all of us make mistakes -- intentional or unintentional.

Here are a couple of articles on the subject of imperfections in Navajo rugs and a photo of a beautiful Navajo rug. Can you find the mistake?

permalink   ·  vote tally
Top
+1
-1
Just to clarify to all of you who jump to conclusions, the post was not intended to make anyone feel bad or to put anyone down. It was just an observation that I had made while looking at the milescitystar.com front page image prior to checking the classified ads.

No where did I say anything derogatory to anyone or about anyone. It does go to show the atmosphere on milescity.com and the reason I only come to this page on rare occasions to look at the classifieds.

I should know by now that posting anything on this website is asking for this crap.

If posting this got every ones panties in a bunch, I do apologize, it was not intended to do so.

As for David Schott and his post, I have a problem with spelling, numbers and memory. I have stated that on here before. FMEN Type I has not been nice to me, and I have to read, re read and re read again in order to make any semblance of correct spelling or sentences.

I cannot change that.

I only knew of the responses made here as I received a phone call this AM. I will not be looking back at this site for your responses so hate away.
permalink   ·  vote tally
Top
+2
-2
founder
supporter
Insult me all you want. I have a tough skin. Leave my family out of it. It's that simple.
permalink   ·  vote tally
Top
+1
-0
To err is human; to forgive is divine! Now let's have a good laugh! permalink   ·  vote tally
Top
+5
-0
supporter
sponsor
I get it! You don't really need to smile to work there, right?

FH
permalink
Top
+0
-0
SPONSORED
It's not just English that can get inadvertently screwed up. Take a look at this! 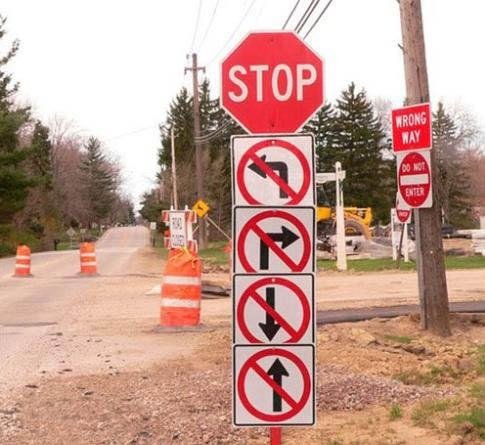 permalink   ·  vote tally
Top
+3
-0
Post new topic Reply to topic
The Truth Has a Way of Showing Up!
Ismay Jail