George Larson, you will be missed by the legions of young people you've employed over the years. You gave my son his first pair of left-handed scissors, and made sure he learned to turn the paper so he would write with his hand in the correct position. You've mentored countless folks through the decades and always made the theatre feel like family. For many young people you and Bob gave them their very first paying job at the Montana Theatre.

For anyone inquiring about a service, here is where it will be posted: http://stevensonfuneralho...es/679035/

The past and present theatre employees-- I will keep you posted on any special announcements or gatherings.

Thank you, and god speed, George. 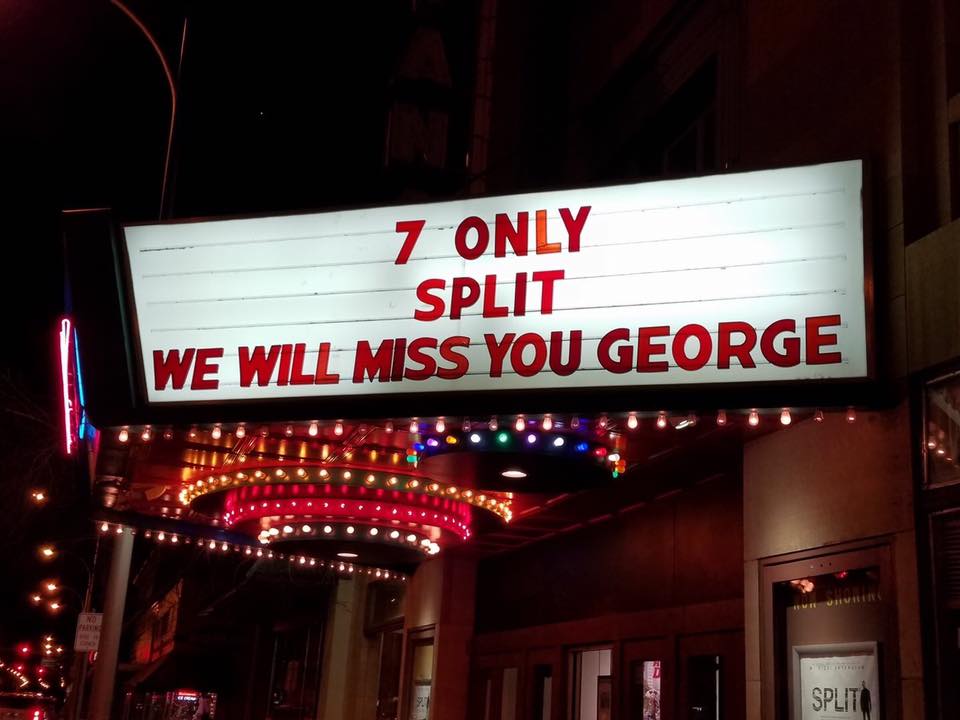 permalink   ·  vote tally
Top
+6
-0
SPONSORED
I will miss George too! George Larson is the photographer who photographed Ted Kennedy riding the bucking bronco at the Eastern Montana Fair during the 1960 presidential campaign. That photo became world famous. permalink   ·  vote tally
Top
+6
-0
founder
supporter
The last touchstone of my childhood. He worked with my mother, Gordie Spear, Pat Gudmundson and Sue Connors in the greatest newsroom the Star ever had. He took my wedding pictures. I will miss him. When I saw the marquee last night, I started to cry.

I met George when I was in the 7th grade. He interviewed me after winning an award at a range judging contest. He was involved as a chapter advisor for many years with the local FFA chapter. When I was a senior in high school I was elected FFA Chapter reporter. I was actually a little disappointed as I had run as Chapter President. George took me under his wing and taught me how to take good pictures and fueled a passion for photography which is still with me today. One of my prouder accomplishments was a slide-show I put together for the 79 FFA banquet. George help me get the equipment together and showed me how it all worked. We had two slide projectors and a box that faded between slides and projectors. He helped me record the sound track. It was state of the art for the time.

George was an audiophile. He owned arguably the best sound system in Miles City. When he went to work at the MT Theater, one of the first items he focused on was improving the sound system. I don't think the average Miles City movie-goer truly appreciates just how wonderful the theater sounds. The MT Theater is a unique experience, unrivaled anywhere. George took great delight in the theater and what it had to offer.

George was also involved in the early days of KXXE, Miles City's first FM radio station. Until that point only AM radio existed. He was always buzzing about what was going on at the radio station and how great it sounded.

George also worked for Xerox as a sales person. He sold a number of FAX machines and word processors just prior to the first computers and Wordperfect.

George was an advocate for sex-education. He arrange annually for Dr. Randall to come give a presentation to the FFA chapter on the topic. George routinely said "have fun, but be responsible".

Cities are sometime spoken of as lights on a hill. Each one of the residents is a candle which collectively make up the cities' point of light. Miles Cities light just became a little dimmer. We will miss George. Rest in peace, George, rest in peace.

[Edited by Richard Bonine, Jr. (2/17/2017 1:30:05 PM)]
permalink   ·  vote tally
Top
+4
-0
founder
supporter
Just came back from George's funeral. Graveside services will be followed by lunch at the Parlor so if you missed the services, please, join at the Parlor for food and conversation, two of George's favorite things.
permalink   ·  vote tally
Top
+3
-0
I hope to add my memories, but first a question...

Did George have *any* family? I don't remember him mentioning anyone...
Except his adopted son, of course.
permalink
Top
+0
-0
founder
supporter
Distant cousins. He kept in close touch with one in Norway and they visited back and forth.
permalink
Top
+0
-0
George took me under his wing in (my) early high school years. He taught me a little about photography, high end stereos, and automobiles. He owned Hasselblad and Leica cameras.

At that time, he owned 2 to 3 BMWs, and spent hours replacing parts, and keeping them waxed and polished. I worked for him as a photographer in his wedding photo business for a few months. I also helped him bring back a BMW he bought, from Great Falls. It was my first time driving a stick shift and I had to run a red light to keep up with him, cause I didn't want to have to take off from a stop, any more than I had to.

I was one of his sources of info, the night he captured the streakers on film and caught flack for running a photo in the paper.

At that time, he was fastidious in everything he did. His lunch was usually canned peaches and cottage cheese on a leaf of lettuce.

George introduced me to the first albums of Seals and Crofts and probably a lot of other little things that I don't remember now.

I almost burned his house down, one day, when I was torching off old paint during a repainting gig.

I haven't talked to George in a long, and almost stopped in last year. Too late now...
permalink   ·  vote tally
Top
+2
-0
George must have grown up in MC, he once told me about how some HS students reassembled ?the principal's? ?Model T? on top of the HS building as a prank.

My first car ('55 Olds) was one that he had once owned, wrecked and sold to Reece Clevenger, who had a parts car in his lot as well, so I drove it until I let it get too low on oil, then tried to rebuild the engine, finally selling it back to Reece. I must have towed that damn thing up to Bozemen and back, in the naive belief that I could finish rebuilding it.

I think it was George's idea for me to try making "apple jack" wine in Reece's root cellar. It wasn't horrible, but not nearly as good as some I made years later by accident in my brother-in-law's fridge.
permalink   ·  vote tally
Top
+2
-0
What was the cause of death?
permalink
Top
+0
-0
One of my classmates at CCHS. A great friend of my mother, Rhoda. A talented and star who stayed in Miles City, unlike me. His classmates mourn his passing as do I. Did not know he was of Norwegian descent, but I am not surprised. I always admired him from afar. Sad day for Miles City. Like some I might have cried to see that marque. Thanks for all you did for my hometown, George.
permalink   ·  vote tally
Top
+1
-0
SPONSORED
founder
supporter
He died of heart failure aggravated by a nasty chest cold.
permalink
Top
+0
-0
Post new topic Reply to topic
Painting Majestic Hair
Glory Hole Drain on Lake Berryessa