permalink   ·  vote tally
Top
+2
-0
supporter
I would guess that he was a bantam weight wrestler. Why Amorette is bringing this up escapes me. Fodder for Oddjob?

permalink   ·  vote tally
Top
+2
-0
supporter
I imagine it has to do with the 1992 state wrestling tournament - I covered myself and CCDHS in glory, being eliminated in two matches.

I was actually 2 pounds under the 152 pound limit, achieved by a steady diet of gluttony and ex-lax.

Next year's stardust will also be somewhat inaccurate,as I wrestled in the 189 pound weight class while only weighing, at most, 175 pounds.

As for the extra "i", my father is sadly unavailable for comment, but between that and Jack Raymond's terrible handwriting, I was announced several times (IN MY OWN GYM FOR CHRIST'S SAKE) as "Brigadier Weed"
permalink   ·  vote tally
Top
+9
-0
moderator
founder
Ha ha, thanks for the laugh, Bridgier. "Gunner", you might be in second place for having your name misspelled.
permalink   ·  vote tally
Top
+3
-0
founder
supporter
I should have spelled it correctly but it was wrong in the 1992 Star and I like consistency.

On that note, here's a beautiful picture of Montana's Bridger Mountains:

Being that I was doing the sports for KATL from '91 to '93 I have this memory of Bridgier which stands out: I think it was his senior year at CCDHS, perhaps...or maybe his junior year? Bridgier started the wrestling season out in the 171 weight class. I think he was doing fairly well. After Christmas break, however, The coach at the time, Jack Raymond, decided to do some shuffling in order to fill some empty spots, I think, so he moved Buck Olson from 189 to the heavyweight class and moved Bridgier from 171 to 189. I recall one match, in-particular, at the Cowboy Invitational where Bridgier had to wrestle a red-headed guy from the Cody, WY team who eventually placed, I think 3rd or better in that weight. Poor Bridgier was throwing EVERYTHING but the kitchen sink at this opponent! He tried a leg scissor, arm bar, gillotine, half-nelson, seemingly every move he could think of, but the guy from Cody was just too much bigger and stronger than Bridgier and pinned him. I remember seeing this match and thinking to myself: this REALLY isn't fair to make Bridgier go against guys that outweigh him by about 20 pounds...I remember asking the coach about this, too, and he was polite about the answer. Bridgier may or may not have gone-on to place 6th or better at that Cowboy Invite but I don't remember that part. Interestingly, Buck Olson, in spite of also being outsized by every opponent he faced, took 4th in the heavyweight class at this Cowboy invite. Buck was smaller, but more lean, muscular and quick and this served him well in that weight class. He beat a noticeably-bigger opponent from Minot, ND, but then lost to the same opponent in the consolation match. Both were close - decided by just a point or 2.
permalink   ·  vote tally
Top
+2
-0
supporter
Well, I don't want to argue with Shu, but I remember it a LITTLE differently.

I was having NO LUCK at 171 that year - I don't think I won a single match in December - every stud in the state was wrestling at that weight in the Eastern A - Houchen from Sydney, Srsen from Glendive, Strange Owl in Colstrip, etc, etc. Right before the Christmas break, we played a little trick on Sidney when they came for a duel - instead of wrestling 171, we shifted Buck and I up a weight class, so that I wrestled 189, and Buck wrestled Heavyweight. Raymond then got this great idea that I'd wrestle heavyweight (which means I needed weigh AT LEAST 189 lbs) after the break. I tried to gain the weight, but I just couldn't get over 180, no matter how much I ate (and I ate A LOT), so Buck went up to Heavyweight, and I went to 189. I actually had a lot of success at the higher weight, there where only a couple of times where I was out-muscled - I ended up going 2-2 at the cowboy that year, which kind of sucked. I think the match that Shu remembers was actually against someone from Powell, who was a bit of horse. After cutting down from 165 to 152 the year before, being able to eat as much as I wanted was great.

My only real regret from the state tournament in 93 was letting that felon (not nearly as disambiguating as you'd expect) from Glendive get into my head - I was going to show him I could throw him, and got thrown instead. And that was that.
permalink   ·  vote tally
Top
+2
-0
moderator
founder
This is funny. Note the headline from page 3 of the December 30, 2016, Miles City Star. Amorette, did you write this headline? 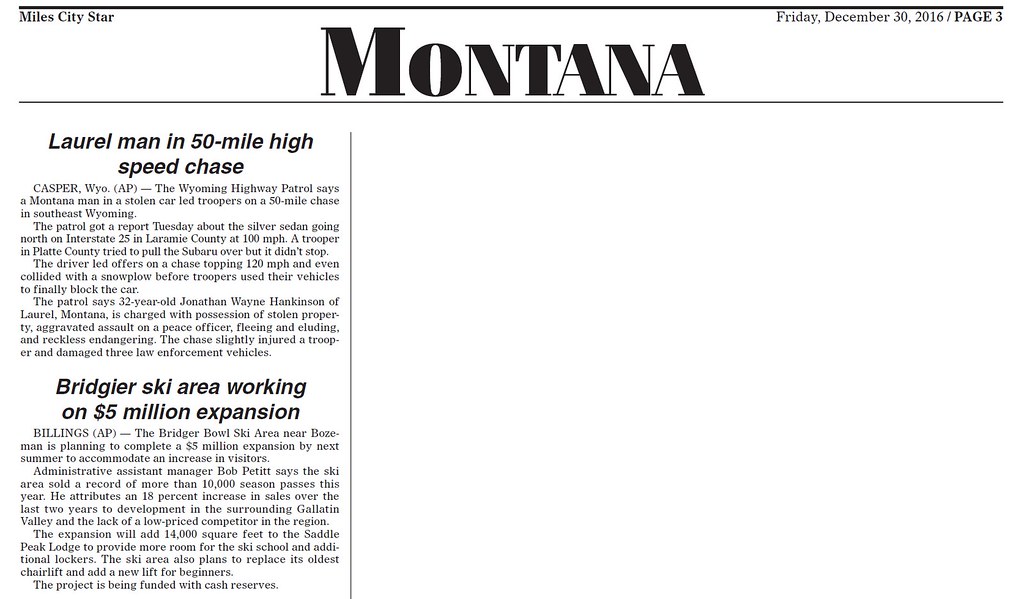