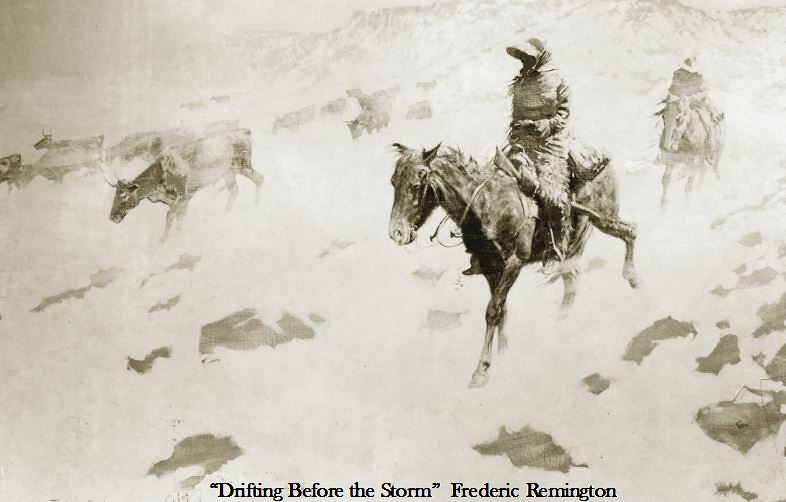 ". . . .I wore two pairs of wool socks, a pair of moccasins, a pair of Dutch socks that came up to the knees, a pair of government overshoes, two suits of heavy underwear, pants, overalls, chaps, and a big heavy shirt. I got a pair of woman's stockings and cut the feet out and made sleeves. I wore wool gloves, and great big heavy mittens, a blanket-lined sourdough overcoat, and a great big sealskin cap.

That way I kept warm enough. But not any too warm. For that was the celebrated winter of `86-87 that broke the back of the range cattle business. . . .

We had two weeks of nice weather just before Christmas. But on Christmas Eve it start to storm and never really let up for sixty days. It got colder and colder. I have a cutting from the post paper at Fort Keogh that reads that on January 14 it was 60 below zero. . . .

Pike [Landusky] had a cabin right close to the [Little] Rockies where he lived with his wife and family. Mrs. Pike was a French-woman from Louisiana. . . . She was a good housekeeper and a real nice little woman when she wasn't stirred up about something, and the only human being I ever met who was match for Pike.

I lived with him that winter and the company [the DHS, Granville Stuart's outfit] paid him for my keep, but we was riding most of the time. . . . [On] December 24, we left our camp at the foot of the mountains and started home for Pike's for Christmas. I remember it was a beautiful day, clear and sunny. . . At sundown we camped close to Tucker's cabin at the north end of the Little Rockies, expecting to be home in time for Christmas dinner the next day. But after dark it began to snow. . . .

Next day the storm was so bad we didn't try to make it home, but rode over to John Healy's ranch on Lodge Pole because it was nearer. We found three men there, so we put our horses in by a haystack and all cooked a Christmas dinner of deer meat and son-of-a-gun-in-a-sack (plum duff). We stayed there two days, but the storm kept getting worse, so we pulled out for home [on] December 27. . . . when we got over the hill the wind and snow hit us so hard we could not see fifty feet ahead or hardly breathe. . . . That night we rode into a narrow canyon where we were out of the wind, but we got off our horses in snow up to our waists. We built a fire and made coffee, and held our meat on sticks until it thawed out and ate it hot and raw. . . .

Next morning we lit out for home and it was fight for life. We had to go sideways to the wind and horses hate that. The wind blew the breath right out of our bodies and the snow cut like a knife. We got home nearly all in. . . . Mrs. Landusky run out of the house and begun giving hell. She said: where was we; and why didn't we come home; and this was a fine Christmas for her . . . alone here with all these children; and she cooked us a big dinner, and so on and so forth. Pike never said a word at first, while she kept on calling us everything she could lay her tongue to because we didn't come home to Christmas dinner, when we like to have froze to death in that awful blizzard and it was wonder we ever got there. And finally he turned to me and he says: "*_*_*_*_*_ *_*_*_*_*_*_! She was sure in the lead when tongues was give out!" 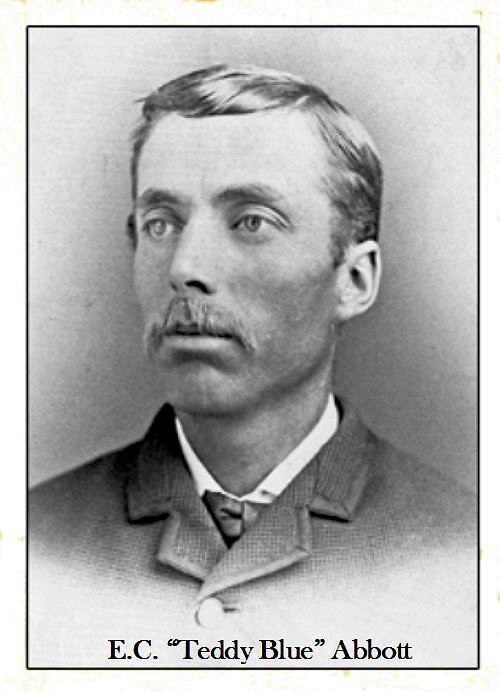 Edward Charles Abbott (Teddy Blue) was born in England in 1860. He was raised in Nebraska and came north to Montana, trailing a herd of Texas cattle in 1883. Mr. Abbott cowboyed and repped for several of the major open range outfits in Montana, including Granville Stuart's DHS spread. In 1889, he married Stuart's daughter, Mary.

Over the years he rubbed elbows with the likes of Calamity Jane, Bill Cody, Pike Landusky, John (Liver-eatin') Johnson, Tom Irvine, and just about any and everyone in the cattle business in Montana from the 1880s to the 1930s.

If you want to know something of what it was like to be a real cowboy in Eastern Montana's Open Range era - you cannot find a better source than Mr. Abbott.

This link will take you to an excerpt from Abbott's memoirs.
http://www.thepastwhisper...ncher.html

This link will take you to another excerpt from Abbott's memoirs.
http://www.pbs.org/wnet/r...yblue.html
permalink
Top
+7
-0
SPONSORED
supporter
Thanks for sharing Hal. There is some great MC stories in The book, WE POINTED THEM NORTH Buy Teddy Blue.
permalink
Top
+2
-0
supporter
Should have remembered it was from We Pointed them North, but still some Miles City stories.