permalink
Top
+1
-0
moderator
founder
People don't wax poetic about the Met Cafe in the same way they do about the Crossroads Inn or the Red Rock Supper Club. That could be because the Met was the domain of an older generation that is no longer (or barely still) with us. The Met must have closed sometime around the mid-1970s so it has been gone for quite a while now.

I barely remember going there. I think my grandparents used to take us (my parents included) to dinner their every once in a while. I would have been just a little kid.

The Met had a casual diner side (on the left as you entered) and a more formal, fancy dining side on the right. I believe that possibly on Sunday nights (which is when we were most likely to go there) the casual side would be closed and you had to eat on the fancy side.

Being the picky eater that I was I wanted to eat from the casual diner menu and probably would have been content with just an order of toast and jelly. If I recall correctly they wouldn't serve from the diner menu if you were seated in the fancy dining room and so I was out of luck when it came to getting toast and jelly. For that reason news of going to dinner at "The Met" was never received well by me. "Ahhhh, do we have to?"

My only other vague memory of the Met Cafe was it seems like there was a back entrance or hallway. When dinner was over and the adults were lingering and visiting, us kids would roam around some. I seem to recall there was a gumball machine or two in that back stairway or entrance where we could go spend a few pennies.
permalink
Top
+4
-1
Just thinking about the Met Cafe brings back the most wonderful memories. The most incredible scents of soup cooking always wafted out to the sidewalk. The waitresses were amazing!
My friends and I used to eat there, drink cherry cokes and feed the jukebox, which were always filled with the top 40. Those times were magical! Kinda wish I could go back in time and do it all again!
permalink
Top
+5
-0
I spent a very memorable evening there in 1975 so I know it was after that when it closed.
permalink
Top
+1
-0
moderator
founder
It would be interesting to know exactly when the Met closed.

If I recall correctly the J.M. McDonald's department store moved from somewhere else on Main St. into the Met Cafe location. Eventually that store became known as Copperfields (?) which I think is what it was at the time the building burned down in January of 1985. I believe there was also a fabric store called the Copper Thimble in that location as well.

Check out that groovy aerial truck the MCFD had in 1985. 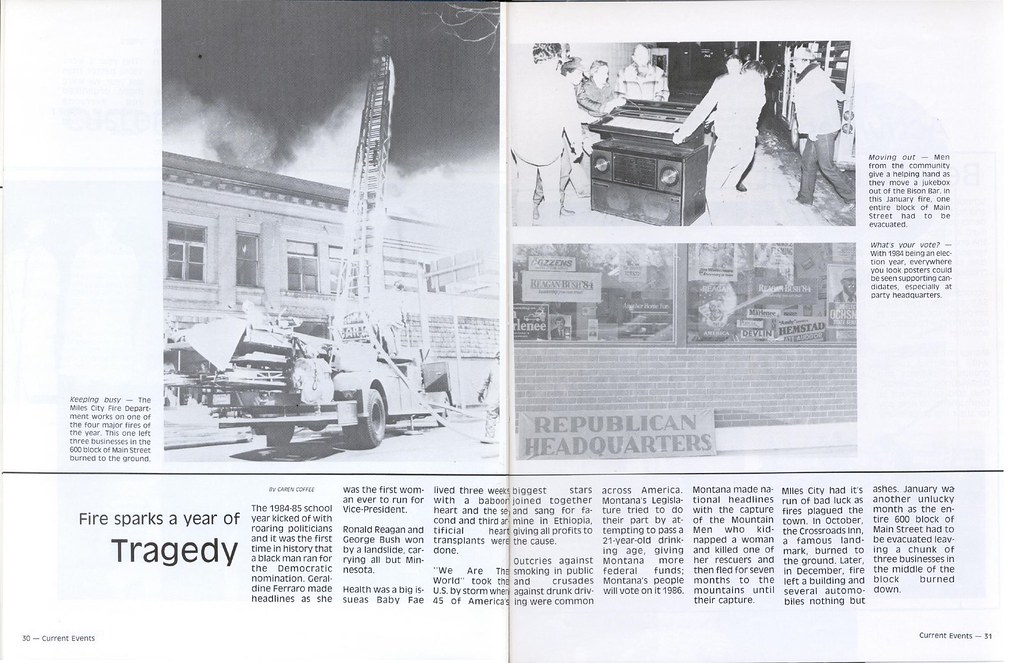 1985 Branding Iron Coverage of Miles Howard Fire
permalink
Top
+1
-0
I remember the Met Café well. My mom used to be a server in I would guess the late 50's or early 60's. Her name was "Jonny". The Met also served as the bus stop for many years where people would get off to eat. I remember the bathroom was in the basement. The other thing that always brings back memories is watching adults order coffee and their cream was brought in those little tiny glass containers which held about a tablespoon or two of cream. Fond memories...
permalink
Top
+1
-0
Post new topic Reply to topic
Patriots are going to overthrow the government
"Bronte to the Future!" Play, CCDHS Monday, 9/26