At least the crowd had the decency to boo Trump.

If I had made that remark, you can be sure I'd be under investigation by the Secret Service for making a threat.

"Mrs. Clinton’s running mate, Senator Tim Kaine of Virginia, expressed disbelief. 'Nobody who is seeking a leadership position, especially the presidency, the leadership of the country, should do anything to countenance violence, and that’s what he was saying,' Mr. Kaine said in Austin, Tex. He called Mr. Trump’s remark 'a window into the soul of a person who is just temperamentally not suited to the task.'

I agree with Senator Kaine. Trump is dangerously out-of-control as a candidate and as a rational human being.

http://www.nytimes.com/20....html?_r=0
permalink
Top
+4
-5
SPONSORED
supporter
Yawn. I hate to repeat posts, but people seem to forget the cycle of Trump. 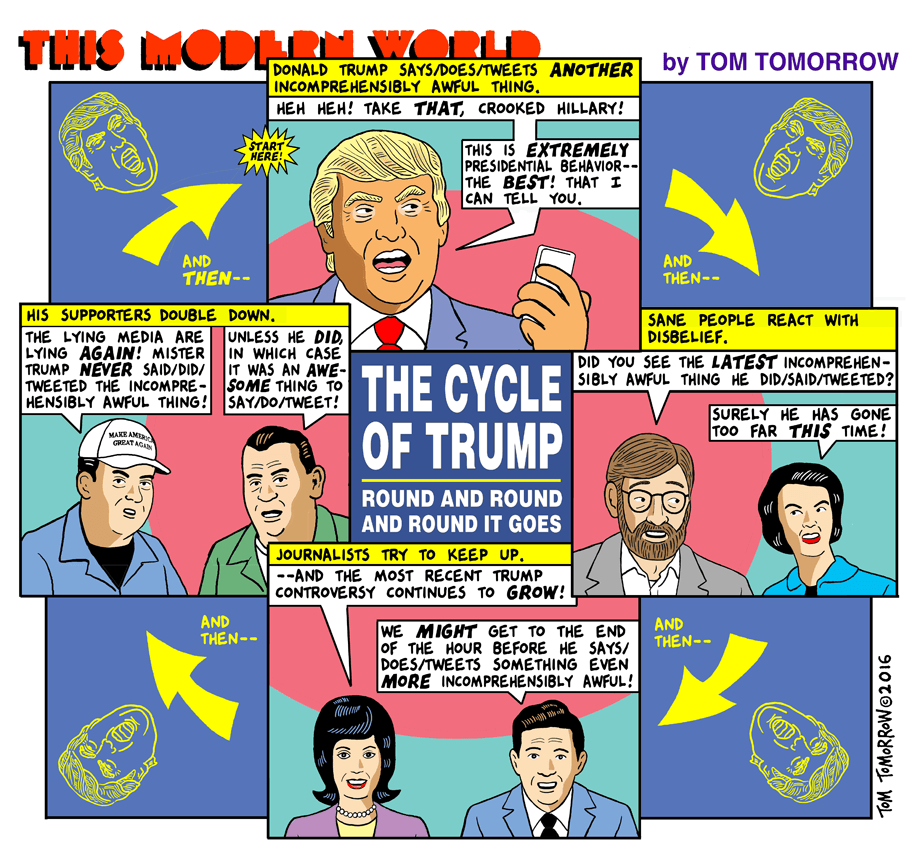 permalink
Top
+0
-2
supporter
Trump accuses Obama of being the founder of ISIS.

Beat you to it, Mary Catherine.

Will the cycle
Be unbroken
Bye and bye Lord
Bye and bye
permalink
Top
+0
-2
supporter
NEW YORK (The Borowitz Report)—The Republican nominee Donald Trump tore into the media on Thursday for what he called their “extremely unfair practice” of reporting the things he says.

“I’ll say something at a rally and I look out and see all these TV cameras taking every word down,” Trump told Fox News’ Sean Hannity. “No one in politics has ever been subjected to this kind of treatment.”

At a rally in Florida, the candidate lashed out at a TV cameraman whom he caught in the act of recording his words for broadcasting purposes.

“Look at him over there, picking up everything I’m saying, folks,” Trump shouted. “Get him out of here.”

In his interview with Fox, Trump hinted that he might drop out of this fall’s televised Presidential debates if the media continues its practice of reporting the things he says.

“I’ve always said that I would be willing to debate if I’m treated fairly,” Trump told Hannity. “But if the media keeps recording everything I say, word for word, and then playing it back so that everyone in the country hears exactly what I said, I would consider that very, very unfair.”
permalink
Top
+1
-1
admin
moderator
founder
You forgot to reference the source.

http://www.newyorker.com/...gs-he-says
permalink
Top
+0
-1
supporter
I did reference the source - the Borowitz report.
permalink
Top
+0
-0
If you don't want people hearing "exactly what you say" you shouldn't speak. Isn't the point of speech so people can hear "exactly what you say"? Maybe he should use all that publicity to say something really profound like maybe that he has some actual plan for the presidency?
permalink
Top
+3
-2
Post new topic Reply to topic
CNA classes?
LaVoy Finnicum Update II