And at about 20 seconds the cops drive by this sign: 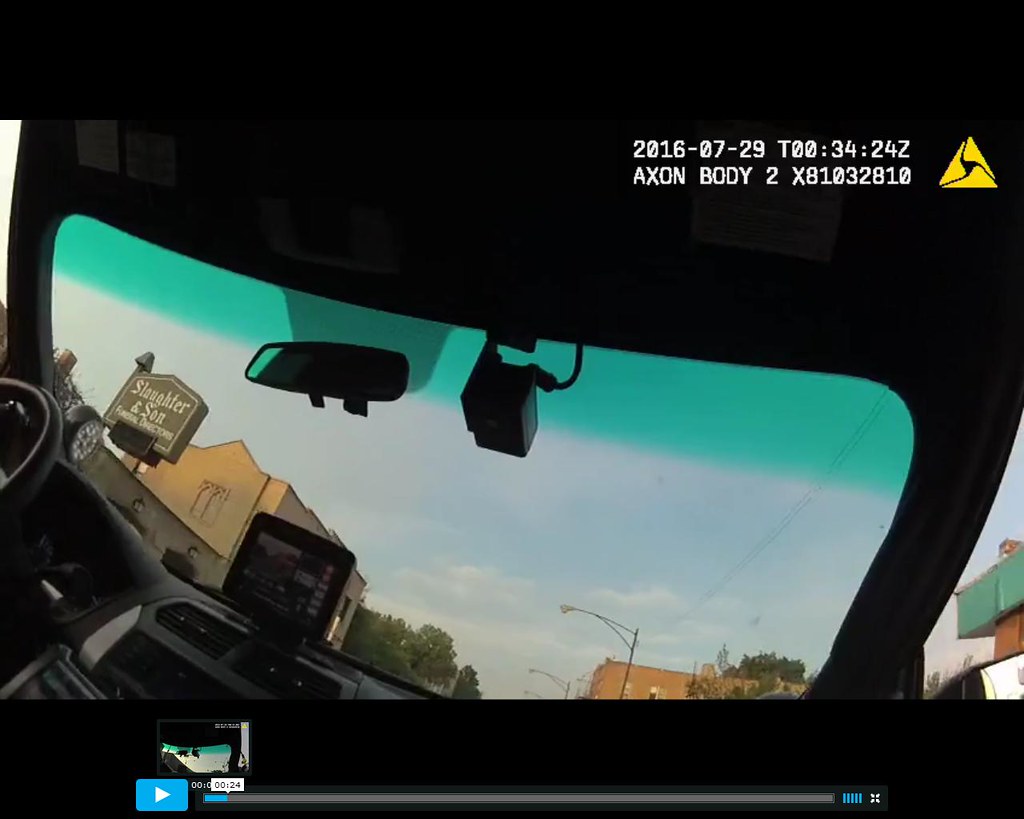 'I don't envy the police. They don't have an easy job. But this was a car. Nobody had been killed yet,' former Chicago Bears safety Charles Brown, who lives across the street, told the Tribune.

'Nobody wins. The police lose. The community loses. The parents have to bury a child.'"

Last I heard, death is not the penalty for stealing a car.
permalink
Top
+2
-1
A outstanding young man just happened to be driving someone else car.
His arrest record should be printed out at the end of the video.
He didn't have a gun but was driving 3-4000 lb car.
permalink
Top
+0
-2
supporter
It is easy to be an armchair quarterback and tsk tsk over police violence based on today's modern technologies, which brings the "evidence" to the internet viewer even before the police management knows what is going on.

Not that I am condoning police brutality, but I think people need to consider what is happening to the police everyday and try to walk a mile in their shoes.

When I was a teenager, I was fortunate to have a long conversation with my grandparent's next door neighbor when I visited on vacation. Mr. Kincaid was a retired Chicago policeman. And this stuck in my young fragile eggshell mind....HE WAS BORN IN FREAKIN' 1887!

To make this relevant, he told me how the African-Americans who served in WWI returned home, and remembered how piss poor they had it. Only now, they were soldiers. So they took to the rooftops and started shooting people. Days went by with snipers firing and police firing back. It was a small war. In this day and age, public outrage would be overwhelming.

This doesn't get mentioned much, for it was so long ago, there was no internet/social media, and the Spanish flu done killed a lot of people. But there are a lot of similarities to 1919 and today. Particularly, our peace officers need our support. Back then, we heard that message and delivered. VOTE TRUMP
permalink
Top
+0
-1
moderator
founder
Dumb kid took a dumb risk and things turned out as bad as they could get for him.

How about that police work, though?

A car in a high speed chase is coming straight at them on a narrow, residential street with cars parked on either side. What do the cops do? Stop their car in the middle of the road in a loose roadblock position then open both front doors and both cops jump out. The approaching car has no choice but to crash head on into the cop car (cops out of car could easily get hurt in that impact) or swerve to either side in the direction of a cop. The kid had no choice and the cops put themselves at grave risk by stepping out of their car. Bad move.

Then the passenger cop starts shooting at the passing stolen car while his partner is directly behind that car in the line of fire. It also looked like the cop shot a bullet through the hood of his own car. Nice work with the firearm.