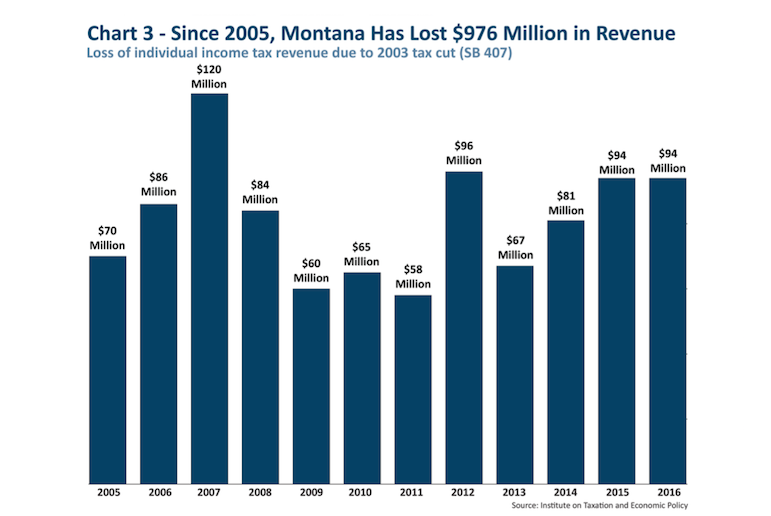 “The Montana We Could Be: Tax Cuts, Aimed at the Rich, Take a Toll,” a report by the nonprofit Montana Budget and Policy Center in Helena, estimates that the tax cuts will have cost $976 million by the end of 2016. That’s enough to pay the deferred maintenance costs for all of the school districts in the state, the report says.

The tax cuts, which took effect in 2005, reduced the number of tax brackets from 10 to six and cut the top income tax rate in Montana from 11 percent to 6.9 percent. The legislation also, among other changes, gave a 2 percent tax credit on capital gains.

Overwhelmingly, the tax cuts favored Montana’s wealthiest citizens, the center argues. Someone making just $15,000 a year now pays income taxes at the same rate as someone making $1 million, the center says, and more than 85 percent of Montana taxpayers get no benefit from the capital gains tax credit. As Last Best News has reported, many Montanans got no tax cut at all from the changes, and some 24,000 saw their tax bills go up.

The upshot is that many middle-income families in Montana pay taxes at a higher rate than those with incomes of $500,000 and more, especially those rich people who make their money off investments rather than by working.

Read More: http://lastbestnews.com/s...n-montana/
permalink
Top
+4
-3
SPONSORED
supporter
And yet, the people who lose the most on this system will defend it as freedom. Crazy.
permalink
Top
+9
-4
Post new topic Reply to topic
GOP Unity
New Inline Ad Spot