http://billingsgazette.co...b8238.html
permalink
Top
+1
-2
SPONSORED
Meanwhile in California they are shutting down wind farms because they're to disturbing to the wildlife. Too much vibration put into the ground and birds fly into the turbines.
permalink
Top
+5
-0
My personal favorite..

The bonus is that Harry Reid and his Chinese buddies second plant just came on line at Tonopah and will be in the business of "streaming" the birds that escape the Ivanpah Plant. A third Reid/Chinese plant will be in the works at Gold Butte, but that's currently on "hold" until they "dispose" of Bundy.

Oh well! It's all for saving the Planet and producing "safe, clean, cheap, renewable" energy!!

Did I mention these plants also burn s**tloads of natural gas they have to buy for when the sun is not shining.......???

Like.. every night..
permalink
Top
+4
-1
Everyone knows the wind doesn't blow at night. Right, Oddjob.
permalink
Top
+1
-4
supporter
To say nothing about the sunlight stolen by plants for 'daylight savings'
permalink
Top
+1
-5
moderator
founder
The article OJ referred to is about a solar energy facility.
permalink
Top
+1
-0
supporter
Burning fossil fuels destroys the environment. Wind turbines are not great for birds. Solar cells use nasty chemicals, as do batteries in electric cars. There is no free lunch. You have to decide which is the lesser evil.
permalink
Top
+3
-3
As most of you Know I seldom post/comment as I prefer to review and learn from all however there are two relatively clean energy sources that have not been mentioned, hydro electric and nuclear but as with the others there are problems with both of these as well. With nuclear the biggest problem is disposals of nuclear fuel and with hydro electric there is the affect it has on aquatic life. I do prefer hydro electric as these systems generally contribute to potential water sports for communities which also supports additional business opportunities for affected communities. I do support clean energy and the options set forth by me and others do address that issue.
permalink
Top
+3
-1
Wind turbines kill around 300,000 birds annually, house cats around 3,000,000,000...

I'm not arguing one way or the other about wind turbines, just mentioning that California, the most bunny hugging state in the western US, is dealing with criticism of wind farms over environmental concerns.

Like Amorette touched on, it doesn't matter what you do, the bunny huggers are going complain.

[Edited by Jesse Smith (5/3/2016 7:28:55 PM)]
permalink
Top
+3
-0
admin
moderator
founder
Although people probably don't want to hear it, or don't want to believe it, nuclear is one of the cleanest sources of energy.

The old 1970's type plants need to go, replaced by newer, safer ones. We should be focusing more in that area. There are ways to make it safe, without the crusty old outdated technology.

Wind and solar are fine, but realistically they can only go so far. Although, every little bit helps - and the technology in those areas are getting better.

I've seen that huge solar complex near the CA/NV border -- and it's kind of crazy to witness for the first time. It's almost like an alien installation, with huge, blinding beams of light shooting upwards ... quite impressive, and a bit scary. It obviously does instantly incinerate anything that flies into its arena.

These photos were taken June 2014 by me, with the crappy cell phone camera I had at the time we were driving by (click for larger view): 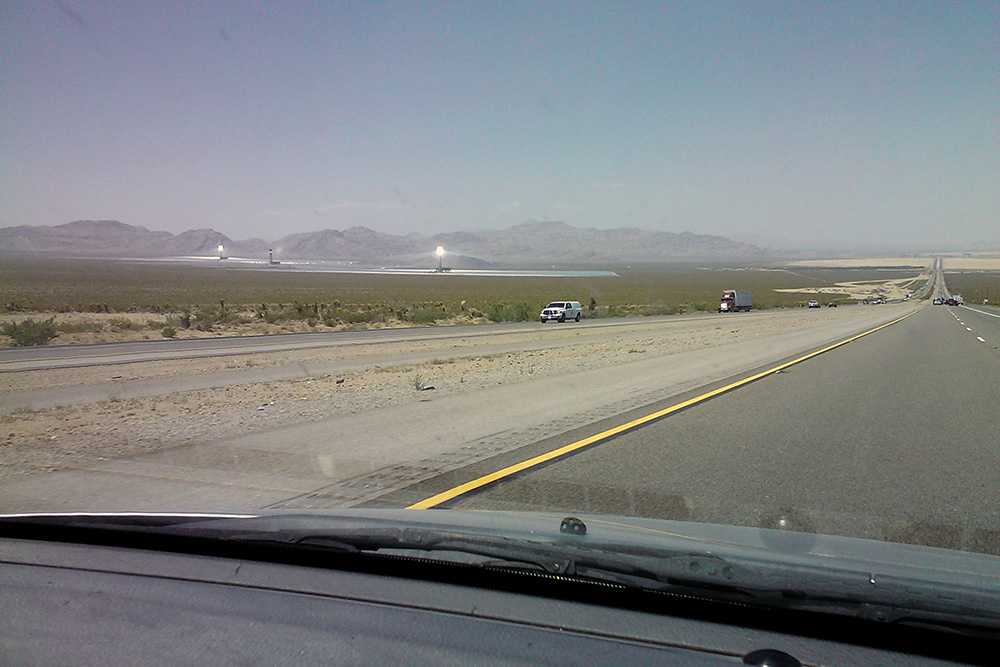 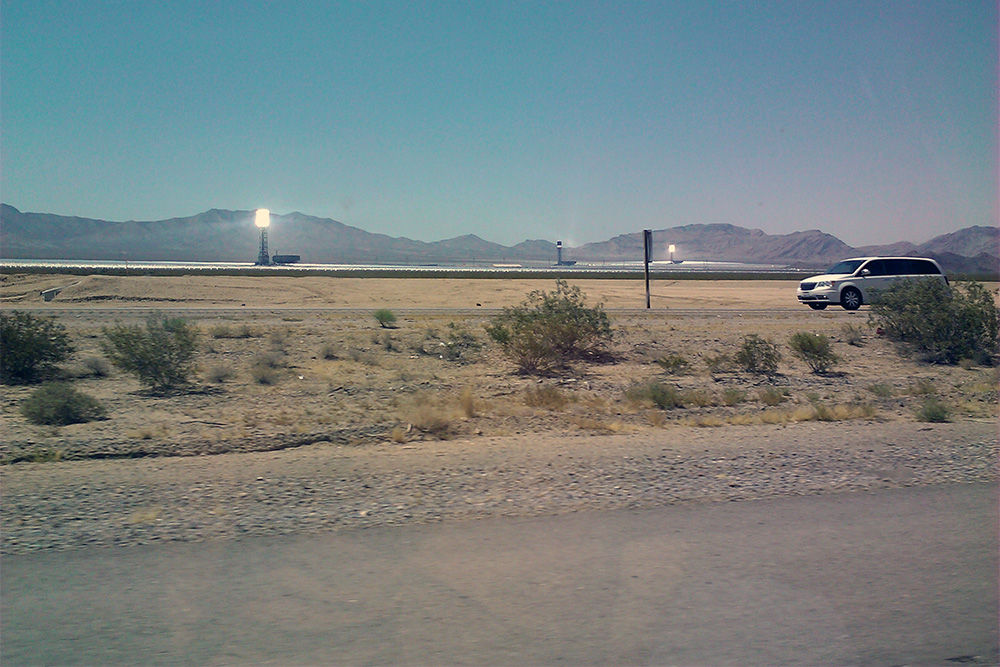 You can't really judge the true scale of the entire thing from those photos, but it does give an idea of what it looks like.
permalink
Top
+2
-1

That's a joke..Right? Something you found at The Onion, perhaps??

Or are you really that gullible?

Ordinarily, that statement would be funny.....but in this case, I think it explains pretty much everything anyone needs to know about the disciples of Gaia.
permalink
Top
+3
-2
supporter
From the article busyb referenced...

Wind turbines kill between 214,000 and 368,000 birds annually — a small fraction compared with the estimated 6.8 million fatalities from collisions with cell and radio towers and the 1.4 billion to 3.7 billion deaths from cats, according to the peer-reviewed study by two federal scientists and the environmental consulting firm West Inc.

"We estimate that on an annual basis, less than 0.1% ... of songbird and other small passerine species populations in North America perish from collisions with turbines," says lead author Wallace Erickson of Wyoming-based West.

I am familier with West Inc.'s work. Wyoming DEQ (a rather conservative group) regularly uses West Inc. for many of their projects where statistical analysis is required. Their work is highly respected and is subjected to substantial peer review before it is published. If they say this is what is happening, it is what is happening.
permalink
Top
+1
-3
Thought everyone would be interested in the Audubon Society's position on wind farms which reads, in part:

"Top scientific experts from around the world, including Audubon's own scientists, agree that the effects of climate change are happening now and will get worse. Scientists have found that climate change has already affected half of the world's species' breeding, distribution, abundance, and survival rates. A review of more than 130 scientific studies found that if climate change proceeds as expected, one in six species worldwide could face extinction. (Emphasis added.)

Audubon’s research shows a particularly stark threat for North American birds: Our Birds and Climate Change Report confirmed that 314 species stand to lose more than 50 percent of their current ranges by 2080.

Audubon and other leaders in the science and conservation space agree that that in order to help prevent species extinctions and other catastrophic effects of climate change, we must significantly reduce pollution from fossil fuels as quickly as possible. This will require rapidly expanding energy efficiency, renewable energy, and alternative fuels and making changes in land use, agriculture, and transportation.

http://www.audubon.org/co...wind-power
permalink
Top
+0
-2
I agree with the webmaster than nuclear would be the best choice. The biggest expenses are of course building the plant, as well as disposal and taxes. It is by far the most efficient form of energy. It is estimated that one plant creates 500 permanent jobs, and power for roughly 700,000 people. I would imagine that is would be possible to retrofit the current plants to reduce costs. If two plants could be built, there would be enough power for Montana and Wyoming, and Montana could become a leader in coal exportation to other plants.
permalink
Top
+0
-0
Well, Richard some "conservatives" are just as prone to take the money from anyone who is laying it out there in search of the answer they are looking(paying) for. I believe West's number for bird deaths from wind turbines. Seems reasonable to me. But they could have quit before it became ridiculous. (Someone who would actually quote a potential range of 2.3 Billion makes all their numbers look fake.)

Oh yes! My greatest fear when working alone in remote areas was having a dangerous encounter with a herd of feral range cats! The World must be overrun in spite of the fact the certain populations and coyotes eat ever one they see! I'm just fortunate that I live in a neighborhood with a couple of guard owls who hammer the s**t out of the local pet population.

But birds and cats are not really the issue here. The issue is wind turbines which are at the apex of their technological development and are always going to be highly inefficient. They cannot exist in the market without government subsidy, government coercion or the destruction of less expensive forms of energy production.(Which is completely insane.)

On top of it all, they are butt-ugly. Read the article and note that Montana is going to get the ugly and Seattle will get the power. Pretty good deal for Seattle.

And when the project goes belly-up, the owners will go away and their rusting generator hulks will remain to crap up the view-shed until they turn to dust.