permalink
Top
+4
-1
supporter
I will be pulling for the Donkeys, but I suspect the Panthers will have a field day.
permalink
Top
+1
-1
Panthers 35, Broncos 21 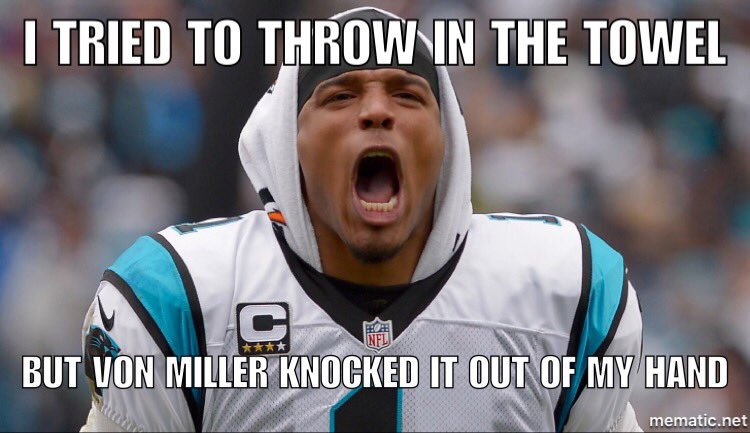 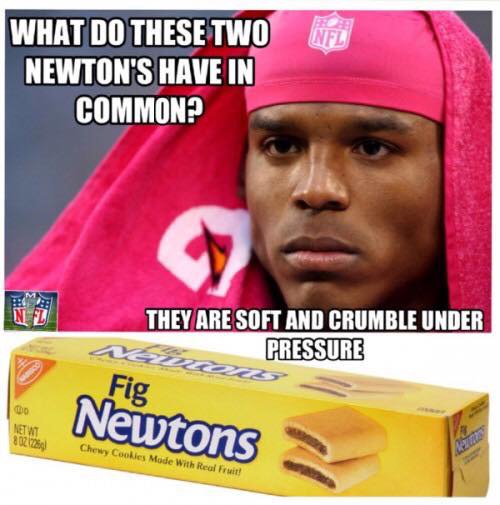 Now, if he said he was going to drink a lot of Budweiser then go to the Daytona 500,that would work.
permalink
Top
+0
-0
I usually don't post controversial things but I have to say I was shocked and appalled when I watched the National Anthem and noticed that The Panthers Quarterback Newton did not have his hand over his heart during it
permalink
Top
+1
-1
founder
supporter
Could live with no hand over the heart but he should have taken his skull cap off and stood up straight. Otherwise Lady Gaga sang the best SSB since Whitney Houston.
permalink
Top
+1
-0
Oh ya I noticed that also
permalink
Top
+1
-0
I am appalled by several things superbowl related;

-as Snickers already stated, the disrespect Cam showed for the FLAG and the National Anthem is in poor taste.

-Peyton "PitchManning" promoting the use of alcohol on during a primetime television event is outrageous. Is he not aware there are church youth groups gathered all over this country for Superbowl parties. Does Mr. PitchManning not understand that his mentioning his wilful drunkenness is one of the seven deadly sins and is a bad role model for the youth of America? It is just flat out wrong to promote drunkenness, beer, and a sinful lifestyle in such a flagrant manner. This is his "wardrobe malfunction" moment. Both Mr. PitchManning and CBS own the youth of America an apology for this egregious behavior. He is a despicable role model.

-Frankly, we ought to consider banning football and the superbowl as this "sport" is physically dangerous and promotes many things that are wrong with our country. Beer, drunkenness, scantly clad women, violence, poor role models, etc. The billions of dollars spent on this sport would be better spent feeding the poor and providing housing for the homeless. Football needs to cease its existence.
permalink
Top
+1
-6
supporter
Cottonwood kid, you need to take your family and go live in a bubble FAR FAR away from everyone else. That is the only way your going to keep them safe from all the harm in this big bad world.
permalink
Top
+3
-1

cubby wrote:
Cottonwood kid, you need to take your family and go live in a bubble FAR FAR away from everyone else. That is the only way your going to keep them safe from all the harm in this big bad world.

I disagree. We need to eliminate events like the superbowl that promote debauchery and violent sports like football.
permalink
Top
+0
-5
founder
supporter
Putting your hand over your heart is a choice. Bowing your head in silent prayer, is a choice. What I find obscene is the fact that the AFL and NFL, Like churches, are non-profit organizations. (Shouting) ARE YOU F*#%kING KIDDING ME! "Well, that's all I've got to say about that".

Lady Gaga knocked it out of the park. The best I've heard in a long time. All of you 2nd amendment freaks out there, the hand placement, join us in prayer and head bowing are 1st amendment things, forgotten and unimportant to many. As for Newton he should have kicked some Offensive line ass. Don't forget those years that Elway got sacked every time he blinked.

Hmmmm, lets see, what else? Oh! I enjoyed the Game. Downtown Denver was a zoo at the rally. It was a million person, drunken, sea of orange.

I watched from the comfort of my home.

permalink
Top
+1
-0
supporter
I came THIS CLOSE to telling my facebook friends that I hoped all of these new Denver 'super bowl babies' caught the Zika virus (although they were probably going to just grow up to be Bronco fans, and how would you know the difference), but I exercised restraint and deleted the post, unset. Adulting sucks.

Anyways, I'm VERY excited to see where this HGH investigation goes - it will be interesting to see if all the haters who spent the last year flogging 'deflategate' will have the same level of dudgeon for, you know, actual cheating.

And finally, I'm glad to see that the Ravens were fully justified in ditching Michael "What's the Snap Count?" Oher several seasons ago. The Flakken deserves better.
permalink
Top
+0
-0
SPONSORED
"Anyways, I'm VERY excited to see where this HGH investigation goes - it will be interesting to see if all the haters who spent the last year flogging 'deflategate' will have the same level of dudgeon for, you know, actual cheating."

I agree. Mr. PitchManning should have his sorry ass thrown in jail for this kind of fraud. Perhaps after he goes to jail, the entire NFL can be exposed and shut down. It needs to happen if this country is ever going to get back to the family values that have made us strong.

The few ambassadors of family values in the NFL, like Tim Tebow have all been flushed out of the system. America likes its scantly clad women and its violence. And the two collid on super bowl sunday which has a higher incidence of domestic violence than any other day.

We need to rid ourselves of the NFL if we are ever going to get back on the path to righteousness.
permalink
Top
+0
-1
Post new topic Reply to topic
Boys (and girl) in Burns, Ore.
Kinsey Bridge Pictures