The Peden's
Belfastbeau
Amorette Allison
Belfastbeau
cori schock
MilesCity.com Webmaster
MilesCity.com Webmaster
MilesCity.com Webmaster
Amorette Allison
cori schock
Amorette Allison
Billie Goggin
MilesCity.com Webmaster
MilesCity.com Webmaster
Billie Goggin
MilesCity.com Webmaster
MilesCity.com Webmaster
Gunnar Emilsson
Belfastbeau
Cory Cunningham
Cory Cunningham
Post new topic Reply to topic
Hello everyone.
I'm stuck here in Belfast NI and need some help regarding the Peden family in Miles City. I've been told that they were a well known family in the Montana area and would like to hear from anyone who could help with information.Better still a living family member would be fantastic. Hopefully Belfast Beau.
permalink
Top
+0
-0
SPONSORED
founder
supporter
I don't have a living family member but while doing the history column for the Miles City Star, I came across the obituary on Sept. 3, 1940, for a 96 year-old Mrs. Ellen Peden. She had five surviving children (listed by name), 19 grandchildren, 30 great-grandchildren and three great-great grandchildren (not named.) If you are interested, I can copy the obit for you.
permalink
Top
+0
-0
Hi Amorette.
I'm really pleased you replied to my post, I've been browsing the forum hoping something somewhere would mention the Peden name. Your obviously quite involved in the running of the forum and thanks to your good work I can now add quite a few more names to our Family Tree. This family originated in Scotland and Ireland, although most of the Historians have been mistaken because they both arrived in the USA on a ship that sailed from Scotland. Letitia (Nelson)Peden was born in Barnaghmaghery, Killinchy, Co.Down, Ireland now Northern Ireland. I'd be delighted if you would send me a copy of the Obituary. Belfast beau.
permalink
Top
+0
-0
supporter
It appears that David Peden has two great grand daughters who live in Montana. Dotty Cauthron Watts(husband Herbert) in Livingston and Roberta Mae Cauthron in Bozeman. Great great grzndsons Kenneth Watts and Charles Watts. I have to go out to the Range Riders next weekend, and I will ask the curator if he can point me in the direction of David Peden's photo and information. I bet there will be some good history on Mr. Peden out there!
permalink
Top
+1
-0
admin
moderator
founder
I believe I'm related to the Peden family. I don't have access to my genealogy database at the moment, but ...

Around 1900 Mr. McFarland came to Miles City where he also had relatives. He worked at the County Farm for several years which was managed by Dave Peden.

Dusting Off the Old Ones also mentions Dave Peden:

Among the cowboys who worked for the E2 during the companies' operations were such fellows as Dave Peden, Allie Ward, Jimmy Gibson, Ray Tarbell and Johnnie Milroy.

Other early-day employees of the exchange were Miss Ada Vance, who was the first night operator, Mabel Henderson, Julia Peden and Ethel Weaver.

Something about this area of the United States has a special appeal to people of Scottish decent as the considerable vigor of the Caledonian Society here proves. One of these Scottish families had to travel a round-about route to arrive, but it did.

David Peden was born Nov. 25, 1863, in Ayrshire, Scotland, and Letitia Nelson Nov. 22, 1858 in Edinburgh, Scotland. Davie’s parents, John and Ellen McFarland Peden moved about 1866 to Ireland where Dave received his education so it was from Ireland that he came to the United States to settle first in Battle Creek, Mich., in 1884. Miss Nelson had come to Battle Creek two years earlier to join a brother.

Dave continued to work for the E2 where Mrs. Peden was known as the “Cowboys’ Angel.” She administered to the sick and was also an excellent cook and any cowboy arriving at their home knew he could get a good meal. If no one was at home, the cowboys would cook a meal, wash the dishes and leave the house in order.

Mrs. Peden had pets including two antelope with rather unusual names, a sheep, a dog and two cats which followed her about the ranch. In the evening she would call, “Malcolm, Mathew” and the antelope would come bounding over the sage brush for their supper.

In 1899, Dave was appointed superintended of the Custer County Farm. In 1907 the family moved to a farm in the valley. His brand was NW.

Dave threshed grain of various kinds for farmers for miles around. The machine was operated by a “whim” to which horses were hitched and moved in a circle for power. Later he bought a J. I. Case steam engine and pulled the thrasher from farm to farm to provide power. His daughter, Julia, known as Jo, also became very proficient in operating the engine.

The farm families gathered at the Kircher School for Saturday night dances. Each family took turns providing the midnight lunch. In winter a team was hitched to a bobsled which contained buffalo robes and heated soapstones for warmth and the family would be off to a country dance, maybe in the Pine Hills.

Mr. and Mrs. Peden were members of the Caledonian Society of Miles City and enjoyed Scottish gatherings.

In 1911 they sold the farm and moved to Miles City where Dave joined the police force. In 1920 they moved to Big Rapids, Mich., and farmed but the next year he sold the farm and returned to Miles City. Dave worked at Ft. Keogh then until about 1927 when he became a guard at the State Penitentiary at Deer Lodge. About 1936 he returned to Ft. Keogh for a time and then went back to work at Deer Lodge, retiring in 1941.

Mrs. Peden died in August, 1941, and Dave in March, 1947. Both are buried in Custer County cemetery in Miles City.

Peden children were, Julia Emily who married Charles Edridge and lived in Portland and Earle Stuart who married Myrtle Barton and lived in Miles City, are deceased. Agnes Stuart married Sterley A. Miller and lives in Billings. Earle Peden arrived in Montana with his mother and sister, Julia, in 1892 by train to live on a ranch in the Ekalaka area. Earle had been born June 2, 1889, in Raton, New Mexico Territory, to Dave and Letitia Nelson Peden.

Dave Peden joined his family in September, 1892, making the trip north with a trail herd for the E2 Concord Cattle Co. Earl learned to ride horses at an early age and as soon as he was old enough helped on the roundups and with the branding. After the family moved to the Custer County Farm, where his father was superintendent, Earle helped with the farm work as he also helped when they began farming in the valley. Earle broke horses to ride and to drive or work as a team.

Earle attended schools at Glenrock, Kircher and Miles City and went to an auctioneering school in Missouri about 1909. On June 8, 1911, he was married to Myrtle Barton in Miles City.

About 1916 Earle was a city fireman and in 1918 he was a fireman on the Milwaukee Railroad in Miles City but when in 1919 employment in that line became very uncertain the family moved to a farm at Big Rapids, Mich. They farmed there for a few years and then returned to Montana. Earle worked at the Ft. Keogh Experiment Station until retiring in 1958 and also helped at the sales yards when sales of cattle, horses, sheep and hogs were at their peak.

Earle and Myrtle Peden had three children. Their son, Glen, and his wife, Millie, live in San Diego, Calif. They also had twin girls, Davina and Rosina, who both live in Miles City. Davina (Dot) is the wife of William (Dutch) Fulton and Rosina is the wife of Anton Spek. Rosina’s first two husbands are both deceased. Funeral services for the late Mrs. Ellen Peden, 96 year old resident of Miles City for the past 33 years, were held Tuesday afternoon among beautiful floral decorations in the First Presbyterian Church, where she had held a membership since coming to the city with her husband in 1907.

Relatives and friends of the aged woman gathered at the church for the ceremony which was conducted by Dr. Charles A. Hawley, interim pastor at the church. Beautiful music for the occasion was arranged by Mrs. Edgar Taylor.

The late Mrs. Peden was born in Raffery, County Down, Ireland, on April 17, 1844, and in 1861 she was united in marriage to John Peden in Ireland. Eleven children were born to the couple, five of whom survive. The surviving children include Davis Peden, Deer Lodge; Mrs. Mary Hall, Sugrite, N.M.; Mrs. Mary Arkle, Nodesha, Kansas; James Peden, Miles City, and and Mrs. E. V. Wilson of Miles City.

Mr. and Mrs. Peden moved to the United States from Ireland and after residing in New Mexico for 17 years, they moved to Montana and later Miles City. Mr. Peden preceded his wife in death, having passed away 21 years ago. After his death, the late Mrs. Peden made her home with her daughter, Mrs. E. V. Wilson.

The host of friends of the deceased woman and her relatives expressed their sorrow at the passing of the kindly woman. While in Ireland, she was united with the Presbyterian church and continued to be an earnest church worker after coming to this country.

ETA: Somebody can't count. She lived to see four generations of direct descendants, not five.

[Edited by Amorette Allison (9/8/2015 6:49:03 PM)]
permalink
Top
+2
-0
supporter
To add to the living relatives, I believe Helen Lundby is the daughter of Davina Peden Fulton.
permalink
Top
+0
-0
founder
supporter
Do seem to be different families. For example, there is no 'Earl' listed among the old lady's survivors but, on Sept. 15, 1940, "The Neighbors of Woodcraft Thimble Club met at the home of Mrs. Earl S. Peden at Fort Keogh." You will be happy to know that the hostess served delicious refreshments at the close of the meeting.
permalink
Top
+0
-0
Additional living relatives: David Anderson, Rosalie Hurd, Billie Goggin. Would be interested in information on the Irish family.
permalink
Top
+0
-0
admin
moderator
founder
I found my genealogy database. The Peden family is definitely part of my family tree. Here's an overview.

NOTE: The following may not be exactly correct, however I believe it's fairly accurate. I researched this 15 years ago, but this branch was not my main focus -- so I don't have a lot of details or sources, basically just notes.

I guess that makes us shoestring relatives.

Her parents, "Hugh McFarlane" and "Sarah Robinson" are our common ancestors. For both of us, they were our ggg-grandparents.
permalink
Top
+0
-0
admin
moderator
founder
Here's some more info ...

NOTE: The death date of Hugh McFarlane is probably wrong. Perhaps it should have been 1851? I don't have any way to look up the correct info right now.

Generation 2
2. HUGH MCFARLANE, son of Andrew McFarlane and Jane Johnston, was born in 1821. He died in 1841. He married SARAH ROBINSON.

Sarah Robinson and Hugh McFarlane had the following children:

Jane Johnston and Andrew McFarlane had the following child:

i. Hugh McFarlane was born in 1821. He died in 1841. He married Sarah Robinson. She was born in 1827.
permalink
Top
+0
-0
supporter
My wife and I are flying to Scotland next Thursday. I will sip a wee dram in your honor.
permalink
Top
+1
-0
Hello Amorette.
I'm over the moon with the responses to my posts, I'll have to lock myself in the computer room while I go through all the info. The extended family of John Henry and Ellen Elinor were the biggest surprise, my main interest were the descendants of David and Letitia. My main family interest is from the Nelson line. Please express my thanks to all who contributed to this overwhelming response.I hope I hope will be able to reciprocate research in Northern Ireland if required email [email protected] Again Many thanks.Belfast beau.
permalink
Top
+0
-0 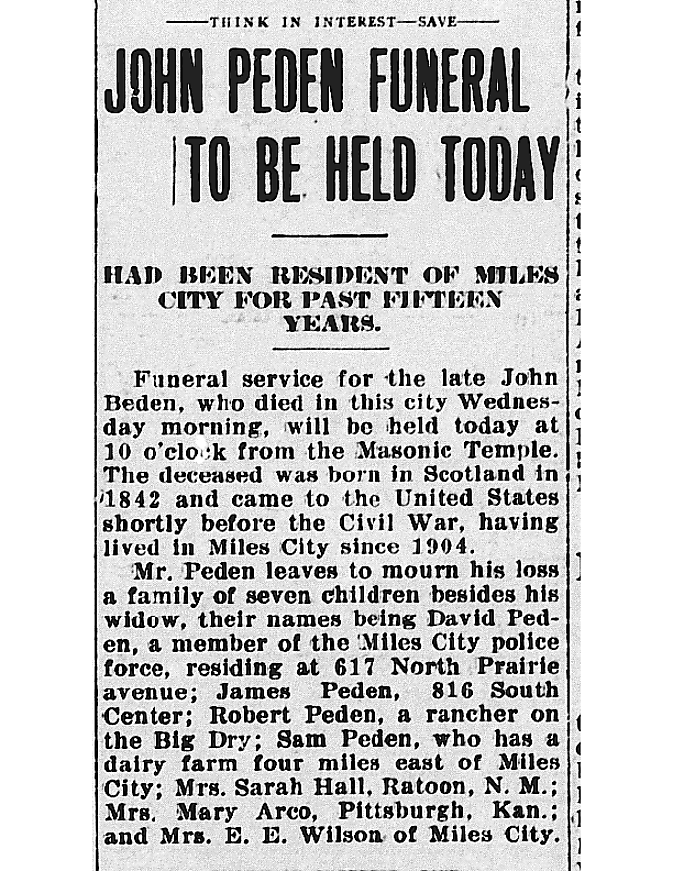