http://www.milescitymaltfest.com/
permalink
Top
+2
-0
SPONSORED
You know what I don't get. All you commies post with great regularity about your love for craft beer and music. Yet, this post, informing about an actual maltfest happening in this websites namesake, sparks 0 conversation. Quiet as a church.
permalink
Top
+1
-5
founder
supporter
I am allergic to hops and prone to heat stroke so I wasn't an attendee but my younger brother went and a great time. He is looking forward to next year.
permalink
Top
+1
-0
moderator
founder
I'd be there if I wasn't 1,000 miles away.

Anyone have some pictures to post? What breweries were present? Any favorite beers?
permalink
Top
+0
-0
supporter

You know what I don't get. All you commies post with great regularity about your love for craft beer and music. Yet, this post, informing about an actual maltfest happening in this websites namesake, sparks 0 conversation. Quiet as a church.

There are no commies here. I am 900 miles away where it is cool and we are enjoying the monsoons. I would have loved to attend.

All the commies. I guess if one is a staunch conservative, you could view most of the regular posters on here as commies. Being new to the forums, I have noticed how many who frequently post lean to the Democratic ideology, but I am not sure they are dyed in wool communists...yet!

As for me, I can not wait to move out of this desert and get to a town that actually offers its people something to do, like Maltfest or the Barbecue Cook-off, or a REAL fair, or the Bucking Horse Sale, and much more!
permalink
Top
+3
-1
supporter
It would be nice if someone who actually attended this event would post something about it, like what they thought were the most memorable beers were, how was the food, how was the band, etc.

I passed on the 350+ mile drive to attend, sorry. Plus, I have an aversion to visiting Miles City in the summer time. I see it was 101° on Saturday.

Looks like I will not be coming to Miles City this fall either, as I struck out on the 700 district goat tag.

permalink
Top
+0
-0
moderator
founder
The one person I spoke to who went commented that the attendance was not great. He said that he tried beers (i.e. raspberry wit) that he wouldn't want to buy a lot of -- so it was a chance to get a small taste of unusual beers.
permalink
Top
+0
-1
Commie is a shortened reference to their digital location. As in dot com. Not political affiliation. I went to the concert on Friday night, it was very well attended. Cody Canada was excellent. There was 3 or 4 breweries there that night with plenty of different craft beer to choose from. I had a couple from Beaver Creek. I know there were more breweries on Saturday. As far as pix there a couple on the official facebook page https://www.facebook.com/...5028830607
permalink
Top
+0
-0
I thought attendance at the concert Fri. evening seemed a little lighter than what I personally expected. But I was told by a friend of the organizer who was heavily involved in helping set up, etc., that the committee was happy with the attendance and that it was 100 more than what they had hoped for.

Didn't get to go on Saturday but heard it was good as well.

Personally, I would like to see the beer sampling, that took place during the day on Sat. this year, happen during an evening. Sampling a bunch of craft beer in the middle of the day, doesn't seem like the most 'timely' of ideas. Sidney does a similar event but its all in one evening and seems to work very well.

The venue was cool, concert was good, and think Dr. Williams did a nice job with this.
permalink
Top
+1
-0

Wicked Awesome wrote:
Commie is a shortened reference to their digital location. As in dot com. Not political affiliation.

Wow! I guess we learn something new every day. I have never heard of dot commers refered to as commies until now.

Hopefully Maltfest has had a good beginning and is something that can be built upon.
permalink
Top
+0
-0
The Maltfest was great.Lots of "interesting" beers and lots that I would love to try again and again. I thought attendance was OK for the first time. Having more shade and water available would be my only suggestions for next year. btw, Missoula Draftworks is amazing!
permalink
Top
+1
-0
I bought tickets to attend and was unable to go. Sounded like a good time but a bit hot in the day for just tasting beer. Next year I will buy tickets again just to support them either way.
permalink
Top
+0
-0
founder
supporter
It was hideously hot! I spoke to at least two people who planned to attend but the heat prevented them. They had spent Friday at a softball tournament and were 'heated out.'
permalink
Top
+0
-0
Yes it was hot, but we still had a great time. We took our family to the event on Friday evening and everyone had fun. I thought the concert was well attended for a first year event, and overall the board did a wonderful job putting on the festivities. The addition of the race on Saturday morning was nice as well. I didn't attend the tasting on Saturday, but my husband had a good time despite the heat. I'm sure it was all a learning process for the people who put it on, and I am looking forward to seeing this event happen each year in our community.
permalink
Top
+1
-0
moderator
founder
I recently obtained a copy of the guide/program from the 1st Miles City Maltfest. Posting it here for anyone who might be interested in seeing what breweries and beers were available. 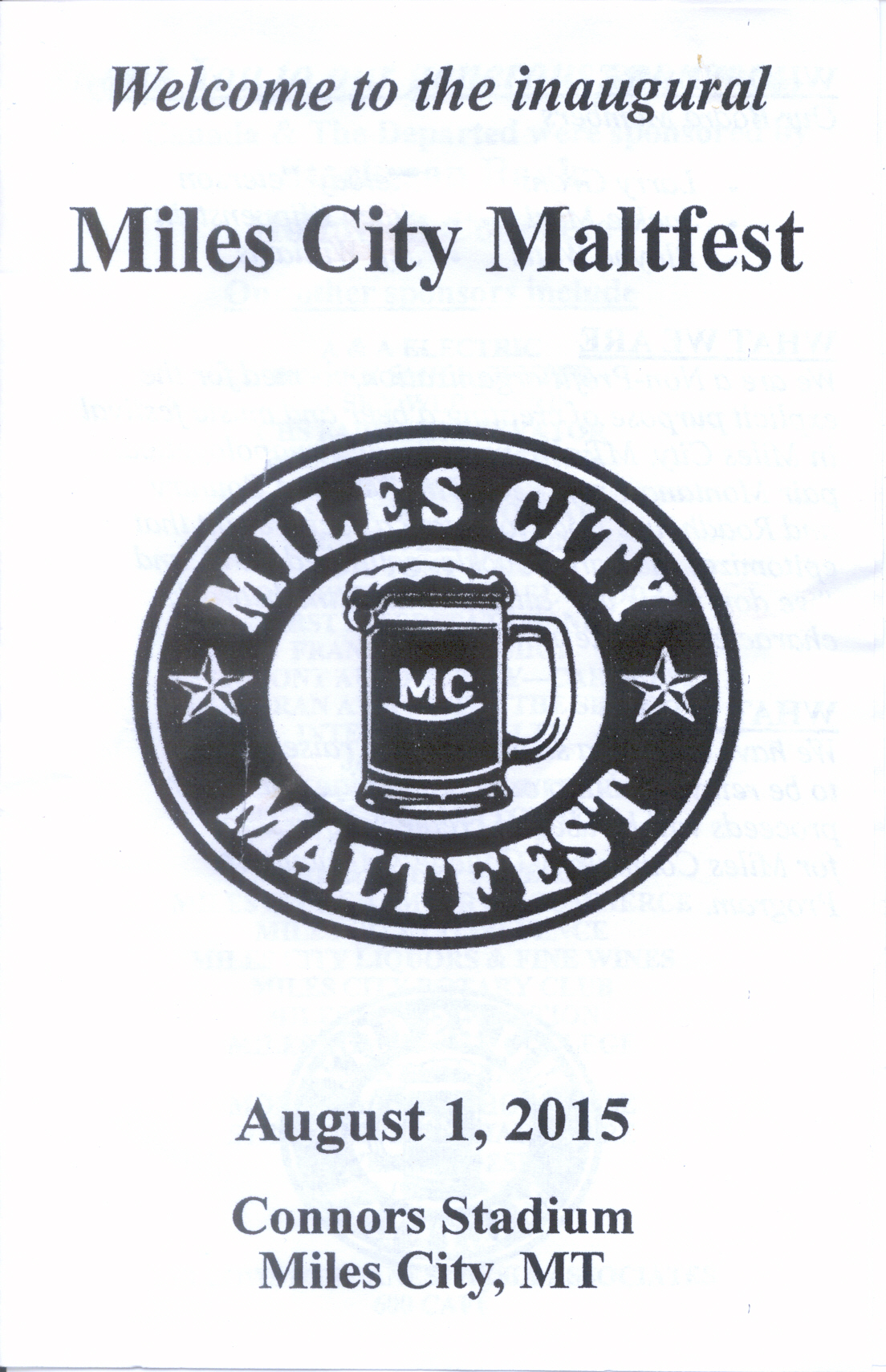 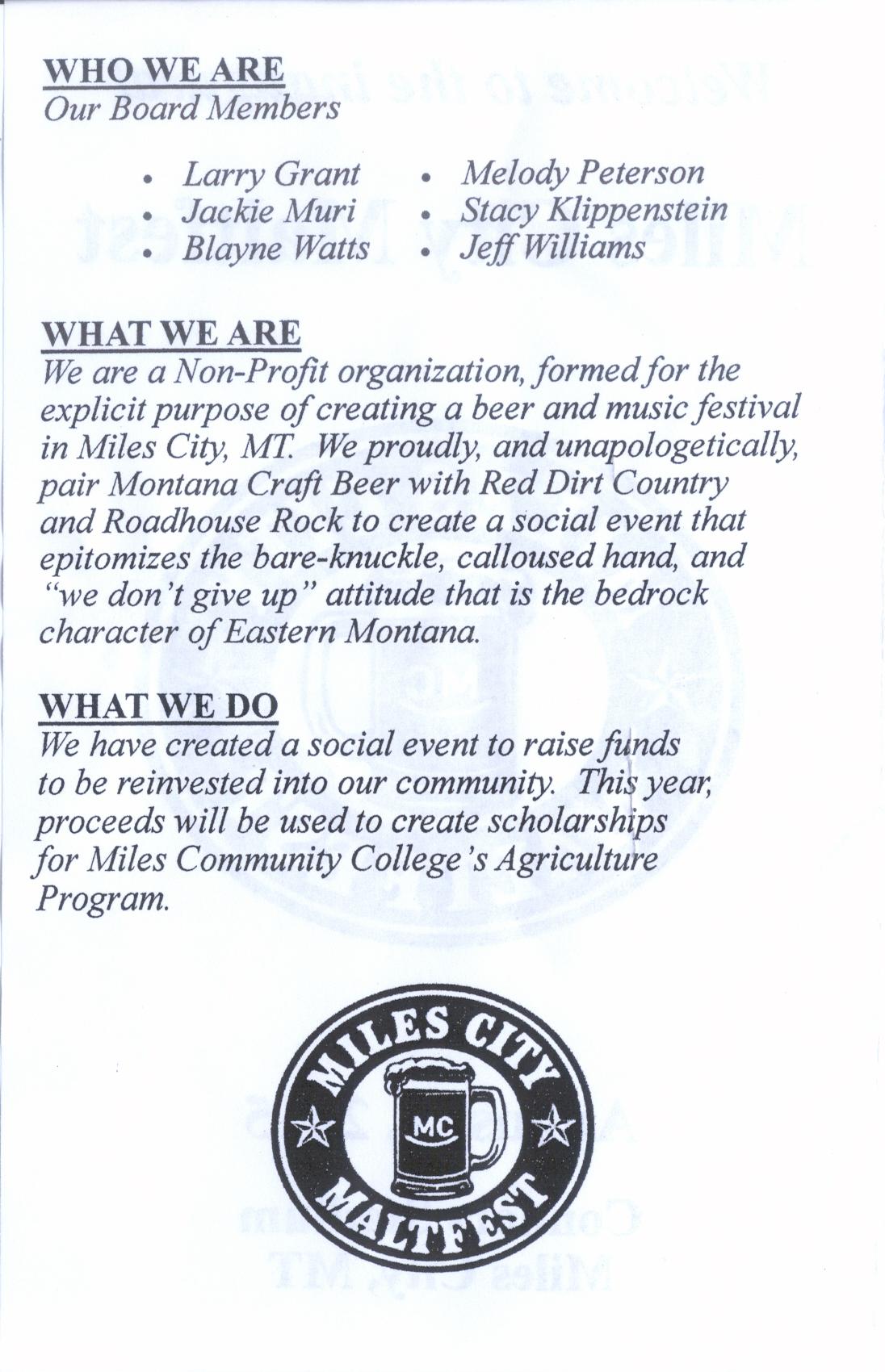 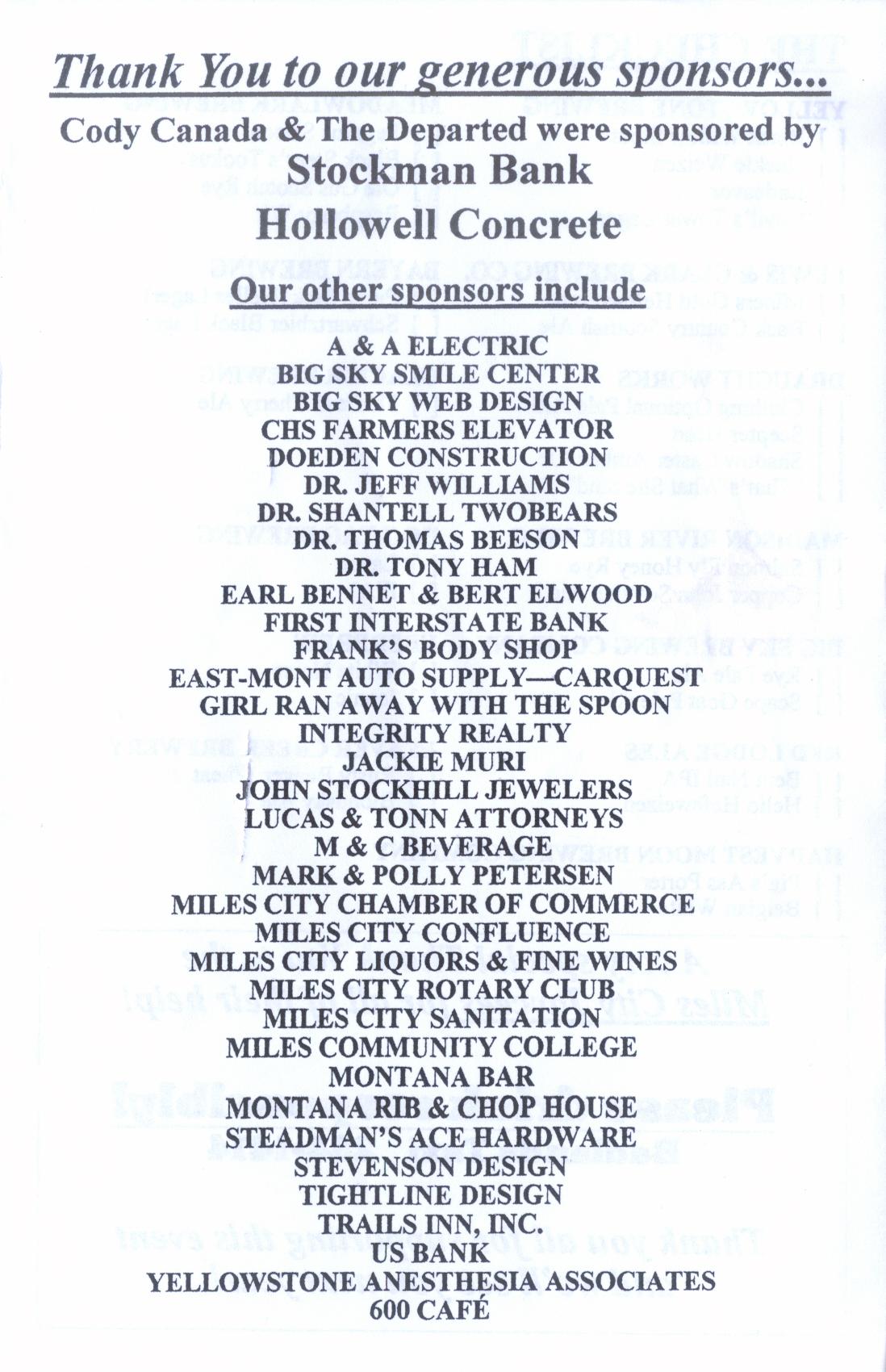 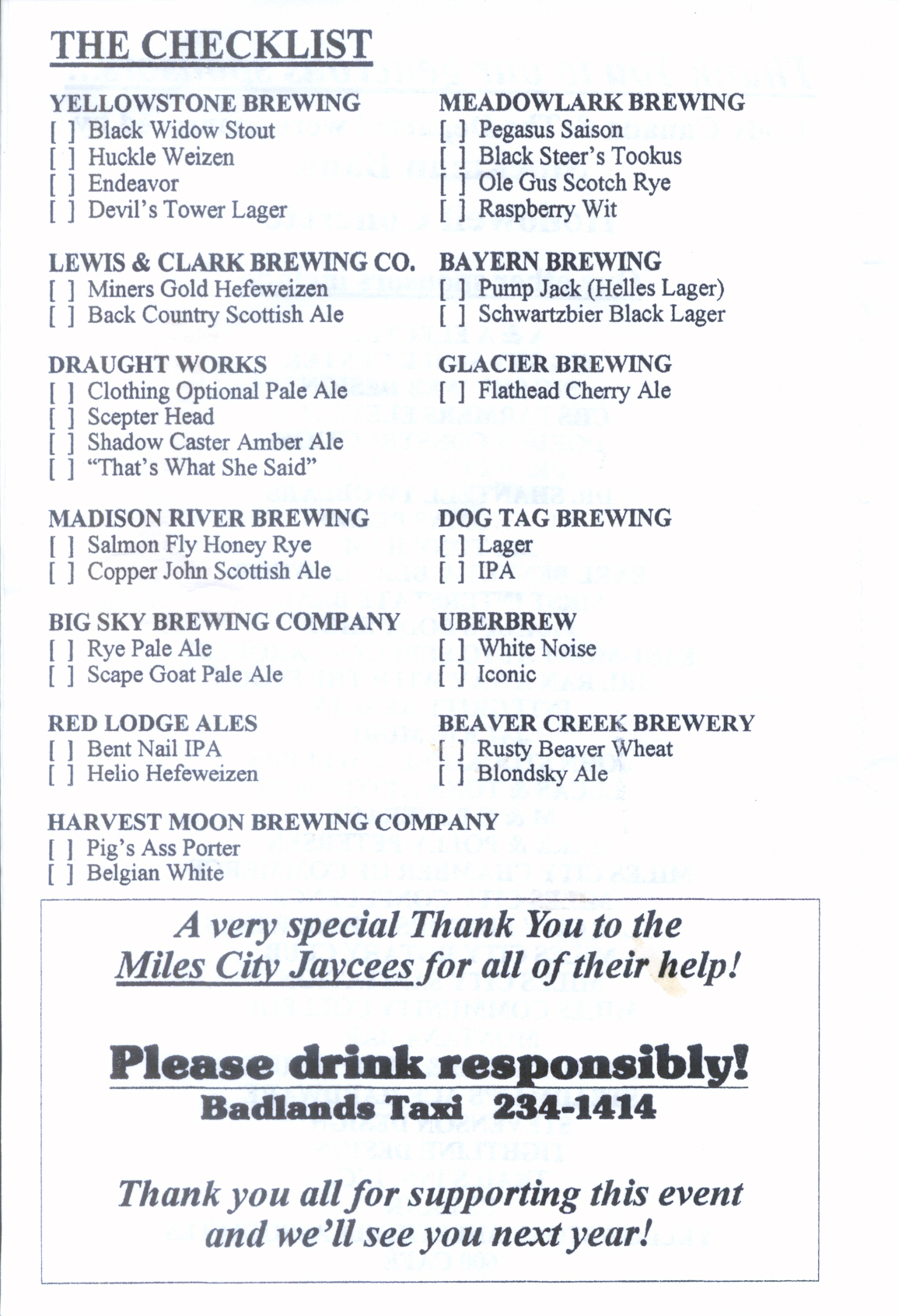 2015 Miles City Maltfest Guide Page 4
permalink
Top
+0
-0
founder
supporter
sponsor
A lot of those look a wee heavy for summer heat. Then again, I've got a particular fondness for Heavy Horse that's been deep chilled in a Yeti, outside temperature no matter.

permalink
Top
+0
-0
SPONSORED
moderator
founder
It's making me thirsty pondering the list, I know that much.

I have a Hop Valley Alphadelic in the fridge calling my name.... permalink
Top
+0
-0
Post new topic Reply to topic
Does this sound familiar to what happens in Miles?
Cross Country Race in Miles City