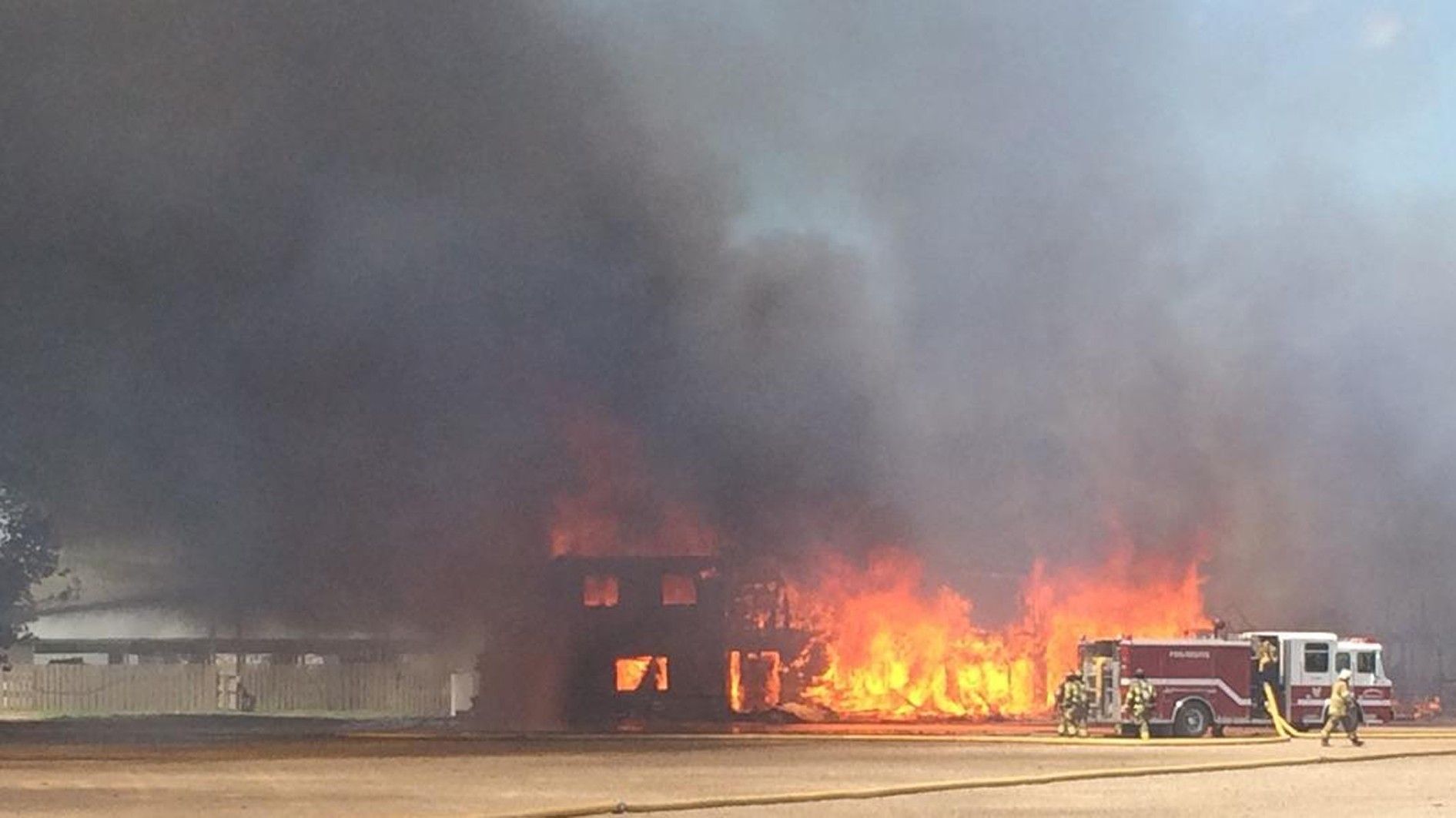 The Miles City Livestock Commission building burned to the ground on Saturday, with the loss estimated at more than $1 million.

Firefighters were called to the structure, located at 337 I-90 Business on the west end of town, just after noon, said Custer County Fire Chief Bud Peterson. When an alarm went off, one of the workers at the commission saw smoke coming out of the interior of the building, Peterson said.

A second caller, a half-minute later, could see flames coming through the window.

“This building was built in the early 1900s, so it’s really old and dry,” Peterson said. “By the time the engines arrived on scene, the building was totally engulfed. Then we got a little push of wind, which didn’t help anything.”

One firefighter was injured at the scene, Peterson said. The man was initially taken to Holy Rosary Hospital in Miles City and then transferred to a Billings hospital. His condition is unknown.

Peterson estimated the loss of the building at more than $1 million. He wasn’t certain whether it is insured. The cause of the blaze remains under investigation.

Reached Saturday evening, Miles City Livestock Commission Co. owner Bart Meged said he had no comment. A notice on the commission’s website read: “Due to unfortunate circumstances there will be no sale this Tuesday the 16th. We will be back on schedule the 23rd.”

The Miles City Livestock Commission Co. “is one of the oldest stockyards in this part of America,” according to the company’s website.

Originally it sold only horses, including thousands of military horses all around the world. Now, it sells all classes of livestock, with an emphasis on cattle.

The company built a new facility at its present location in 1950, the website said. Rob Fraser, Bart Meged and two other partners bought the auction in September 1991.

Fraser bought out the interests of all owners, except Meged, in 1995. In January 2015, Meged bought Fraser’s interest, and with his wife, Misty, became the sole owners.

Read more: http://billingsgazette.co...05f96.html
permalink
Top
+0
-0
See but the owner and several over people have said as well that no one injured, i hope not but if so i hope for a speedy recovery
permalink
Top
+0
-0
founder
supporter
The stockyards were built in the late forties and early fifties, after World War II. Maybe to the young folks that is 'early twentieth century' but, to me, it's mid-century. Minor detail.
permalink
Top
+1
-0
supporter
Very surprised there was not more coverage and photos in the Miles City Star. I appreciated the coverage by the Billings Gazette including the article and photos. I am glad the article and photos were posted in this thread. All folks in town do not take the Billings Gazette, and many do not read miles city.com. I would rather read a more complete article with photos, even if there is a glitch in a date.
permalink
Top
+0
-0
Did they figure out what started it?
permalink
Top
+0
-0
The cause of the fire remains under investigation. KATL Radio will have more information at 530PM in our Local News. And be sure to stay with us for continuing coverage.
permalink
Top
+2
-0
The fire at the Miles City Livestock Commission has been ruled accidental. Due to the extensive damage, the exact cause of the fire is undetermined.
permalink
Top
+1
-0
Yes, I heard this press release on YPR and the announcer understandably stumbled aloud as she read it; as if to say, "How is it possible to conclude that the fire was accidental if the cause remains unknown?"

I wonder if the fire investigators understood how boneheaded their statement would sound.
permalink
Top
+0
-0
SPONSORED
founder
supporter
The was NO evidence of any intentional fire being set. If it wasn't intentional, it was an accident.

It appeared to be electrical in origin but the fire was so extensive, they were unable to determine exactly which outlet burned first. They can guess but can't pinpoint.
permalink
Top
+0
-0
Post new topic Reply to topic
Hard Road Trio Thursday at Tongue River Winery
2015 Knights of Columbus Badlands Bowl