Can hardly wait to see who all Shipley sues for doing this without city authority.

People making a big deal out of this. Have you seen the rest of Miles City? Just accept that you live in a dusty, old cow town and that no matter how much you try, you can't polish a turd. This guy's house is the perfect representation of a city that is going nowhere, in the middle of nowhere. You have a town full of people that are excited for a Dollar Tree for crying out loud, but hey, you've got class.
permalink
Top
+0
-0
supporter
sponsor
Seriously? There's a Dollar Tree in town?
permalink
Top
+0
-0
Yup, you stay classy Miles City.
permalink
Top
+0
-0
moderator
founder
I believe "Dogpatch" is the correct term, "Quag".
permalink
Top
+0
-0
founder
supporter
Are you a "Mythbusters" fan? Turd-polishing is easy and works great!

permalink
Top
+0
-0
supporter
My beloved wife prefers the term that was spray painted on the Old Holy Rosary hospital that was torn down several years ago... 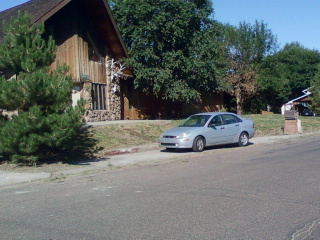 Cleanup completed. by dave_mcmt, on Flickr
permalink
Top
+0
-0
supporter
Upon returning to Montana for a visit after 30 years and seeing some of his old friends, the author, John Hutchens wrote in his book, “One Man’s Montana”, (1964) “Time seemed scarcely to have touched these old friends. Was it because, whether still in harness or relaxing, they regarded life as something to be lived and loved rather than as a contest for place and gain”?

This "Bit" from the book reminded me of Miles City. Some very fine people in this town:-)
permalink
Top
+0
-0
Wendy,
Please read the post from the city attorney:

The City of Miles City has a Court Order to conduct cleanup at Mr. Shipley's residence.

The matter is no longer within Mr. Shipley's control, as the property has been deemed a public nuisance by the City Court, where Mr. Shipley was convicted previously. Shipley failed to clean up the property within the specified time frame (December of last year), and the Court revoked Shipley's suspended sentence this past Tuesday for such failure to clean up. He has been sentenced to 90 days in jail, and the City has been given court ordered authorization to conduct cleanup efforts in a very specific manner.

I would strongly urge you all to not take any action on Shipley's property without prior approval of the Court.

The City had a verbal order at Court last Tuesday for cleanup authority. The City has not yet received the Court's written order (unless I just haven't seen it yet today) and could not take action until that order was issued.

Although it is my opinion that the cleanup authority had been given to the City (pending the written order), the City has no intention of challenging the cleanup conducted with apparent authority from Mr. Shipley.

Again, the City was not associated with the cleanup in any way. That said, it appears that the City will have little to nothing left to do upon issuance of the written order.

It was not my intent to undermine the cleanup effort - rather, it was my intent to ensure that it was extremely clear that the City was not a participant in the cleanup (as it was widely assumed that the City was involved), and that the City is still waiting on the written court order prior to taking or condoning any action.
permalink
Top
+0
-0
There are so many yards around town that look really bad, weeds 2 ft. tall and growing, where is the city pride? I have a junk yard next to me and a real mess, no one says a word. There is no zoning, no compliance office, it is do as you please. Where are the city fathers? Doesn't any one care!
permalink
Top
+0
-0
Shipley's place was a mess, thats for sure, but you are right. Right across the pasture from where I live, one guy pulls his old vehicles in the back yard and they just rust away. Another looks Just like Ships. No pride or consideration for their neighbors. This town could sure use a major clean up.
permalink
Top
+0
-0
Shipley was selectively prosecuted because he lives on the road to the golf course. The rest of you will have to live with the junk because only a few residents who live in the area will complain.

That being the case, I expect the City will be hearing from Ship when he gets out of crowbar hotel. Why else would D. Rice be posting 20 times that the City had nothing to do with the action on the property. He's doing damage control.

Perhaps Ship will use the money he saved on the bill the City would have sent him, to hire a competent attorney instead of resorting to the fool he has employed in the past.
permalink
Top
+0
-0
moderator
founder
Shipley's was a pretty egregious case. At one point I observed debris from his property spilling into the public street.

His new motto might be, "I fought the law and the law won."

Rob might want to consider a move to Terry. "Sam Colt" would welcome him with open arms, I'm sure.
permalink
Top
+0
-0
supporter
Is Rob paying for his time in jail, or the taxpayers? He could be teaching others in jail how to represent themselves. When he gets out is he going to start his mess again. Some people are addicted to junk and resist anyone who gets in the way. I doubt this issue has been resolved.
permalink
Top
+0
-0
supporter
I was told that the house was sold. Is this true?
permalink
Top
+0
-0
supporter
All I can say is that for all of Miles City's talk about coming out of the darkness and raising mental illness awareness... Oh... wait... its just to prevent suicide so that the mentally ill can grow up to be public nuisances like Mr. Shipley. If they are really lucky they will have property near the golf course which allows "fine upstanding concerned citizens" to lay waste to all that means anything to them. I hope you have deep pockets concerned citizens, because if he decides to play his cards right you might have to hit the bottoms of them.
permalink
Top
+0
-0
moderator
founder
Jonna, the house was said to be under foreclosure for nonpayment of a loan as reported in the Miles City Star. What do you think would have happened to the house and all that stuff once the bank foreclosed on the property?

Jonna, how would you have handled this differently?

Miles City Star wrote:
"As for the trustee’s sale, Recontrust Company postponed today’s sale without stating a reason. The company handles the foreclosure process for lenders, and was handling the case for Bank of America.

The sale was to take place at the Custer County Courthouse. The sale was originally set for Nov. 30, 2012, but that date also was postponed.

According to a legal notice that appeared in the Miles City Star in 2012, the sale is the result of a default in the payment of a monthly installment that became due April 1 of 2012.

The notice said the lender is owed the unpaid principal balance of $65,051.29, along with the 7.75 percent interest, plus other fees and charges."

permalink
Top
+0
-0
supporter
Ask him if he would be agreeable to a yard sale so that he could at least recoup some of his losses? He should have a legal advocate for him to relay what items were most valuable to him sentimentally, he should also have a mental health advocate to mediate between him and the city so his rights aren't violated.

Instead of constantly antagonizing him as a nuisance try to find a mutually agreeable arrangement to resolve the issue once it became clear to him via the advocate that he had no choice but to address the issue.

As has been stated several times by others, he still had time while the "city" (not the citizens) made decisions and arrangements to deal with the issue.
permalink
Top
+0
-0
moderator
founder
Have you missed the point that the people who cleaned up his yard did so at his and his legal counsel's direction?
permalink
Top
+0
-0
supporter

He could be teaching others in jail how to represent themselves.

Everyone involved is absolutely sure Rob's signing off on "permission" to go onto his property, remove his stuff, outside of the jurisdiction of the City is totally going to be cool in 90 days? Everybody feels legally protected for their role in things?

There's no chance Rob could pull a 180 or have a bad reaction coming back home to this?

Nobody is worried about him maybe... going off the deep end sideways on people, right?

[This message has been edited by Dan Mowry (8/1/2014)]
permalink
Top
+0
-0
Now...we all know how much a piece of paper means to people right? Ask all the people who had restraining orders and still got hurt. I agree that it was needed. But I also don't believe it will be without consequence. After 90 days in jail I can't imagine Rob Shipley being really happy with anything.
permalink
Top
+0
-0
Sad to see the piles already beginning to spill outside again....that was short lived. Sorry for all the effort people made but I guess if he never got the mental help he needed the problem never was really fixed
permalink
Top
+0
-0
Yes, the junk/garbage is piling up again, and it sickens me, because I live across the street and have to look at it every day.

Shipley is sick and the court should've ordered mental counseling to get his hoarding cleaned up and under control, not a jail cell.

[This message has been edited by Elaine Nichols (10/12/2014)]
permalink
Top
+0
-0
There's a class that teaches retail and service workers to not serve drunk customers. When I saw the white limo at the pawn shop, the thought that came to my mind is the pawn shop workers should not sell to a known hoarder.
permalink
Top
+0
-0
supporter
The mayor should step in immediately to get this build up stopped.It will probably require another arrest and trial to force him in to some kind of action
permalink
Top
+0
-0
Have you checked out the used car lot on the Mayor's property?
permalink
Top
+0
-0
Hoarding is a mental illness. You don't fix it by hauling away the junk. It will continue and probably get just as bad unless Rob Shipley gets mental health care. And unfortunately, unless he is a danger to himself or others, he can do what he wants.
permalink
Top
+0
-0
moderator
founder
Rob should consider creating "Shipley's One of a Kind in the World Museum" (inside a building someplace, of course) and put his energy toward a productive cause.

I'm saddened to learn that Marvin Carr has passed away and his "One of Kind in the World Museum" auctioned off. He gave us a personal tour of his museum once and let me sit in the back of "The Great One's" Lincoln Continental limousine. No, not Wayne Gretzky... Jackie Gleason. Marvin seemed to have a passion for Lincolns (hint hint).

Spokane Spokesman-Review: Marvin Carr’s One of a Kind in the World Museum wares auctioned
permalink
Top
+0
-0
SPONSORED
supporter
What a great article, David. The squirrel drinking and netting $500 is pretty darn good. The Lincoln sounds wonderful and what a buy. Mr. Carr must have seen value in his possessions or, just simply enjoyed them.
permalink
Top
+0
-0
Post new topic Reply to topic
MCC is looking for Nursing Graduate Pictures
MCFR Firefighters @ the Library 10/14