People and Perspectives from Miles City's past

SEATTLE - Rufus Cho-
ate who is moving his ranch
operations from Miles City,
Montana to Unalaska, near
the end of Alaska's Aleutian
Islands chain, loaded 500
sheep on his little freighter.
The sheep were shipped to
Seattle by truck and loaded
into the hold of Choate's
96-foot freighter. Besides
the sheep, the Montana
rancher plans to take along
eight horses, a dog, a cat, a
hive of bees, some chickens
and some rabbits.[/f]
permalink
Top
+0
-0
SPONSORED
moderator
founder
Rufus died of a heart attack on May 16, 1966:

SEATTLE (AP) -- A "for Sale" sign went up Wednesday on the Robert Eugene, the ancient 98-foot boat that carried a Montana family to a new life in the Aleutians 27 months ago. Alice Choate, widow of the man who established a 268,000-acre sheep and cattle ranch on Unalaska Island, sailed here with her youngest son Ted, 12, to sell the old freighter. Carl Flory of Unalaska, a former tugboat skipper, was helmsman. "It's sort of like selling your home, but it has to be," she said. "Rufe had planned to get rid of the Robert Eugene, anyway, before he died." Rufus Choate, 53, died of a heart attack May 16, but his wife and four children decided to stay on the windy, storm swept island to finish what he started. Choate always called the 76-year-old boat his "ark." When the Choate family sailed for Unalaska in 1964 the Robert Eugene was stuffed with cattle, sheep, pigs, chickens and other animals for the wilderness homestead. Several times that summer Choate made the two-week voyage back for more livestock and for a year his family lived in the boat until they could repair an abandoned Army postoffice for their ranch home. The Choates left a 6,000-acre ranch near Miles City, Mont., "because it was getting too crowded."
permalink
Top
+0
-0
founder
supporter
Sad. I rarely find out the 'rest of the story.' Wonder what happened to the family?
permalink
Top
+0
-0
I knew Rufus and his family and recall their departure. I always wonder about the project and many years later (1986 to be exact) went to Unalaska and realized that it held little hope for success due to the harsh conditions and weather.
permalink
Top
+0
-0
moderator
founder
Check this out. According to a comment on this photo page:

"According to the Last Resort FD's SFD history page: 'Sold in 1936. Converted to freighter & name changed to Robert Eugene. Used to ferry supplies to sheep ranch on Aleutian Islands. Accidentally burned and sank at Kodiak Alaska in early 70's.'" 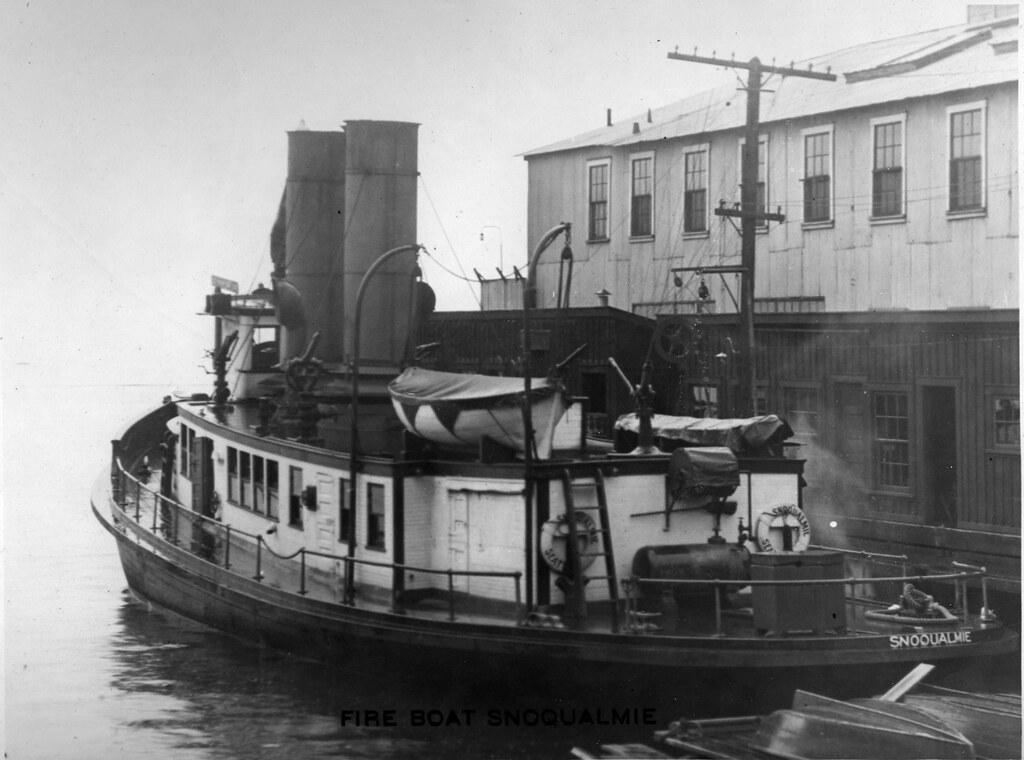 Fireboat Snoqualmie, 1920 by Seattle Municipal Archives, on Flickr
permalink
Top
+0
-0
moderator
founder
I don't know what that boat looked like after it was converted to a freighter but 500 sheep, 8 (?) horses, and a family of 5 (?) crammed onto that for a journey from Seattle to the Aleutian Islands sounds pretty damn crazy to me.
permalink
Top
+0
-0
Hello,
I am Kristal Graham, My mother was Susan Choate, Rufus Daughter.
I am his Granddaughter I never met him but I do know that he passed away after the move from a heart issue. His wife Alice worked for the city for several years before moving to California to help my mom raise me. Alice passed away in 1991. Susan Passed away in 2000. Ted Passed away in 1993 or about. The last brother Jim I do not know. I hope this helps some.
Kristal
permalink   ·  vote tally
Top
+4
-0
founder
supporter
I searched the Alaska shipwreck registry for the Robert Eugene. I even narrowed it down to Kodiak island. I decided, I wouldn't live long enough to look through them all. Apparently, Alaskan waters are not friendly for shipping.

This is an interesting story, The vessel appears to be a coal burner. Unless it was converted that would leave even less space. Based on my experience and from the photo David Schott posted this round bottomed, beast would be a rolling, miserable ride even in light seas. Rufus was one tough SOB or listing a tad to the port in the brain department. Still an admirable, if not, ill advised undertaking.
permalink
Top
+0
-0
founder
supporter
sponsor

From Dave's link above- http://www.lastresortfd.o...Snoqualmie

This was a significant rebuild I think. Doesn't mean I'd want to ride along w/ 500 sheep-
permalink   ·  vote tally
Top
+1
-0
moderator
founder
permalink
Top
+0
-0
I also remember the Choates,although they left when I was just a kid.I never heard Rufus called that,it was always Rufe.Yes,he was one tough SOB,but also a real character.The Choate place was in the Stacy community,right next to the Custer National Forest.They liked in a wonderful two story rock house.There were outlying cabins because they had a dude ranch for a while.They sold the ranch to Gary and Chloe Wiltse.
There are many stories about Rufe.Like all legend/folklore stories,they may be true,partially true or complete fabrication but they are surely entertaining.I do know for certain that Rufe had a still hidden under a granary he was supposedly building because I've been down in it.Rufe had a ranch hand from back east who doubled as a moonshiner.Unfortunately the ranch hand got stopped in Miles City for drunk driving and there was all the fixins' for shine in his vehicle.The Gmen found the still and demolished it.
Rufe had an airplane.He lost his pilots license when he was called in for flying under the Yellowstone bridge.Once Art Kolka was farming in a field and Rufe buzzed Art's tractor low enough to tear the exhaust stack off.Another time Rufe was giving a nighttime airplane ride to Gillette to a wino he had met in a Broadus Bar. They were following the hiway and ran out of fuel.Legend has it that Rufe landed his plane on the hiway in front of one of Charley Stabios trucks.Someone came along,they pumped some gas into the plane and off Rufe went,this time with no passenger.
permalink
Top
+0
-0
SPONSORED
supporter
Wilste's lived just up the road from us - the rock house is sadly no more, as it burned in the big fire here about 5 years ago.
permalink
Top
+0
-0
Post new topic Reply to topic
New Star Wars Movie
Trump vs. Bannon.