Naturally the lions wanted to get to what was inside, but the jar was quite tightly sealed.

You know how the lions finally get the jar unsealed?


They pride it off.
permalink
Top
+0
-0
SPONSORED
supporter
One day a number of Eastern European men managed to get themselves thoroughly drunk. They then decided a visit to the local zoo was in order. While staggering through the zoo, they came to the lion's enclosure. 'I'm really chummy with the lions' one of the men proclaimed. 'I'll show you just how chummy I am.', said the man as he crawled into the lion enclosure. In the enclosure, a big he-lion was just waking up from his nap. After all, it was just about feeding time. But what's this? Dinner crawling over the fence!

So, the lion ate the man right then and there. Of course, this did not go unnoticed, and soon the media descended on the zoo in droves. Reporters wandered everywhere. News trucks and satellite trucks were fighting for space outside the gate. In general, mayhem reigned. So, the head zookeeper, after carefully ascertaining the true story, called a press conference. After quieting everyone down, he started to say, 'I have called this conference to set straight the facts in this remarkable incident. The first fact that I want to make clear is that the Czech is indeed in the male.'
permalink
Top
+0
-0
An enterprising zookeeper would cash in on all of the extra activity by forcing all of the reporters to assemble in an orderly manner at the gate, where he could assess his surcharge. You know............ 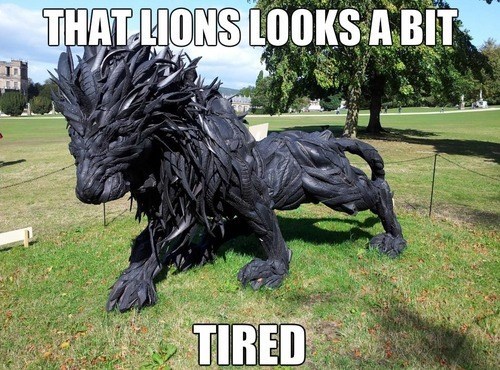 permalink
Top
+0
-0
supporter
Who publishes a joke picture with a typo?

permalink
Top
+0
-0
supporter
Punsters who believe that you should have more than one laugh a day.