Yet a new study conducted by Media Matters for America shows that in stories about the 2013 IPCC report, rather than accurately reflect this expert consensus, certain media outlets have created a false perception of discord amongst climate scientists.

Specifically, politically conservative news outlets like Rupert Murdoch's Fox News and the Wall Street Journal were responsible for the lion's share of the false balance, disproportionately representing climate contrarians in their stories about the IPCC report. 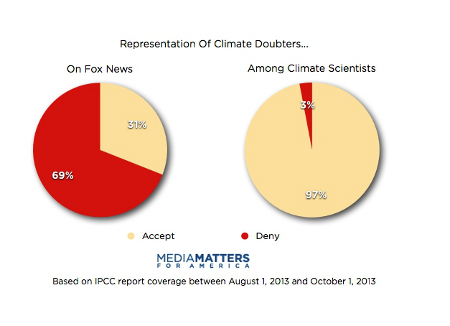 The Media Matters study focused on American news outlets, but similar patterns have been observed in other international media markets. Mat Hope at Carbon Brief reviewed UK media coverage of the IPCC report. Based on the IPCC story headlines he compiled, the politically conservative Times, Daily Mail, and Telegraph gave climate contrarian views disproportionate coverage, unlike The Guardian, Observer, and Independent. Rupert Murdoch's The Australian also heavily featured climate contrarians in its climate stories leading up to the 2013 IPCC report.

Because there are so few climate scientist contrarians to choose from, most of the guests casting doubt on human-caused global warming and the IPCC report were not climate scientists. It's important to remember that the scientific evidence has no political bias, which suggests that the disproportionate representation of climate contrarians is a result of the political biases in the media outlets themselves. 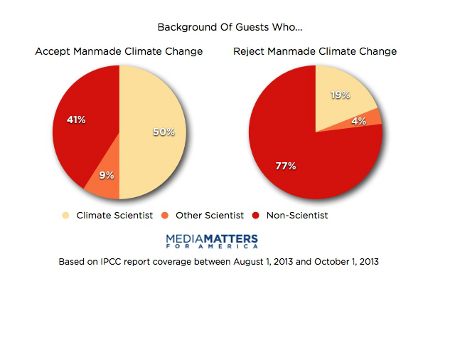 The 19 percent of guests classified as 'climate scientists' in the above graphic is also very generous to the conservative American media outlets. The 19 percent is comprised of Judith Curry, Willie Soon (who has received $1m from coal and oil industry interests since 2001), and Anthony Tsonis (whose research on ocean cycles is entirely consistent with human-caused global warming, but whose views Fox News portrayed inaccurately).

This practice is known as "false balance," where the 3 percent of climate contrarians are given a disproportionate amount of media coverage, creating the perception that there is a significant divide amongst climate experts. In their purported efforts to be "fair and balanced" and represent "both sides," these media outlets are actually creating an unbalanced perception of reality. The reality is that 97 percent of climate experts and evidence support human-caused global warming. The findings in the IPCC report are consistent with that expert consensus, as we would expect, since the IPCC report is simply a summary of the body of scientific research.

http://www.theguardian.co...c-coverage
permalink
Top
+0
-0
SPONSORED
Most people that care either believe man causes GW, or man does not cause GW. You can read reports from "experts" on both sides that support their own stance.
Why don't the people that think man causes GW admit that one volcano eruption causes more damage than man could ever cause.
Also please explain why the temp. has been going down for the last dozen years.
I am old enough to remember the threat of the earth freezing to death. This will be an issue as long as scientists need an income.
permalink
Top
+0
-0
supporter
What stupid idiots those dadgum scientists are. Back in my day, the ice was only 24 inches thick. And that was before global warming!

Nowadays its only 12 inches thick.And we still drive our pickups out on it, to try to catch the fish that don't live there no more. Take that, global warming!
permalink
Top
+0
-0
supporter
Getting stoned with a hooker, Gunnar? (Not judging your response, judging your location.)

[This message has been edited by Buck Showalter (10/21/2013)]
permalink
Top
+0
-0
supporter
There is a new book out about Rupert Murdoch and how he controls his 'news' outlets. HINT: If Murdoch owns it, be very, very careful.
permalink
Top
+0
-0
supporter
Unfortunately, no coffee shops for me, Buck. First day in Amsterdam, I came down with a cold, and just thought of inhaling smoke sends me off on a coughing fit.

I did walk over to visit the Oude Kerk yesterday. Built in the 1300s, it is the oldest church in the city. It is pretty odd, though, to see prostitutes dancing in windows just across the street from a church.
permalink
Top
+0
-0
supporter
I am so jealous of you right now. I love Amsterdam! I hope you feel well soon so that you can enjoy yourself.
permalink
Top
+0
-0
Gunnar, gargle with hot salt water. And take a decongestant before you fly back. Love, Mom
permalink
Top
+0
-0
supporter
Thanks Mom. And Wendy, I have felt plenty good enough this past week to be enjoying myself. Van Gogh museum, Rembrandt house, delicious beer, canals, architecture, etc.

Ian Rutherford Plimer is an Australian geologist,
professor emeritus of earth sciences at the University
of Melbourne, professor of mining geology at the University of Adelaide, and
the director of multiple mineral exploration and mining companies. He has
published 130 scientific papers, six books and edited the Encyclopedia of Geology.

Professor Ian Plimer could not have said it better!
If you've read his book you will agree, this is a good summary.

PLIMER:
"Okay, here's the bombshell. The volcanic eruption in Iceland .
Since its first spewing of volcanic ash has, in just FOUR DAYS, NEGATED EVERY
SINGLE EFFORT you have made in the past five years to control CO2 emissions
on our planet - all of you. Of course, you know about this evil carbon dioxide that we are trying to suppress - it’s that vital chemical compound that every plant requires to
live and grow and to synthesize into oxygen for us humans and all animal life.

I know....it's very disheartening to realize that all of the carbon emission savings you have accomplished while suffering the inconvenience and expense of driving Prius hybrids, buying fabric grocery bags, sitting up till midnight to finish your kids "The Green Revolution" science project, throwing out all of your non-green cleaning supplies, using only two squares of toilet paper, putting a brick in your toilet tank reservoir,
selling your SUV and speedboat, vacationing at home instead of abroad, nearly getting hit every day on your bicycle, replacing all of your 50 cent light bulbs with $10.00 light bulbs.....well, all of those things you have done have all gone down the tubes in just four days

The volcanic ash emitted into the Earth's atmosphere in just four days - yes,
FOUR DAYS - by that volcano in Iceland has totally erased every single effort
you have made to reduce the evil beast, carbon. And there are around 200
active volcanoes on the planet spewing out this crud at any one time - EVERY DAY.

I don't really want to rain on your parade too much, but I should mention that when the volcano Mt Pinatubo erupted in the Philippines in 1991, it spewed out more greenhouse gases into the atmosphere than the entire human race had emitted in all its years on earth.

Yes, folks, Mt Pinatubo was active for over One year - think about it.

Of course, I shouldn't spoil this 'touchy-feely tree-hugging' moment and mention
the effect of solar and cosmic activity and the well-recognized 800-year
global heating and cooling cycle, which keeps happening despite our
completely insignificant efforts to affect climate change.

And I do wish I had a silver lining to this volcanic ash cloud, but the fact of the
matter is that the bush fire season across the western USA and Australia this year alone will negate your efforts to reduce carbon in our world for the next two to three years. And it happens every year. Just remember that your government just tried to impose a whopping carbon tax on you, on the basis of the bogus 'human-caused' climate-change scenario.

Hey, isn’t it interesting how they don’t mention 'Global Warming' anymore, but just 'Climate Change' - you know why? It’s because the planet has COOLED by 0.7 degrees in the past century and these global warming bull artists got caught with their pants down.

And, just keep in mind that you might yet have an Emissions Trading Scheme - that
whopping new tax - imposed on you that will achieve absolutely nothing except
make you poorer. It won’t stop any volcanoes from erupting, that’s for sure.

But, hey, relax......give the world a hug and have a nice day!"
permalink
Top
+0
-0
SPONSORED
supporter
That was interesting, TOMM. Have you read, "Becoming Dinosaurs" by David Trexler of Bynum, MT. Quite a good read.
permalink
Top
+0
-0
Post new topic Reply to topic
Daycare openings
Obamacare Vs Milescity.com