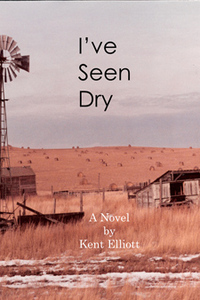 Kent Elliott, who was pastor of Highland Park Church (now United Christian Church) in the 1980's, will sign copies of his novel:

He'll have copies to sign and sell (at $15.00) beginning with a short reading from the book.

I've Seen Dry is a historical novel that reaches back from 1981 small town life in eastern Montana, to an event in 1918 as remembered by two elderly nursing home residents. Something happened along the North Dakota - Montana border in 1918. A man died then. The crisis left something that would influence the way of life in the rural community sixty years later.


This, Mr. Elliott's first novel, was published independently in April and is receiving high praise from readers.
 "It kept me reading until midnight and I had to work early the next morning."
 "That was really a great story," said with surprise in his voice by one who thought he had bought the book merely as a courtesy to his recently retired pastor turned novelist.
 "Read it.... loved it.... can't wait for the movie!!!"