The anti-NDAA movement continues to gain traction. There is still much more work to be done as part ofOperation Homeland Liberty, but People's Blog for The Constitution highlights the latest development we can add to the victory column in Montana's step toward resisting federal intrusion.
By a vote of 20-0, a bill that bans cooperation with federal agents over the National Defense Authorization Act (NDAA) has just passed the Montana House Judiciary Committee. Known as HB 522, the bill would also require the state's attorney general to report any attempts by federal officials who try to enforce the NDAA. HB 522 is now one step closer to becoming law.

Additional details below with contact information for Montana legislators..

Introduced by freshman Republican state Rep. Nicholas Schwaderer, the bill has gathered over 20 Democratic and Republican cosponsors in the House, including the Speaker Pro Tempore Austin Knudsen and the chair of the Judiciary committee, Krayton Kerns.

Speaking at a committee hearing on Wednesday, Schwaderer articulated why he opposes the NDAA and indefinite detention: "There's a lot of us on both sides of the aisle that feels that this flies in the face of habeas corpus and a free society and the better part of a millennium of human progress." 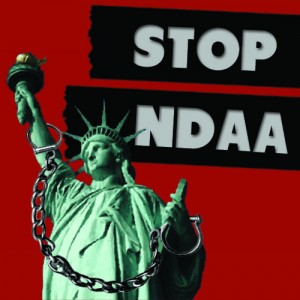 The Montana Sheriffs and Peace Officers Association will not infringe on the right to bear arms, the organization said in a statement Tuesday.

Gallatin County Sheriff Brian Gootkin, who is the organization's first vice president, sent the prepared statement, saying the association opposes any legislation that takes away constitutional protections, including gun rights, from law-abiding citizens.

http://www.washingtonsblo...ution.html
permalink
Top
+0
-0
supporter
they just introduced a new law allowing corporations to vote in municipalities in Montana...No kidding...was just proposed...if that passes we will be one of the first states to descent into fascism...it is getting really scary...IMO

[This message has been edited by howdy (2/22/2013)]
permalink
Top
+0
-0
supporter
I nominate Krayton Kerns as the biggest dumbass in the legislature.

I think he wins, hands down. Any others?
permalink
Top
+0
-0
supporter
Do you want the whole list of ALEC and ATR (Norquist Pledge signers)? House Bill 486 that Howdy mentions is presented by ALEC member S. Lavin. Essman is beholden to ALEC along with many others. K. Kerns is a Pledge signer...they are all beholden to the Corporations. The bills are designed by the ALEC Corporate Bill Mill and their "stooges" present them to the Legislature. If you notice, the same bills are often being debated in other states as well.

I checked www.sourcewatch.org tonight and saw where several States have had their members quit ALEC...but, not Montana. It is saturated and I think our only hope is the Governor. Also, 38 Corporations have pulled out. We have been so gullible that it makes me sick.
permalink
Top
+0
-0
supporter
Sadly, valtrex won't cure us of Cheryl.
permalink
Top
+0
-0
Do you all realize that if a sherif refuses to help federal agents, he or she is guilty of being an accessory to the original offense and subject to arrest and imprisonment no matter the state laws involved? Passing stupid laws makes no difference and will have no effect, just makes stupid leg feel and sound better to stupid voters so they get re-elected.
permalink
Top
+0
-0
Do you realize that the Sheriff in any county in any state is the senior law officer in that county. He is even senior to any federal agent. He has also sworn under oath to uphold the constitution and when the federal agents are trying to enforce something that goes against the constitution, the sheriff must uphold the constitution. To change the constitution would require a bill passed by congress and then ratified by three fourths of our 50 states. And yes it can be done without the president or his signature......korkyII
permalink
Top
+0
-0
founder
supporter
Seriously, you people really have no clue what you are talking about. I know that the Rush Windbags and Faux News and Tea Bag folks spout this stuff but they are making it up. States are "lower" than the federal government. That's why laws are appealed to the Supreme Court of the United States of America, not from one state to another.

I am so tired of you unpatriotic, anti-American people saying terrible things about the country I love. If you don't like the United States, why not move somewhere else? I believe in the Constitution and the law of this land and will uphold it rather than treat it with contempt, the way some people do. I can only hope the law enforcement officers around me are as loyal and patriotic to the United States of America as I am.
permalink
Top
+0
-0
Amorette, you are wrong. The sheriff in any county is the senior law enforcement officer in that county. The Feds challenged this a number of years ago in wyoming and lost the case. It was upheld by the U.S. Supreme court. Why do you think the Feds are not all over Colorado right now on their legalization of MJ ? Possession of MJ is against federal law. States Sovereinty....korkyII
permalink
Top
+0
-0
You are the one calling names and making accusations. I don'nt understand why Liberals have to resort to name calling and being so vindictive. I am more patriotic than you will ever know, and I know I am darn sure more patriotic than you are. Just because we don't agree on some things doesn't make either one of us unpatriotic....korkyII
permalink
Top
+0
-0
The law enforcement officers are as patriotic as you and they will uphold the constitution of the U.S. even when it disagrees with the Federal Government....korkyII
permalink
Top
+0
-0
supporter
Cite or it didn't happen.
permalink
Top
+0
-0
Broom Ryder ... like I said before you are a fraud!

You are the anti-American ... just like the OPC/CIA newspaper ... you work for the Vatican ... not the people of America.

SATAN is the power behind the governments of every country in the world. The American people fund this evil because of sheeples like you who do not report the TRUTH.

Religion is of SATAN.
Education is control by SATAN
Media is a deception of SATAN
Wall Street SATAN's BEAST!
Corrupted Court Houses are of SATAN

The Tax Base of Custer County is chemically poisoned by bacteria of slime and fungus which sufficates and poisons its prey.

What makes the world go around?

SATAN Prince of the Power of the Skies has been god of planet earth for the last 6000 years. Through religion media education and $money he has corrupted and disconnected mankind from the GOD MIND?

Black Mold to you Broom Ryder

Cactus Plains
permalink
Top
+0
-0
Bridgier, When a peace officer is sworn in they swear to uphold the constitution, not the federal gov't.
permalink
Top
+0
-0
founder
supporter
So, how do you know that any further laws will be unconstitutional? Your personal opinion? I was under the impression it required a ruling by the Supreme Court of the United States of America to determine what does and does not pass constitutional muster. If anyone can pick and chose what is and is not 'constituional,' we would have chaos.

Can you wait for a ruling as is legal and CONSTITUTIONAL or do you just run off in hysterics on the assumption of something, in your personal and non-legal opinion, is one thing or the other?
permalink
Top
+0
-0
supporter
I'll NEVER live to be 1/2 as smart as korky II

BUT ~ in reference to the power of state (sheriff) law enforcement having jurisdiction over the Feds..where the hey were was the sheriff dept when the marijuana busts took place

The plan for individual states to counteract fedral laws was proven to be not such a good idea, to me, in the Flor case..
permalink
Top
+0
-0
Duffy, federal laws are not supposed to go against the constitution and when they do the constitution will be upheld. As it is right now any federal marshal etc coming into the jurisdiction of a county sheriff is supposed to contact the county sheriff pertaining to their business. If it is constitutional the sheriff usually accompanies the feds. There is no friction between the sheriff and the feds. If you don't believe me go ask our sheriff.
permalink
Top
+0
-0
supporter

And how does a sherrif figure this out? Does he just call up his tea-party buddies and ask them, or is there some sort of mechanism at the federal level to determine what is or isn't constitutional?

It's just so confusing.
permalink
Top
+0
-0
supporter
The purpose of the US Supreme Court and lower courts is to determine if any ruling is against our US Constitution...it is that simplistic...nothing can be adjudged higher than our US Constitution...Read it and weep tea baggers...
permalink
Top
+0
-0
Howdy If you even had a clue of what ur talking about you might be dangerous, however you don't so I'm just going to consider anything you say as garbage and leave it at that. Not even going to answer you from here on out....korkyII
permalink
Top
+0
-0
The supreme court or any other court only makes a ruling when there is a difference of opinion as to what any part of the constitution means. Outside of that the meanining of the constitution is not that hard to understand. Same with the Declaration of Independence. It's your liberal ncohorts in congress and the white house that keep wanting to deviate from the constitution and if you can't see that you are all blind....korkyII
permalink
Top
+0
-0
admin
moderator
founder
Uh, the Declaration of Independence is not law. And when a court evaluates whatever it does, it doesn't look directly to the Constitution (a fluid document designed to adapt with society). They go by intent and look to the latest interpretations and such for clarification. Then add their own 2 cents worth, if necessary.
permalink
Top
+0
-0
founder
supporter
The point is, no one individual can just decide something is or isn't "constitutional.' If we did, then everyone could have their own personal version of the law. There has to be a law of the land, not just a bunch of folks with an ax to grind.

If the Supreme Court makes a decision--which it hasn't because no laws have been written, passed or appealed--then we should abide by it.

Until then, county sheriffs have no business making decisions on the finer points of law. That is NOT their job. Enforcing laws that others interpret is.
permalink
Top
+0
-0
SPONSORED
supporter
Thanks webmaster for clarifying that for me...well said...I always find the rulings of the Supremes interesting as they reference the Constitution and how it might apply to whatever law they are judging...Obama was a Constitutional scholar, I think, which is a good thing as well IMO...
permalink
Top
+0
-0
Post new topic Reply to topic
This forums stance on guns
the Risk of Human Extinction