It appears there is a flagpole visible in the photo which leads me to believe this is the front lawn of the 1910 Holy Rosary Hospital building (now the Cornerstone Apartments). My guess is this picture was taken from the sidewalk leading to the front door of the hospital looking north toward Leighton Blvd. That's just a guess. 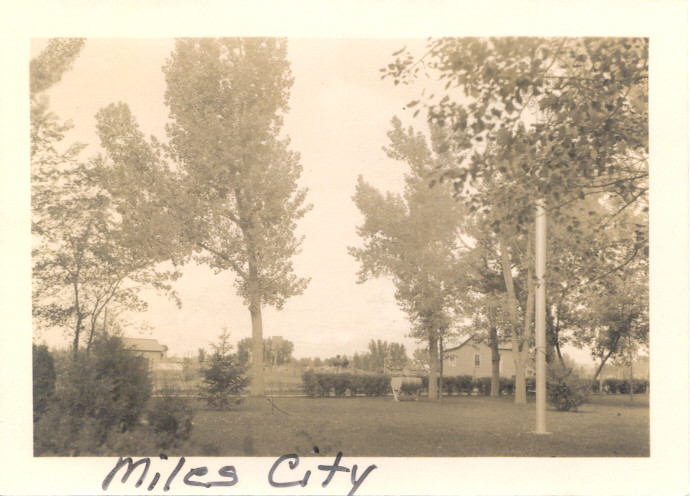 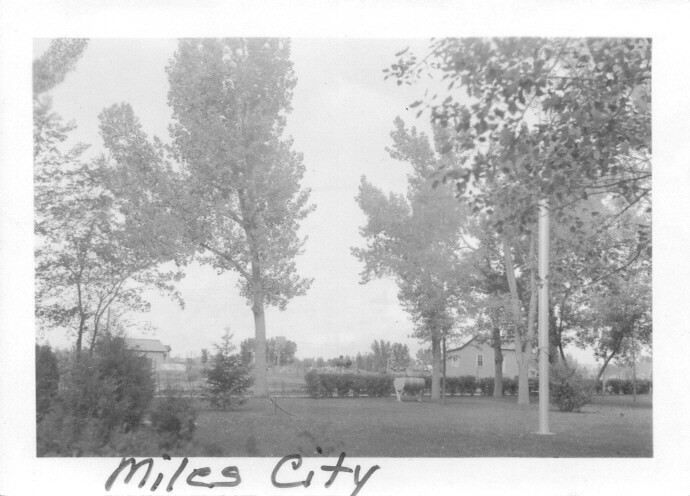 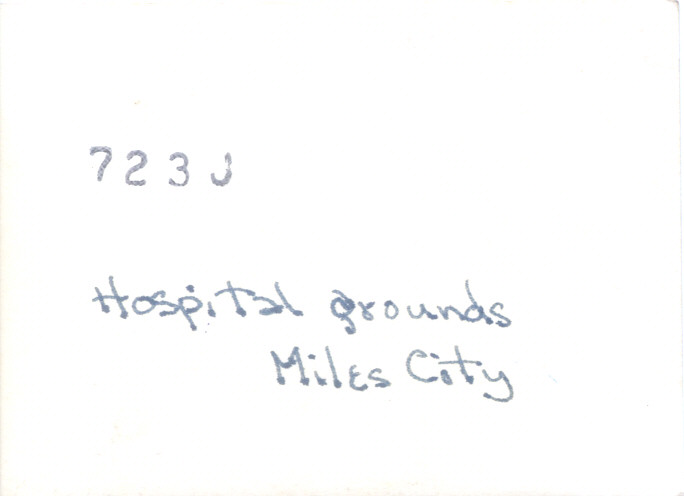 Flickr Photo: Miles City Hospital Grounds (Approx. Late 1930's) -- Reverse
permalink
Top
+0
-0
SPONSORED
moderator
founder
See the "code" stamped on the back of the photo: 7 2 3 J? Does anyone know if that is actually a date stamp that would indicate the date the photograph was printed? Perhaps the "J" is actually a poorly printed 8 or 9 indicating July 2, 1938 or July 2, 1939? Thoughts about that code?
permalink
Top
+0
-0
supporter
David...I have an old postcard of the Hospital with cars ...vintage about 1910 or so...and, the grounds are more developed...shrubs are higher, etc. Your picture looks somewhat older. I looked at the history and it was purchased by the Sisters in 1910 along with several acres for development. Just surmising!!
permalink
Top
+0
-0
moderator
founder
Hi Jeri,

The oldest building on that campus, the old part of the "Cornerstone Apartments", was built in 1910. I can't imagine the landscaping would have been very well developed when the building first opened. Also, there probably weren't many cars in Miles City in 1910.

Are you sure about the date of your postcard? 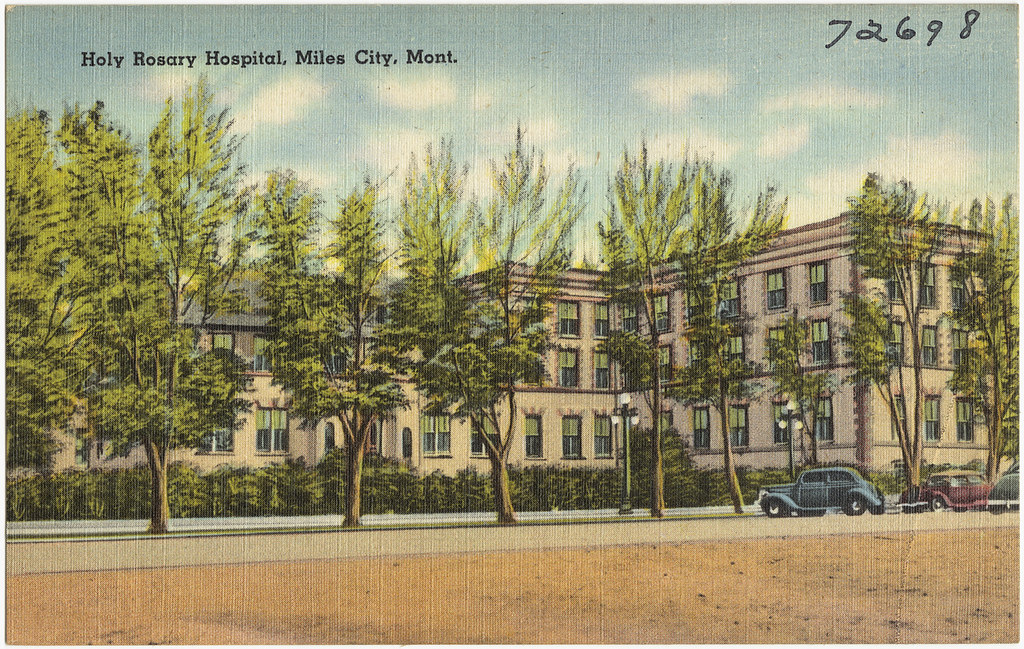 As per my hubby (born 1941, grew up in Oakland, CA), there were few, if any, mass produced cars that were anything but black way back then. (As Henry Ford famously said, you can have your car in any color, as long as it is black.) Hubby said that eventually, when he was in grade school, he noticed colorful cars... well after WWII.

Of course, as this post card looks tinted, maybe the printer took some poetic license? I am not so good with car models, maybe someone else can speak to that angle on this pic. Diana
permalink
Top
+0
-0
moderator
founder
Hi Diana,

One thing that is known is that in 1930 an addition was made to the 1910 hospital building. That addition is shown in this postcard. So this postcard picture is 1930 or newer. 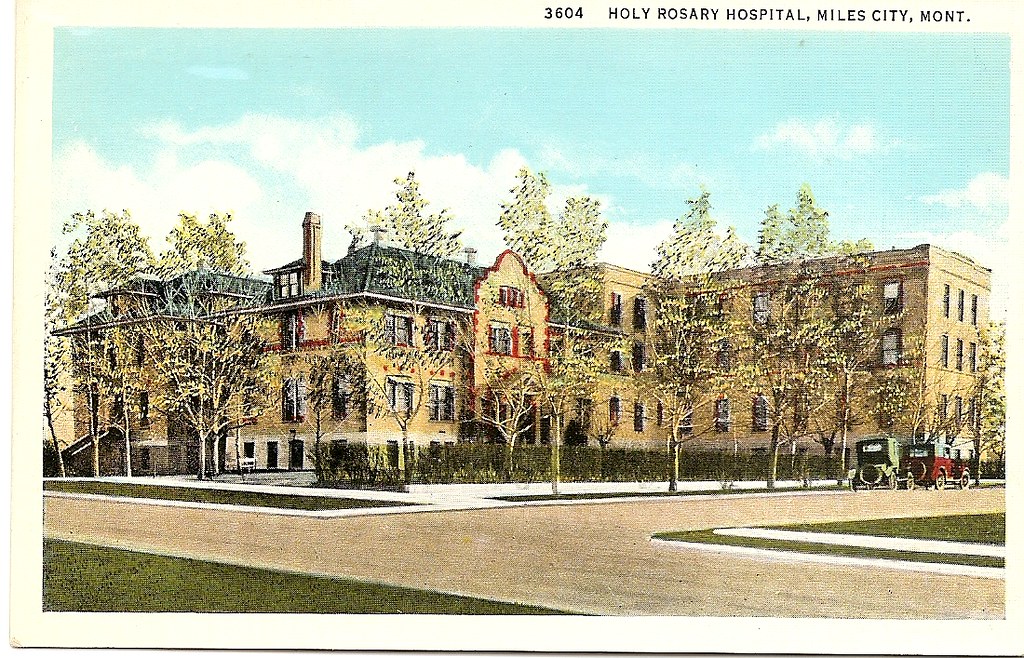 
Please advise as to what I am doing wrong. Thank you.
permalink
Top
+0
-0
supporter
Thank you, David. Notice by the side door...the tub thing and I think the flag pole as well. I am wondering if I have "share" blocked somewhere???
permalink
Top
+0
-0
moderator
founder
Here is a document about the renovation of the hospital building into the Cornerstone Apartments:

This document is what caused me to believe the 3-story/flat roofed portion of that structure was added in 1930.

If that's true, the 1930 addition is shown in Jeri's postcard photo.

That's puzzling to me. 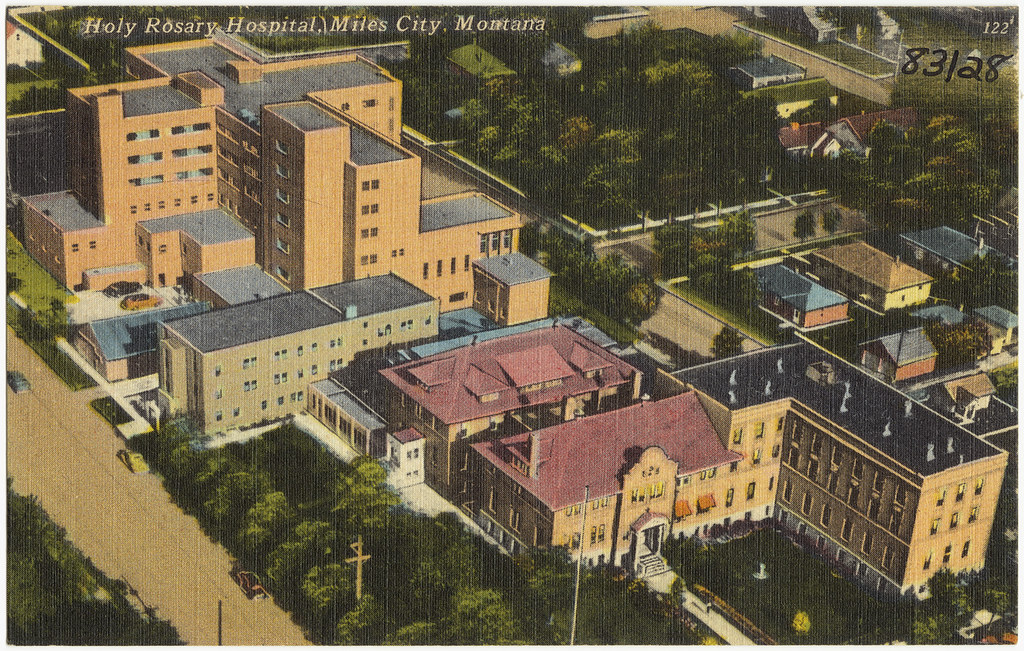 Shows a 3-story structure between the red-roofed building and the 6-story 1950 hospital building.

What is the story with that building? It looks like it could be a 1930's era building. Is that the 1930 addition and not the 3-story L-shaped building that is south of the red-roofed 1910 building?

permalink
Top
+0
-0
moderator
founder
Jeri, on your flickr photo page there is a drop down menu "Share" above the picture. If you open that Share menu, copy ALL of that text, and paste it into a message here on milescity.com the photo should appear in the posting.
permalink
Top
+0
-0
founder
supporter
When I am doing the Stardust, the hundred year ago papers sometimes refer to the "county hospital" and sometimes to the "sisters hospital." I have that photo of the first HRH labeled county hospital--and I know it was built as the county hospital and then became HRH, but the continued reference to two different hospitals has me confused.

Based on the folks who die at the 'county' hospital versus the 'sisters' hospital, I think they were being polite and not called it the 'poor farm.'

Ah, tis a mystery.
permalink
Top
+0
-0
supporter
I will try again. This is the old County Hospital. The message on the back is dated March 30, 1911. A person named Jessie is writing to her sister, Miss Leta Lesler, Altiea, Atkin Co., Minnesota. She talks about the fine buildings in Miles City and would be sending cards of the schools and the library. So..with a little luck... 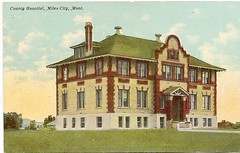 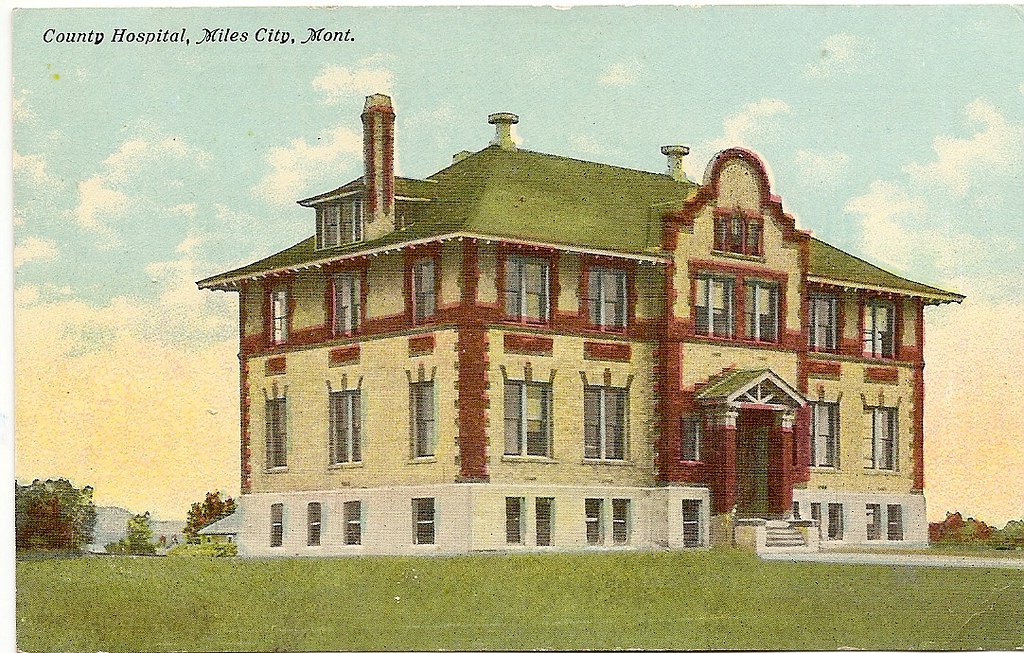 scan0008 on Flickr
permalink
Top
+0
-0
moderator
founder
Thanks, Philip. That seems more probable than the addition being built in 1930 as that EPA document seems to suggest.
permalink
Top
+0
-0
supporter
You are so smart...sure looks like it, doesn't it? The same architecture. Wow! I talked to Norma Tomm at the hospital and she just remembers that the Nuns took it over in 1910 from the RR. And...the new part was built in the late 40's. So, I am waiting on another call from a lady who is supposed to know more.
permalink
Top
+0
-0
The red roofed addition behind the original building was built in 1916. It was a laundry and nurse's dormitory.
permalink
Top
+0
-0
moderator
founder
That oldest building is described as having a green roof, which it does today. I wonder if the "red roof" was just the imagination of the artist that colorized that one postcard. It looks good with a red roof.

permalink
Top
+0
-0
supporter
I just spoke with Dorothy Zabrocki from HRH who has knowledge of the hospital and she said that the first hospital was a house on Pleasant St. Then, the RR built the hospital (must be the one with the caption County Hospital) in 1909. On 10/7/1910, the Sisters took over the hospital.
The L shape was added on in 1935 and then, they moved into the new hospital that was built to form a Cross in 1950. She has some interesting stories. Early doctors were Dr. Garberson and Dr. Boufleur:-)

I see what Amorette is talking about. Wonder if it puts you any closer to a date, David?
permalink
Top
+0
-0
I would bet if it has always had asphalt shingles they have been replaced several times.
permalink
Top
+0
-0
supporter
Dorothy also mentioned that the Sisters cared for the Prisoners that were kept at the Fairgrounds during WWII. Thinking of Amorette's mention of a poor farm? Just wondering.
permalink
Top
+0
-0
When was the three story flat roofed building between the new hospital and the old one built? That looks more like 1935.
permalink
Top
+0
-0
supporter
I can check with her to see if she knows. Just looking in Dr. Hoopes book, "This Last West", and under Miles City Hospital it reads: (YJ 1/7/82) "Miles City Hospital"; Dr. C.B. Lebscher in charge; located at the northwest corner of Pleasant and 10. Sounds like Mrs. Cooksey's house over on the corner from us.
permalink
Top
+0
-0
moderator
founder
As much as the date I was interested in getting opinions about the location of that photo... is this really the grounds of that "County Hospital/red-roofed/green-roofed" building? What direction is the photographer facing? There is a house visible that could be a clue and, if you enlarge the photo, that house has something cylindrical next to it that looks sort of like a steam engine/boiler. There is another house on the left.

The lady that sent the photo to me related this story about the photograph:

"I am the 5th generation of our family from Derry, NH, (Janice Adams Rioux) and my Mom was born and brought up in Yakima, Wa. She graduated from the Univ. of Wash. in 1938 I believe. She was Betty May Iler Adams.

My Dad is the reason she was passing through Miles City. They met and were married while he was stationed on the USS Arizona in various ports in California. He was also in Pearl Harbor on the Arizona, prior to Dec. 7th 1941. He lost a lot of his classmates that day. I have a great collection of letters from my Dad to my Mother and Grandmother while he was stationed on the Arizona, which I treasure.

Anyway, after marrying, they traveled from California to NH by car, and thus the Miles City photo. Must have been a stop along the way. I have similar photos from their stops along the way, Coulee Dam, Glacier Nat'l Park Moyie Falls, Mt., Mt. Rainier, N. Dakota Bad Lands, Anaconda (?)The Mississippi, Lincoln Memorial, Declaration of Independence, Washington DC, etc.

So, I guess that is a little history behind the picture."
permalink
Top
+0
-0
supporter
Dorothy said the hospital was originally called "Cornerstone" and was on Clark and Leighton. Renamed Holy Rosary after the Feast of Holy Rosary...if I recall correctly. David..did you notice that barrel thing up closer to the building on my first postcard with the L? It is near the steps on the end. I think the flagpole is there too. I asked Dorothy to take a look to see if she could tell us more.
permalink
Top
+0
-0
supporter
New information: I just talked to Dorothy and she and Clyde looked at the pictures. The first red roof building that we have by itself and called the County hospital...belonged to the Railroad and that is where their CEOs stayed when in Miles City. They moved out and that became the hospital when the Sisters took over and they built the L shape.

The picture with all the buildings...the first red roof building is the one I mentioned above. The second was the Sisters' quarters and the nursing school. The gray roof, 3 story never existed...the picture is an artist's rendition of what it could be. (as per Clyde Leischner)..the little single story would have been radiology.

Also..Dothothy said that the name Cornerstone is not correct.

David..they looked at your picture and were not sure about it.
permalink
Top
+0
-0
moderator
founder
That's funny that the one 3-story building is just a myth.

You didn't get a chance to ask Clyde about the half-barrel water trough, did you?
permalink
Top
+0
-0
supporter
I actually talked to Dorothy who had gone over the thread with Clyde and they had not a clue. She actually thought it was a cow but had not looked at it closely:-) Maybe it was for water??? Don't you think the shrubs kind of have a pattern?
permalink
Top
+0
-0
moderator
founder
Before Ms. Rioux mailed me the actual photograph (which is only 2.5" x 3.5" itself) she sent me a scanned version that was pretty small. Based on that small scan I thought the water trough was a cow too. I figured that was why they took the picture, "Look there's a cow wandering the hospital grounds of this small Montana town."

My vague recollection of that hedge in later years is that it pretty much surrounded the entire front lawn area of that "1910" building -- extending along both N. Jordan Ave. and Leighton Blvd. The photo could show the Leighton Blvd. hedge in its early stages. The hedge along N. Jordan Ave. (which is featured in your and other postcards) is not really visible. It would be to the photographer's left.

Take a look at the house that still exists at 2107 Leighton Blvd. This house was built in 1927 according to zillow.com. Do you think this is the same house that can be seen in the photograph? 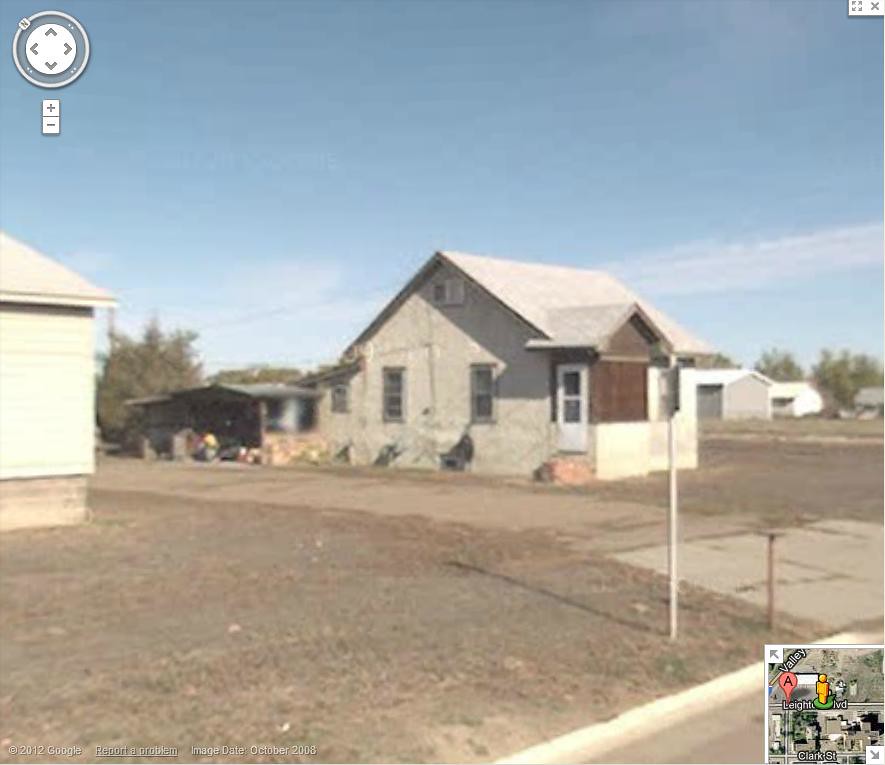 I have marked with a red X and line my theory on where the photographer was standing and in which direction the photo was taken.

It's just a guess. 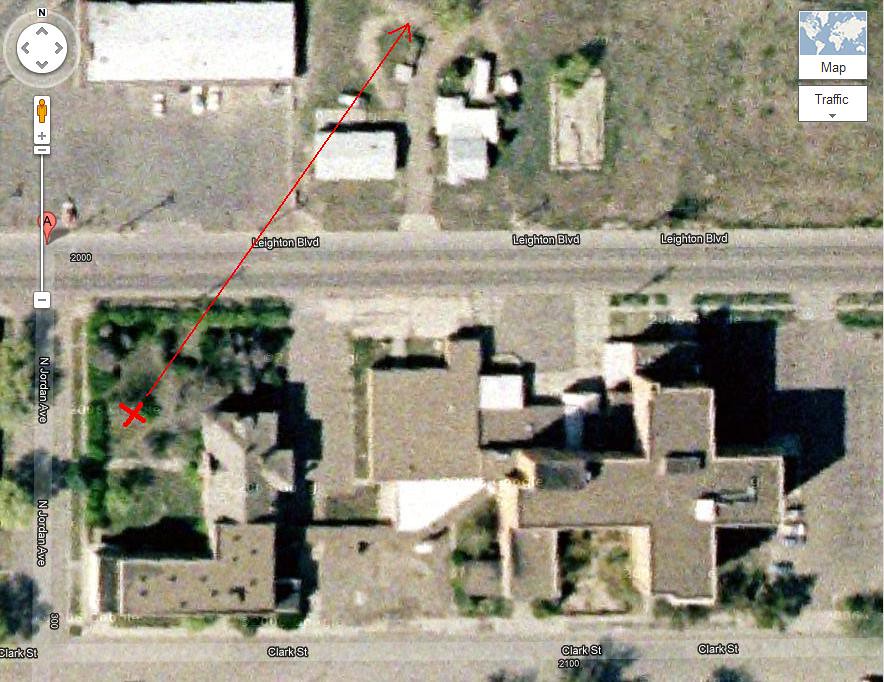 Old Holy Rosary Hospital Campus, Miles City by dave_mcmt, on Flickr
permalink
Top
+0
-0
SPONSORED
supporter
That is definitely the house in both pics. The old and then the one you just posted. You can see the windows, etc. and, it really looks like you have the angle as well. Very interesting and amazing. Also, an interesting transmittal from the previous picture owner. It has been fun...I learned a lot today. Thanks for putting that on mc.com:-)
permalink
Top
+0
-0
Post new topic Reply to topic
Running Club in Miles City?
Custer Rod and Gun Club Annual Banquet and Meeting