Carnegie Public Library - MC, MT?
Dan Mowry
Bridgier
Richard Bonine, Jr.
Dan Mowry
Hal Neumann
Gunnar Emilsson
Amorette Allison
Dan Mowry
Jeanne M Bole
Post new topic Reply to topic
supporter
I was given a book that is stamped "From S. Fred Cale Fund 1929" and has a punch-out set of lettering (tiny little round dots punched through the paper) that says "Carnegie Public Library Miles city, Mont." There's a very faded sticker that says "Giveaway Cart" and some initials that look like either "IL" or "LL" ...assumption is they are a person's name initials but not sure.

I've never heard of the Carnegie Public Library nor any idea when/where or what it looked like or if it was a rename, current name?

Any ideas?
permalink
Top
+0
-0
SPONSORED
supporter
Isn't the Miles City library a Carnegie Library? I could swear there's a plaque or something with the old robber baron's face on it there somewhere...
permalink
Top
+0
-0
supporter
It is where the library has always been. Not sure when they added the front part. My guess would be in the mid-60's. 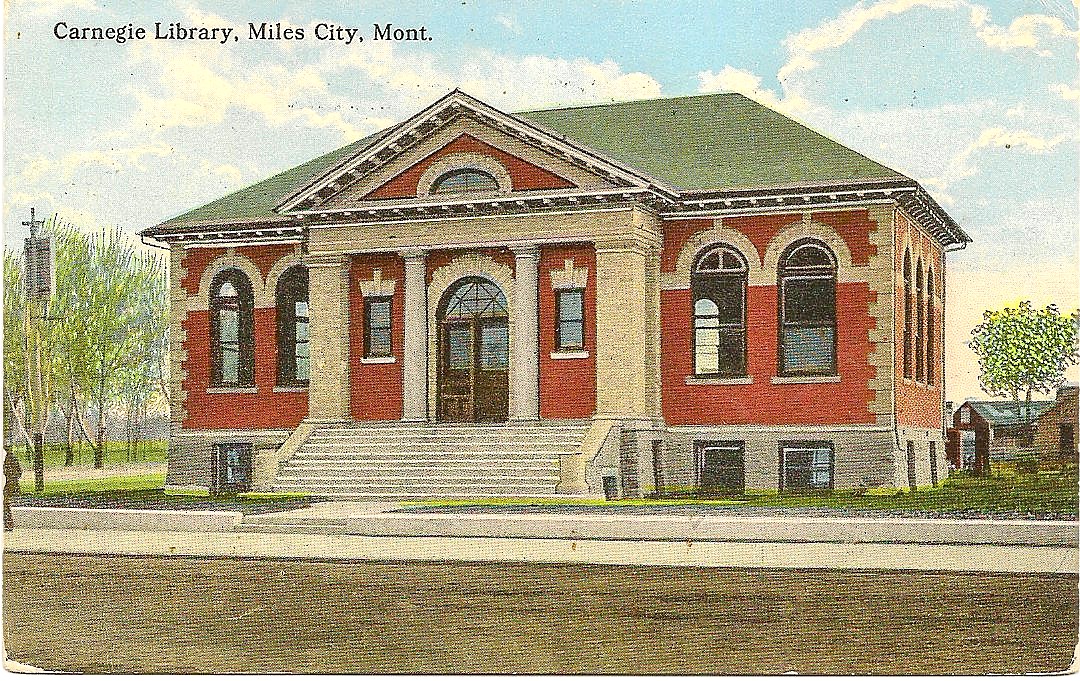 I wonder if we have just reduced the reference to "Carnegie" over time (which would be a shame) or if there was a renaming at some point - perhaps when the addition was made?
permalink
Top
+0
-0
founder
supporter
sponsor
http://milescity.com/foru...all#111597
permalink
Top
+0
-0
supporter
Just curious....my parents lived on Cale for many years...was this street named after "S. Fred Cale"?
permalink
Top
+0
-0
founder
supporter
1) The old part of the library was built as a Carnegie Library.
2) I believe the addition was c.1964
3) The name was changed because except for the original $10,000 in 1902, the Carnegie Foundation had contributed zip to the place. It was about the time the addition was made.
4) Cale was named after S. Fred. His farm was out where Cale is. The street was Winchester first, then a section named Cale, which made it confusing. The Winchester was Lorenzo Winchester Stacy's son Winchester.
permalink
Top
+0
-0
supporter
Thanks again so much for the great info!
permalink
Top
+0
-0
SPONSORED
supporter
Hi Ammorette,
I know your are not old enough to remember this could you find out when during WWII we had a blackout in Miles City I can remember mother covering the windows with bedsheets.We lived in a apartment
hooked onto a garage and my dad got a great deal no rent if he would
get up during the night and let truckers drop their trucks off. Needless to say it didn't last long. there was a Black Family that
lived across the street from us and I remember they invited me to dinner. To make a long story short I would love to know the address
of that house/garage and when we had the blackout.
Thanks for any help you can give me.
Jeanne M Bole
permalink
Top
+0
-0
Post new topic Reply to topic
Lost Kitty...
Question about the Ash Creek Fire