She didn't wait for Montana metro editions to lead the way or for the inevitable groundswell of outrage to rise up from political blogs around the country. She dropped the hammer, once the facts were verified, in service to that journalistic creed of "comforting the afflicted and afflicting the comfortable", on Monday afternoon.

You could successfully argue that Miles City has a special interest in pushing back against this kind of inflammatory political hate speech after the similarly rank display of a noose at the Custer County GOP booth during the fair in 2009. Then, as now, the pranksters and their sponsors shrugged off their maliciousness as a misfire of local humor. The chair of the Montana Republican Party, Will Deschamps, is quoted as saying that the stunt was a "sideshow" that he has no intention of "agonizing over". I guess we'll see about that.

Mr. Deschamps should be fired immediately and the editor of the Miles City Star, Marla Prell, should be commended the next time you see her.
permalink
Top
+0
-0
SPONSORED
supporter

permalink
Top
+0
-0
supporter
I so agree...Thank You, Miles City, Star...this was on my FB page this morning.

This is an interior shot of the outhouse. Anyone know who the gentleman in the photograph is? 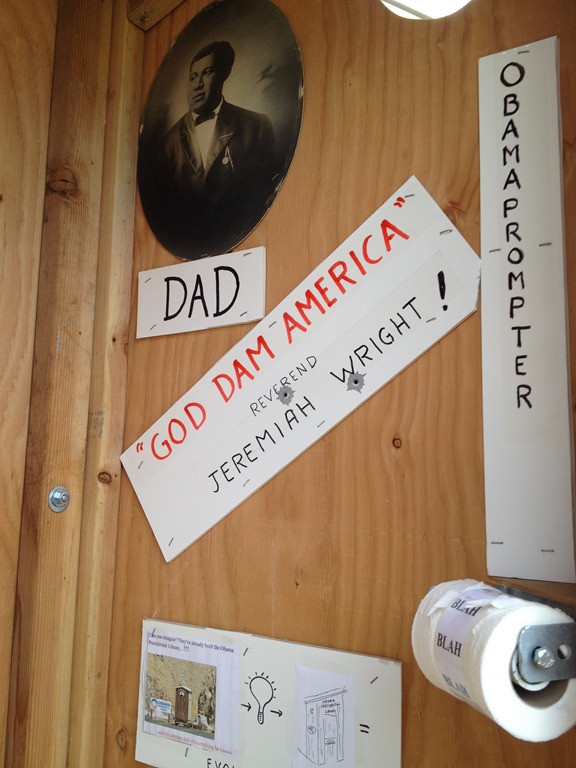 Of course, he could do it, as he is all-powerful....but why?

Plus, it would be a major engineering challenge....rivers flow in all sorts of directions, and there are uncountable drainage divides.

Can someone explain to me why God would dam America?
permalink
Top
+0
-0
supporter
If the designers put the "N" in the word "dam" then they would feel REALLY bad about what they did.

They just coverin' thems ownz butts
permalink
Top
+0
-0
supporter
What a bunch of neanderthals! Sometimes I wonder where in the world people like that came from - then I see them standing next to their parents with their children in tow. Disgraceful!
permalink
Top
+0
-0
supporter
Marla Prells rebuke was strongly worded and I too thank her for the timely, appropriate response. There may not be words strong enough to fully denounce this outrage on so many fronts.

Does anyone know what Rep. Rehberg had to say about this?

The reality is, as humans we share 99.9% of the same goals and dreams for ourselves and our families, but we let politicians play slight of hand games so they can rob us while we argue issues of morality. When I don't hear about God, guns, abortion, or homosexuality when we talk politics, I'll fade completely away and be forgotten. I'm not even a real person, I'm only a manifestation of all that is wrong in the world.
permalink
Top
+0
-0
supporter
Can anybody tell me who the man in the photo is and why it's an insult to President Obama to call him (the man) Dad?
permalink
Top
+0
-0
supporter
You're probably over thinking it. They couldn't spell "damn".
permalink
Top
+0
-0

That depends, Static. I'm certainly capable of it. Incidents of bigotry, misogyny...

Politically, I fall between Levi and Bridgier

What axis are we using here?

I'd also be interested in learing from static exactly where the Occupy Wall street group and Roseanne Barr fit into the official Democratic Party hierarchy. (Hint: they don't)

There happens to be a coincidental correlation between people I call dumbass and conservatism.

Thank you, Buck, for another shining example of something that contributes absolutely nothing positive to political discourse. Maybe you are right, maybe we do share 99.9% of the same goals. But if this is how you conduct yourself regarding that other .1%, well, you are not helping anything in any way. I would rather sit down and have a debate with someone that was against everything I believe and behaved like a civil and respectful person, rather that sit with someone that was 100% aligned with my views if they acted like you, Buck.
I know that me saying this is not going to make any difference, but if that sort of negativity and hate is all you bring to the table, well....it is nothing to be proud of. Wait, is this one of the examples of the lefts 'we need to be tolerant and accepting of everyone's ideas, unless they don't agree with me.

TL,DR: People 100% in agreement with what I believe but act like Buck = Douchbags that do nothing but harm political discourse. People that are 100% opposed to me but conduct themselves well, with respect to others and their opinions, that do not fall back on middle school name calling = probably a decent enough fellow and one I would gladly sit down and discuss the fate of the world with.

Another TL,DR: Buck, you should be ashamed of yourself. People like you do nothing but hurt any discussion.
permalink
Top
+0
-0

I'd also be interested in learing from static exactly where the Occupy Wall street group and Roseanne Barr fit into the official Democratic Party hierarchy. (Hint: they don't)

I did not say democrat...you did. I said left. Not always the same, like how republican doesn't always equal someone from the right(newt!) And I am pretty sure that Roseanne Barr is from the left.
But, since you brought it up, here is a video of several prominant democrat lawmakers supporting OWS. http://www.youtube.com/wa...8UtYQ2zKmk
permalink
Top
+0
-0
supporter
I'm really in no mood for this today.

Where was the outhouse that we were talking about? At a function for the REPUBLICAN PARTY.

Who gets to propose legislation and policy and vote upon it? Elected officials, including ELECTED MEMBERS OF THE REPUBLICAN PARTY.

How many seats in congress or the state legislature does Occupy Wall Street control? NONE

What position does Roseanne Barr hold withing the Democratic Party? NONE.

ARE YOU STARTING TO UNDERSTAND WHY WHAT YOU ARE SAYING IS A FALSE EQUIVALENCE? Probably not.

And Static, I'm manifesting really procreateing hard right now. Every time a bell rings or an idiot writes a lengthy post about civility that includes the terms "douchebag" or "you people", I oil up my big, black muscles and sleep with a white woman.
permalink
Top
+0
-0
I think maybe I should clarify. In my first response, the 'buck' I was referring to was the OP, Exalted Buckaroo. Not that it makes any difference at this point.
Buck, Bridgier, thank you for so much. This has been very entertaining.
Buck: You call me a dumbass because I am conservative. I call you a douchbag because of how YOU act. Would you call all homosexuals dumbasses because what some of them do? No? Why does that apply to conservatives? I must not be a very good conservative then if I don't hate gay people, or don't hate all Muslims because of the radials. I guess I better take some lessons on bigotry and prejudice. Are you free for lunch anytime soon Buck? I think I could learn a thing or two from you(about how not to act) And I am not sure where you get the 'you people' thing from. Maybe you are referring to when I said 'people that act like buck'? Not exactly a 'you people' type of statement, but you tell yourself whatever you want.
Bridgier: Wow. That was funny. Just because someone does not hold an elected position within the legislature or a party makes them irrelevant? I have no doubt, whatsoever, that if someone from the tea party did something really stupid(just think something along the lines of the OWS violence) that the the entire right wing would be held accountable. No, the examples I gave are not representative of the entire left wing. But it is hate, and it comes from the left. That was my original question. It was about hate from the left. Not about hate from the democrats, hate from within the govt, etc. Hate from the left. And the examples I gave are most certainly from the left.
Again, thanks for the laugh, that was 'procreating' funny.
permalink
Top
+0
-0
supporter
Oh, you were born a dumbass? My mistake. I definitely can't hold that against you.
permalink
Top
+0
-0
supporter
moran.
permalink
Top
+0
-0
moderator
founder
And that old portrait of a black man taped to the inside of the outhouse wall with the word "Dad" taped just underneath isn't meant to be racist. That came from his father-in-law's old secondhand store.

"It's just a picture," he said. "There's nothing racist about it. It doesn't say Uncle Remus or anything like that."

The Billings Gazette: 'Obama Presidential Library' creator says outhouse 'meant to poke fun'
permalink
Top
+0
-0
supporter
Getting irritated with stories linked here to the Gazette that I can't read because they want money.

permalink
Top
+0
-0
supporter
The guy who was responsible for the outhouse has been outed. One David Hurtt, a teabagger from Florence, actually seems proud of this miserable piece of political theatre!

I must not be a very good conservative then if I don't hate gay people, or don't hate all Muslims because of the radials.

What do tires have to do with anything?
permalink
Top
+0
-0
Post new topic Reply to topic
Sidney animal rescue?
Does anyone know