Shame on you Federal Judge Cebull
Kacey
Steve Allison
Former
Bridgier
Amorette F. Allison
Mary Bonine
Dona Stebbins
Former
Amorette F. Allison
Former
Denise Selk
Levi Forman
Bridgier
Former
Bridgier
Denise Selk
Levi Forman
Bridgier
montanajane
howdy
Kelly
montanajane
Mathew Schmitz
tax payer
Levi Forman
Kacey
AshleyDawn
Kacey
Post new topic Reply to topic
http://www.ktvq.com/news/...ate-email/
permalink
Top
+0
-0
SPONSORED
Something to keep in mind as you consider how relevant this is, he just opened every case he dealt with involving blacks, hispanics or native Americans, to being appealed on grounds he may not have given them a fair trial. This could end up costing all of us hundreds of thousands of dollars. If the man can not think before he opens his mouth or clicks reply all, he should not have the job.
permalink
Top
+0
-0
Hmmm...

Its in poor taste - but he sent it to a few friends in private - and it isn't like he wrote the joke.

Steve makes a great point, though.

It was in "extreme" poor taste.

The "racist" component of the joke, and there is one, is the inference that the President is "white."

The bit about "barking" has absolutely nothing to do with race - it is a red herring. It speaks poorly of the President's mother's character, perhaps - but nothing of race.

So no, this was not an "extremely racist" joke as far as racist jokes go.

It was in very bad taste.

The thing is bad enough as-is without trying to make it something that it is not.

[This message has been edited by Former (3/1/2012)]
permalink
Top
+0
-0
supporter
To quote The Polish Wolf from Montana Cowgirl Blog:

It's racist because it is suggesting that a white woman who would have sex with a black man must be so drunk that she would also have sex with a dog. Specifically, it is suggesting that a relationship between a white woman and a black man couldn't come about through the normal reasons - attraction, friendship, compatibility - but only through a lustful, drunken hook up. It's less about obviously attacking a race as attacking the idea that people from two races getting together is comparable to a person and a dog.

So, yes, it is racist and sexist. And disgusting. And the judge is a moran
permalink
Top
+0
-0
Ok, ok, I admit defeat.

That is reading waaaay more into the so called "joke" than I did. For what its worth.
permalink
Top
+0
-0
supporter
We made the national news...

So proud!
permalink
Top
+0
-0
supporter
I have to agree that that joke was not racist. It is an insult to Obama's mother, but not racist. Still not smart to be forwarding around such things at work. It's also not funny, but that's true of about 90% of the "humor" going around the internet.
permalink
Top
+0
-0
supporter
Not to re-open old wounds or anything, but I think some people around here need their racism detectors adjusted, or their hair-splitters re-tuned.

DISTINCTION WITHOUT DIFFERENCE PEOPLE.
permalink
Top
+0
-0
If the joke were the redhead asking her blond mother why she's a redhead, and mom is just glad that she doesn't bark... is that an affront on redheads?

"Clearly, someone who would sleep with a redhead would also sleep with a dog, says the joke, and only if very intoxicated."

That said, the Judge himself said that the joke was racist, which shows his intent, and I will not be sticking up for him any further.

(Although, I still didn't read that much into the sorry attempt at a joke)
permalink
Top
+0
-0
supporter
So basically, if it was a joke about something completely different, it would be something else entirely?

I thought we'd managed to leave the Age Of Logical Fallacy behind with the absence of Rick.
permalink
Top
+0
-0
supporter
His lack of good judgment is apparent. He has presided over how many cases involving the prosecution of people with child pornography on their work computers? He, more than just about anyone, should understand the complete lack of expectation of privacy on your work computer. Just plain stupid.

And what kind of friend would send that to your work e-mail, when you are in his position, anyway? Use the personal e-mail. Geesh.

[This message has been edited by Denise Selk (3/1/2012)]
permalink
Top
+0
-0
supporter
FWIW, I thought Richard's joke the other day was clearly racist. This one only is if you read in something that's not expressly there. Since the judge called it racist, he probably meant it that way. Also, I see nothing wrong with Former's example. It's exactly the same joke.
permalink
Top
+0
-0
supporter
Except that he took the racial element out of it. Other than that, I agree with you totally.

[This message has been edited by Bridgier (3/1/2012)]
permalink
Top
+0
-0
supporter
Sorry Amorette, I have to do this! It would be moron not moran! I am surprised no one has said anything yet!
permalink
Top
+0
-0
supporter
Montanajane, saying moran instead of moron on this site, is a long standing tradition dating back to a picture of a tea party member holding a sign, spelling it that way...it is done on purpose... 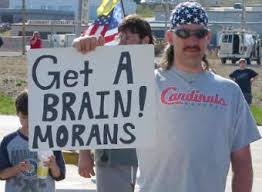 Except that he took the racial element out of it. Other than that, I agree with you totally.

It has a racial element, but it isn't pejorative, mocking, or stereotypical towards that race, so I wouldn't call it racIST personally. It is disgusting, unfunny, and lame though, which is enough.
permalink
Top
+0
-0
http://www.ktvq.com/news/...rd-cebull/

We will find out how law abiding the Judicial Council is now.
permalink
Top
+0
-0
Steve high fiver on that post!
Couldn't agree with you more.
This is a Federal Judge for us we're talking about! The level of inappropriateness of this is embarrassing for anyone that recognizes it and is living in the ol' last best place.

Then again poop stain is poop stain and look where he's at.
Im worried, actually. About some of this sh**.
permalink
Top
+0
-0
SPONSORED
Call for impeachment!

From KTVQ today:
Several advocacy groups and lawmakers have called for Cebull's resignation, but the judge will probably not face any harsh punitive action, said CNN legal analyst Jeffrey Toobin.

It's rare and generally very difficult to force federal judges from office. They receive tenure, and the Constitution guarantees they can remain on the bench during good behavior.

The standards for removal are not clear, beyond a violation of civil or criminal law. Congress would have to initiate impeachment proceedings, but the few judges to face that have usually resigned before an outcome.

"The problem is there is almost no remedy for judicial misconduct except by impeachment by the House and removal by the Senate," Toobin said.

And in Cebull's case, while the e-mail was out of line, it just wasn't enough of a big deal to warrant removal, Toobin said.

"All that can happen is he can be embarrassed," he said.
permalink
Top
+0
-0
Post new topic Reply to topic
For fans of Van Eky
Hey Hey Were The Monkees