Hotel Ingham
Joey Schipman
Judy24
Buck Showalter
Fred South
Cindy Stalcup
David Schott
David Schott
Amorette Allison
Gene Larson
Joey Schipman
sdrew
sdrew
Butch Cain
Gunnar Emilsson
Jay Johnson
Nancy Drew
Lance Bredvold
Don Thompson
Cheryl Gaer-Barlow
Amorette Allison
Cindy Stalcup
David Schott
David Schott
Amorette Allison
Dona Stebbins
Gunnar Emilsson
nativemc
Don Thompson
Don Thompson
Wayne White
Post new topic Reply to topic
I have an old deck of cards from the Hotel Ingham; Edith Slack, Manager. Does anyone know where this hotel was and when it was in operation? Just curious.
permalink
Top
+0
-0
SPONSORED
I think I remember it was out on the road going out to the valley.
permalink
Top
+0
-0
supporter
The Gingham Lady? Classy joint.
permalink
Top
+0
-0
The Ingram Hotel stood across the street from the side of the 600. I walked passed it nearly every day going to work and remember the beautiful chandelier. It was a brick building, as I recall.
permalink
Top
+0
-0
In the 20's it was advertised in the Auto Blue Book as a place the auto traveler could get "your icy-hot bottle" filled at the Ingham Hotel's-- Ingham hot showers & bath tubs. It was advertised with Shuey's Motor Company-- the largest & best equipped repair shop in Montana. I don't know if the icy-hot bottle was a thermos for the traveler or water for the auto's radiator.
permalink
Top
+0
-0
moderator
founder
"Ingham" or "Ingram"?

The building Fred South is referring to must have been the one known as the ElRobo Building in later years. It was located on the southwest corner of Sixth and Main St. It burned to the ground in about 1983.

The Gingham Lady Motel was located on old U.S. Hwy 10/12 (Valley Drive East).
permalink
Top
+0
-0
moderator
founder
Here, from this site's "Gallery", you can see a photo with a "Hotel Ingham" sign in it. The sign is mounted on the building (the "El Robo Building" in later years) that was located at Sixth and Main St:

permalink
Top
+0
-0
founder
supporter
Ingham. It was open until the 1960's, I believe. Yes, you came in through a door on 6th street and it was upstairs.
permalink
Top
+0
-0
founder
supporter
If the clock in the photo above (below the "Ingham" sign) looks familiar, it is now across the street from its orignal location at Club 519. And the clock is set at that time (5:19).
permalink
Top
+0
-0
Thanks for all the information. The cards actually belong to my husband. He is the gambler in the family. We bought the cards in an antique shop in Glendive and just wanted a little history on the hotel. I knew this site was the place to go. Thanks again.

permalink
Top
+0
-0
I remember going there to pick up my aunt when she came up from Wyoming every summer to visit.
It had beautiful woodwork and our mom woul let us get a gumball from the dispenser that sat on the counter.
I remember it as beautiful.
And yes, you entered from 6th Street.
permalink
Top
+0
-0
sorry-the "d" sticks on my keyboard!

permalink
Top
+0
-0
the hotel was still open in late 60; or early 70;s as I stayed there will working on the post office, I believe the manager was Buzz Hutcherson at that time . I believe it was a saloon after that, call the black Bull.
permalink
Top
+0
-0
supporter
Damn, Main Street sure was impressive looking in the old days.

Seeing that picture makes you just want to fold your hand, and let the buffalo take over again.
permalink
Top
+0
-0
The building that the Hotel Ingham sign is on was the Miles City Bank as shown on the clock . If you look closely you will notice that the Hotel Ingham sign is an arrow pointing to the left. The hotel was in a building behind the bank. There was another building between the bank and the hotel which in the 50's was occupied by Dr. Hadlee, an Optometrist. My Dad was a clerk at the hotel for a couple of years in the late 20's. It was owned by Bill and Mabel Ingham.
permalink
Top
+0
-0
supporter
I recall Dr. Hadley still being around in the 60's...but maybe switched office sites.
permalink
Top
+0
-0
Yes. In the summer of 1965 I visited Miles City and met the gang of mostly educated bachelors who hung out with Howard Anderson at the Miles City Ready Mix. Doc Hadley was around regularly as were Brud Foster, and Glenn Bredvold. Knowing I was heading west, they recommended Highway 95 in Washington (I'm not sure that was the correct number but it follows the Snake River and has that high overlook of Lewiston Idaho). Doc Hadley raved about Morro Bay, California and so I checked that town out as well in my 1964 Mustang. The only time I ever owned a car which turned girls' and guys' heads.
permalink
Top
+0
-0
My grandfather, Sam Thompson, was a clerk at the Ingham Hotel from the early 1950's until near the end of his life in 1964. Edith Slack was the owner of the hotel. Every Christmas a very tall Christmas tree was erected in the hotel lobby and my grandfather kept a supply of candy canes hanging from its branches which all of us kids reached out from the second story staircase landing to retrieve. Behind the desk was a large telephone switchboard complete with lights, connecting cords, and buzzers which Grandad operated to connect guests with outside callers. The coke machine along the back wall (10 cents) was always filled with the coldest and sweetest cokes I ever drank (Grandad always had a few dimes in his pocket). A large tinted photo of Jesse Stahl, a black cowboy, riding a horse called Glasseye at the Salinas, California rodeo in 1913 hung near the front door. An old large grandfather clock ticked away the hours on the north wall. The lobby furniture was all fine leather and wood. An oilman named Tuffy Ferris had a small office in the lobby. In the basement were a few large rooms which Grandad said were specially reserved for traveling salesmen to display their wares to local merchants. Sometime in the late 1950's, a black couple from back east stopped in Miles City and tried to get a room. Nobody in the other hotels in town would rent then a room. Without a second thought, Grandad rented them a room at the Ingham. In about 1957, my brother, Barry, and I, while snooping around in the basement, discovered that the north wall separating the Ingham from the Miles City Bank consisted at one point of just a series of closely spaced bars. The installers of the bars had set them close enough together to keep any would-be adult bankrobbers from squeezing through from the hotel into the bank. They must never have figured that a couple of skinny 8 year old kids might try to get through. Barry and I made it. Actually, we made it into the large wide open vault inside the bank's basement before we lost our nerve. To this day we often wondered how we might have gotten ahead early in life if only we had found more courage while in that bank vault. With no sign of forced entry, the bank management would have guessed that the robbery could only have come about as a result of "an inside job!"

Unfortunately, both the Ingham Hotel and Miles City Bank as well as the CrossRoads Inn east of town were burned to the ground in the 1970's or early 1980's by a Miles City kid, Pat Cain, who lived just two blocks from our house on the north side of Miles City. Pat spent some time in prison for the arson and I met him years later when he was a grounds keeper at a Billings golf course. Pat died a few years ago. 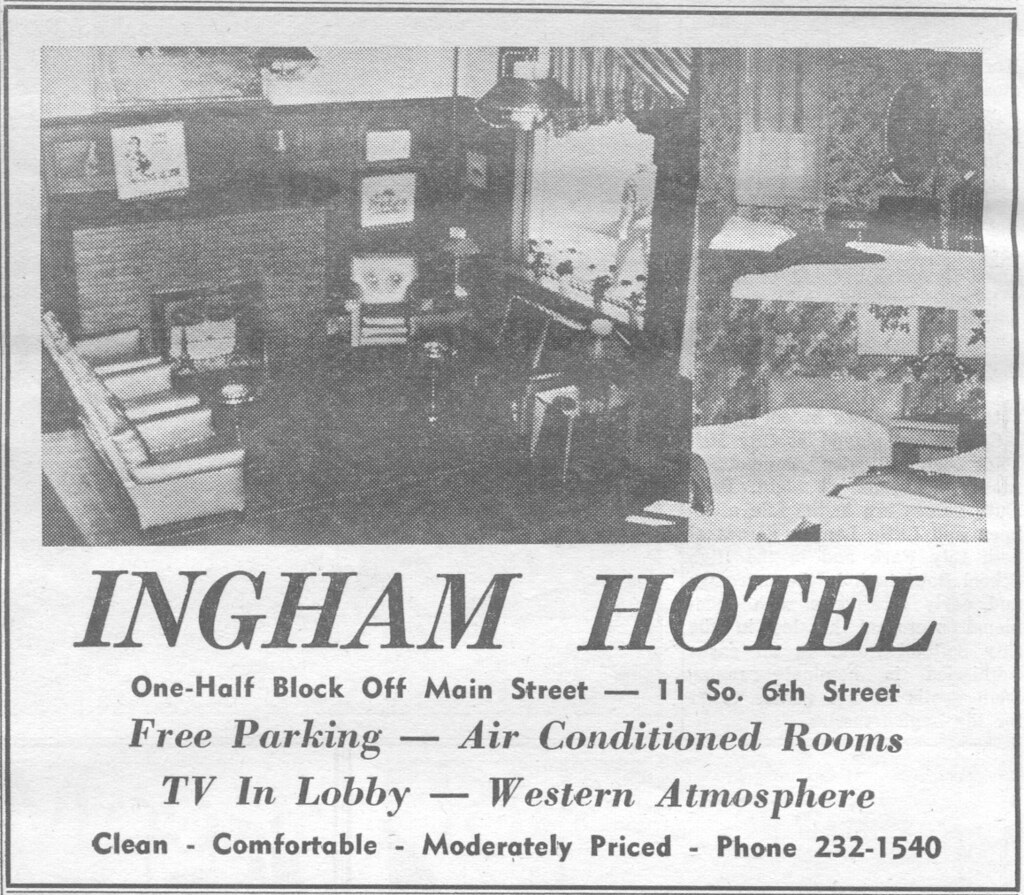 I was passing on information that I had heard over 25 years ago. If I am in error, I apologize. I am in the process of trying to edit my story to remove those remarks.
permalink
Top
+0
-0
SPONSORED
Wow, I got my first pair of glasses from Dr. Hadley, in 1955, even remember going to his office, in or by the Ingham.
permalink
Top
+0
-0
Post new topic Reply to topic
Windows 8
Girl Scout Registration